We homebrewers typically use carboys or buckets for our fanciful fermentations. We all have our favorites and no shortage of strong opinions.. 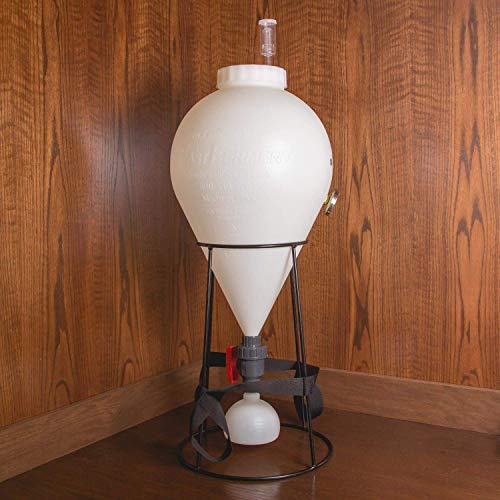 A quick recap of the commonly used fermenters.

I have always used carboys both large and small, glass and plastic. But I recently got the chance to check out a new option!

The FastFerment. An affordable, conical shaped fermentor available from most homebrew shops.

I wasn’t sure how I felt about this new-fangled gadget. (When did I become an old fogey??)

I spoke to a few respectable homebrewers in my local club and at my local store before I received it and I felt like they all overhyped it. It couldn’t be that amazing… If you check out the website it is mostly high praises. (But hey, why wouldn’t they post those reviews?)

How could this thing beat the tried and true buckets and carboys? I was prepared to be underwhelmed. I am a skeptical person. Whomp whomp whomp…

The way it arrived to my apartment was not promising. The box was very poorly packed. Lopsided, and bulging in spots.

I took everything out and assessed what I had been given. Poor packaging had not damaged any of the product. Phew.

I did find it was missing one little piece. A grommet for the lid where the bubbler fits in. Not a big deal, and I swiped one from my bottling bucket lid (I rarely use it anymore).

I didn’t care for one of the o-rings that came with the lid. (There were two in the box, why? Not sure).

The one that was inside the lid was an odd spongy/papery material that did not feel like it would help seal the lid. (Imagine a squished packing peanut ring.) The other o-ring was round, much thicker, and more rubbery. We chose to use that one instead, with success. (We were also given a flat, silicone ring for the lid by a local homebrew shop but have not tried it yet).

[Side note: I have been brewing for a few years now and I did not necessarily need the full set. Of course, the most financially savvy option is to buy the whole kit and caboodle. I now have multiple spoons and cappers, along with a few other items that are nice to have but I just did not need.

Especially since I live in a small NYC apartment!]

Ok, I got it out of the box, and it is all rinsed and cleaned, so what’s next

Let’s put it together!

First things first, you have to tape all the threads on the thermowell and joints. It was great the tape was included because I had to use quite a bit! I will say, the directions suggested two to four wraps. I tried that the first time and it just did not do it for me. I recommend trying four to six wraps for extra security.

The next step was installing the spigot. This is an optional piece. I really like this add on, but I wish they would have done it for me! (That might just be me, being lazy).

The measuring and the drilling should be done very carefully! Once there is a hole there is no going back. I am still worried that I might have touched the inside with the bit and made a microscopic dent. No issues yet, but I will let you know!

An aside: what the hell am I going to do with this bit? I have no other use for it. Ideas?

The next move is to attach the bulb with the Union valve to the bottom. While attaching the Union valve I was disappointed that my hand tightening skills were just not enough.

(Note: I do have weak wrists, like so bad that I could not open doors as a toddler). I never enjoy it when I have to call upon my better half to tighten shit for me. I want to be self-sufficient!

Ok bulb on. Next…

Make sure you start the leak testing process before your brew day. (Oops). The whole thing put together should sit full of water for two to four hours to make sure there are no leaks (according to the directions).

We ended up on the shorter end of that time frame. For something as disastrous as a leak during fermentation, I would like to be 100% sure.

The last piece to put together was the floor stand. We decided that was a better option for us than the wall mount. It can be moved around and I don’t specifically want it hanging on our living room wall (again, small NYC apartment).

It was a pain to set up though. This is a project that needs two sets of hands. The screws did not line up well with the holes. Also, there was no allen wrench included. Most people have these at home; it is required for setup.

How was the actual process?

There are a few ways to fill up the FastFerment at the end of your brew:

We went a touch overboard with our first fill, the second time we used the FastFerment we cut the filter and funnel but got the pump fixed and working!

It is a fermenter after all!

The worst part of the whole day was setting up the temperature control jacket! It is NOT a one person job. I tried SO hard to get it set up by myself.

Don’t get me wrong, it’s a great add on to have though!

The only modification I should mention is that we used a towel on the bottom just in case there was any condensation or leakage.

The temperature stability of the fermentation jacket was fairly reliable. We used large soda bottles and plastic containers filled with ice to maintain a cool environment.

We filled up and pitched around 66F and got up to 74F during high krausen. But mostly maintained a 70-72F range in the fermenter.

The thermowell was very useful to keep track of the internal temperature. We also used a probe thermometer in the jacket itself.

Taking the gravity from this vessel is heavenly! It beats pulling with a wine thief for sure.

All the trub made its way down to the bulb so it appeared like it would be a clean pull. The first four ounces were a touch “truby”. I recommend tossing a couple ounces before pulling your clean sample to test.

All you have to do to perform a secondary fermentation is close the union valve and change the bulb. Or, don’t bother. Either way it is so easy!

By the time we did make the change to secondary, the fermentation jacket was quite stinky. We checked when fermentation was complete and there was no mold on it or the towel. But still super stinky!

(And not fermentation stinky, mold stinky.)

I will be honest. I have never tried to harvest yeast before. So this was new for me. But it was super simple!

The bulb was a touch difficult to remove because it had to be tightened down so hard in the beginning. Again I couldn’t do it alone and this annoyed me.

I do not love the cork they give you. It doesn’t feel secure enough. Since there are threads on the bulb, you could create a screw-on cap. But then you would have to worry about the pressure if/when it gets warmer (which we found out when the cork popped out as the yeast warmed for re-pitching when we re-used it in a subsequent brew).

The transfer was odd for us. But not difficult. We just had to be flexible.

Usually we transfer with CO2 pressure from the carboy into a closed keg also filled with CO2. So, a non-oxygen transfer. I have not yet figured out how to make that happen with this system. So here is how we did it:

Not exactly what I wanted, but not too bad!

Cleaning is also very simple and quick. I know this is not your favorite part of brewing! So the easier, the better.

I will say the bulb isn’t quite as easy to clean. I used my bottle washer to get in all the corners and make sure it was completely rinsed out.

We did have an issue the next time we went to use the fermenter. There was a tiny piece of something or other hanging out in the joint around the spigot. This piece might need to be removed and cleaned separately after each use. 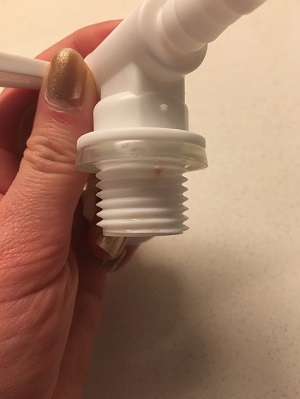 How do I feel about rating this as one of the best conical fermentors?

I like it a lot! I have already used it for a second brew. It was the first time I re-pitched yeast. This system made it super simple and approachable.

There are multiple points in the process where the FastFerment makes your life easier. Who doesn’t like that?

I would recommend it to friends and give as stellar a review as my homebrewing buddies did! If you were thinking about it, get it! It is worth it.

Katie has a passion for all things beer. She worked at The Bronx Brewery as the Tasting Room supervisor and helped develop homebrew classes to be taught there. She came to homebrewing through the Cicerone® program. She is a Certified Cicerone® but does not plan on stopping there. She also has taken the BJCP exam. She teaches children’s dance classes in her spare time and used to be a professional dancer herself. Katie resides in NYC where she makes it work in her small apartment with plenty of help from her boyfriend Jon and the homebrewery cat Merlin.