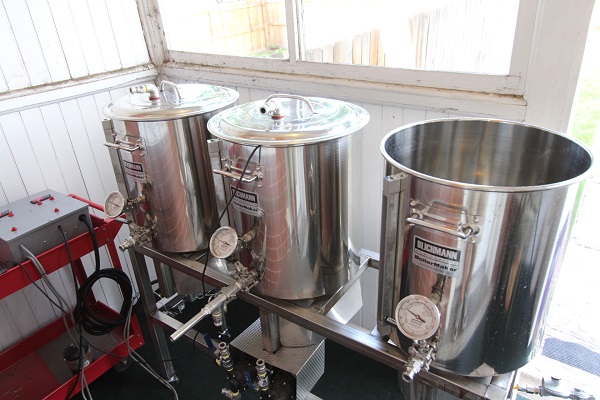 My homebrewing setup is pretty damn cool. It’s a Brutus 10.

The Brutus 10 is a homebrewing system designed by NASA rocket scientist Lonnie Mac.

Why did I build one? Well look at it!

OK besides being a gorgeous brew system, the one area I struggled with the most in homebrewing was repeatability.

People wonder why I would want to brew the same beer more than once, and something I’ve learned is that if you really want to improve a recipe then you need to brew it over and over again. With each “rebrew” you make a small adjustment and keep everything else the same.

It’s that “keep everything else the same” part that I’ve struggled with. That’s where the Brutus 10 comes in.

It allow me to brew consistent batches and eliminate (or drastically reduce) those days where nothing goes as planned and I don’t have a clue as to how the beer will turn out.

My goal is to make this the best resource in the world for building your Brutus 10. Building it wasn’t easy. I learned a lot and want to share that knowledge with other brewers so you can have the same sense of pride I have when I fire up my burners.

There’s a ton of content so I split the Brutus 10 build instructions into separate posts. There is:

What Does a Brutus 10 Cost?

“How much does the Brutus 10 cost?” is one of the most common questions I get. Rightfully so! It is not a cheap piece of equipment. Here’s the cost for my build, your mileage may vary:

Full a detailed cost breakdown please refer to the posts in the series.

Questions about the Brutus 10

I know there will be questions. I had a million when I did the build and the people I reached out to were kind enough to respond. I will happily pay it forward by answering your questions. A few guidelines though to best help you:

Good luck with your build!