Whether you are trying your hand at lagers or you live in areas without fermentation-friendly climates, regulating temperature is a full time beast.

Swamp coolers, ice baths and the like are fan favorites for cooling fermentation on the cheap.

To up the ante, however, many have taken it to the next level with refrigeration, modified deep freezes and insulated fermentation rooms. To make that jump, how do you regulate the temperature? Let’s review a handful of fermentation temperature controllers on the market even today.

We are specifically going to look at 9 thermostat options that are specific to brewing or have been commonly used by homebrewers.

This is about as bare bones as you get. The STC-1000 is a controller, nothing more. You need  electrical leads and a shell/case/enclosure to mount it in. For less than $20, though, would you expect much more?

Now that that’s out of the way… how great is this device? It’s compact and versatile. For the DIY’ers out there, let your imagination soar in how you want to implement this controller. Fair warning, it’s Celsius only, but there are some that argue that’s the only way to go.

Bottom Line: Great little box with a lot of potential. Just be ready to do a little bit of setup. 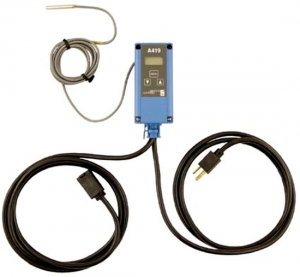 My first introduction to the Johnson line was their analog device. The digital version is a very functional, straight forward digital thermometer. There aren’t many frills to this device, but do you really need them when you are controlling your fermentation temperature? It is reviewed by some as a great introduction into ferm control.

The only negative here is that to switch between heating and cooling, you have to take the cover off and remove a jumper.

Not a huge deal as this is usually a seasonal issue that comes up, but a minor annoyance for when that need arises.

Bottom Line: Great device to cut your teeth on, or if you are on a budget. Works with most any 120v heating/cooling device. 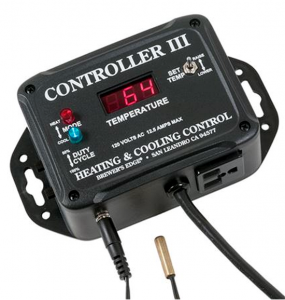 On the initial read for this controller, it seems to have almost everything. There’s heating and cooling options with the flip of a switch. It has an awesome option in an adjustable differential to keep from killing your compressor (speaking from experience, this is a great feature). Finally it has the ability to run at 50% of the standard duty cycle.

This basically means that you can control how hard your cooling environment runs. If it tends to cool very quickly and you consistently overshoot your temperatures by more than a degree, then running at 50% duty cycle will keep your cooling unit from running that hard.

As you start reading real-life experiences for this unit, however, a different picture is painted. Users complained about long spans of time waiting for the unit to fire when outside the temp delta. Other users commented on the sensitivity of the unit, or rather lack thereof, going as far as 7 degrees out of spec before activating the power solenoid. Still others find this crafted device well suited for their environment.

Bottom Line: If you are a tinkerer and only need to heat or cool on any given day, this may be a good option for you to consider. 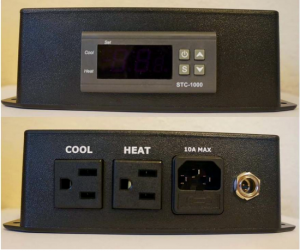 Take an STC-1000, flash it with an open-source firmware that allows you to create temp profiles, then throw it in a build-box with the necessary hardware. You end up with this fantastic device from Will Conrad.

Just for the sheer ingenuity of this build, this ranks very highly on my list. Sure, you don’t get the internet connectivity. Really, though, how well do I track the rest of my stats electronically?

Bottom Line: If you want lagering, and want to set stages, then walk away, this is your temp controller. Even if you don’t lager, this build is clean and very functional. 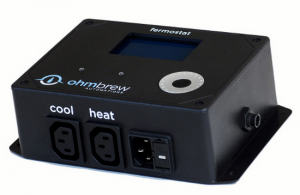 The people at ohmBrew really put a lot into their design of the Fermostat. An LCD readout, scroll-wheel menu navigation, and removable storage for copying and creating profiles on a computer give many fine modern amenities to temperature control.

Another plus for the Fermostat is that it is one of the few that shows support for 240v circuits. This might seem like overkill, but not when you start thinking of other applications surrounding homebrewing (more on this later).

Bottom Line: It’s not the cheapest, yet far from the most expensive. This is a nice “plug-and-play” solution for your cooling needs. 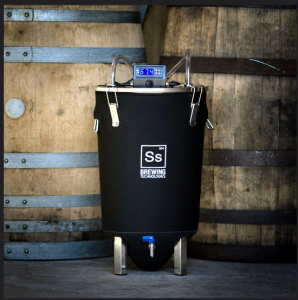 This is probably one of the coolest things I’ve seen come to the market for homebrewers. Want to temp control like the pro’s? This guy and some glycol will you so close, you will practically be a mini-me of (insert your favorite brewery here).

Ok, maybe that’s high praise, but SS Brew Tech really knocked it out of the park with this device.

It’s essentially a HERMS-type device for fermentation control. You supply the hot/cool liquid supply, and it cycle-pumps that through a stainless steel coil loop. Comes with a neoprene wrap for added efficiency.

They have a 7, 14 and half barrel sizes. Check out the full lineup here.

Bottom Line: The Price tag is on the higher end, but you certainly get what you pay for. Beautiful device by SS Brew Tech. 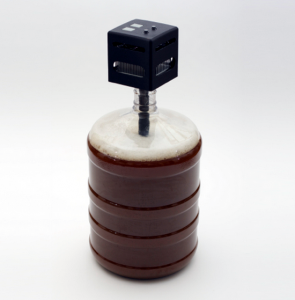 Looking to harness the efficiency of a heat pump along with your army of existing fermentation buckets? Look no further than the Immersion from BrewJacket. This device works by pulling heat from the beer instead of trying to cool the air around it. It certainly fits the bill for lagering enthusiasts.

The technology behind this unit has been used for some time in the HVAC community. Adapting it to the homebrew community is a wonderful feat. It’s a little pricey, but if you only have one carboy at a time going, Immersion is a great tool to have in your arsenal.

Bottom Line: It only cools, and will cost you as an early adopter. However, quite possibly one of the most energy efficient devices reviewed. 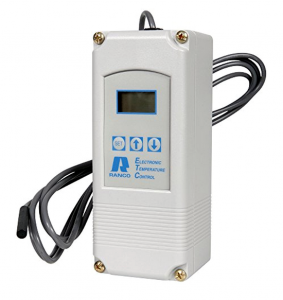 When I first got into temp control in homebrew environments, this device and an analog Johnson controller were all I could find. Not that there weren’t other items out there, but I only knew about these two. Aside from needing to learn a little bit on electricity to wire one of these up (you just get the controller for ~$50, or more if you find one pre-wired), it is a solid controller. It has a two degree delta, similar to just about all the other devices. The lead on the temp probe is a generous 6 feet.

The only real difference between this device and the Johnson is that the Ranco allows you to switch between heat and cool from the PID, where the Johnson has a jumper, which requires a power down.

Bottom Line: This is a time-tested, few frills device. It will get the job done, and has the right price point. 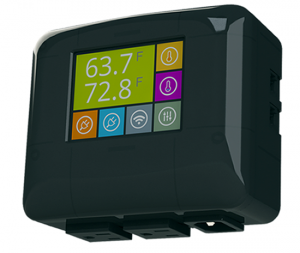 By far one of the newer entries in the market, this is the only one that gives you accessibility via a wireless network. Brewbit is an attractive interface that seems rather easy to work with. It has two temp probes, and the ability to monitor and control two fermentation chambers independently. While it packs a bit of a pricetag, that hasn’t stopped it from being hard to get access to simply due to demand being so high.

The developers of this unit have certainly put a lot of thought, love and time into their device. While time hasn’t necessarily had an opportunity to prove this device, it’s well on it’s way to being a top tier fermentation control device.

Bottom Line: You may have to wait a while, but if you want a network aware device out of the box, this may just be the controller you are looking for. (see these smart keg monitors also)

That’s quite a bit of information to digest. The question then, is, at the end of the day which controller is right for you? Amongst our brew squad, I can tell you that there are many Ranco ETC-111000 fermentation temperature controllers at our various houses. I have two in the other room as we speak. The versatility and familiarity has been hard to break away from. However, even after researching for this story, the STC-1000 (or Black Box, the Pimped STC-1000) gives me scary ideas.

I see four STC-1000’s in two large build boxes, one for controlling the keezer, one for the beer/ferm-fridge and two for the brew pumps and RIMS arms. I see manual power overrides for each device. Knowing me, I would throw in a few LED’s for good measure to show when power is on to each individual unit. Yeah, this one is going to cost me.

Depending on your comfort level, any of these may be a viable option for you. However, remember that, with the exception of the Immersion and the FTS, the units we have discussed are temperature controllers only. You will still need a way to heat and/or cool the area you are fermenting in. There are many ways to accomplish this. The temp controller, though, is the “brains” of the outfit, if you will. It tells your heating/cooling unit when to turn on and off to maintain your fermentation temperature.

Another aspect to look at: building a foundation with these temp controllers gives you an edge on other fun homebrew projects. Remember, the fermentation temperature controllers discussed are dual-stage or, at the very least, two-stage controllers. This means that it can either trigger a unit to turn on to heat UP to a required temperature, or cool DOWN to a specific temperature. The exceptions being of course the afore mentioned Immersion and FTS units. What then, could you use along with these controllers to maintain your fermentation temperature? In a future post, we will discuss these other components.