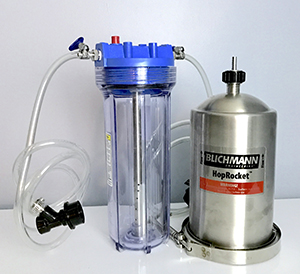 I love my DIY Randall. It’s simple, easy to use, and it works well.

But I haven’t had anything to compare it to.. until now.

Thanks to Blichmann Engineering 🙂

I was able to put my DIY Randall to the test against the mighty HopRocket in a hop-infusing battle royale. 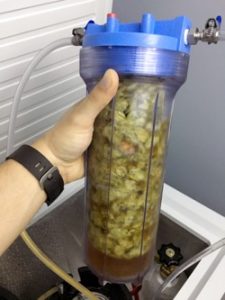 In case you missed it, check out my article where I show you how to build your very own Randall. 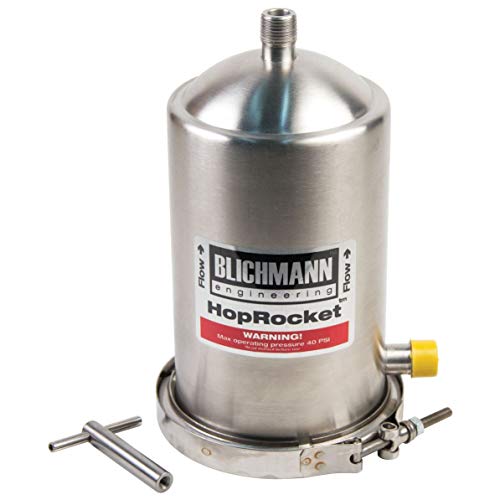 Pressure-tight up to 40 psi operation. 100% stainless construction and silicone seals.

First and foremost, the Blichmann HopRocket is more than just a Randalizer. The HopRocket is the Swiss Army knife of inline filtration and infusion.

The beastly and beautiful stainless steel design can handle both hot and cold liquids. That means it can be used as both a hopback (hot side) and a Randalizer (cold side). It can also be used as a general filtration device just about anywhere in the brewhouse.

The main goal is to determine which device is the better Randalizer. I’ll be looking at things like how much foam is produced, how much sediment gets through the filters, and how much flavor and aroma gets into the beer.

I’ll try to be as objective as possible by setting aside personal preference and other more subjective criteria until the end.

I’ve got a keg of session IPA yearning for more hop flavor and aroma. So the plan is to dump 2oz Cascade into each device, let them cool down in the keezer for 30 minutes, prime them for 10 minutes, pour a glass of each and then do a blind tasting with a buddy.

I’ll try to pick a winner in each category and tally the results at the end.

As a brief recap from my DIY article, the work is all in constructing the filter tube. The rest is just finding the parts and putting it all together. After that, it’s as simple as inserting the filter tube into the canister, adding the hops, and screwing on the lid. 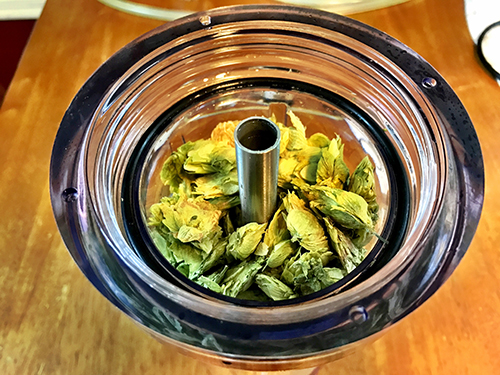 That’s 2oz of hops, which is max capacity for this build.

The HopRocket  doesn’t require any construction, so you save time and effort up front. But it has several more parts and takes a bit more effort to assemble/disassemble with each use. 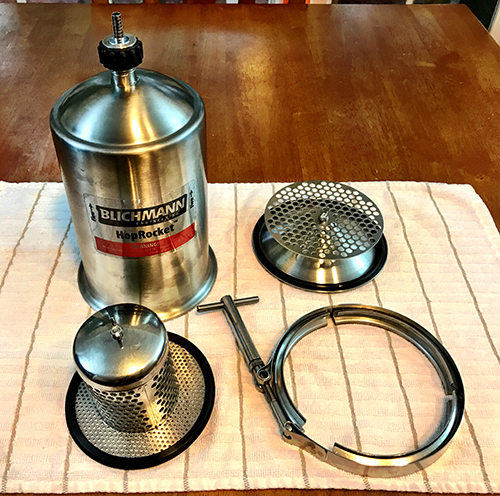 For example, since the inside of the HopRocket canister is only accessible from the bottom, and it doesn’t stand upside down on its own, Blichmann recommends using a carboy drainer to hold the HopRocket upside down while you’re working on it, as shown in the picture below.

Here’s a link to a standard carboy drainer. They’re cheap and very helpful! 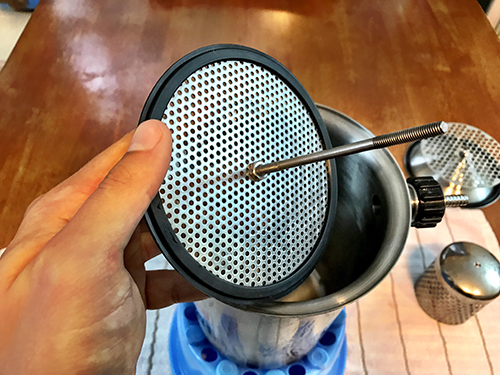 Also, when inserting the perforated screen into the bottom of the canister, it’s extremely helpful to leave the inside of the canister and the black silicone wiper seal wet with sanitizer. Otherwise, the seal will easily stick to the wall and peel off. Trust me, it’s frustrating getting that seal back on. 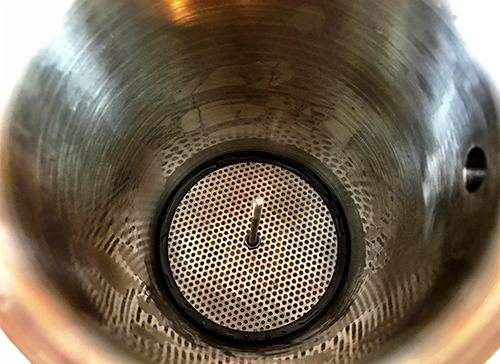 You don’t need to use the HopRocket’s cylindrical insert when Randalling. That frees up a bit of space and it’s one less thing you have to worry about. Just remember to leave the 4” post in the screen as shown above so nothing gets through the hole.

Finally, add your hops and reinstall the band clamp. 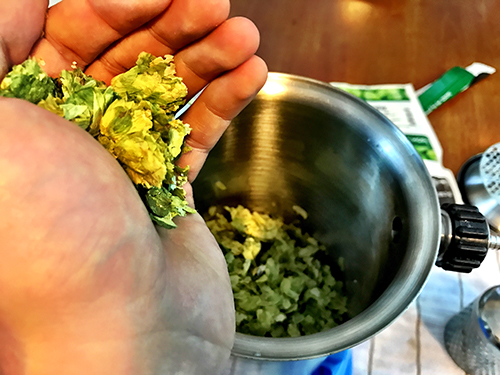 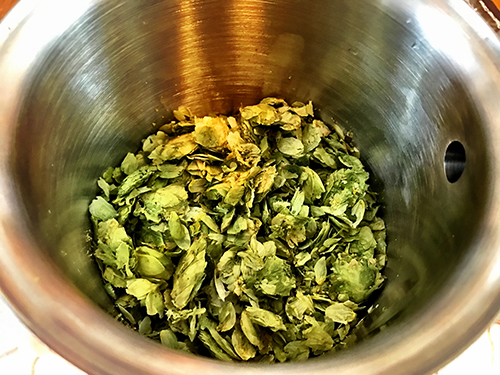 That’s 2oz of hops in the picture above. This beast can hold up to 4oz without the cylindrical insert. That’s great for a hopback, but I don’t think you need that many hops when Randalling.

Though it takes a little bit of elbow grease to construct the DIY Randall, it’s easier to assemble and disassemble. The HopRocket comes ready to roll, but it takes a little more effort to work with. This is really a matter of preference, so I’m going to call it a tie.

As with all of Blichmann’s products, the quality of engineering and construction is top notch.

Aside from the HopRocket being made of 100% stainless steel, the actual design is much closer to the original Dogfish Head Randall than my DIY build. That is, the beer flows in through the bottom of the canister and naturally exits the top. This theoretically reduces the amount of agitation in the chamber and increases the hop utilization.

In the DIY build, the beer enters the top and is forced down to the bottom and back up through the filter tube. 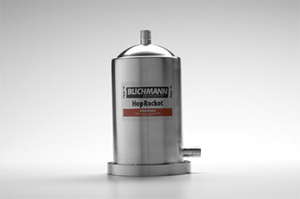 No surprise here. We’re talking about a whole house water filter versus a Blichmann product. The HopRocket was designed for this.

I’ll go ahead and get this out of the way. The HopRocket is more than twice the price of the DIY build.

Also, the HopRocket does not come with hose fittings. As stated in the Owner’s Manual: “Each brewer prefers their own hose size and fitting type for their brewery and intended application so we have not included these parts.” Makes sense.

Blichmann sells several kinds of fittings, but any ½” NPT female fittings will work.

Blichmann products are pricey, and for good reason. But you don’t need to spend a lot of money to Randall like a boss.

I learned quite a bit about foam reduction while using the DIY Randall. Cold temps, low PSI, fully open valves, etc. I got it down to where after the first initial pour, it looked as if it came straight from the keg.

I applied these same techniques to the HopRocket. Sure enough, the first pour was a little rough but every subsequent pour was quite nice.

This is the 2nd pour from the DIY Randall. The HopRocket looked pretty much exactly the same. 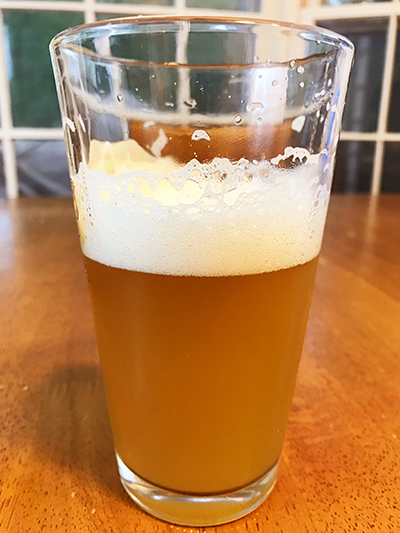 There was no discernable difference. Both perform quite well under the right circumstances.

In addition, the screen covers a much larger surface area than the filter tube, so more hops are touching the exit points. The result was more particles got through the HopRocket. 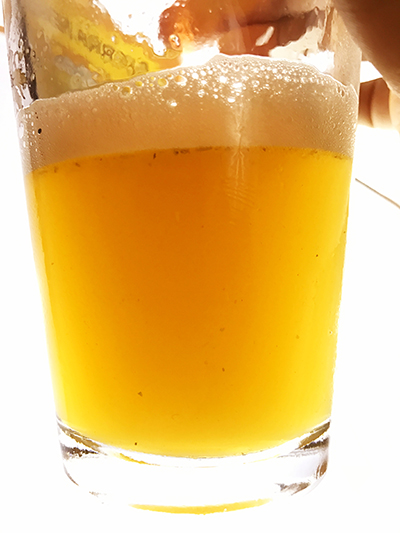 The 2nd pour from the HopRocket had quite a bit of sediment. The 3rd and 4th pours were much better, but it never quite caught up to the DIY build. 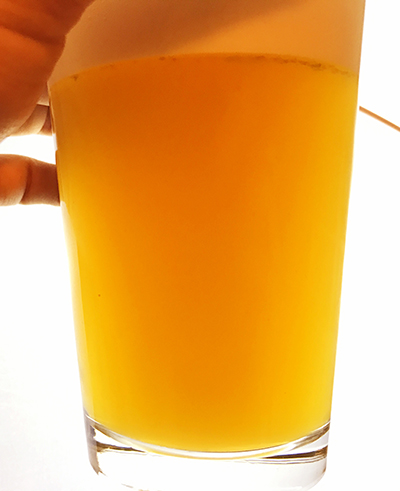 The 2nd pour from the DIY Randall still had some sediment, especially underneath the head, but quite a bit less than the HopRocket.

Perhaps the difference was the amount of “open space” in the canisters.

I had to pack 2oz of hops into the DIY Randall. Surely after soaking in beer and compacting by the pressure, the hops settled into a fairly solid blanket, basically creating another filter.

2oz of hops only filled the HopRocket half way. Even with the upward pressure, I’m sure they never really settled in too well.

So would the HopRocket have performed better at max capacity? Probably. But in the context of Randalizing, 3 or 4oz of hops is overkill on the homebrew scale. It’s expensive and probably not worth it.

I think the number of holes in the HopRocket screen could be reduced. Either that or make the holes a little bit smaller.

The smaller the filter, the less gets through. Both devices did a pretty good job at filtering, but the DIY build edged out the victory.

This could be the deciding factor. I mean, the DIY Randall is cheap and does a good job at filtering, but if I’m not getting any hop flavor or aroma out of it then what’s the point?

There was a difference between the two. The HopRocket pumped out a little more flavor and aroma.. but it also pumped out more hop sediment, so I can’t really count that as infusing.

The DIY build definitely pulled the hoppiness through and left most of the sediment behind.

This was a really close one. If it weren’t for the sediment getting through, I think it would have been a tie. Blame it on the filter screen!

Let me reiterate: this experiment was all about Randalizing – hop infusion on the dispensing side.

Overall, the DIY Randall edged out the victory. It’s cheaper and does just as good a job as the HopRocket at filtering and infusing.

However, the DIY Randall cannot be used as a hopback. So if you want a more diverse hop infusion tool for your brewery, the HopRocket is your buy. Final Gravity Brewing Company, one of the best breweries in Richmond, VA, uses the HopRocket for all their infusion needs.

Pressure-tight up to 40 psi operation. 100% stainless construction and silicone seals.

It ultimately comes down to personal preference, what you want to do, and what your wallet (or significant other) has to say about it.

I personally loved building the DIY Randall, saving money, and being able to see all the action through the clear plastic!

Have you ever used a HopRocket as a Randalizer? Did you have different results? Please post them in the comments below!

Disclaimer: The HopRocket was provided for review, compliments of Blichmann Engineering.