The glass growler has long been the king of taking beer on the go, whether at the brewery or at home. But within recent years, two companies have rose above the glass growler with stainless pressurized growlers. Improving on the many downfalls the glass versions can have.

Stick around to find out in this product shootout.

If you’ve ever shared a beer and a glass growler or bought some beer at a brewery, you might have noticed how quickly that beer can go flat for stale. While they make it easy to fill up and share beer, if you don’t drink that beverage fast, oxygen exposure can greatly impact your beer.

I mean, there’s no way to fully seal up that glass and hold pressure. It’s simply for day of or next day use for the best results. So when I first heard about these pressurized grows, I was pretty pumped. Not only will it hold the beer under pressure, meaning no oxygen exposure and a constant carbonation, but you can also give your friends and family that satisfying feeling of pulling on the tap.

Plus, I’ve broken enough glass in my life, so stainless steel is a major bonus. So when I finally got my hands on one, I put it to the test and quickly fell in love, but I just as quickly found out that these are more than just any regular growler.

I found there were three extremely useful ways to use these growers.

First was using it as intended to take beer on the go. You can fill them up just like a normal growler, but the lid is where the magic is. They have a few types of lids, which I’ll talk about later, but the base lid that they’re sold with holds these small CO2 cartridges.

This is what provides the pressure to serve the beer without having to open up the lid again. Usually one of these mini cartridges will last for the whole batch and with just a turn of the dial, you can raise the pressure when it gets low. There is a gauge on these to tell you what the pressure’s like inside, and since you aren’t opening the lid, they have a nice sightglass to give you an idea of how much beer is left.

The second way I use these is to put that pressure to work and force carbonate the beverage. Sometimes I brew small matches or split a portion of the beer off to experiment with flavors, and by using those cartridges or even alternative lid that has a CO2 gas post, I can fully carbonate the beverage in the growler.

And if I have nothing to fill it up with, I can always just throw some water in it and have sparking water on tap, which is really quite delightful.

And the third way is to clear up keg space. Often I’ll be nearing the end of a keg of beer and I have the next beer ready to be packaged. Instead of forcing down whatever’s left, I can transfer into the smaller growler and keep that beer on tap. All what clearing space for the next beer to come on down.

I’m sure there’s other clever ways to use these and if you have any suggestions, feel free to drop them in the comments. So far that’s pretty general for how these work and how I use ’em, but let’s take a closer look at these products and see how they might differ.

The two main companies that manufacture pressurized growlers are GrowlerWerks and Craft Master Growlers, and to keep things fair, I’ll be taking a look at their respective 64 ounce half gallon versions, although they do both have a 128 or full gallon, which is a nice size to have, especially for small batch or experimental brewing. 2 64 ounce versions costs about the same. As of right now, the GrowlerWerks version is just $10 cheaper.

First, let’s compare how they look. Growler Werks has gone for more rounded and softer features. It comes in brush stainless or copper, and it has a handle that makes it easy for carrying, which the Craft Master 64 version does not. I also like the markings on the site glass too, which gives you an idea of how many pints are left.

The Craft Master Growler version is a bit more square and thinner on one side, which is really kind of a smart design because this shape makes it easier to fit in the door of your fridge, whereas the rounder body of the GrowlerWerks version can struggle on small cubbies of your fridge.

The craft master versions only come in stainless, but you can choose from Brushed or a mirror finish, and additionally, you can add a custom engraving to personalize the Growler for a gift, or a gift for yourself.

They both have gages to determine the pressure, which is really helpful. The GrowlerWerks one seems to cap out a 15 psi, whereas the craft master version goes all the way up to 60 psi. However, they do state on their website that the PRV releases automatically at 20 psi.

Speaking of which the GrowlerWerks does not even have a prv, which I find kind of mind boggling. The only way to release pressure is to pull on the tap. Taking a look at the taps, they both work in a similar fashion with a few differences.

Growlerwerks has this little button to press and lock in the tap and the tap handle itself is attached using a little tie down screw, which I basically lost immediately.

Also, I’ve noticed the tap can get a bit sticky. I’m not sure if it’s the method in which it seals or what, but it can take a few jiggles to get it going after it sat for a while. The Craft Master tap screws on and has a collar that you can even tighten to lock it in place, although it’s not a perfect lock, and in a few instances it came loose, but I haven’t noticed any sticky tap bolts with it.

Both of these disassemble pretty easily for cleaning. The only thing to know is that the GrowlerWerks version has a proprietary tool for loosening the parts. Just be sure not to lose that.

Now, they both come with a lid that takes an eight gram CO2 cartridge, but that’s not the only way you can apply pressure. They both have some accessories you can purchase separately.

I’m gonna ignore some of the more unnecessary accessories like mats and travel kits and really focus on the lids and attachments that can upgrade these. They both have Nitro attachments, which I haven’t personally used, but if you make cold brew or have a stout you wanna put on Nitro, you can do that.

Remember how I said the Growler Werks doesn’t have a prv? Well, if you get the ball lock cap, then it does have a PRV. Using the ball lock cap you can ditch the CO2 carts and just pressurize with your large CO2 tank. If you have one, then it’s, which is helpful if you run low on co2, and instead of removing the lid to swap in a new CO2 cart, you can just top it up from your tank.

And this also allows you to dial on pressure a little better. You can pressurize slightly higher for more fizzy drinks or even rapid carb your drink and then lower the pressure down for serving.

The only issue is that if you’re not at home and you run outta pressure, you’re kind of screwed. On the craft master side they too have a ball lock lid and it does the same thing. But what they also have is a keg cap, which turns your little growler into a tappable mini keg. You can just add pressure via the gas side ball lock, and then it has a secondary post for liquid out.

The liquid post has a dip tube that pulls the beverage from the bottom, and then all you need to do is attach it to your kegerator and you can have it on the big tap. This is my favorite way to use these growers. That way I can have it on tap at home and then when I want a take to go, I just unplug it from the kegerator and go.

Next I fill these up to see how well they perform. They both have double wall insulation to keep temps down, and really there wasn’t too much of a striking difference pulling these outta the fridge and taking a temp measurement every 30 minutes.

I found that the Growlerwerks version just slightly edged out the craft master version, but in most cases, I’m keeping these in the fridge unless I’m heading to the beach or the park. Speaking of taking out, you definitely do get some looks and questions asked maybe because it’s so shiny and fancy looking, but people love to ask about it and try it for themselves.

Let’s quickly review the pros and cons of each starting with GrowlerWerks.

The pros are that has a handle for easy carrying. It has pint markings on the site glass and it comes in copper if you like that aesthetic.

The cons are that the base version doesn’t have a prv and that tap handle can get kind of sticky. On the craft master side, the pros are that sleek shape that fits in a lot more fridge doors. It comes with the PRV already on the cap, and it has better overall accessories and customization.

The cons are, there’s no markings on the sightglass to know how much is left, so you’re kind of guessing. And the 64 ounce version doesn’t have a handle, which can make carrying it kind of awkward.

But which do I recommend overall?

Well, if it isn’t clear, I’m a massive fan of the Craft Master Growler. The quality, the form, and the customization you can have is just above the competition, and the fact that it can quickly turn this little growler into a mini keg is pretty amazing. It becomes even more useful and more valuable with that just one little swap of a lid.

And it’s also the little things they consider when designing and building it. It just feels like it was made for home brewers, and because of that, it gets the W in my book. So as you’re getting ready to fill your holiday wishlist or if you’re shopping for the home brewer or beer lover in your life, then consider picking one of these up today. 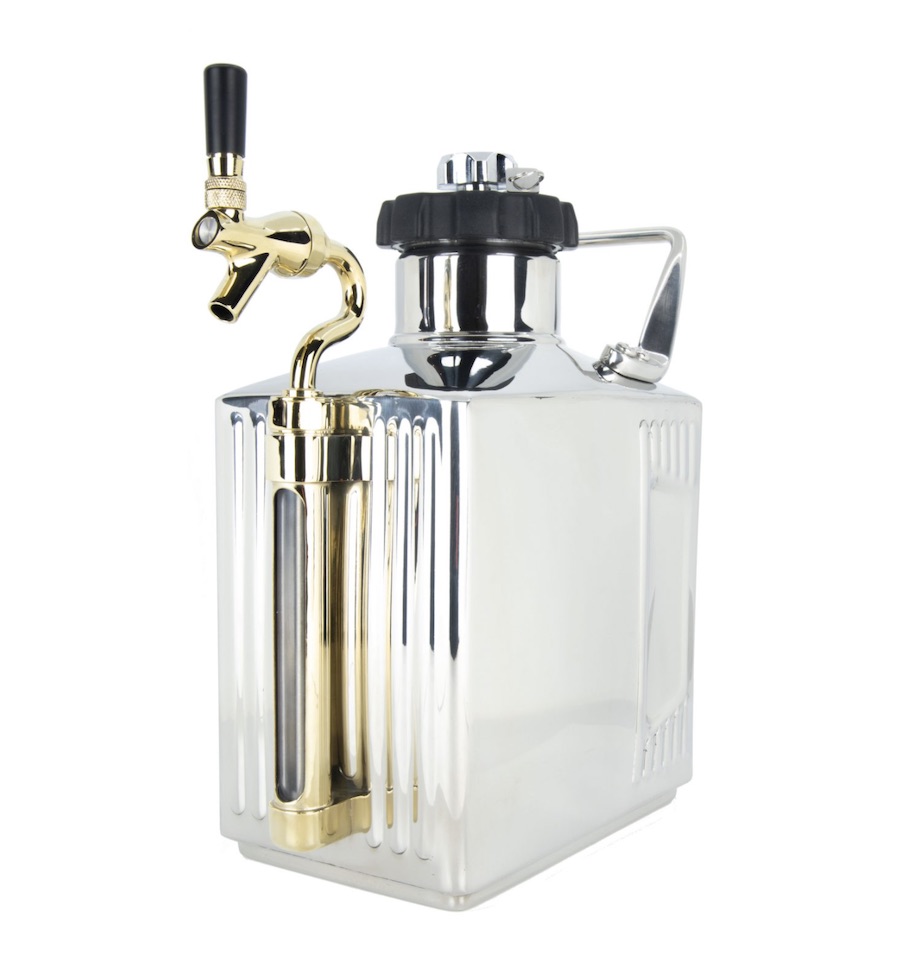 Thanks to Craft Master Growers for sending this grill out over to me to test out, and I’ll leave a link in the description for you to check out the website. I know you won’t be disappointed with the product and the many ways you can use it, and there’s nothing quite like the reaction you get when you whip one out at a brewery or a party conversation starter for sure.

Speaking of holidays, I got a lot of seasonal recipes that are perfect for your upcoming holiday party. Here’s one that’s just too easy not to try. Cheers and happy brewing.