All right. So today we are brewing a London Porter and we’re going to do it in two different beer systems. We’ve got, what do you call this? This system homemade road show with gas and doing it outside. And then we’re going to compare that to the all electric brewing system, which we’ve got inside in the basement.

See how it goes. 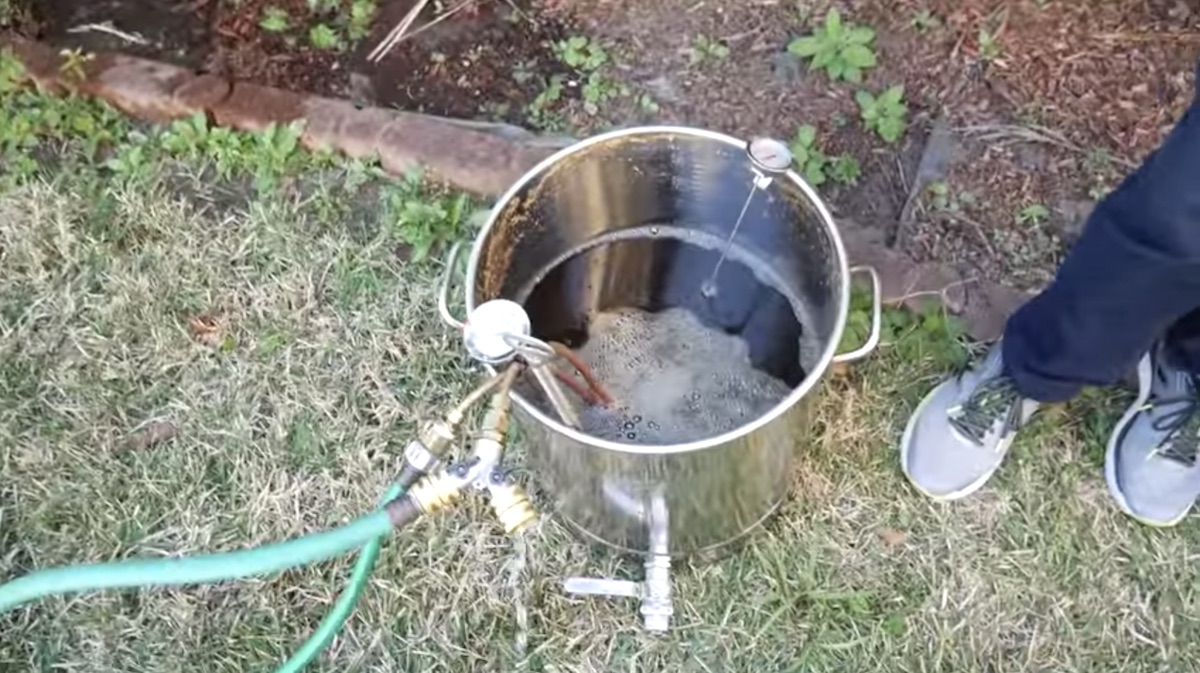 We are heating the sparge water that we will use to rinse over the grain bed and wash the sugars off the grain. And so after this gets to about 170 degrees, we will put it in that smaller, uh, orange hot liquor tank. And then we have a gravity feed mechanism that will take water out of that, spray it over the grains in the mash tun, and then it’ll come out to the mash tun into the boil kettle. And then we’ll boil that.

For the breweasy, the system, we have all of the grains in the top kettle and half of the water. The other half of the water is in the kettle beneath with the heating element and the temperature is controlled by the tower of power system where we set the temperature and that cycles on and off the heating element to keep the mash temperature where we want it. When the mash is finished, we drain everything to the bottom kettle. And then that’s where we boil.

We’re adding a third brew to this. We’re doing a Brewer’s best Scottish ale?? Yeah. 0.3% alcohol by volume. So if this turns out to be the best London Porter, we’re going to be a bit disappointed. 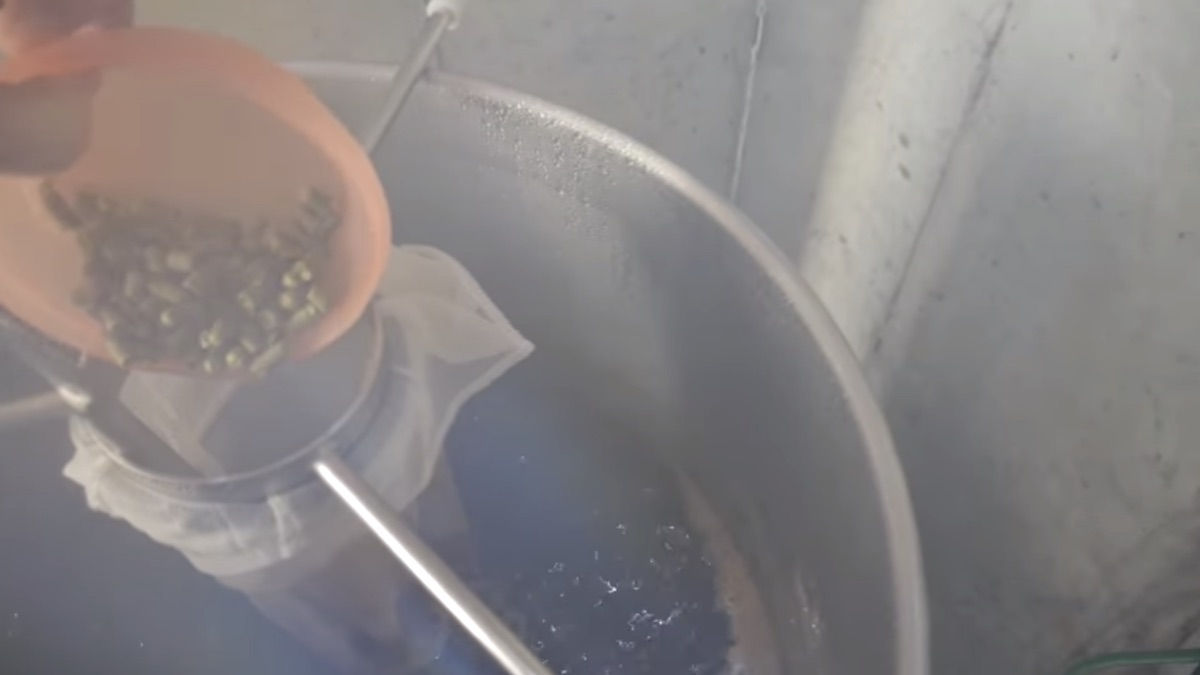 So what’s going in? Three ounces of fuggle hops.And then there’s our um, aroma hops, 15 minutes of fuggles.

So it’s cooling time. We are using the Blichman therminator with the breweasy. First of all, just recirculating on itself because a tap water is not cold enough to get this down. Um, I tapped what is about 80 degrees, so we’re recirculating first and then we will use a bucket of ice to send some cold water through the plate chiller as well. So that’s what we’re doing for the Blichman setup.

This is the other setup using an immersion chiller. We are down two 80-84 degrees, 87 degrees, maybe 87 wow.

We’re siphoning in the fermentor and we have this inline filter that we just got and the siphon got really slow so we drained it out. It’s actually, it’s not that much in the middle, but anyways. 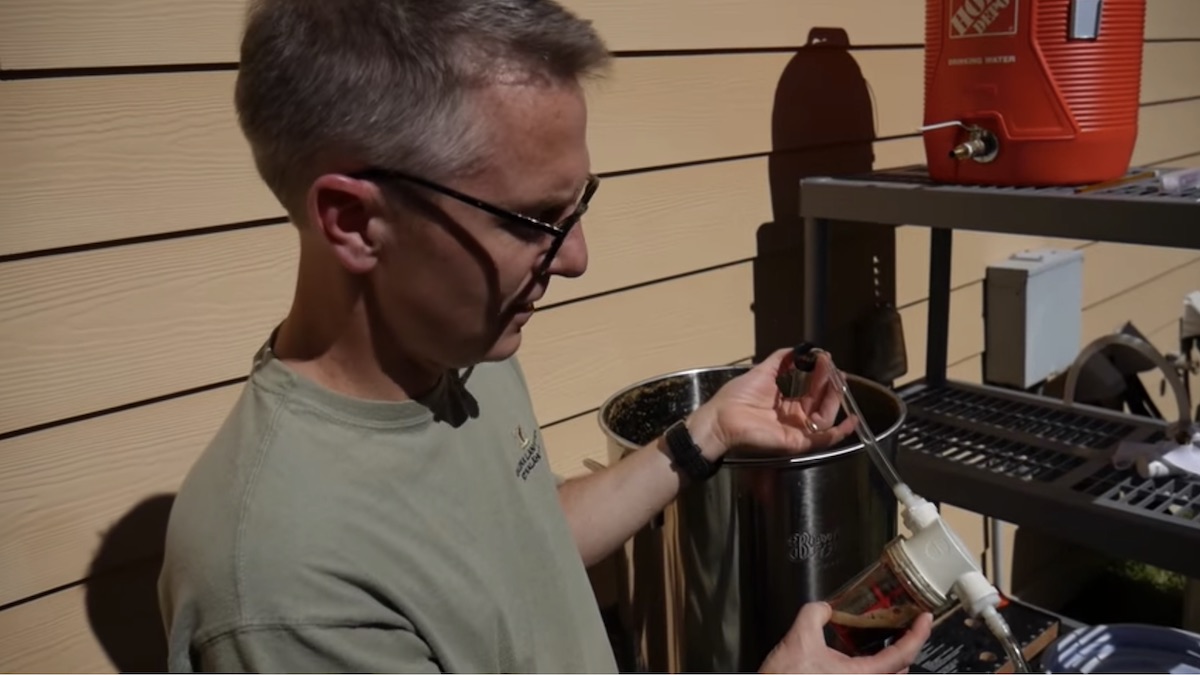 You did your gravity reading. Yes we did. And you got 10 55 ish, right on the money. The Blichman one, we’re taking the gravity reading and we’ve got to 1.056 is our original gravity, which is exactly what we wanted.

Going to aireate, let’s see. Okay, we’ll try this on our car boys.

All right. So we took the stopper off because the stopper was a shedding plastic or rubber into our beer. So it seems to be better and we’re letting oxygen in this way too.

This is our yeast. After it’s gone through the starter, it is quite chunky. We’re not really sure why. Never seen chunky yeast before, but it’s a different strain of yeast than we’ve ever used and we will swirl it and pitch it. 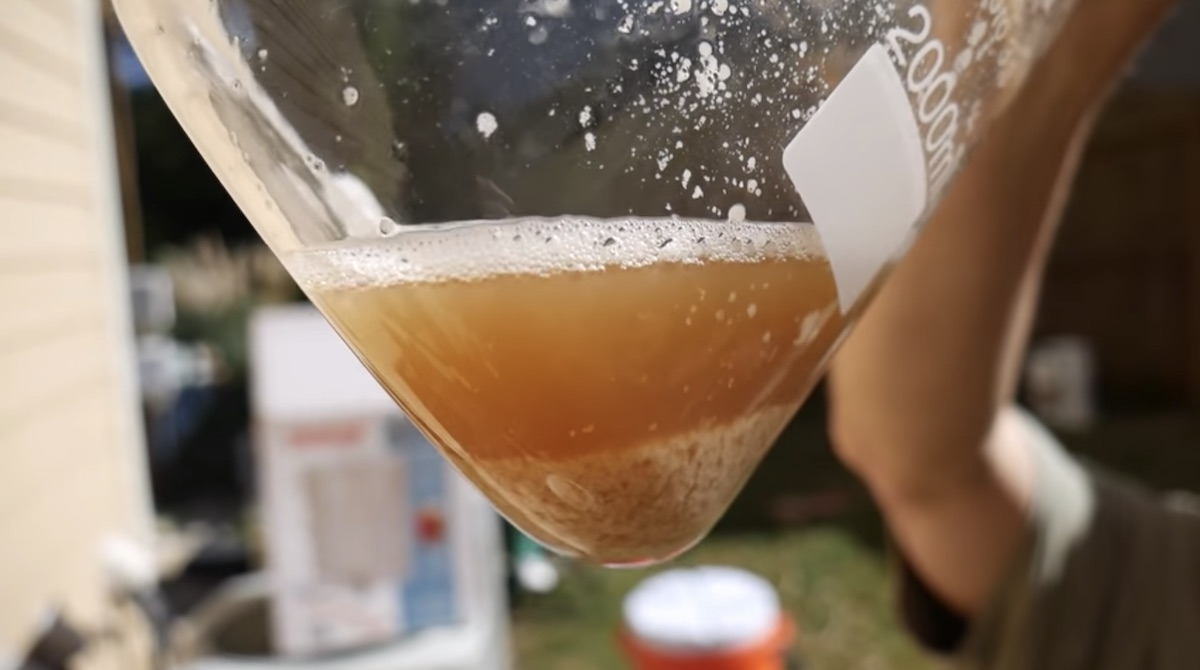 It’s been a month now since brew day, I’ve got the guys coming over. Let’s do a taste test and see how the Blichman and home-made system beers have ended up tasting.

Doesn’t taste light to me. Don’t know. This is the Blichman one. This also came a little bit light. We think about 1.021 so 4.3%. it seems slightly less malty than than that one that didn’t ferment.

So now is the moment when we are going to compare the bear. We’ve got a blind taste test only Brian knows the uh, which is which, but we have two beers here. What is the homemade system and what is the Blichman system? And we’re going to see if we can identify which is which. That was us. That was you. Yeah. See I think it’s the other way around. Good. We need one person to be wrong and you might be three of us. And where are you at? This is us. And that’s the Blichman one the right one.

Martin is the right one!

Yeah. We all said we could taste, they were all different.

And this one’s out of your tap. This one wasn’t dryer. So green is out of the tap tap. How confident?

That’s my final answer. And that is incorrect.

Incorrect. So four out of five.

Well, the problem was, but we thought that beers did taste pretty different. That wasn’t until we did a blind taste test, and actually most of us got it wrong. We couldn’t pick her out, which was the Blichman and which was the homemade, but overall, I guess we should conclude this.

We brewed the same beer for two different systems. The results were slightly different, probably mainly through fermentation, but in the end, both beers were pretty drinkable.

We like them both. Then in the end, it’s really all that matters.