There are a few ways to brew Guiness at home, and today we are going to look at a few of the most popular.

Today, I’m brewing a clone of an old favorite.The grain bill for this one. I’m using five pounds of 2 row English, pale malt, two pounds, eight ounces of flaked, barley, and a pound of roasted barley. Also because I’m brewing this in a 10 gallon system and I’m only growing five gallons. I need to bulk up my grist. So I’m adding some rice holes as well.

Now back in the day, Guinness was one of those drinks I’d really kind of shy away from back when I was living in the UK and primarily drinking European lagers. So it wasn’t until I went to Dublin Ireland and visited the Guinness factory that I had my very first taste of Guinness. And since then, I’ve been absolutely hooked.

There’s always Guinness in the house or have give us posters up at my bar. And it’s going to be really interesting to see how close to the real thing I can get with this home brew. For the hops, this recipe only uses bittering hops. They go in at 60 minutes as part of a 90 minute boil. I’m using 2.4 ounces of Fuggle hops.

So that’s brew day done. I hit my original gravity of 1.040. So now it’s just a case of letting the yeast do its thing and let it ferment.

Now, one month later after serving it on nitrogen, this is the result. Now it’s really difficult, I think to emulate that kind of Guinness twang. I’ve got to say as somebody who drinks a reasonable amount of Guinness myself, the thing’s pretty close.

Today, I’m brewing a dry Irish stout, and I’m going to sour it to try to replicate a well known commercial version of this beer. Can you guess which one?

It’s rumored that Guinness gets this distinctive flavor from a souring process. And I’m going to try and recreate that souring with a bit of a hack.

Let’s talk recipe for this one. I’m using the classic 70%, 20%, 10%, grist ratio where 70% will be the base malt, which is Maris Otter. So that’s eight pounds in this recipe. Then the 20% is Flaked Barley. That is two pounds of that. And that all that’s really there to enhance the mouthfeel. And then the 10% or the one pound is the roasted barley, which is there to give that deep, deep red it’s not black.

It’s a deep red color that you would expect from Guinness. 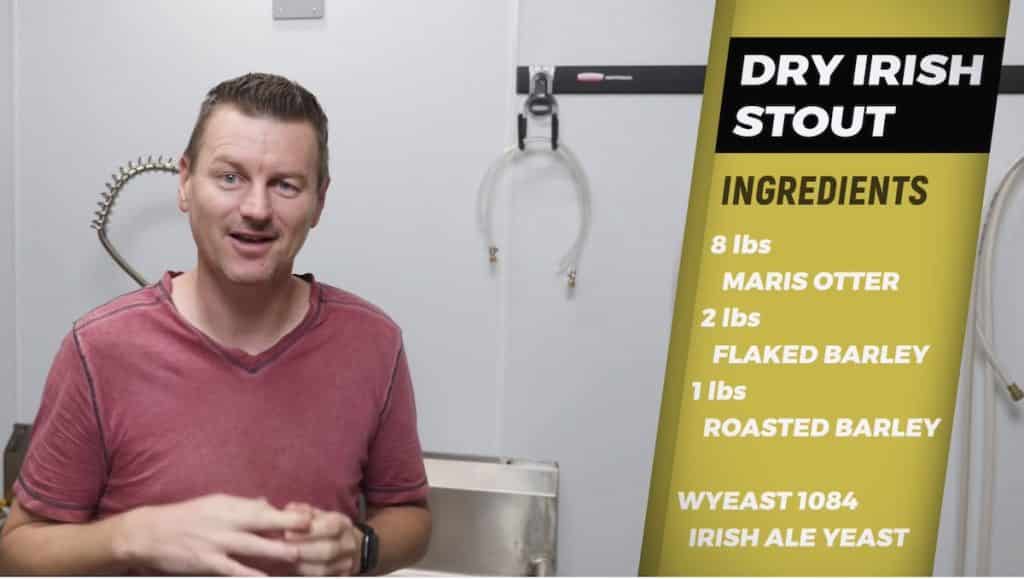 I’m looking there for an SRM of around 33. For the yeast using Wyeast 1084. That is Irish Ale Yeast.

Hops for this one. It’s just bittering hop. So have 2.5 ounces of fuggle hops, which go into 60 minutes. That’s it for hops.

So while the wort is cooling, you can hear running liquid everywhere and the fan and whatnot. Let’s talk about souring this beer. Now the internet has helped me. There are three potential ways to do this;

3 Ways to Sour The Stout

The easiest way is just to add a couple of drops of lactic acid. So this gets added to the beer after fermentation has complete, and you can sort of add it to taste. So that’s the big advantage of that. And you put little bit in a few drops. See if it’s got that sort of sourness you’re looking for. If it’s not, you could add some more. So that’s the easiest way to do it.

The other way to do it is to use the assidulated malt or sour malt, and to put a little bit of that into your grainbill, and then that should give the souring and you do that of course, in the mash.

The third way to do it. And the way this sounds the most interesting to me. So there’s the one I’m going to try is to take a little bit from the wort and to sour it by leaving it ou, exposed to air for a few days. Hopefully that, uh, oxygenation will, will result in the beer souring, which point I’m going to boil it and then cool it and add it into the fermentor. So that’s the plan. 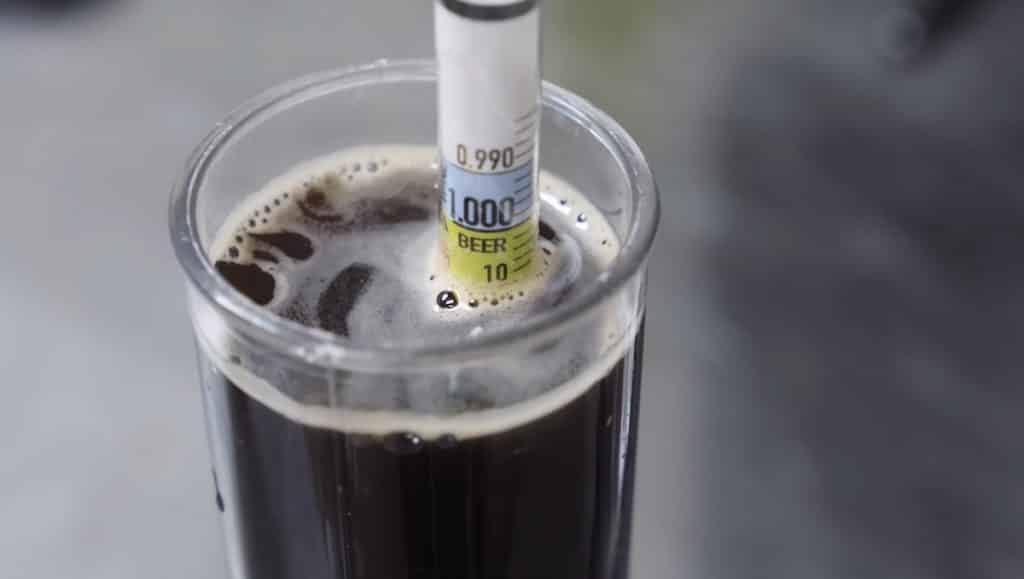 Gravity of the beer came in at 1.050. That’s a little bit higher than we were aiming for actually quite a bit higher. I was expecting 1043, I dunno. Or so it was a bit stronger beer, fine with me.

Alright. It’s been chillin for three days. See what we got here? Well, I’m not really sure how wort is supposed to smell after three days of not being fermented, but all right. So lets let it boil for about 10 minutes. Now I need to cool it before I can add it to the fermentor. Starsan here, which I’ve been using to sanitize.

Okay. So after three days, the beer is now at about 1.010, which is actually the expected final gravity. So basically fermentation is pretty much finished. I am now going to take this opportunity to put this boiled and now cooled soured wort into the Guinness and, uh, hope that I’m not ruining a perfectly good batch of dry Irish stout.

It’s been four weeks now, and this is it. The soured dry Irish stout. 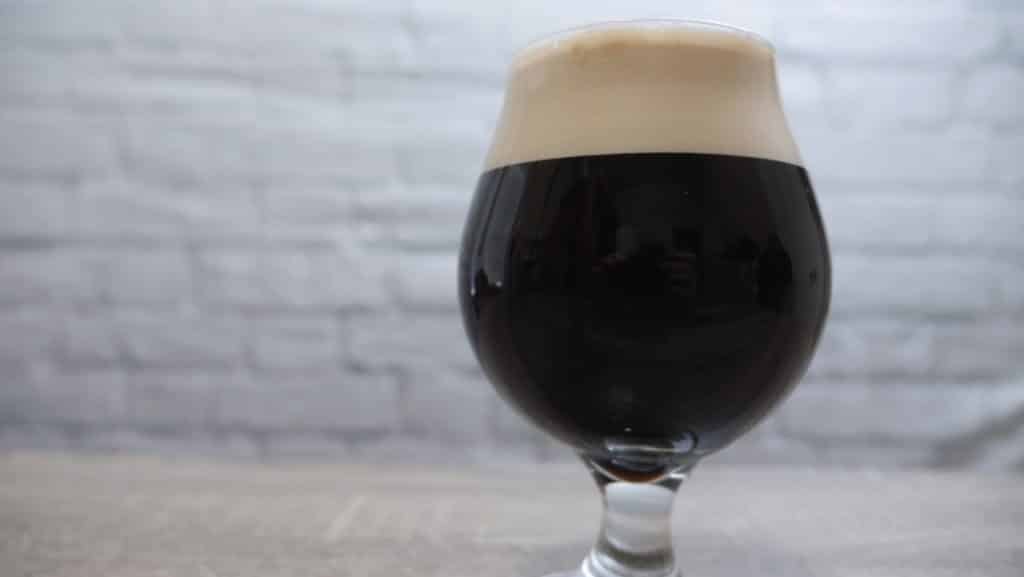 Okay, tip I got from Ireland; when you drink this beer or any sort of Guinness style beer, you don’t just like take little sips, you take three, four big sips of the beer. That’s what I have been told. And that really will tell you how good this beer is.

And let me tell you this thing has come out great. I was a little bit worried about putting that soured wort into the already fermented beer. Um, but this is not the first time I’ve, I’ve brewed dryed Irish stout, but this is without doubt my favorite version of it.

So as you can see, I did put this bit on nitro. So it has that kind of, that kind of creamy mouth feel that you get from a nitro poor. So there you go. Dry Irish stout soured with a little bit of a wort that’s been left out for a few days, turns out it’s a hack that really works.

If you’ve given this a go, let me know the comments (on youtube) I’d love to hear from you. And I will see you on the next one.