How To Brew Kolsch Beer

Kölsch beer was first brewed in the city of Cologne, Germany. Beer in Germany is extremely intriguing in that regional specialties reign supreme;

Each region brings about a uniquely brewed beer that has distinctive characteristics specific to that beer style, Kölsch is certainly no different.

A blonde colored beer that is approachably hopped with wisps of fruity aroma. It is top fermented, cold-conditioned and is palatable for a wide variety of beer drinkers.

The town of Cologne is situated along the heavily trafficked Rhine River and perfectly positioned between both Munich and London.

It was because of their location along the shores of the Rhine River that the town of Cologne became the impetus for the brewing industry during the Middle Ages.

In 1396, twenty-two breweries formed a union or guild as it’s called, in order to protect themselves and their craft. This guild gave a voice to those fighting against taxation, labor, and trade practices bestowed upon them by the ruling class. This persistence and attention to brewer’s rights is still relevant today.

Hops Come into the Picture

Hops were first mentioned in Cologne in 1408. Up to now, brewers were usually brewing gruit beers. A gruit beer uses a herb mixture that is used for bittering and flavoring the beer instead of hops.

Keutebier was a wheat and barley beer with hops that became popular in northern Germany.

At first keutebier was seen as a threat to the development of kölsch, even the guild was against admitting these brewers. By 1495, gruit beers were outlawed. This laid the groundwork for the future of kölsch beers.

Surviving the Test of Time

Only brewers in Cologne and Düsseldorf were brewing top-fermenting ales in the nineteenth century. Since refrigeration was now a possibility, altbier and kölsch brewers adopted cold-conditioning their beers.

Both of these styles became known as obergaerige laberbier or top fermented, cold-conditioned beer.

Nobody is exactly sure why the brewers in Cologne decided on top-fermenting and cold-conditioning their beers. Some have argued this was done just to be different and to stand out. Whatever the reason, this beer has survived the test of time.

Beer and War – War and Beer

As Kölsch was gaining its popularity and identity, World War I was about to begin. Strict rationing took place at this time and this hit the Cologne brewers hard. Heavy taxation followed and prohibited brewers from seeing their previous prosperity.

World War II had an even more devastating effect on the Cologne brewers.

With a city leveled, population reduced by 90%, and many brewers now soldiers. By 1946, there were only three breweries remaining in Cologne. Within time things grew for the better.

Within a couple decades, there were the same numbers of breweries in the guild when it started 650 years earlier.

The Birth of “Kölsch style”

In 1985 as many breweries were trying to mimic these Kölsch beers, The Kölsch Konvention formed. Twenty-two brewers signed contracts stating only brewers in and around the city of Cologne could define their beers as a true Kölsch.

This is why whenever American brewers have a Kölsch on tap, it is labeled as a Kölsch “style” beer.

Delicate fruit aroma on the nose, a product of fermentation. Pilsner malt aroma should be quite low. A low noble hop character is present and acceptable, but not found in those beers brewed in Cologne.

Yeast can have a low winy or sulfury note, along with apple, cherry, or pear.

There may be a mineral or sulfur character from either water or yeast, which can add dryness. Hop flavors are usually medium-low to medium.

An apple or pear salad compliments that slight fruit aromas coming from a Kölsch. To mimic the bread like character from the malt, a flatbread or pizza would pair nicely.

Bratwurst can be a nice contrast to the light crispiness of the beer. It will cut through the fat very well. Nutty cheeses can be a nice pairing as well.

Numbers for a Kölsch

Tips for Brewing your own Kölsch Beer

Usually authentic examples these days can have either Pilsner malt or a Pale malt as the base malt. Vienna malt or Munich may be added as a specialty malt in this case.

German noble hops are the hops or choice with a good Kölsch. Hallertau, Tettnang, Spalt. Some brewers like Willamette, Liberty, and Fuggles. Stay away from the American citrusy hops.

It’s time to pay homage to Köln, Germany with a beer that’s simple to brew and a simple recipe, but Oh so good when it’s done right, it’s time to brew a German Kölsch and we’re going to talk about packaging beer in kegs.

So if you’d like your beers nice and simple, then this is the beer for you. What I’ve got here is six pounds of German Pilsner the malt mixed in with four pounds of the Vienna malt. Going for a gravity of about 1.049 which should give a beer at about 5% ABV.

Mashing in my Unibräu system at 152 Fahrenheit for about an hour.

So what makes a Kölsch a Kölsch? Well, yes, simple recipe. So I’m using 60% pillsner malt, 40% Vienna malt. Actually, the more traditional way to do it is just to go in with pillsner malt hundred percent. Also those German Nobel hops, they’re important. But the thing that really distinguishes a culture is the fermentation temperature.

And that’s because it uses ale yeast, but is fermented like a lager. So typically an ale you would ferment around 65, 68 Fahrenheit. Um, but with a Kölsch, you’re going to use that ale yeast and ferment at 60 Fahrenheit.

Once fermentation is done, which is going to take a bit longer than, than the regular ale will then expected to lager the beer for about four more weeks.

And then once you’re done with all that, well you’d better get to drinking because Kölsch is also quite well known for its short shelf life. To preserve those delicate flavors, you’ll want to drink it as soon as it’s ready.

So let’s talk then about packaging beer into kegs. What I essentially want to do here is take the beer out of this fermenter and get it into this keg while minimizing the amount of oxygen that gets mixed up with the beer.

Oxygen in beer at this stage of the cold side, that’s a bad thing. It could potentially lead to off flavors and it will shorten the shelf life of the beer.

Now I’m using the SS brew tech brew bucket, and this has a tap at the bottom of it. So what I could do, the simplest thing would simply be just to turn this tap on, open up my keg, and then just sort of pour it directly into the keg. 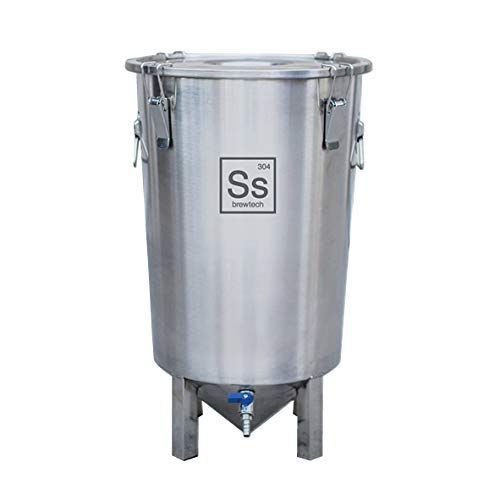 With rotatable racking arm and ball valve spigot assembly, this fermenter prevents any airlocks you might encounter. Conical bottom allows trub to settle out nicely, 304 stainless steel construction, 6.95 gallon maximum capacity, is easy to clean, is stackable during ferment, and stackable for storage.

The problem with that is there’s going to be a lot of splashing and a lot of oxygen is going to get mixed in with the beer.

So what I do is I use the dip tube of the keg. So I’m going to connect up my fermentation vessel with the liquid outpost of the keg and then send the bid down the dip tube into the bottom of the keg.

And that will minimize the amount of splashing and therefore the amount of oxygen that’s getting mixed in. Now to keep the beer flowing, I need a way to get rid of all of the air that’s currently in this keg away for it to escape.

So I’m just using my gas connect to here, connected to absolutely nothing which I’ll put on the gas post. And that way as beer comes in, the air can escape out the other way.

So using this approach, I am minimizing at least the amount of splashing that is resulted from the beer moving into my keg. But I’m certainly not eliminating oxygen altogether.

I mean the keg is full of oxygen to start with. So as the beer goes in, it could end up mixing with that oxygen a bit. Um, and as this drains, I am allowing a layer of oxygen that is on the top of this fermenter, um, as, as the beer drops down.

So the ideal thing to do would be to do this whole thing under pressure of CO2 and just eliminate oxygen completely.

Now this fermentation vessel of brew bucket is only rated for one PSI of pressure and I’m a little bit concerned about putting any sort of pressure into this brew bucket. So that’s why I’m using the system that I’m using. But Hey, if you’re doing pressurized transfers, I’d love to hear how you’re doing it.

I’ve moved the beer into my freezer where I will chill it down to 60 Fahrenheit. At that point I’ll add my yeast WLP O29 German Ale Kölsch yeast.

I have Joe here with me to taste the Kölsch. Welcome Joe. Thank you. Now this beer has been conditioning for about four weeks now since fermentation, it came down to two 1.008, And it ends up as a 6% beer.

So after all of the hassle of brewing this beer with a cat on your lap, what do you think about the, uh, the color first of all of this? It’s a golden looks. Nice. Wheat color. Yeah, it’s a little cloudy still. Um, I think if I conditioned it a bit longer, maybe it would be less cloudy, but, um, yeah, it looks the part. Okay.

So then what about aroma? A mild hoppy smell to it. It’s not as malty as I would expect, but it smells light, yeah. Yeah. Alright. Well let’s see what we think about the taste. Tastes good.

Malty. Yeah, it is. It is. It’s tastes a lot more to them. It smells, I think. Yeah. The other thing that they say about this beer style though is, uh, an ale like this would just take like two weeks and it’d be done, but this one you’re supposed to condition it and age it for a little bit and then it has a really short shelf life apparently.

So I’m going to be interested to see how this beer tastes different in a few weeks. Um, hopefully you won’t be around, but that’s the good point. That if there is any, uh, yeah, probably not. Alright. Well hope you enjoyed it. Cheers. Cheers. Thank you.

Yeah, absolutely. You can tell me what you really think. No, it’s, it’s good. You could drink eight of them and please do. I’ve got so much beer. I need someone to drink this damn beer. Get that man a beer!