I like to think Ole’ Leo was referring to homebrewing, and specifically to SMaSH beer – the model of brewing simplicity.

What’s a SMaSH beer you ask?

It stands for Single Malt and Single Hop

I recently discovered it while spending way too much time on my favorite forum, HomebrewTalk. Inspired, I created my first SMaSH homebrew using Vienna Malt and Simcoe Hops.

Here’s the idea. You brew a beer using only one type of malt and one type of hop. That’s it.

Homebrewers will immediately see that this is contrary to current brewing wisdom. In these days of imperial this and barrel-aged that, a beer this simple seems like a trip back to the caveman days.

And therein lies its beauty.

A simple beer recipe can taste just as good as a complicated one.

It Makes you a Better Brewer and Beer Drinker

The great thing about SMaSH beers is that they train you to identify specific ingredients. In an IPA with 5 hop types, it is near impossible to pick out one particular variety.  Same goes for a recipe that uses 7 different malts.

With a SMaSH beer, you know exactly which malts and hops contributed the flavors and aroma you experience. You can use that knowledge to pick out those flavors in other beers and to improve your homebrewing recipes.

Technically an American Pale Ale, it’s got a pleasant toasty flavor from the Vienna malt which also contributes a dose of sweetness to balance the beer.  The moderate simcoe hopping gives off pine and citrus flavors and are very aromatic. In short this beer is crisp and refreshing while maintaining great taste.

Plus now I know exactly what Vienna malt and simcoe hops taste like.

The recipe is below for those wishing to try their hand.

I think Leo would be proud of this beer.

SMaSH Brewing isn’t just for the all-grainers any more.

Since my first mash was an all-grain recipe, it was straightforward to buy a single type of grain. My savvy readers, however, cleverly asked if it is possible to brew a SMaSH beer with malt extract, since extract may contain more than one type of malt. From a purist’s standpoint, a SMaSH beer can only hold that title if a single malt was used.

This sent me down the path to answer the question: Can you truly make a SMaSH beer from malt extract?

Malt extract is basically concentrated wort, or sugar-water that allows brewing without the more extensive equipment needed for brewing all-grain. It comes in both dried (DME) and liquid (LME) form. But what malts (and how many) are used in making malt extract?

It’s not too easy to tell. Most homebrewing websites don’t say exactly what malts constitute the extract they sell, but everything I’d heard said that they’re usually a blend of malts.

I had more success going directly to a manufacturer’s website. Look at the description for the Briess Light Extract:

Even in their light-colored extract, Carapils is added to the base malt.  orry, no SMaSH using Briess.

Were there any extracts made from only one malt? Not giving up hope, I turned to the trusty HomebrewTalk forums to find out.

On this thread, I met Chris who was pretty sure that Muntons Light DME was 100% pale malt. He contacted Muntons to verify, and Lo and behold:

Dear Christopher, Our Pale Malt will only ever have this one type of malt in. We don’t blend with carapils. Good luck with your brew.

So there you have it. You can brew a true SMaSH beer using Muntons DME, which only contains pale malt. Here is the extract version of my recipe, substituting pale malt for the vienna malt. 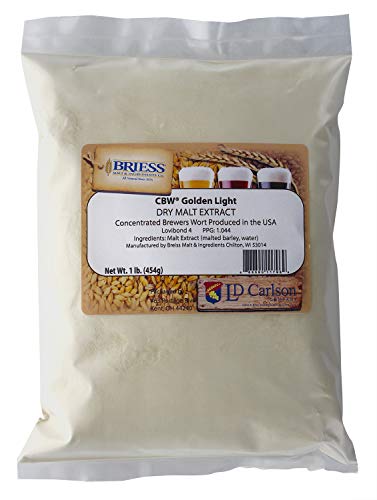 As someone on HomebrewTalk pointed out, even if you use a blended malt extract, it is still a valuable learning experience. You can try different brands and see which ones taste the best. Learning is the point, after all.

Still, for a homebrewing geek like me, it is satisfying to know that my SMaSH is really a SMaSH.

– Ryan who first asked this question and is also the inventor of the kSMaSH, the “kinda SMaSH” brew for when your extract is just kinda pure.

– Chris, who contacted Muntons and got the valuable info. He’s also a fountain of brewing knowledge and spreads it around by teaching his buddies.