How To Brew Irish Extra Stout

Irish Extra Stout, as Gordon Strong once said, is the Irish Stout’s older brother. The history of Irish extra stout is actually the story of Arthur Guinness.

The beer was first brewed in 1821. Guinness’ set out to brew his superior porter as the story goes.

Arthur Guinness started brewing in 1759 at the St. James Gate Brewery in Dublin, Ireland. He leased the brewery for 9000 years. With only four acres of space and with only very little brewing equipment, Arthur Guinness built successful trades and was able to export his beer to Great Britain by 1769.

It was the extra stout that really put Guinness on the world stage.

Arthur Guinness II took over the role as owner after his father’s passing. By the 1830s, St. James Gate Brewery became the largest brewery in Ireland. Under Arthur II, the recipe for a type of porter was written down. This beer was known as Extra Superior Porter. It was a slightly stronger bee designed for the British market.

This beer is still brewed today and is known as Guinness Extra Stout. Guinness describes the beer as a “more full-bodied beer with a deeper characteristic roasted bitterness and a rich mature texture.”

The color is jet black and rather opaque.  A creamy-soft, long-lasting tan to brown head is expected for this style.

Aromas of coffee coming from the roasted barley is common for the style. A slight chocolate, cocoa, and a slight graininess is present too. Esters are low to medium, but usually not present at all. The same can be said about the hops.

The mouthfeel is smooth despite the high hop bitterness and high amount of darker grains. There should be a creamy quality to the palate with low carbonation and a full mouthfeel. Astringency might be present but should be low.

Typically the style has roasted coffee-like flavor as well as dark chocolate that lingers on the palate in the finish. More complexity is added with the background notes of mocha, biscuit, and vanilla flavors. Medium-low to no fruitiness. Medium to no hop flavors.

Irish stouts possess some wonderful tones of chocolate, coffee, and malt that pair greatly with rich foods. Pork (or any protein) with mole sauce, Kansas City-Style spareribs with barbecue sauce, a burger, beef and stout pie are all great ways to pair an Irish stout with food.

Tips for Brewing your own Irish Extra Stout

When considering the grain that you should use for an Irish stout, think about the unfermentable or complex sugars that might be added to the grist. Single and two molecule sugars are easily fermented. Some complex sugars can be broken down to simple sugars.

However, the more complex sugars that are added in your mash, the more unfermentable sugars are likely to be left. Try avoiding crystal/caramel malts, Munich, Vienna, any Carapils, or dextrin malts. High quality pale malts and Golden Promise should be considered.

Achieving the dark color and roasty quality of this beer. Consider dark chocolate, roasted malts, and black patent all can give you the darkness and roastiness you need in an Irish Stout.

English hops, such as Fuggle and East Kent Goldings (EKG) should be considered when brewing an Irish Stout, with Fuggles at bittering and EKG for aroma and flavor. The main objective when hopping an Irish stout is to find that balance between the roasty malt and the bitterness of the hops/

White Labs WLP004 Irish Ale and Wyeast 1084 Irish Ale are good choices. Follow the temperature recommendations with any yeast that you pick.

Mash temperature is very important to achieve a good dry stout. The right mash temperature will convert the complex sugars into simple sugars that can be fermented out. A mash temperature between 140°F and 150°F (60°C – 65°C) will give you the most beta amylase activity.

Irish Extra Stout the By the Numbers

Transcript: If I say the word Guinness to you, the first thing that probably comes to mind is this. This is Guinness, dry Irish stout. But Guinness is a brand. It’s not a individual beer style. And in fact, they do a whole bunch of beers, Like these….

Now, even though I haven’t actually brewed anything yet, let’s just briefly talk about serving. I’m going to serve this beer on nitrogen. I’m going to be using this attachment for my Nukatap set up, which will convert my tap to be a nitrogen serving tap. 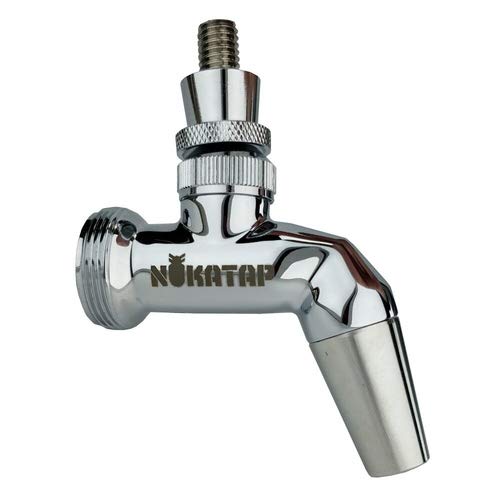 Now, if you order a Guinness at a bar, a dry Irish stout it normally comes in nitro. So typically you’ll get a Nitro pour of Guinness that creamy foamy head looks beautiful, so forth.

Whereas Irish extra stout, at least the Guinness version is typically just served on CO2. Well here to the Homebrew challenge we like to mix things up a bit. So last week’s beer, my dry Irish stout, I just served that on CO2 and this week’s beer, the extra stout I am going to put on nitrogen because I’m quite curious how it will turn out.

By the way, I’m using a new camera set up this week. It’s amazing when you have your own YouTube channel, how you can so easily justify to yourself that you need just one more piece of tech.

Now I mentioned this beer is a little stronger and a little higher in the ABV department. We’re not talking about any sort of crazy American Imperial stout levels here. We’re talking about 6.1%. So looking to build a beer with an original gravity of 1.061.

The recipe for this, well, I’ve gone with a fairly simple tried and tested recipe. So I’m using 75% Maris Otter. That’s my base malt. And then the other two malts I add, well, I’m adding flaked, barley and roasted barley in a sort of a two to one ratio in favor of flaked barley. So I’m adding 17% of flakes, Barler, and 8% of roasted barley.

This one smells delicious. I’m mashing in at 152 Fahrenheit or 67C.

Now, I can’t talk about brewing Irish Beers without talking just a little bit about my Irish heritage. Now, at least here in the US it’s quite trendy to say that you are Irish.

I am English. I was born in England and then moved to America quite some time ago, but my mum grew up in Ireland, in County Wexford in a little Irish farmhouse near to Bunclody. That’s me visiting as a kid.

Now, the pub has traditionally been always a very important part of the social structure of any town and village in Ireland. And as I was looking through some of these pictures that my mum sent, I was kind of interested to notice that a lot of these pubs actually combine being a pub with a funeral directors. Apparently the cold storage that was used to store the beer kegs is also ideal for storing dead bodies.

Anyway, I’m hoping that some of this Irish heritage is going to shine through and capture the spirit of Ireland in this beer.

The hops for this beer, for the bittering hops, I’m using Target hops. Now, if you are brewing a five gallon batch, you would throw in about a bag of target hops at 60 minutes. We’re looking to get a contribution of about 41 IBU from that. And then with 10 minutes to go, I’m going to throw in another bag. This is of Fuggle hops, which are going in for the aroma and flavor.

Now, while the beer is boiling, let’s talk a little bit about serving on nitro and there are two parts of this. There’s the serving through a nitro tap. We’ll cover that in a little bit, but there’s also the consideration of the gas used to push the beer from the keg through the tap.

Now, typically for most beers, you’re going to use this. This is a canister of CO2. You can use this to carbonate the beer and then to serve it. However, for nitro beer, you need, this might be a shock,… nitrogen. So to do that, you’re going to need a different canister.

What you want to serve beer is something called beer gas. And beer gas is a combination of 75% nitrogen and 25% CO2.

So this is what I’m actually going to be using to serve the beer. Now, the regulator that you need for a nitro or a beer gas canister is different from CO2. So in addition to getting that tap handled, you are going to need to look into getting a regulator that works with nitro as well.

Yeast in this one is Wyeast 1084 thats Irish ale yeast going to ferment this about 68 Fahrenheit or 20 Celsius, then bump the temperature up at the end. Gravity came in at 10 60. So going to let this beer do its thing ferment, and then get it ready to be served on nitrogen.

So here is the nitro pour with Lauren to taste. Now the nitro part of this, the way that I did it was I, um, I carbonated to about half the level I normally will be the C02. So I put it at 30 PSI for about 12 hours and then I moved is on to my beer gas where it’s now being served at about 25-30 PSI of pressure and it’s come up pretty good, right?

It looks good. Yeah. It looks the part. I love how nitro beer looks of the beer itself could be God awful, but it would look the part. It looks very pretty. Yeah. And what are we getting on aroma? Very similar. I think to last week’s beer, the, the Irish stout.

I have to agree on that. Yep. So first off, I didn’t know if we had to do the three drink limit like last week. So I just kept going until you stopped.

Well, I think you should always, you should always go for the 3 gulp drink with this. Um, I’m not going to argue with your father on this one. I think he’s absolutely right. Yeah. Creamy mouthfeel. Absolutely. I, I’m definitely a bit of a sort of stronger taste. Um, I’m getting than last week. So what do you think?

See, I disagree. I agree with the smoothness and stuff, but I don’t think it tastes as strong as the other one, which actually makes me like this one better than the other one. Yeah. Like, and I was, I’m not usually a fan of stouts and heavies and stuff like that. Cause misconceptions. Um, but yeah, I think I prefer the feel of this one to last week.

So I think maybe because this one was poured with the different tap and stuff, um, is giving it more of a mellow taste, but it’s still what you want to drink in the beer.

Well, that is it for Irish Beers, but we are not going far away from the style of stout for a little while. So a slightly different take on stout for next week, but for now, cheers, cheers.