German Leichtbier, pronounced LYESHT-beer, is the German version of the Light American Lager. It was made for the everyday common working man. In the BJCP Guidelines it is noted that a German Leichtbier is marked as a diet beer with lower carbohydrates, alcohol, and calories. Other than that, not much is mentioned on the interwebs about this beer style.

To be fair, German Leichtbier and American Light Lager are similar only in color and ABV. German Leichtbier is closer to a German Pilsner due to its surprising bitterness. Not so much in the IBU range, which is only 15 – 28.

However, in its Bittering Unit to Gravity Unit (BU:GU) ratio. In terms of numbers, 22 IBUs give off quite the bitterness level with a gravity of only 1.034.

Style Profile and Characteristics of a German Leichtbier

Light to very light body and medium to high carbonation. Smooth and well-attenuated.

German Leichtbier by the Numbers

Tips for Brewing your own German Leichtbier

When deciding your recipe for a German Leichtbier a good quality German Pilsner malt should be used as the base grain. Victory malt at a small-ish amount can add the toasty background flavor. The Victory malt will add a level of complexity that this light beer needs. Victory malt is known for adding a layer of dry toasted complexity and a tiny bit of color that will assist in the beers already pale complexity.

Typically you may want to stick with German noble hops for a German Leichtbier. Styrian Goldings can also work quite well due to its earthy and herbal flavor that persists in a finished beer. A half ounce of Hallertau at 5 minutes left in the boil and then an ounce of Saaz at flameout will round out the hop additions. This will leave you with a clean, bitter flavor that is floral and herbal.

Chill the wort to 58°F (14°C) and hold it there for around 5-6 days. Allow for the beer to free rise to 70°F (21°C) at the end of fermentation to assist in diacetyl cleanup. Once the beer completes fermentation and after the diacetyl rest, you want to cold crash it to 35°F (2°C) for about 4 weeks to improve clarity. 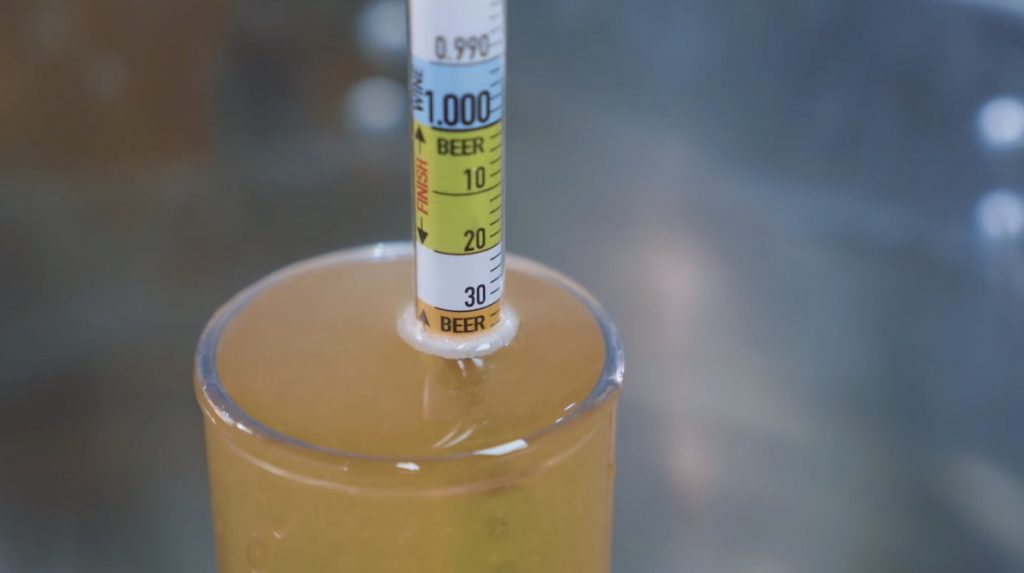 The Leichtbier is the German equivalent of American light lager. We’re going to brew one up and talk about packaging hops.

Hi, I’m Martin Keen and I’m taking the Homebrew Challenge to brew all 99 BJCP beer styles and todays beer really reminds me of the very first beer I brewed. American light lager, which Wit Baker told me is more or less brewed for the smallest amount of flavor possible in a beer.

But I think unlike American light lager, which really is brewed to taste like nothing that this light beer really does actually have a bit of a hoppy characteristic to it.

So whereas American light lager had a IBU of 1.000,, the Leichtbier that I’m brewing is going to have an IBU of 23 and given the very low gravity of this thing, we’re talking around 3% ABV when it’s done. Then I think that hoppiness is really going to come through. 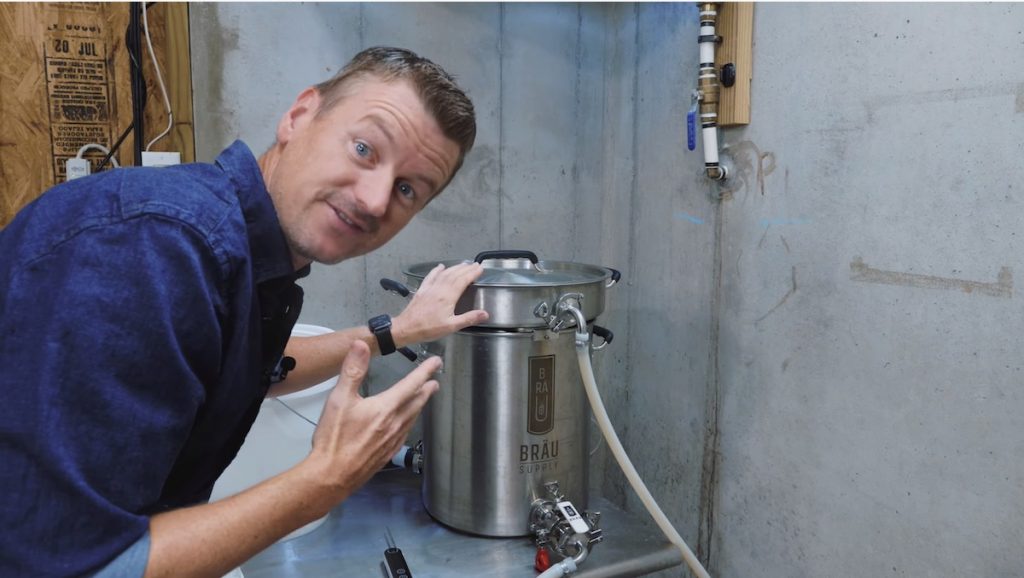 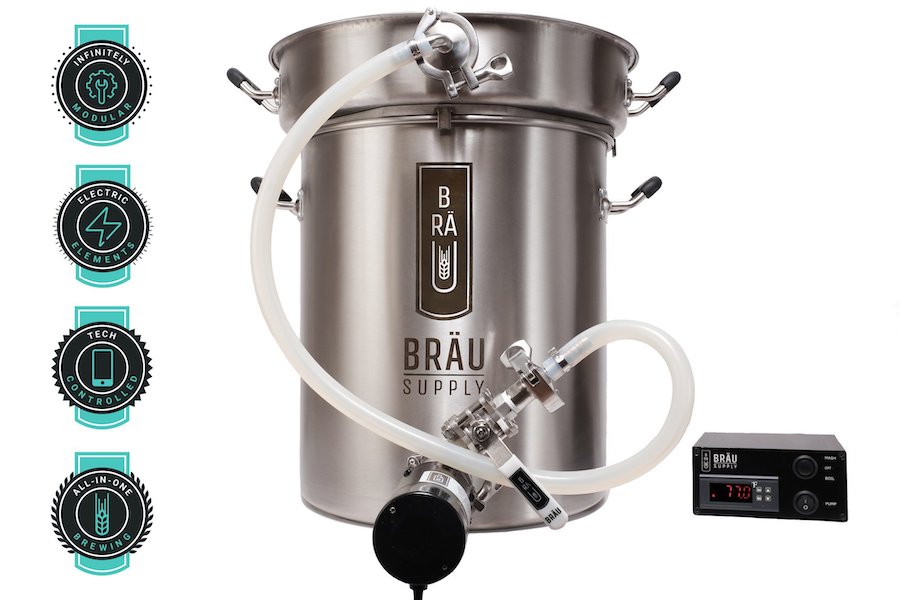 The grist for a beer like this, super simple. For the base malt, I’m using six pounds of German Pilsner malt.

And then for the specialty malt, I am using eight ounces of victory malt. Going for final gravity of 1.032. I’m mashing for about 60 minutes at 152 Fahrenheit. 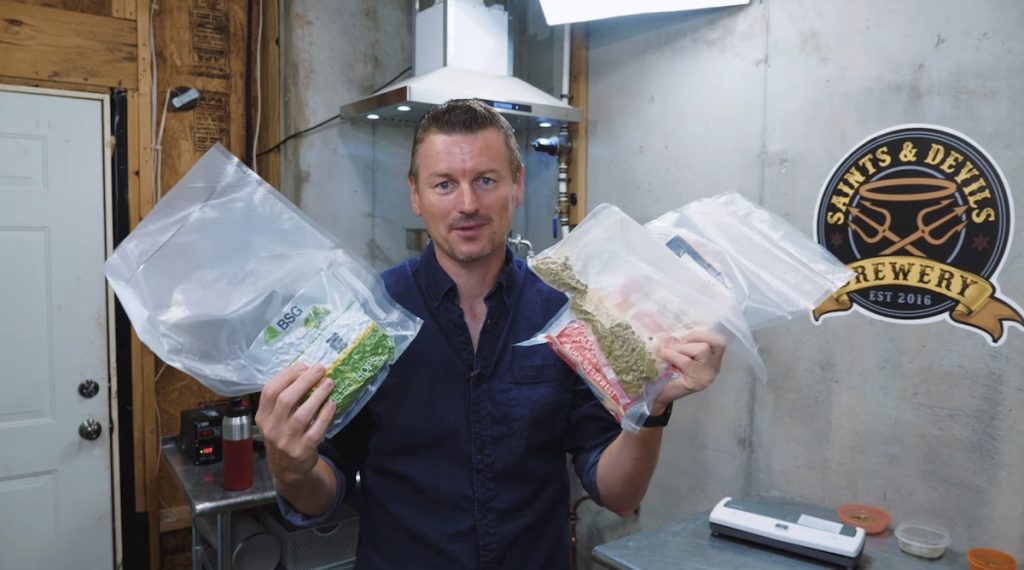 So let’s talk a little bit about hop storage. I keep my hops in the freezer and because I’m brewing so frequently, I need a lot of hops. So I have in my freezer here, two containers just filled with hops. In container one I have hops a through C and in container two I have hops D through Z. There are a lot of hops beginning with the letter C, it turns out.

Now hops, of course, come in different sizes. This is probably the most common size that you would see at the home brew store in the US at least, this is one ounce of hops. And I used to be that I would just go out and buy a whole bunch of these every time I needed to do a brew. That is not very practical when you’re brewing every week it would mean I’m at the home brew store all the time and it also kind of gets a bit expensive.

So you can also buy hops in much bigger bags. This is one pound versus the equivalent of 16 of these one ounce sizes. Uh, it’s much cheaper to buy like this. And what I’ll typically do is I’ll look out for a sale. So this, I got these from Yakima Valley hops. Uh, they typically have great black Friday sales, so I’ll go out and just buy a bunch of hops there. Now the issue is if you’re buying big bags like this, you’re definitely not gonna use them all in one batch.

So how do you go about storing them? So my approach to this is to use a very inexpensive vacuum sealer. That will make sure that we get all the air out of the hops when they’re stored in the freezer and should extend their life. 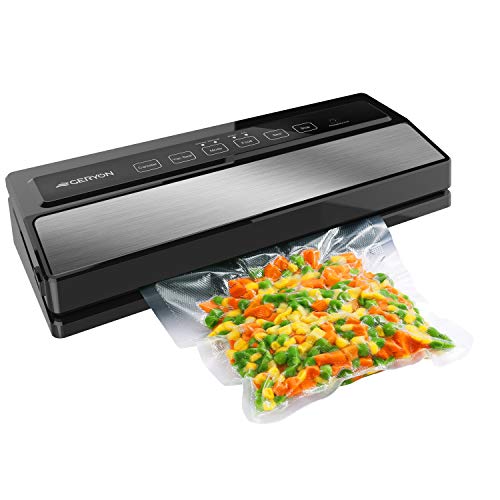 Now I’ll make the bags much bigger than they need to be because each time I cut them that way I have room to reseal them again without having to use a new bag. And that’s how I’m able to keep a fresh supply of hops around every brew day and to do it where it’s not quite so expensive as buying those individual packets. 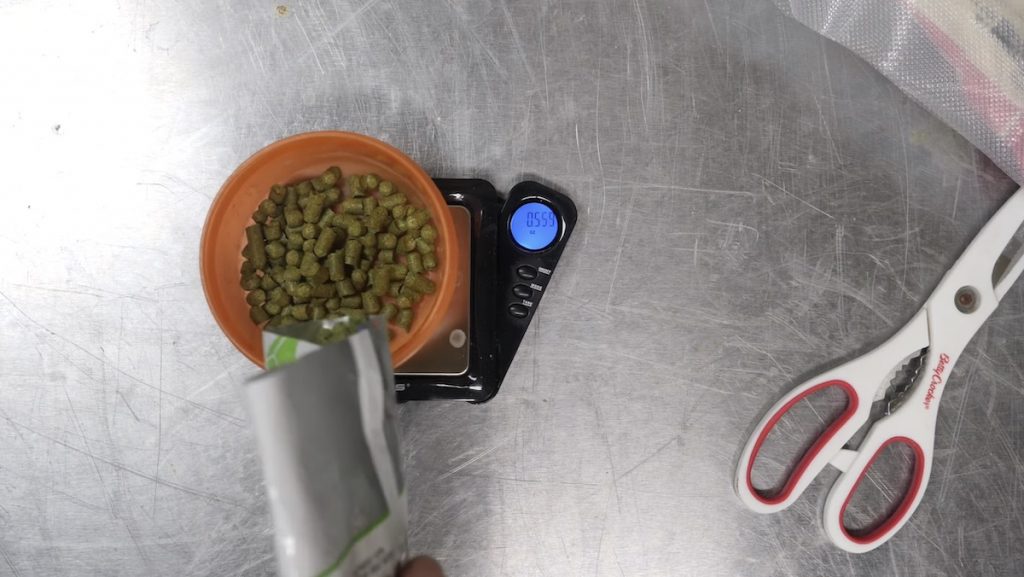 And speaking of hops, the hops for this one, for the bittering hop, I am using one ounce of Styrian Golding that goes in a 60 minutes. Then at five minutes I am using Hallertau Mittelfrüh hops. Those will go in five minutes from the end. And then at flameout I’ve got one ounce of Czech Saaz hops.

So big news with this one after weeks and weeks and weeks of brewing Stouffer’s lagers and leading to get them down to really cool temperatures. This week I’m brewing the beer as and ale, Oh yes.

This is WLP029 German ale yeast and it needs to be pitched at 65-70 Fahrenheit, which has no problem. I’ve been able to cool it to that. So rather than doing my usual thing of sticking my wort in the chest freezer and coming back later when it’s cooler and adding the yeast, I’m going to pitch the yeast right away. 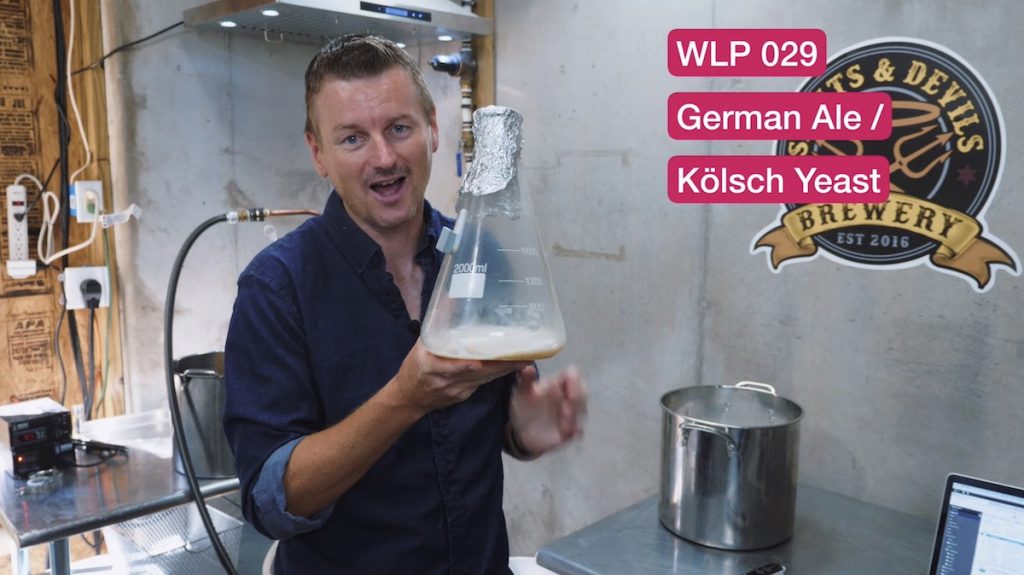 So it’s time to taste the Leichtbier.

And I’ve brought back Cody, now, Cody, you were here for the very first beer in the challenge, right. Which was American light lager. And now we are on German light lager. So you are my Mr. Light lager. Awesome.

So what do you think about the color of this one? Is it sort of light and lagery? I’d say so.

It’s pretty on point with how lagers should look. I tell you, I tell you what I am pleased about where this beer actually is in carbonation. It’s got like that big foamy German lagery sort of head and it’s going crazy in the glass.

So, um, I mean that’s not really a quality of the beer, it’s just how much carbonation I gave it, but I think it looks the part. Germans are going crazy with their beer. Yeah, that’s right. 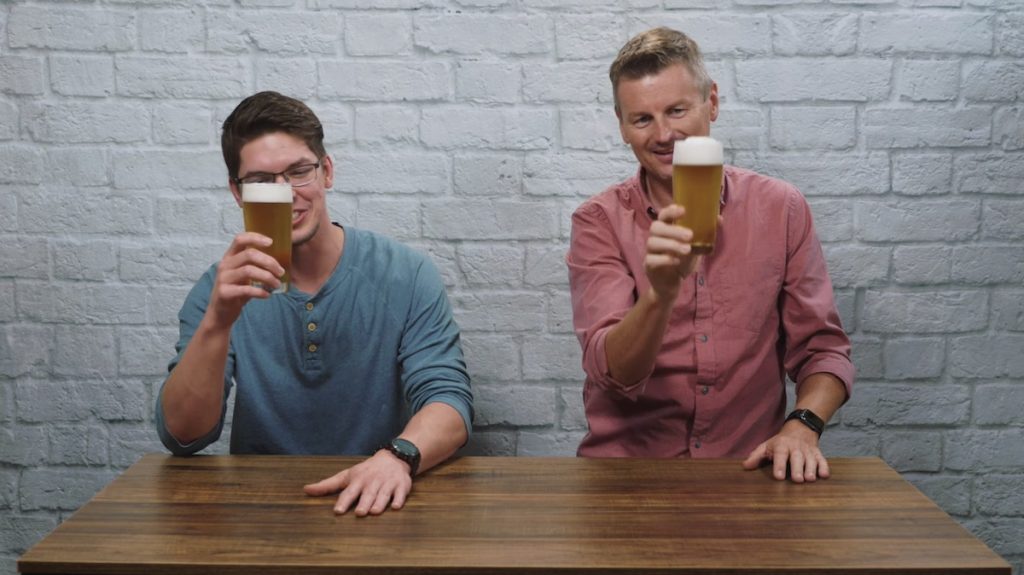 Okay. So, okay, let’s, let’s, let’s go for the taste. Favorite part. Wow. That’s really smooth. Yeah. That’s got a nice aftertaste to it. So it’s kind of like earthy almost. Yeah. And at 4%, um, I get a bit worried with these really light beers that there’s not going to be really anything going on. Yeah. Um, but actually there’s a, there’s a sort of a, it’s got character, character to it, right? Yeah, for sure.

So I don’t know how well you remember the American light lager, which I think you described as like a good Miller light or something. What was it? Uh, a “mill-air” light. That’s what it was.

That was right. And to me at least, I think there is some sort of enjoyable quality in this beer, whereas the American light lager was just like fizzy alcohol to be honest. Yeah. Well 4%, probably enjoy quite a few of these, so that’s a bonus. Quite a few, that’s for sure. Alright, well cheers. Cheers.

So we have so far away from Hopium right now, but it’s coming, so. Okay. I’ll bring you back for like a more hop-forward beer. Yeah, that sounds good. No more light lagers.