How to Brew American Brown Ale

American Brown Ale is a style that contains tasting notes that include: roasted malt caramel, and chocolate and a low to medium hop flavor and medium to high hop bitterness.

U.S. homebrewers who were inspired by English style brown ales and porters spearheaded the project of making brown ales in America.

As history tells us, prior to 1850 dark beers were the beers of choice for several years. However, pale beers then became increasingly more popular and the dark beers fell to the waste side. Thanks in large part to the Newcastle brewery in Scotland, the English brown ale was brought back and became its own unique style.

Meantime in America, the brown style was still pretty much unknown. Some colonists tried recreating the English style and usually added molasses to the beer. It wasn’t until the 1980s and the craft beer revolution did the American Brown Ale become noticed.

Everything is bigger in Texas

The popular saying, “Everything is bigger in Texas”, has almost become a bit of a clique but still rings true here. A group of homebrewers from Texas aimed to make a “bigger, bolder” brown ale. In order to contend with this rich sweet concoction, more hops were needed to reach the harmony these Texans were set out to brew.

Many American brewers followed suit and tried to replicate what these Texas homebrewers brewed. The best example of this came from Pete’s Wicked Ale.

The color of an American brown ale ranges from a light tan/amber to a dark almost black mud color. The head is bone white in color to light khaki with a low to medium volume.

The aroma of dark malt, even more so than an English brown ale, but should not reach that level of a porter. Sweet in malt character with notes of caramel, chocolate, nutty and/or toasty.

There should be a hop aroma but it will still be below mid-level in hop aroma. Often American citrusy hops are showcased. Fruity esters should remain low and the hops set out to balance the malt sweetness. Beer should never contain any diacetyl.

For the style there should be a harmonious balance between the malt and hops. Mid to high malty flavors of chocolate, toast, and caramel is very common. Mid to medium high hop bitterness with a modest American hop character for the hop flavor.

A medium dry finish leaves with an aftertaste of both malt sweetness and hoppy bitterness. Low to moderate fruity esters. Diacetyl should be low if present at all.

Medium to medium-full body should be expected of this style. Moderately high carbonation. Hoppier examples may be perceived as drying. Some alcohol warmth with stronger versions.

When it comes to pairing an American brown ale with food, the balanced malt and hop profile really helps to pair the beer with food. Ambers pair well with bbq chicken, sausage, burgers, spicy foods, and seafood.

Tips for Brewing your own American Brown Ale

The grist for an American amber is usually some sort of American pale malt; usually domestic 2-Row. The base malt should make up 85% of the grain bill. Crystal malt will add complexity, depth of character, and color to this style.

Amber malt can be considered with or instead of crystal malts. Keep the Amber addition to one-quarter to three quarters pound in a five-gallon batch. As for specialty malts, consider the following: Aromatic, Special B, special roast chocolate malt, and black malt (less than 2%).

The use of American hops is how the American brown ale differs from its English counterpart. Usually Cascade is a favorite hops to use for the style, also Mt. Hood, Willamette, US Goldings, and other varieties.

Some recipes call for multiple hop additions, even dry-hopping. Try to target a 0.09 to 1.0 bitterness or BU:GU ratio.

An American yeast strain that is clean, neutral, and well attenuating is probably best for an American brown ale. White Labs American Ale WLP060, Wyeast American Ale 1056 both work well. Also, dry yeasts could work well here too, such as Danstar Nottingham or Safale US-05.

American Brown Ale the By the Numbers

Transcript: When I think of the beer style of a Brown ale, I typically think of the English variety, something like Newcastle Brown.

But there is an American version of Brown ale as well. And that is what I’m brewing today. I’m also going to have a go at roasting my own malt.

And that beer style is really divided into a Northern English and Southern English version where the southern English style really emphasizes sort of rich caramel sweetness. Whereas the Northern version looks more for a nutty characteristic in the beer.

In terms of my American Brown ale, I’m building a beer with an original gravity of 1.055. So about five and a half percent ABV. In terms of the grist, I’m adding in 71% of pale two row malt, and then 13% of Amber malt. More about that in just a second. In addition, I’m adding in at CaraMunich I at 9%, I have 5% of special B and 2% of chocolate malt.

So as you may have gathered the Amber malt that’s in the mash right now, I made that. What I did is I took some pale two row malt and I roasted it to become Amber malt. And here’s what I did.

So I took the pale two row malt and I put out onto a baking tray. Then I set my oven to 350 Fahrenheit, 177 Celsius and threw it in there. So we’re effectively kilning our malt here by putting it in the oven, you’re going to leave it in the oven for, uh, between like 25 and 35 minutes, but you’re going to want to keep an eye on it.

What you’re looking for in terms of appearance is a pale copper color, and it’s worth just giving the, the grain of try as well. And you’re looking for sort of a nutty toasty taste. I mean, you just want to be careful. You don’t take it too far. And that with a fully roasted malt. For me, 25 minutes was enough pulled out that grain tasted delicious, put it into my grain mill, crushed it up. Now it’s mashing away with the rest of the ingredients.

Hops for this beer I’m using for my bittering hop; cascade. We’re looking to get, uh, an IBU of about 27 from this beer and by adding in a bag or one ounce of cascade at 60 minutes, that will get us about 20 IBU.

Then I have a mixture of Cascade and Willamette, and I’m going to be adding that in as my flavor and aroma hop addition, which does smell delicious. I’m going to write that in with five minutes to go.

I’ve been having a bit of a running battle with hydrometers and test jars in that I keep breaking them. And I had a whole bunch of both of these things. And now this is all I’ve got left. I find that I keep chipping these things. And as you can see here, this one is not in the best of state.

And Oh my goodness, these hydrometers, I’ll just move them around the brewery. And then whoops, tap them on a surface. Uh, and then they shatter and there’s these little black beads in here that go everywhere. So I got a new hydrometer set because I know I’m going to break this sooner or later. Let’s take a look. 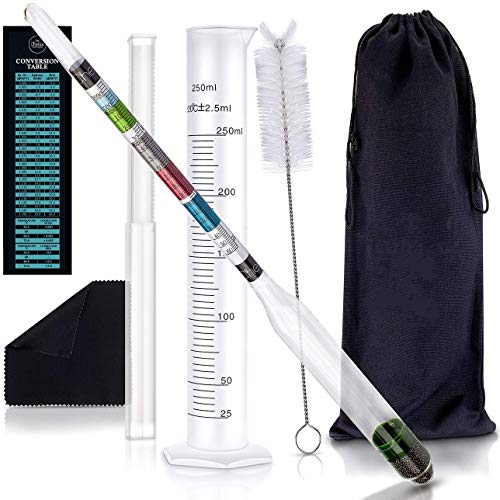 So I found this on Amazon. Let’s open it up and take a look what we’ve got.

Okay. So we’ve got a new testing jar. I quite like this one because it’s got, um, measurements along the side here. It also feels a bit more sturdy than this thing. This one here, uh, perhaps lasts me a little bit longer. There is a cleaning brush as well, which we can use to clean out the test jar. And of course the hydrometer itself, this one looks much like my other one actually. And um, this one measures in specific gravity and also in Plato, as you would expect.

So now that I’ve got my new homebrewing equipment, let’s give it a try.

Beer in the fermenter. I have been using my fancy new hydrometer and measuring jar. And that tells me that I got an original gravity of 10 55.

Now for the yeast, for this beer, I have made a starter of American ale yeast. This is Wyeast 10 56. This is a, a nice clean strain that I think will go pretty well with this beer.

So I’m going to put this in the fermentor, going to ferment at 68 Fahrenheit, 20 Celsius, and then give it a taste.

It’s Brown ale tasting time with Lauren. So do you remember back a few months ago now? You tried the English Brown ale. Vaguely. Vaguely.

First of all, does it look like a Brown ale? Yes, yes. Yeah. It looks Brown, right? Dark, dark Brown, dark Brown, but the honeycombed glass has a little bit of like, Amber has to be mentioned every single time we use that. It’s so beautiful. Yeah.

Whoever makes these glasses? These were bought for a dollar at the dollar store, so not much commission to be money there. All right. So the Brown ale is Brown. Does it give us any sort of aroma, especially with the hops that we added to this one? It smells like the English brown ale.

Now I think it’s got the sort of the roasted, um, the roasted maltiness of, uh, you know, sort of a Brown that I was, I was used to drinking growing up.

It’s like a sweet, creamy, thick and light all at the same time, like combined into one. Now, this is really nice. Yeah, that’s really good. I’m not sure I’ve ever had an American Brown ale before. I’ve had plenty of Northern English Brown ales, but this one with that little bit of hop character to it, I think really adds something.

This is, this is wonderful. So next week we are darkening things up once again with something.

Please look forward to it Lauren. Fantastic. Yup. But until then,…

Let’s do the cheers!