When American Light Lager is discussed in beer circles these days, the macro beer companies are front and center in our minds. Who can blame us?

Mass marketing, low prices, and our own perceived dogmas of what beer was years ago play into our beer consciousness.

Jeff Alworth from the popular beer blog, Beervana, posed an interesting poll question on social media some time ago. He began by saying, “It’s much harder to make a pilsner than an IPA. Pilsners are so simple you can’t hide anything, but you can always just add more hops to an IPA. So let’s put ‘em to a poll.”

Personally, I agree with the statement that Pilsners/Lagers are harder to make than IPAs. Out of 220 participants, 194 people agreed with this statement as well. I don’t need to know the P- value of this survey to know this is significant. With a grain bill and hop schedule usually fairly simple, there is really nothing to hide behind.

The Germans to the Rescue

Until the mid-1800s, Americans enjoyed many of the same beers that were popular In Europe. These were usually higher strength and dark in color. The early colonies did not allow Americans to grow barley as well as the Germans. As a result, using a combination of 2-Row and 6-Row was more economically sound than the high import prices. Also, up to 40% of flaked rice or corn as an adjunct.

Due to political and religious freedoms being sought, America saw a rather large influx of German migrants. One of these brewers was David G. Yuengling. Like many immigrants who are looking to recreate the tastes of their motherland, these German brewers, like Yuengling, were interested in recreating the Bavarian lagers of their homeland.

With barley slowly becoming available in the states, it was not of the same quality the Germans knew back home. The addition of adjuncts, such as rice and corn, were added to their recipes.

Like many times throughout Europe, these beers were brewed with the working class in mind. It was common for many to have a beer or two at lunch in a saloon. The low alcohol provided in this beer allowed men to not be overly intoxicated when they went back to work. Handling heavy machinery and alcohol just does not mix, even back then.

Americans were left with a vague recollection of what this American Light Lager should taste like by the end of prohibition. Breweries were left with the task of trying to brew what their customers remembered. Bottom line here is breweries would do anything to brew what their customers wanted. Women also began drinking more beer during prohibition in speakeasies. At the end of prohibition, breweries had a whole new market sector. This paved the way for light beers to dominate the American drinking culture.

Werk Force Brewing Company in Plainfield, IL brews an American Light Lager they call Ol’ Pile. Many breweries are brewing their light lagers with a higher original gravity and then diluting the wort with filtered water. Brandon Wright, co-owner of Werk Force told me that they brew their wort in the upper 1.090s and then liquor back.

The finished beer is at 4.5% ABV. I must say it is an incredible beer. If you are around the Plainfield, IL, make sure to check them out and order yourself an Ol’ Pile.

Straw yellow to pale golden yellow in color. Head will be extremely white and foamy but will not have good retention.

Aroma is rather subtle. If present at all, it will lean more toward grainy with slight sweetness and possibly some corn quality. If hops are present at all, they tend to be lightly floral or spicy. Clean fermentation, but may have some traces of green apple and light DMS is not a fault.

Quite neutral in flavor, tending to be more grainy or corn-like flavor. Crisp and dry finish. With a low to medium hop presence, hop flavor tends to be more floral, spicy, or herbal. Low hop bitterness. The taste tends to side more with the malt and a sweet corn-like presence.

Tips for Brewing your own American Light Lager

The grain bill for an American lager is pretty simple and straightforward. The base malt is usually 2-row or 6-row or a blend of the two. This will make up around 60 percent of your grain bill. Corn or rice adjuncts should make up the remaining 40% of the grain bill.

The IBU range is fairly light with an American lager. Keep the IBU range at around 8-18. This can be achieved by a bittering hops at 60 minutes and that’s it. There is really no need for aroma or flavoring hops with this style of beer. The hop variety for this style includes: Cascade, Chinook, Magnum, Cluster, Liberty, or Crystal.

Fermentation temperatures should be in the neighborhood of 50°F (10°C).You can also lager it at 32°F(0°C) for four weeks. This is a beer style that should be consumed fairly quickly, so drink fresh.

American Light Lager By the Numbers

So this is it. Day one of the Homebrew challenge to brew 99 beer styles one per week. And what better way to start it off then, by brewing a bud light?

Hello, I’m Marty Keen. And welcome to my, uh, my basement brewery. Where for the next, well, two plus years I will be brewing each of the 99 BJCP beer styles. We’re starting today with 1A, a top of the list, American light lager.

Alright, while I get ready to mash in, let’s hear a little bit more about the beer style of American light lager. 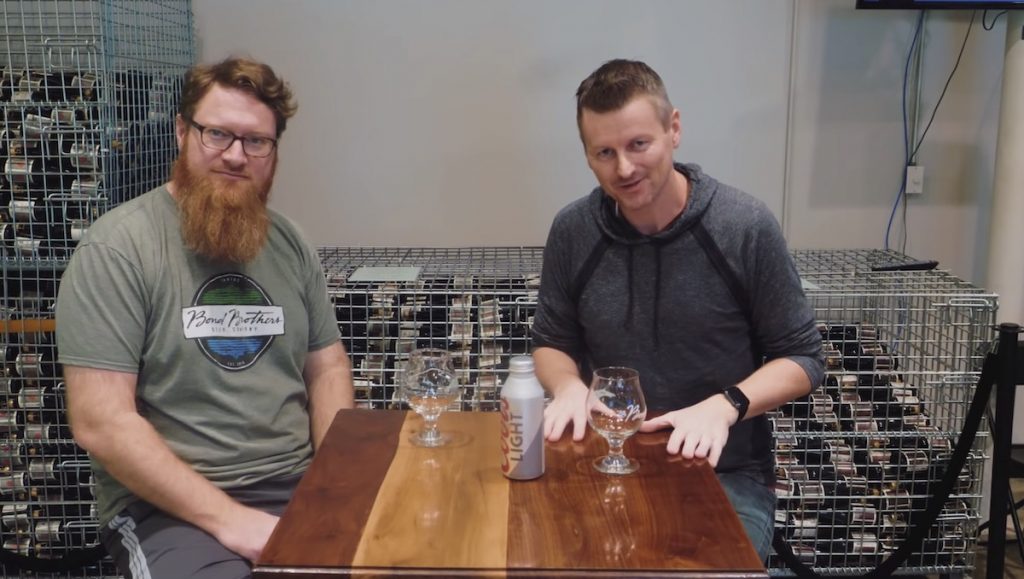 I love Bonds brothers brewery in Cary North Carolina. And I’m here with head brewer, Wit Baker. Hey, welcome. Hey, how’s it going? Somehow they let me through the door and this nice brewery with a Coors Light. So what I’m pouring it, do you want to sort of describe, um, what are the characteristics of this sort of beer?

Yeah, sure. So, um, uh, one day American, my lager is a style that is more or less brewed for the smallest amount of flavor possible in a beer. So it’s, it’s a more like an alcohol delivery system. Um, you’ll notice that in the style guidelines, uh, it’s like low to none on most aspects, whereas, uh, other styles would say, you know, medium to hide something.

So, I mean, I read in the guidelines that one of the recomendations, regardless to flavor “almost no flavors.”

Yeah, exactly. So, uh, you’re literally trying to take the smallest amount of barley with the maximum amount of either corn, rice, sugar or something. Um, and ferment it cold enough that you’re getting no esters.

And so these guys tend to be more, uh, flavor positive than the style guideline indicates. Um, you’ll notice we’re drinking out of a, uh, glasses with a lib on the top to capture aroma. So we’ll smell stuff like if you smell this, it’s definitely not me. It’s not low, right? It’s uh, it’s medium or so I’ve got a medium corn kind of a sweet aroma. It don’t like, it smells generically sweet, but then you also have the corn thing. And if you swirl for a couple of minutes, that’ll go away. But so those are the esters from fermentation.

And so while it may smell at first, like it’s higher than the style guide that indicates, um, all these people were talking about like Coors, Miller, ABI, um, have, uh, enough money invested in their lab work to hit the same number of esters and aldehydes and phenol, every time they brew it. So it’s very intentional.

All right. Well, we tried it. This tastes to me, it tastes like college. Oh, that’s very, yeah. I don’t think I’ve had it since. Oh, that’s fair. Okay. Thank you very much. Thank you. Yeah. Thanks for having me.

So let’s talk about ingredients. I have four pounds of two row and four pounds of Pilsner malt in this six gallon batch. And then, because this is a light beer, you can add a large amount of adjunct and you could use rice or corn. I’m using flaked rice, 2.5 pounds of that. So that’ll bump up the ABV a little bit, but still give us that really light beer flavor. And I’m using rice because, well, we wouldn’t want to use corn would we? 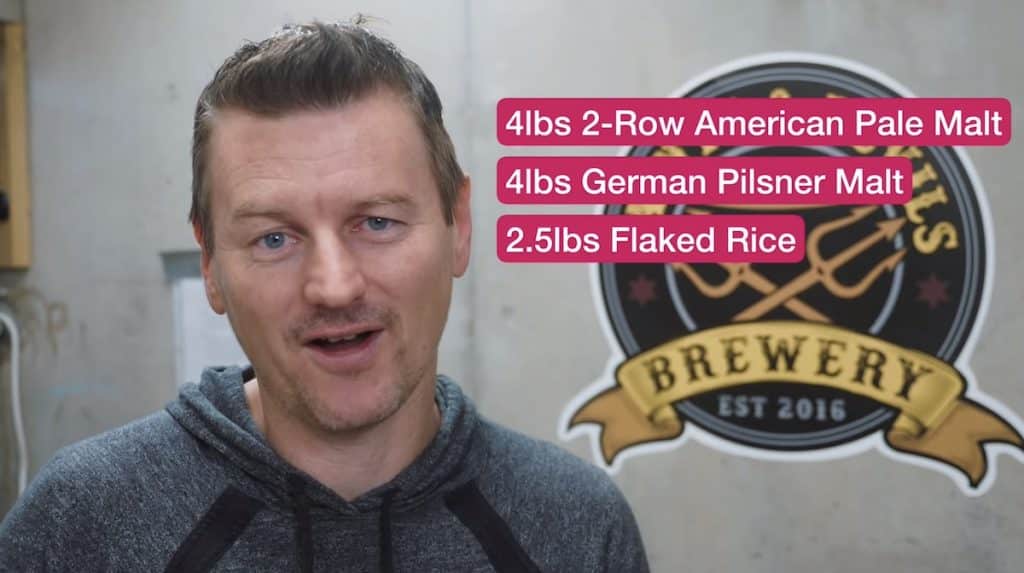 I still remember the first time I had a Bud Light. I’m originally from England. And at the time you couldn’t really buy bud light there. But I went to Vegas with a bunch of buddies and we found this kind of run down old casino and they had video poker at the bar. And to our absolute amazement, we found that if we sat at the bar and played the video poker, they would bring us free bottles of bud light.

For a bunch of Brits, this was mind blowing. So we try to optimize the experience by playing the video poker as slowly as possible. Well, necking the bud light as quickly as we could to maximize our gambling dollars into bud light. Had we known, we could have just gone to the gas station around the corner and bought bottles at 50 cents ago. Maybe we wouldn’t have bothered, but at the time we felt like we were geniuses.

This beer style is not exactly known for its hoppiness. So I have a one ounce of Hallertauer hop pellets. Here. We are going to put in for one hour as the bittering hops, its the only hop that’s going in. And that will get us to a mighty IBU of 11. All right, one hour to go. This is going in.

Yeast is WLP840 American lager yeast. That is reportedly the Budweiser strain. I did a starter of this and I’m going to pitch this in at 55 Fahrenheit. And the final gravity has come in at 1.040, which was what we’re aiming for. So that’s the end of Brewday and the we let if ferment and try it out. 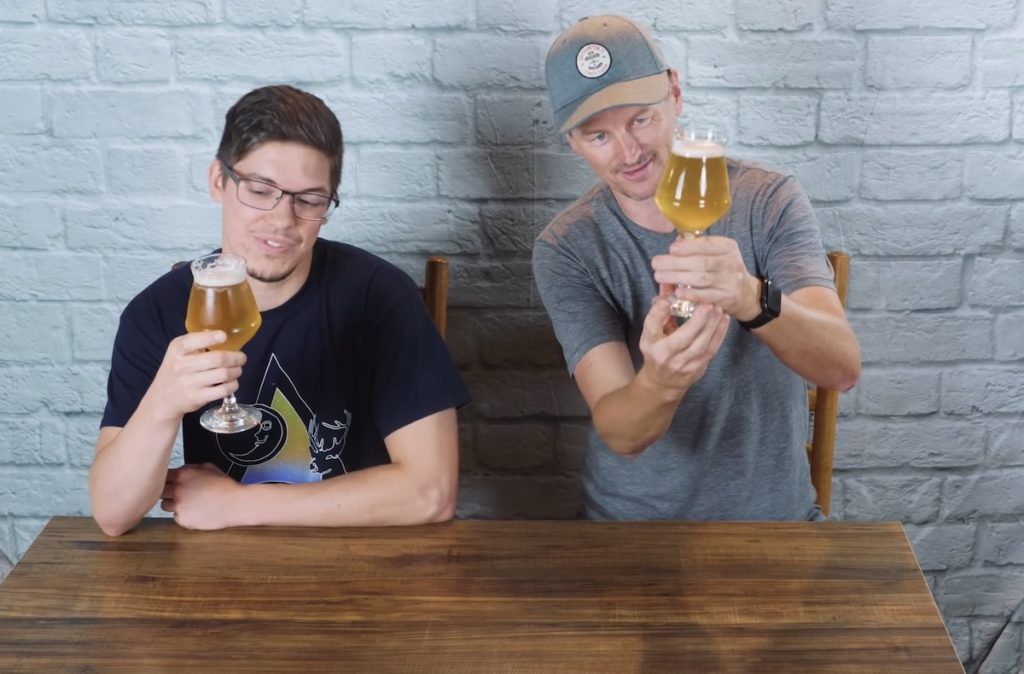 So its tasting time. And I’ve got Cody here to help me out now, you know, it’s, it’s light beer. So we thought we’d to fancy it up by putting it in these nice glasses.

So what do you think of, of appearance? First of all, we’ll by putting up to the white, it’s kinda like reminds me like Bolton gold. You know what I mean? It’s not much to smell. Oh yeah. I’ll get light-headed trying to get the fumes out.

If I were blindfolded, I might not know that there’s a drink there, because it smells of absolutely nothing, but that’s good because it’s not supposed to have much of of a smell. Um, which is also the same thing with taste.