International Amber Lager does not have a storied past like some beer styles. There are no backstories that points to this particular beer being involved in some conspiracy or trade between two kings. Rather it is a style of beer included in the 2015 Beer Judge Certification Program (BJCP) Style Guidelines, along with international pale lager and international dark lager, as a “mechanism to describe a group of beers with similar tastes”, as Gordon Strong suggests.

Upon researching this style, I stumbled on some interesting details. Many of the commercial styles do not actually contain the words “international amber lager.” Instead these beers are labeled as other styles. These beers include, but not limited to: Capital Winter Skal, Schell’s Oktoberfest, Dos Equis, Brooklyn Lager, and Yuengling Lager.

As Strong continues to explain, “this style was invented to describe certain types of beers that are mass-marketed industrial lagers that are darker than pale but paler than dark, yet don’t have the intensity of malt flavor of beers such as Vienna lager, Märzen, and Czech amber lager.” The International Amber Lager category in the BJCP guideline really tried to allow homebrewers a chance to enter these beers into competitions without judges unfairly penalizing them for not having exactly the same intense flavor or bitterness in traditional amber lager styles.

Much of what we know and think about beer is due to our senses. The old adage that we eat (or drink in this case) with our eyes is certainly true, especially for the newer “styles” that have emerged over the years. Although International Amber Lager is categorized by its color, these beers do not need to be strictly amber. The color can range from amber hued gold to reddish-copper. To correlate with Stong’s assertion of the style being more inclusive as opposed to exclusive, it would make sense to allow color variations with the style.

Golden-amber to reddish copper in color. Brilliantly bright clarity, with a white to off-white non-lasting foam.

Low to moderate malt aroma which can be rather grainy, with a low or moderate caramel sweetness. Also can be toasty-malty aroma. Hop aroma can range from low to none at all with floral or spicy character. Clean lager fermentation. Slight DMS or corny aroma is acceptable.

Light to medium body with medium to high carbonation. Smooth and creamy.

Salty, spicy grilled or roasted meat is a great contrast to the sweet, bready notes of the beer. Burgers and seafood pair well with this style as well. Alpine style cheese brings out the beer’s light caramel sweetness and nutty malt notes. Also, contrasting the beer’s flavors with a pairing of a spicy pepper jack cheese.

Tips for Brewing your own International Amber Lagers

The base malt for this beer can be 2-Row, higher protein 6-Row, or Pilsner malt. To add on to the biscuit, cracker-like character, some Munich malt will get you there. An addition of Victory or Biscuit malt can help too. A moderate addition of Crystal 60 can help to achieve the light caramel flavor and the color of an amber,

The hops are pretty straight forward here since they really do not need to shine in this beer. A good bittering charge at 60 minutes is mandatory since you want to achieve that sweet and bitter harmony between the grain and hops. A very light flavor or aroma hop addition can be optional. It would be a wise decision to stick with German noble-type hops here. If you decide to use American hops to achieve that true “international” sense of the word, then American hops that mimic noble characteristics work really well here. Avoid citrusy, piney, dank, tropical or other overly aggressive hop profiles.

Ferment at 50°F (10°C) or whatever your yeast manufacturer suggests until your final gravity is reached. It is a good idea to increase the temperature by about ten degrees at the end of fermentation to assist in diacetyl cleanup. Once the beer completes fermentation and after the diacetyl rest, you may want to cold crash it to 35°F (2°C) for about 4 weeks to improve clarity.

International Amber Lagers By the Numbers 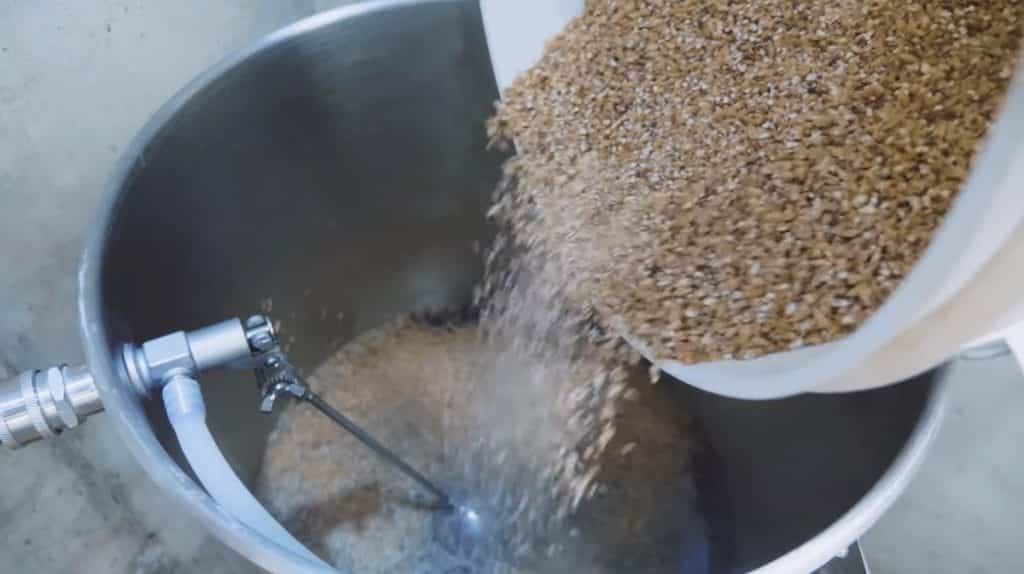 After five straight weeks of brewing, nothing but pale beer, it’s time to add some color. Let’s brew some international Amber lager.

I’m thinking about getting a new brewing system. It’s not that there’s really anything wrong with my existing one. It’s just, I’m using it in a way that it wasn’t really intended. It’s a Blichman breweasy. And overall, this is a pretty great system. It’s fully electric with a two vessel setup where you mash in the top kettle and through a pump, water comes out at the bottom of kettle and recirculates through for the mash. When the mash is done, you simply drain into the bottom kettle and boil from there.

Now, the way this works is there’s an electric heating element in the boil kettle at the bottom, and that needs to be submerged with water the whole time, but it doesn’t often leave a lot of water left to recirculate the mash. 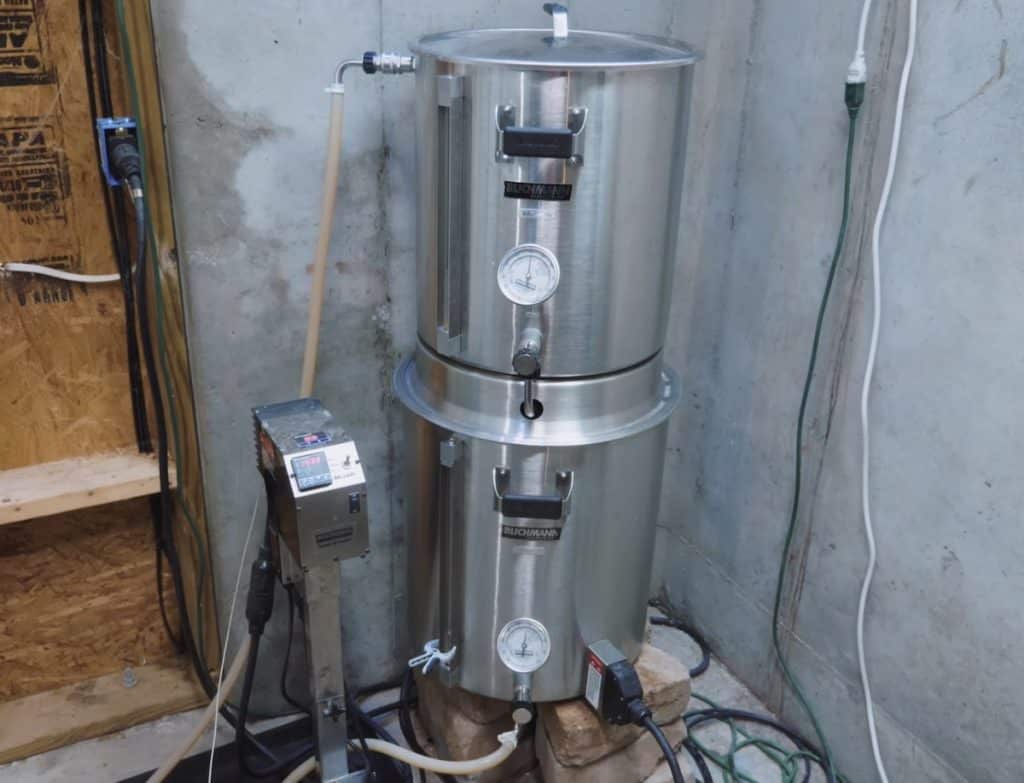 So the first problem is then balancing the amount of water. So there’s enough to mash up the top kettle while keeping the heating element exposed on the bottom kettle. That involvels messing around with the auto ?? to get it on just the right setting. And that can take a few attempts.

And meanwhile, the strike water temperature is dropping during my mash. By the time I get this all sorted recirculated properly, the 160F strike water is probably down to about 125. So then I have to slowly wait for the temperature to creep back up again, which is firstly dropping my mash temperature below where I wanted to be. And secondly, costing me quite a lot of time.

There are other little issues too, like the fact that they built in the thermometers on these setups are below the water level while I’m mashing. So I can’t use them to tell what the actual temperature is. So it would seem that I’d be better off with a beer system that matches the batch size that I’m brewing. I want it to be electric. I want it to have a pump and I want it to give me a short brew day,… I’ve got a few ideas in mind. 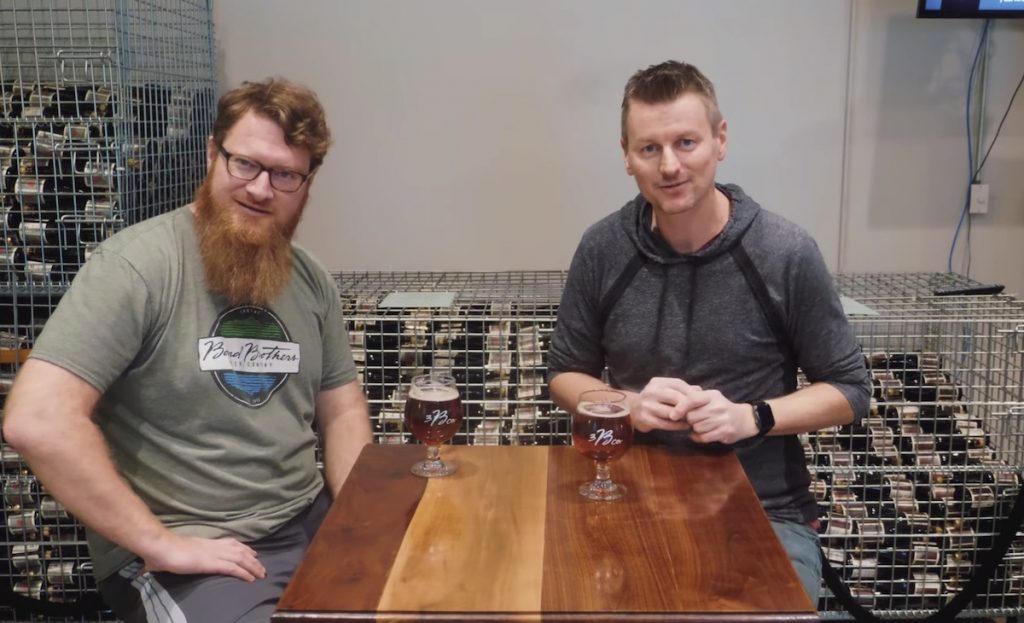 I’m back at foam brothers with, Baker what are we drinking? So we’re drinking two different beers, but they’re also the same beer. Um, so we have a beer called, uh, Cedar street copper, uh, which is our copper lager. Uh, and this side over here, cut it with half water. So, uh, we, we used half water and half CO2 copper to come out with a 3% session ale that, uh, looks and tastes very similar to the somewhat classic example, a Negra Modelo. It’s really, really, it’s pretty, it’s pretty similar, right? Yeah. So, um, and this version, the 7% version is, um, kind of like a material way more intensive, but you actually can try the activity. So, um, uh, you’ll notice if you can look closely to the difference of color too.

Um, even though this has, uh, close to brilliant clarity for lager, uh, the half water, half lager is even clearer and where this has a red tone, this has kind of an Amber Brown tone.
Uh, well, yeah, Amber and international lagers are kind of a, um, high adjunct typically. So we use 20% corn you expect, and you should get darker flavors than a light lager where there should be some caramel. Um, there should be some sweetness. There should be some hop, uh, flavor, and you can have this like copper to light copper, even red, red being a hard color to get because every red beer you see, no matter how red it is, Roden box, a really good example of red beer, um, is a combination of yellow and Brown, not actually red. Everything’s a combination of yellow and brown. Yeah, pretty much in beer. That’s some combination of Yellow + Brown. Yeah. That is the entire pallet. Once you add fruit to it right? 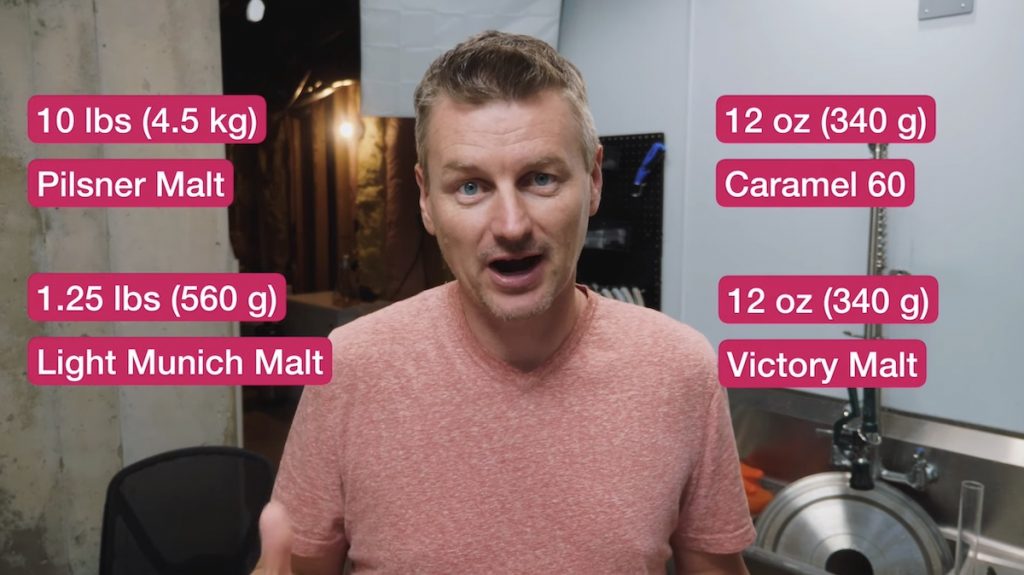 Now, the recipe for this one, it’s based on a German Pilsner malt base, I’m brewing six gallons and I have 10 pounds of German Pilsner, then light Munich malt, one pound 4 ounces of that. And then 12 ounces each of caramel 60 and victory malt. that should give me a beer with a gravity of about 1.050. So it’s going to come out around 5%. Going to mash in you know, 152 Fahrenheit.

Okay. Mash went well. It’s time to add the first hop addition, the bittering hop, I’m using one ounce of Pearle hops. They go in here at 60 minutes. And then at the end of the boil zero minutes, I am putting one ounce of Hallertau hops in.

So the yeast I’m using German lager yeast, that’s WLP830 and that’s going to go in at 55 Fahrenheit. 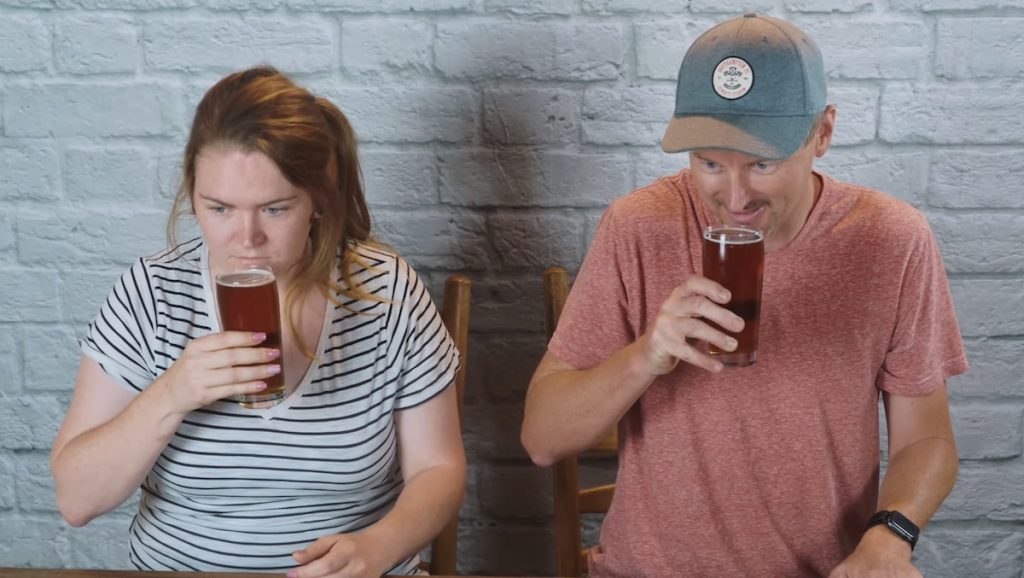 This is the beer, international Amber lager, I’ve got Laurn here to try it with me. So, first of all, Lauren appearance, is it Amber? Uh, yes, it is very Amber. It definitely looks the part. So let’s see how the aroma is. Okay. So hop aroma, I would say is none. No, I don’t have any. Grainy, malty, yes definitely. It’s sweet. I would say a little sweet, um, malty and quite English. I taste more of the malts than I did smell the malts, but it’s very smooth and I do agree with English. Alright. I think this came out success. Yep. Cheers!