The history of International Pale Lager was not crafted out of ingenuity, but rather out of opportunity. So it was not some truly remarkable beer that was being created, but instead an answer to the American Lager that was crafted in America. After the 21st Amendment was signed, American breweries were moving toward American Lager styles.

Due to years of prohibition, the American drinkers were eager to drink what was available to them. Internationally, brewers sensed what was working in America. Brewers from across the pond needed to create their version of this now widely successful beer. We see this time and time again with beer. We also see beer as the common thread that ties us all together.

If you are thinking about commonalities among people in the world, look no further than beer. Beer has proven time and time again to be the international language that we all can understand, appreciate, and respect. Without trying to get too political, beer really is the common link that unites us all.

The International Pale Lager, often marketed as Premium Pale Lager, is a highly-attenuated pale straw to gold colored lager without strong flavors. Typically they are well-balanced and highly carbonated. International lagers tend to have fewer adjuncts than standard American lagers.

The broad category of international mass-market lagers range from up-scale all-malt lagers to the typical export lager. They are often confusingly labeled as a Pilsner. Generally more bitter and filling than American lager. Less hoppy and bitter than a German Pils. Less body, malt flavor, and hop character than a Czech Pilsner. More robust versions can replicate a Munich Helles in flavor, but with an adjunct quality.

Often these International Pale Lagers fall behind the dreaded 8-Ball during packaging. The skunky taste in beer that has become synonymous with Heineken or Corona has everything to do with the green or clear bottles these beers are packaged in. The reason for this off-flavor is because of the blue light waves that cause a chemical reaction to the hop isohumulones, which are the acids that make beers bitter. Not even a simple lime can mask the skunk bomb that is created due to poor choices in bottles.

Light to medium body with moderately high to highly carbonated. A slight carbonic bite can be present.

Taste is grainy-malt flavor with a crisp, dry, well-attenuated finish. Grain character can be neutral. Light bready-crackery quality, or corny or malty sweetness. Hop flavor ranges from none to medium. Hop taste is floral, spicy or herbal character. Hop bitterness at medium-low to medium. A light amount of DMS is acceptable.

Tips for Brewing your own International Pale Lagers

The grain bill for this recipe is fairly basic; think somewhere along the lines of a simple Pilsner or Kolsch. Since it is a lager, a good quality Pilsner malt is where you want to start off. Pilsner malt will give you the biscuit taste that you wish to achieve with this beer. There was some conflicting information that I discovered while researching the style. Some suggest 2-Row or even 6-Row being used as a base malt.

Vienna malt is up next to add a little bit of color and grainy/malt interest. Acidulated malt and Crystal 10 at around a quarter pound each. These two malts will give you a nice bright acid along with some sweetness that the guidelines require. Finally, there could be some flaked corn or rice added. If those are used, use them sparingly since the style guidelines do not call for a heavy corny flavor or aroma.

The hops really do not shine or standout with this style. Honestly, any hop you have on hand will do. Keeping your IBUs at around the low teen or 20 mark will suit you just fine. Some Saaz, Tettnang, or Northern Brewer all can work well at around the 15-10 minute mark. This combination of hops can keep the hop aroma along that spicy, floral, or herbal quality which is what you are looking for here.

Ferment at 50°F (10°C) or whatever your yeast manufacturer suggests until your final gravity is reached. It is a good idea to increase the temperature by about ten degrees at the end of fermentation to assist in diacetyl cleanup. Once the beer completes fermentation and after the diacetyl rest, you may want to cold crash it to 35°F (2°C) for about 4 weeks to improve clarity.

International Pale Lagers By the Numbers

After starting the Homebrew Challenge with four American styles, it’s time to head overseas to brew international pale lager. I set my iMac up down here in the brewery so that I could edit my videos as I go. But do you think it looks a little bit out of place?

Yeah. Anyway, today is international pale lager day. And even though this style, isn’t the most flavor forward of beers. It is the beer style that I grew up with when I started to drink beer a lot in England, and I’m looking forward to brewing this one. Now, while I get the water heated up, ready to get started, let’s hear from a professional brewer about this style. 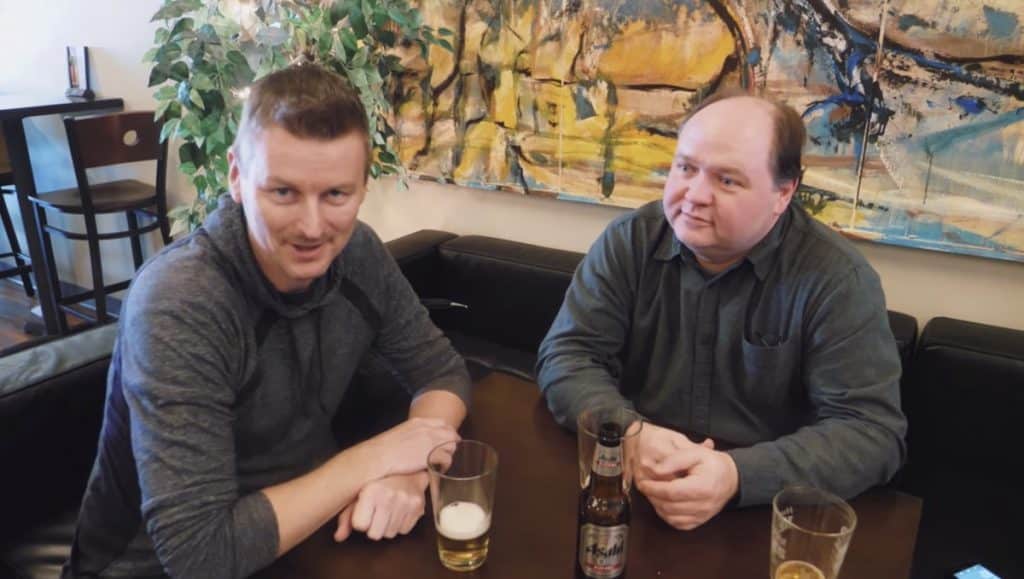 I am in the mod in Pittsburgh, North Carolina, with Thomas Vincent. Hi Thomas. Hi, and today we are sampling international pale lager. Delicious, delicious tastes like summer. I’m looking forward to, it tastes like not an awful lot. I think it’s the right bucket.

So just tell me a little bit about the style of what we’re looking at is basically the European equivalent of Budweiser. It has a little more malt backbone. There is definitely a little more character to the beer than say a Budweiser would have, but overall flavor, depth and profile is nowhere near as say the Cheque pilsners or anything in that kind of ballpark. Um, there is a mild graininess to it. It does, it has a bitterness to balance, but it isn’t really as strongly hop to character profile. And oftentimes you see the views examples are the notorious of anything. Among them, Heineken being of course the classic.

But if it turns out right, it’s a nice, easy drinking beer that you can enjoy with a Curry or what have you. Right. And we were talking earlier about, um, how this style travels and people will. I know people have been tight Heineken factory and they’re raving about Heineken and how great it tastes, you know, the stuff that you get here in the US is nothing to write home about it. It seems like that is an issue with some of these beers and the travel really does make it tuff. And if you think about it, if it’s on a ship for that long, a distance and traveling, it will impact the beer. Thankfully being this will aside being super dry brewed in Canada actually made the trip in a pretty good fashion. Yep. So lets, let’s give this one a try. So he’s a super dry Japanese beer made in Canada and there’s a little sweet and a little bit of malt and that’s about it.

There’s not even really much bitterness to it. There’s no eye contact, any bit of this, really, you get your Miranda, you get your Heineken, you get to something like this, and that will absolve you. You know, if you’re at an airport bar and you’re looking for a quick beer with that delicious airline to, yeah, this will serve the purpose. Okay. As well with airline food. That’s an interesting use for it. Yeah. I mean, it’s pleasant enough, right? It could be a lot worse. It could be a lot. That’s all right. Well, that’s always a promising way to start a beer, cheers. 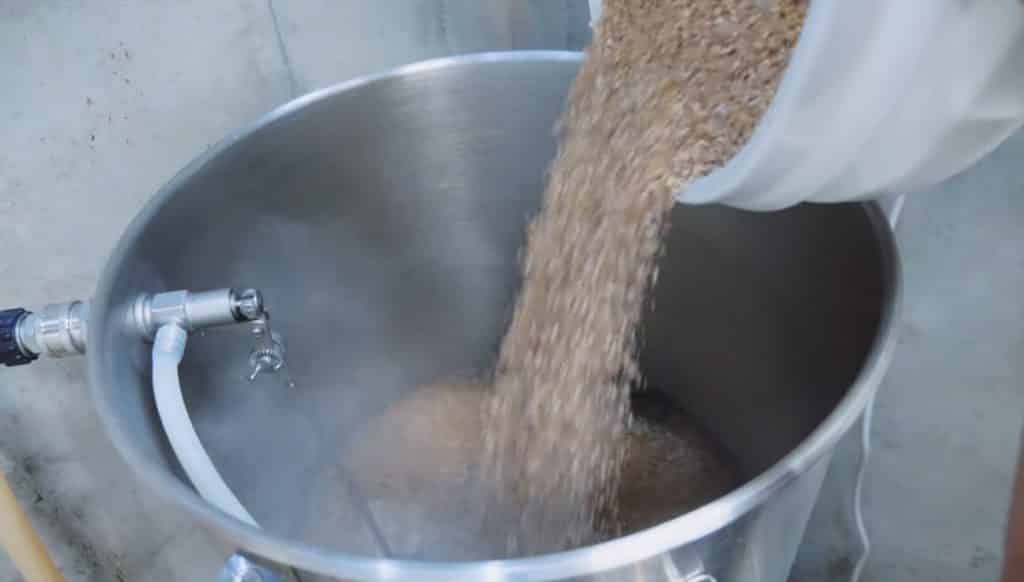 So ingredients for this beer, you can use two row pale malt for this. If you want, I’m going to use Pilsner malt and 11 pounds of that. And then just to give it a little bit more character, I’m going to put one pound of the Vienna malt in with the grist. Now for specialty malts, I am using just a touch of acidulated malt, just five ounces of that. Just to give a little bit of bite to the beer and then another five ounces of caramel 10, just to add a little bit of sweetness, 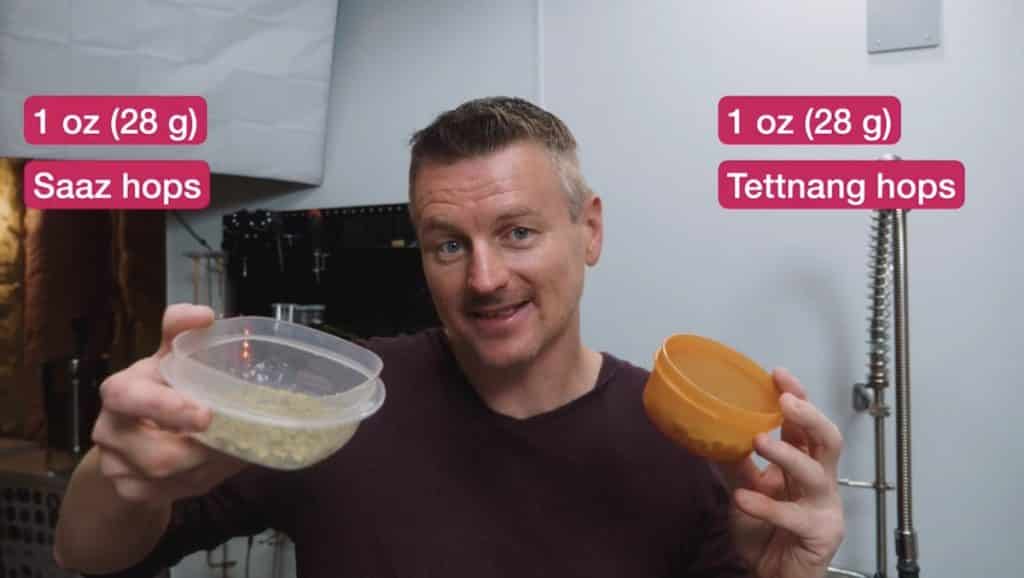 So let’s talk hops. The IBU on this is between 18 and 25, and I’m going to go right up to 25 because I want a bit more of a bitter of beer than the Sawhe he was. I am using the Chinook hops as my pitching hop. I have no 0.4 ounces of this going in at 45 minutes as my bittering hop. Don’t need much of this because it’s a high alpha asset of 11%. And then with 10 minutes to go, I’ve got one ounce, each, a TettNang for floral and Saaz for herbal, in they go.

Chilling the beer. Now this is a lager. So I probably not gonna be able to get it all the way down to the recommended fermentation temperature of 50 to 55. So I will just chill this as much as I can, and I’ll put it in my chest freezer and let that do the rest. The yeast that I’m going to add is white labs, WLP830. This is German lager yeast. 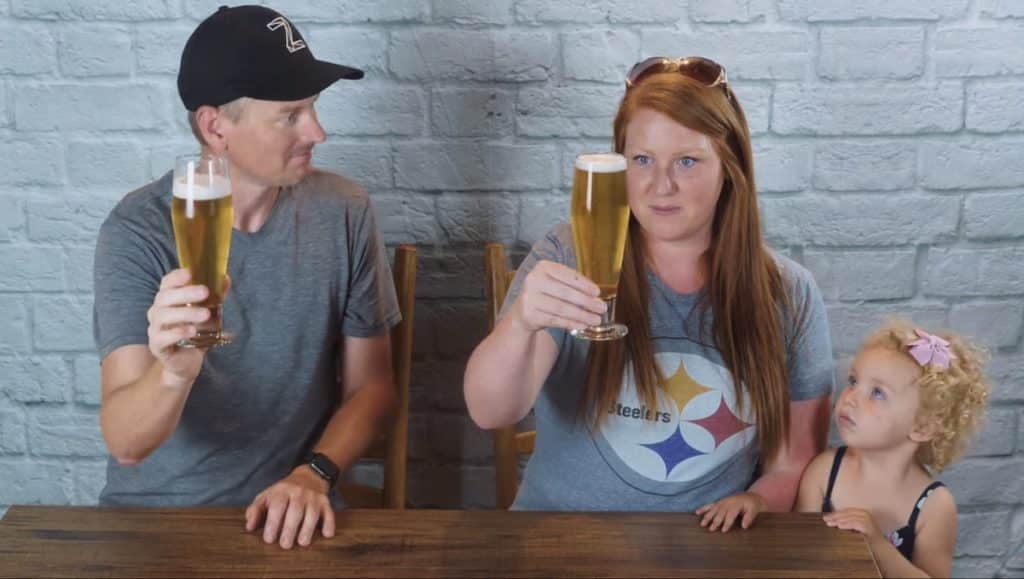 So it tasting time of international Pale lager. We have two participants here, one which will partake, which is Kelly so Kelly first of all, international pale lager, or do you think of the color? It’s a very light straw color. It’s definitely living up to its pale name right? I would say not much going on with the aroma smells a bit like, like beer? Okay. So the most important thing is try the taste. So quite clean tasted, a little sweet. I think.

What do you think it’s definitely light kind of, kind of like a crisp ending to it. I guess a little bit of sweetness, but not, yeah, nothing overpowering. Yeah. Drinkable in the hot weather, I think. Yes. Perfect. For the pool today. Perfect. For the pool. All right. So that is the beer, cheers!