American Wheat Beer is an example of the youthfulness of the American brewing scene. As a brewing ingredient, the history of wheat extends all the way back to the beginning of agriculture. Mostly it has been known to have ties to Germany and Belgium at around 1500.

The anti-German sentiment that hovered over America after World War I and the beginning throws of Prohibition ensured that this style would be stomped into the ground. This style was left for dead during the 1800s.

Then suddenly the popularity of German culture, including its beer styles, would surface again post World War II. This left brewers in America left with the inspiration and desire to replicate what was being enjoyed across the pond.

As America was drawn into World War II on December 7, 1941, just a mere eight years and two days after the repeal of Prohibition. This brought American troops into Germany and continued to stay for another forty years due to the Cold War. With multi-generations of American men based in Germany, it was only natural that the exposure to Germany’s local beers had a resounding effect of these returning G.I.s.

Anchor even paid homage to its German predecessors by describing their Summer Wheat as a beer that may contain yeast and be hazy like a Hefeweizen. Yes, there were hazy beers before hazy beers! The yeast used by Anchor was clean and did not contain the same phenolic spiciness and banana esters of a traditional German Hefeweizen.

Straw yellow to deep gold in color. Long lasting, white head with clarity either being excellent to hazy, depending on whether the beer has been filtered or not, both are acceptable.

Bready, grainy, doughy, or cracker-like are all possible ways to describe the aroma in the low to medium range. Some sweetness is present and acceptable. Esters should be below medium with no banana esters present, instead a neutral character shines through. No clove phenols or hop aroma should be present. Some citrusy, floral, fruity, or spicy qualities may be present due to the hop additions.

Medium-light to medium body with carbonation ranging from the upper end of medium to high. Body can be soft with a rather creamy mouthfeel.

Taste is filled with breadiess, doughiness, or cracker-like qualities, which may extend into the finished beer. Hop bitterness should be higher than a German wheat, but still remain modest. Bitterness can linger into a crisp finish or disappear behind a sweet finish. Hop flavors should be low to moderate and likely be considered spicy, citrusy, floral, or fruity. No banana esters or clove phenols.

Eggs, bacon, sausage – think brunch fixings that are ideal for the start of a lazy weekend. Works well with all sorts of salads. Seafood pairs well with American wheat beers. Cheese route takes us to chevre, cream cheese and ricotta.

Tips for Brewing your own American Wheat Beer

As you may have guessed, wheat will make up a large majority of the grist for this American Wheat Beer. Percentages of wheat malt usually range from as low as 25% to as high as 70%. Usually most commonly the proportions will fall somewhere in the middle at around 30-50%. The bulk of the remaining grist will consist of a quality 2 Row or pale malt. Specialty malts, if used at all, may be a paler caramel malt, cara-wheat, dextrin malt, Munich, and/or honey malt. A small portion of the grain bill should be made up of these specialty grains, usually 10 to 15 percent of the grain bill.

Use of rice hulls can help even the most veteran of brewers while using wheat malt. When using wheat malt, you will notice that the malt does not have a husk. This husk helps to prevent stuck sparges or mashes. So as a way to avoid this dreaded stuck sparge or mash, add rice hulls to your grist. Usually a half pound of rice hulls for a five gallon batch will do the trick. Rice hulls do not impart and color or taste. Rice hulls should be used with any cereal malt such as wheat, rye, and even flaked oats at a high percentage of the grist.

The sky’s the limit when it comes to hopping an American wheat beer. Although the style calls for some more hop forwardness, the upper IBU limit is just barely when American pale ales begin. A good range to fall under would be between 20-30 IBUs, Also, consider the bitterness/gravity ratio (IBU/OG) to be somewhere between 0.3 and 0.8.

The American hops that have been used include Cascade, Amarillo, WIllamette, Liberty, and Mt. Hood. Since American wheat beers have a German lineage, some German hops are always a good choice. These include, Tettnanger, Hallertauer Mittlelfrüh, Perle, and Spalt. Also, an American wheat beer is a good way to explore new hop varieties, such as experimental hops or some of those crazy hops from down under.

Ferment at the mid to high 60°F (20°C) or whatever your yeast manufacturer suggests until your final gravity is reached. This will keep the easters from producing too much during active fermentation. A healthy yeast pitch is important and remember to oxygenate our wort. Be mindful of managing temperature control so as to not have any off-flavors develop over time.

American Wheat Beer By the Numbers

It’s time to brew a wheat beer. And unlike it’s German counterpart, which has esters of banana clove an American wheat beer is bready, grainy, and a little bit hoppy. Let’s brew one! 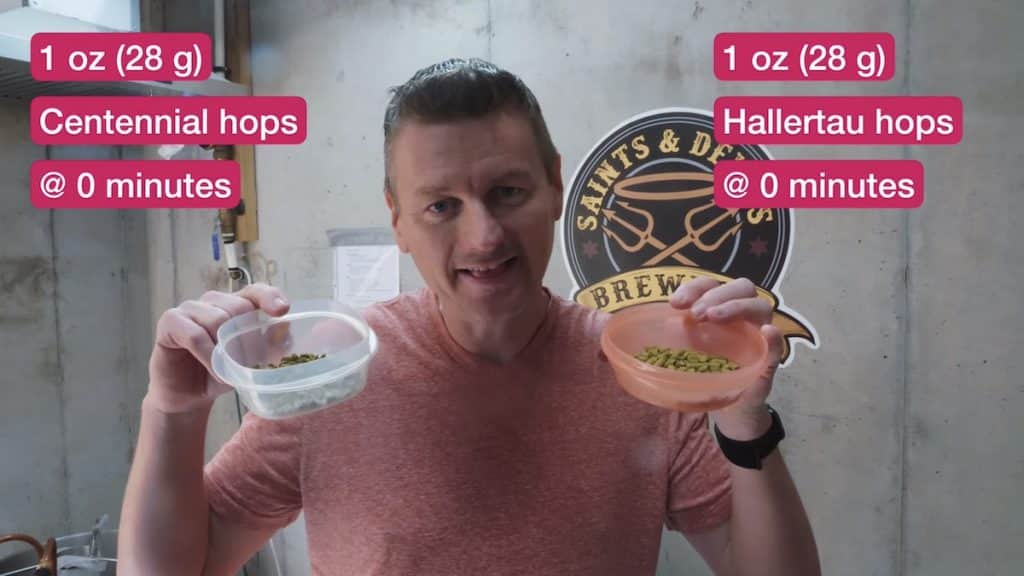 Hi, I’m Martin Keen. And this is my Homebrew Challenge to brew 99 BJCP beer styles, one per week. This is my fourth one. It’s 1D American wheat.

Now the grist for this beer style typically consists of about 50% white wheat malt. And then the other 50% is some kind of barley, typically either 2-row or pilsner malt. I’m going for a very simple mix of six pounds of 2-row and six pounds of American wheat. And because this beer does contain a large amount of wheat, I’m using rice hulls as well.

So let’s talk rice hulls. When you’re brewing with wheat beer, you don’t get the husks when you mill that wheat in the same way that you do with barley. And that can mean that you end up getting a stuck sparge. The way I can tell I have a stuck sparge is when the sight glass starts dropping in the mash tun. So to address that issue, I’m using a liberal amount of rice hulls. These effectively supplement the husks that we’re not getting from the wheat grain. And if I use enough, it really does seem to fit my stuck sparge issues. 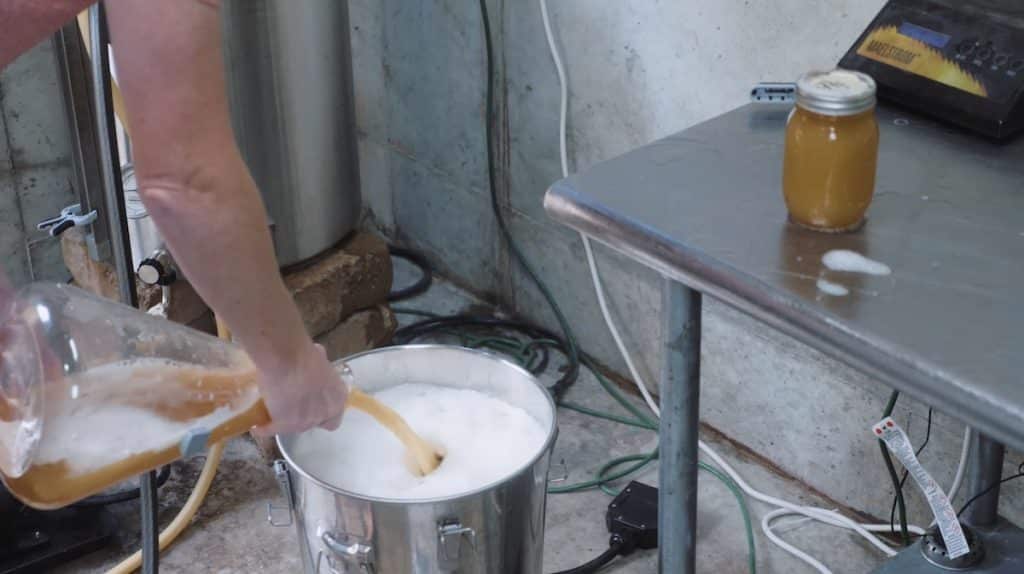 Now let’s talk yeast. Normally I make a starter a couple of days ahead of brew day, cold crash it, and then decant and pour it in. I only got home from a trip yesterday, so I didn’t have time to do that. So I just made a yeast starter last night and I am going to pitch directly from that starter into the wort, stealing a bit of that starter so I some use to harvest for next time. The yeast I’m using is WLP001. So it’s California Ale Yeast. I’m going with that because we want this really clean profile from the yeast. We don’t want any esters giving that sort of banana or clove flavor.

So bit of a surprise on this beer here in its appearance. Uh, this beer ended up being repurposed for a first birthday party for Zoe and we wanted a pink beer.
So what we did is I took four pounds of raspberries. I boiled a bag, put the raspberries into the bag. Um, the rasberries were frozen, so they were already sanitized, dropped them into the keg. And in three days, took a tasting and immediately decided, no more raspberries.

We needed to pull it out. Like it got very raspberry very quick. 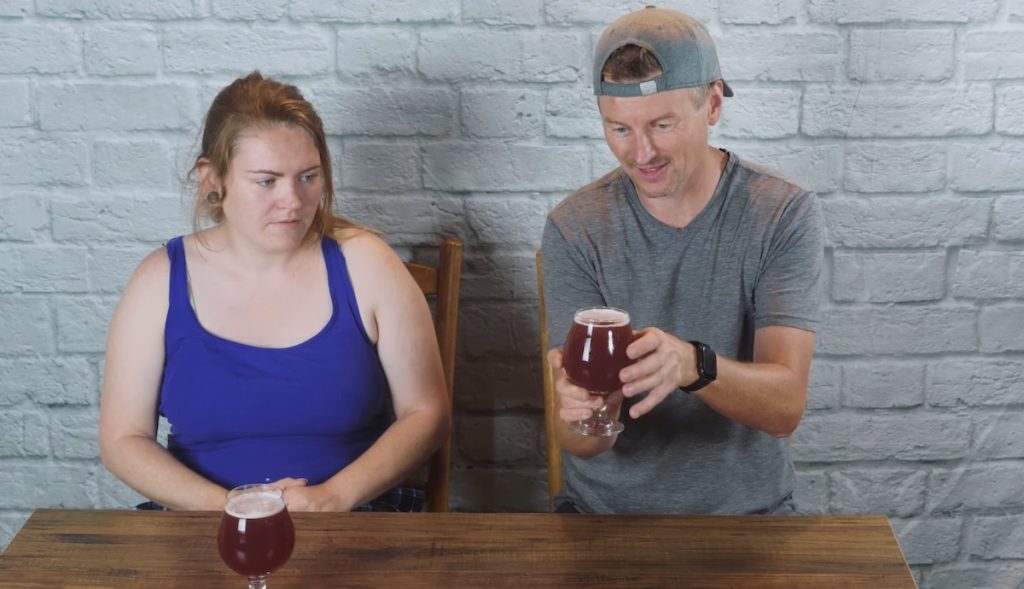 Uh, so we have already tasted this beer a few days ago, but we’ve given it a bit of time to settle and, and to carbonate. Yeah. Cause it was, it was flat. So, uh, first of all, appearance, uh, this definitely doesn’t look like your average wheat beer. Now it’s got some color to it. It looks exactly like a raspberry color.

Are you done with your appearance? Let’s pass through the dad over there. Okay. Baby gone. Um, right. So yeah. What do you think about the appearance? Well, the appearance, like you said, it’s meant to be a wit beer?. There is that yes. It’s an American wheat American wheat. So yeah, first period, I would never think that it would be an American bleed. It’s not like your average I can believe in or something. No, I’m just very intrigued when I saw it with how deep of a red color it is. I thought we, I thought it was gonna be a lot longer to get its color.

Alright. So aroma, Raspberry, I think is the definitive on that one. Yeah.

Let’s try the taste. It doesn’t taste like raspberries at all. Just kidding taste that tastes really good. That tastes a lot better than when we tried it for you to have the raspberries out. It doesn’t taste like a regular wheat beer would it had, does have a kind of, like I said, that ghosts or a sour type type taste to it, but it’s not overpowering. Like I could drink a full pint in this.

So just to note on this beer, by the way, because the fruit went in post fermentation, there is a ton of sugar in this keg. So if this beer was not kept cold, it could re-ferment. And I mean, in a keg, it’s just going to get a bit busier. But if you were bottling this beer, it could be somewhat of a disaster. So yeah. Keep that in mind. All right. Well, I think this has turned out to be, uh, an improvisation that was quite successful and happy birthday to Zoe!