It’s no secret that the Germans love their beer. If you were to walk into a local establishment in Dusseldorf, Germany and say “give me a beer,” you would indeed receive an Altbier.The Germans have been consuming Altbiers for approximately 3,000 years.

What’s in a Name?

Altbier translated from German means, “old beer.” The style evolved over the years. The Germans tried to distinguish this beer from the ever so popular lager beer that was popular throughout the region. Some say that Altbier’s name came to be because of this style being an alternative to the fermentation process.

Its name was chosen after its fermentation style – top fermentation yeast – which is an old process of brewing beer, as opposed to bottom-fermentation, which is a newer process. In 16th century Bavaria, this beer came into existence and gained popularity all across Europe for the next couple centuries.

Just as the city of Cologne has become the brewing grounds for Kölsch, the town of Dusseldorf has become synonymous with Altbier. The production of Altbier and its popularity was purely driven by geographic location. Dusseldorf is never too warm, even in the summer.

Also, it rarely has long periods of freezing temperatures in the winter. These weather conditions are ideal for brewing cold-conditioned ales such as Altbier throughout the year.

The color for an Altbier range from light copper to dark auburn. However, the color should never go as dark as brown. Crystal clear clarity and an off-white, creamy, thick head with decent retention.

The German base malt really comes out in the aroma. Toastiness, baked bread and crust offer clean, complex, and grainy characteristics. Low to medium low fruity can be present. Hop aroma comes through as spicy, floral, herbal, or peppery

Medium body with medium to medium high carbonation. Smooth on the palate with low astringency

The malt is clean and crisp and has nice complexity even with the beer’s high attenuation. Hop flavor is moderate to low with peppery, floral spiciness. Fruity esters may be present with the finished beer. The finish of this beer can be dry, with nuttiness, along with hop and malt complexity.

Tips for Brewing your own Altbier

Maltiness is what you want to achieve with your Altbier recipe. A good Munich malt should be the first malt you look for when deciding on an Altbier recipe. If you indeed use only Munich malt, you can look for 5 to 8 Lovibond. If you use a higher Lovibond, such as 10 to 20L, you can just mix with a lighter Munich malt to the desired color. Some German brewers have already used German Pilsner malt and mixed it with their Munich malt. Ratios of dark Munich/German Pils or dark Munich/light Munich ranges from 10/70 to 50/50. It should be noted that German pils will be more fermentable, which will lend to a crisper and somewhat drier beer in the finish.

Vienna malt can actually make an appearance in this recipe, up to 25% and a small amount of Cara-malt up to 5% for more complexity. Black malt or even Chocolate malt can be considered also, however in extremely restrained quantities, less than 2%.

An authentic Altbier will contain an assertive bitterness ranging from 25 to 50 IBUs. Even with this bitterness, there will be a small amount of hop flavor or aroma. Bittering additions should be at the beginning of the 90 to 120 minute boil. Spalt, Hallertaure, Saaz, Tettnanger, Perle, Mount Hood, or Northern Brewer can all work well here.

If flavor or aroma hops are used, like many German brewers include in their own recipes, keep with a single addition, keep it restrained, and of course keep it noble. Words of the German brewer to live by.

It is said that this style has the most limiting beer styles when deciding on a yeast strain. You are looking for an ale yeast that ferments vigorously enough at temps that would slow most ale yeast. White Labs makes a Dusseldorf yeast WLP036 and Wyeast makes a German Ale strain 1007. Imperial Yeast produces Kaiser – GO2 or even Dieter – GO3 that can be an option. If you are considering a dry yeast Safale – 097 can be an option.

After fermenting your beer, lager for 4-8 weeks at around 40°F. Lagering will help you to mellow out the hops and assist in beer clarity. If fermenting at a higher temperature, lagering will help reduce the fruity esters that will be produced by the yeast.

Since we are talking about a German beer, I feel like it is necessary to mention an authentic mash that would include a decoction mash. With today’s highly modified malts, some will argue that a decoction mash is unnecessary and would opt for a single infusion mash. I respect the old school way of including decoction mashes because that is the way you have always done it. Something about honoring a tradition sits well with me. I just don’t practice that sort of brewing method. 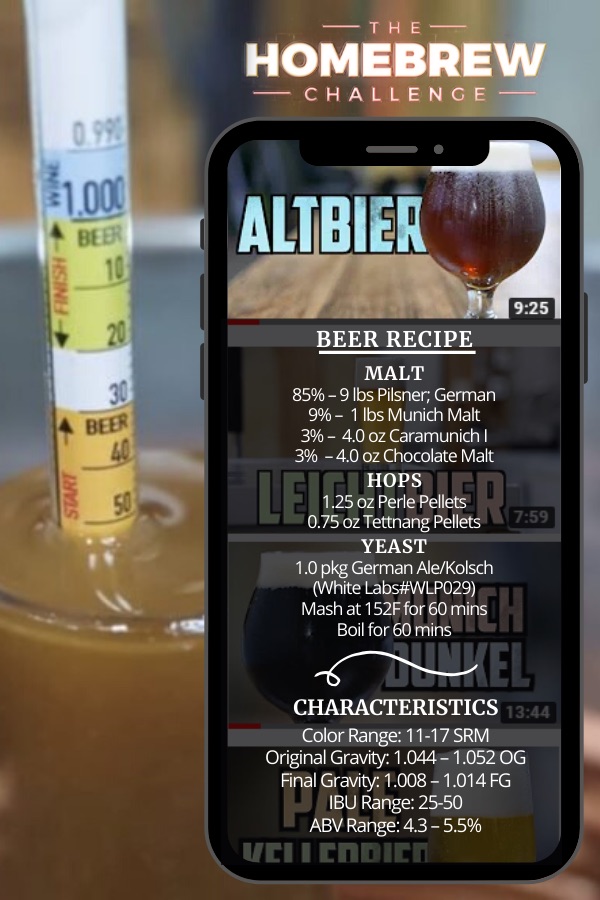 Having brewed so many German beers recently, I’m now beginning to pick up a bit of the language. Like, “life” means “light.” Helis means bright and today’s beer, Altbier.

I’ll tell you why it’s called that when we brew one up today and we’re also going to revisit a better way to get beer into kegs.

Hi, I’m Martin Keen and I’m taking the Homebrew challenge to brew 99 beer styles. Today’s beer is Altbier. Now I’m told if you go to Dusseldorf, Germany and order a beer, you’re most likely to get an altbier. Now also, as I said, it means old and that refers to the yeast. The fact that this uses the older style yeast of top fermenting least. Now an Altbier is kind of an interesting style to brew because it has a bit of everything. 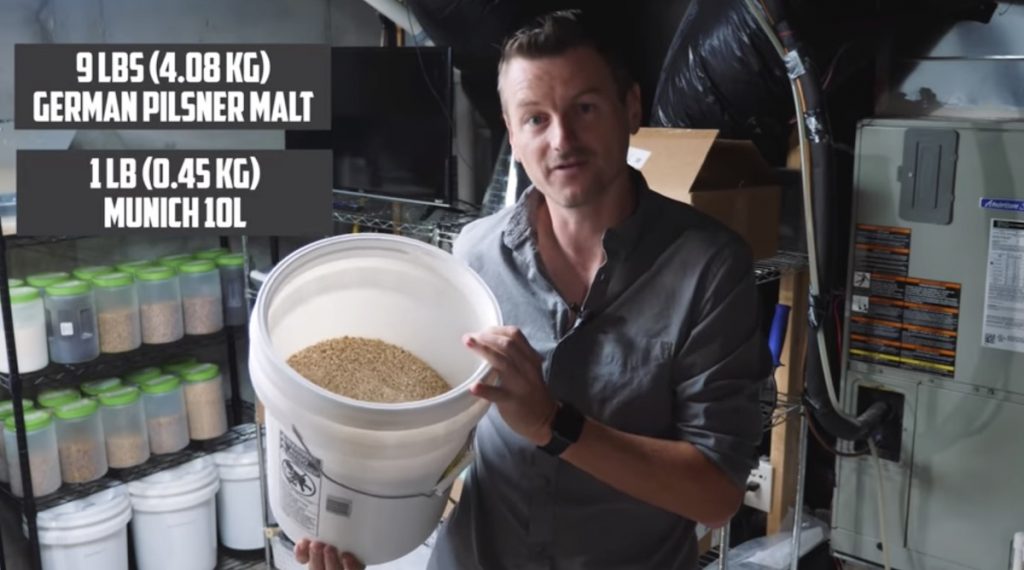 It’s made with light malts and also darker crystal malts. It’s brewed as an ale but it has the clean tastes of a lager, so this is going to be an interesting one to brew up. Now I have here the grist for that I’m using. This consists of nine pounds of German pilsner malt and then one pound of Munich 10, that makes up the base malts. Then for the specialty malts, I have four ounces each of CaraMunich I and then chocolate malt for the color. 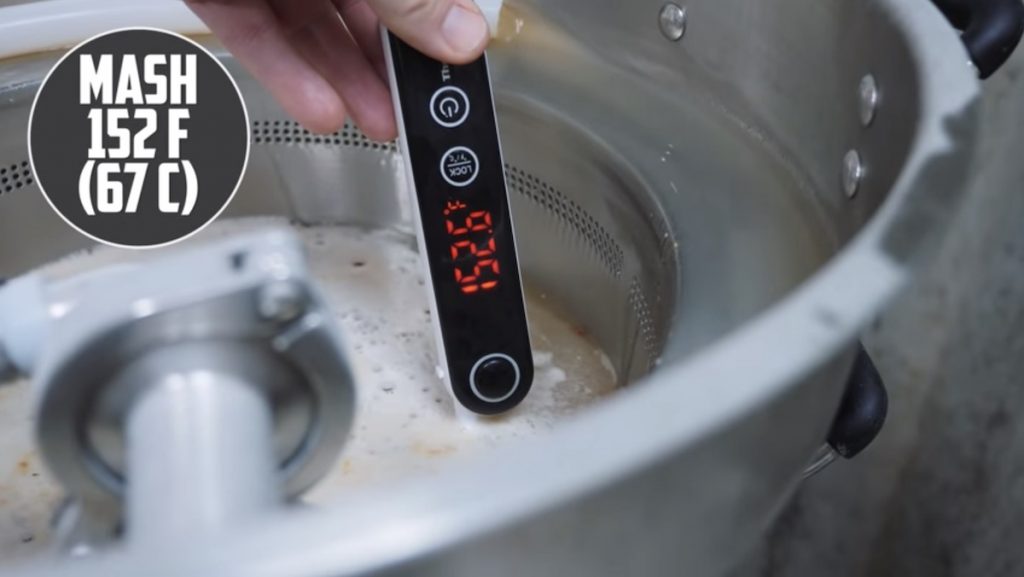 So today’s brew day started at 5:30 AM we brew where we can, right? Fortunately I’ve got a poor of nitro cold brew coffee here to wake me up. Cue the gratuitous nitro cascading effect montage. So smooth….

Now one of my favorite things about posting videos is I’ve brewed each one of these beers is the feedback that I’ve got in the comments section. I’ve learned all sorts of stuff.

Okay. Not everyone’s a winner, but I have learned a whole lot of hints and tips in these comments. Take for example, my video about packaging in kegs. I was looking at a way to do that better to reduce cold-side oxidation.

If you’re doing pressurized transfers, I’d love to hear how you’re doing it. Well, I’ve got a ton of good feedback on that. Let’s try one of those ideas now. 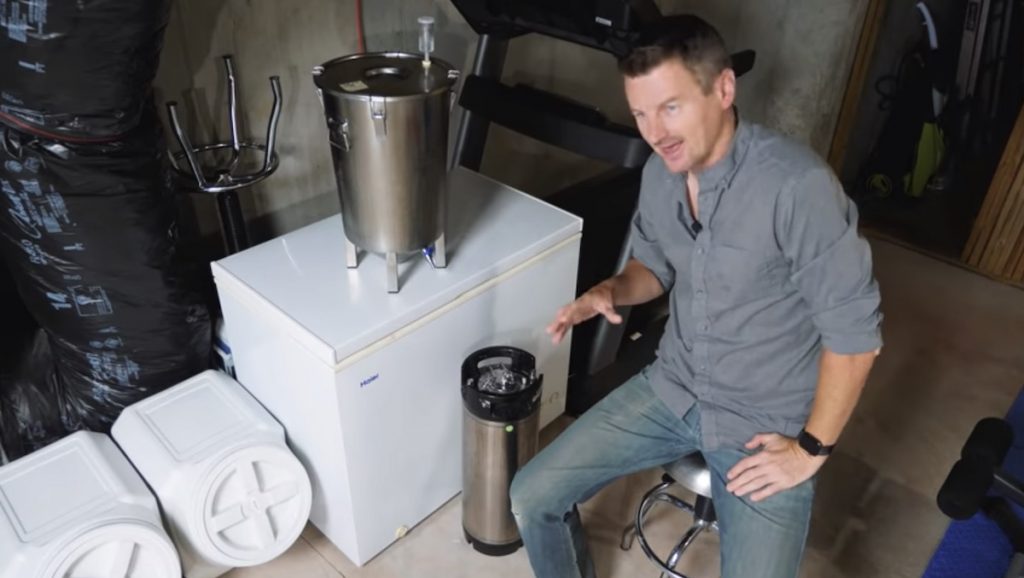 So basically the issue here is I’ve got this fermenter and it’s full of beer and CO2, and I’m racking that beer into this keg and this keg is filled with nothing but air. And what I was looking for is a solution that would eliminate the air and just make sure that when I’m transferring from this vessel to this one, the only thing that’s transferring is beer and CO2. Now here are the tools I’m going to use to do this.

So first of all, I’m going to fill a keg right to the top with water and starsan, and then I’m going to pump out the water from that keg into a second keg using CO2. So to do that, I have this bit of tubing here. I’m going to put a liquid out connector onto each end.

And this is how I’m going to get the water from one cake to the other. So I’ve set my CO2 regulator to just a couple of PSI of pressure and that’s connected to my keg, that’s full of starsan. And then coming from the outpost here, we have this connected to a second keg and water is now transferring through here.

And then as I pumped the water in the air that’s originally in this keg needs to come out. So I have a gas connector here on this gas post just to let the air out. So this is now filling with CO2 and draining the water and star san. And this is filling with the water from that keg.

Okay, I guess that’s done then. Okay, so what that’s left me with is a keg full of CO2. Now as I start pumping beer into that keg, the CO2 that’s in there has got to go somewhere and I’m going to send him back into the fermentor.

So now beer is flowing out of the brew bucket through this tube here into the keg. As the beer enters the keg, CO2 is displaced, the CO2 is coming out of this gas post back into the brew bucket. We’ve got a closed system here. Now I have no real way of checking if this has worked or not other than just to sort of check on the taste and the shelf life of the beer over time. But it makes sense to me that this is going to reduce the amount of oxygen that’s getting into my keg.

And thank you so much to everybody who left a comment along those lines. This is the method I’m going to use going forward now. Back to the Altbier… 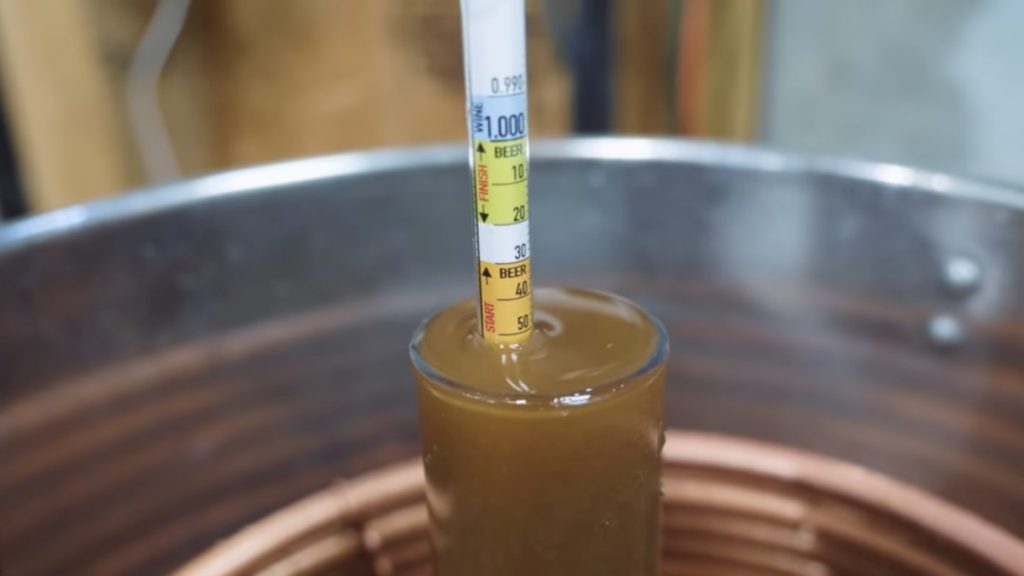 The beers come out with an original gravity of 10 52 which is what I’m looking for. We’re going to use ale yeast, but kind of ferment closer to lager temperatures. So I have here WLPO29 that’s German ale yeast, and I’m going to ferment it at 60 Fahrenheit. All right, that’s it. 8:45 time for breakfast.

It’s tasting time. I’m here with Brian. Brian, welcome. Thank you. So the quick notes about this bear, this came out as a 5.6% beer. The final gravity was 10 09. 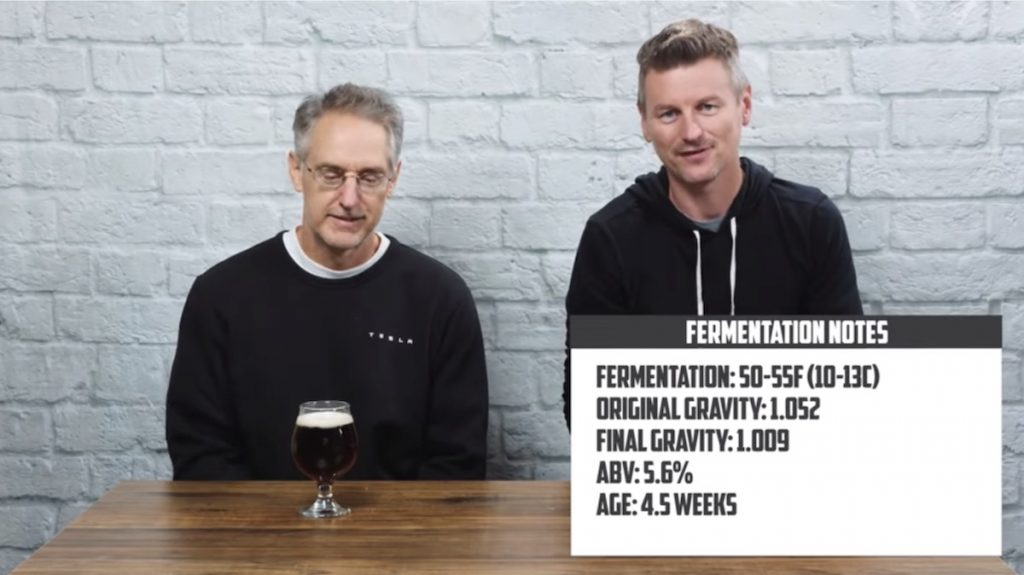 Now Brian, you’re a homebrewer as well and you mentioned that you’ve proved this style before. Yes, it’s not a real hoppy beer. I think it has a little bit of sweetness to it. Nice malti body. See if, if this beer matches all of those characteristics.

Okay. So, yeah. So first of all, let’s take a look at the color. What do you think about the, the color for this one? That’s a nice, um, kind of, uh, Amber reddish color. Yes. Okay.

Uh, how about the aroma? Um, malti little bit of sweetness. Yeah. Hopefully that’s on point. So that’s, that’s give it a taste and see if this matches your malti and sweet characteristics for this, this style of beer.

Cheers. That’s very good. Similar to the, the aroma malti, just a little bit of sweetness to it. So you’ve heard a couple of these, this is a style you enjoy? Maybe one or two. This was one that I, I think I had at a friend’s house and I liked it, so I thought, Oh, I’ll try brewing that. All right, well I’m glad you enjoyed the beer and yeah. Cheers. Yep. Thanks for inviting me. 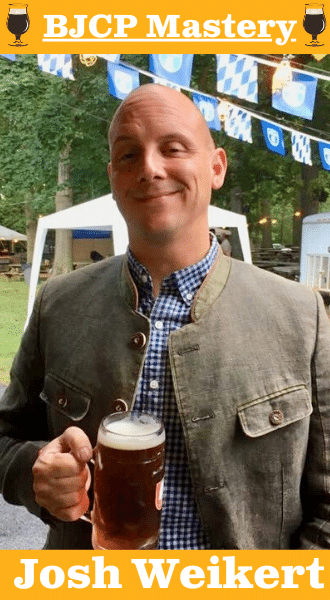