American Lager as a beer style has gained a truly undeserved reputation. In the mid-1800s, American’s enjoyment of beer centered around higher abv, dark beers, much like parts of Europe. Americans did not have many options because barley did not fare well as a crop in the colonies and importing from Europe would be too costly.

Importing English beers was also cost prohibitive. Americans were left ingredients that they could readily find around them such as corn, wheat, squash – including pumpkins, molasses, and peas.

Beer went through a downward cycle in the 1600s as consumers were more interested in liquor, hard cider, and even non alcoholic drinks. The Temperance Movement (a social movement against the consumption of alcoholic beverages) took hold in the early 1800s. However, brewers found this movement being an ally as many focused on harder alcohol and saw beer as a lesser evil.

As German migrants headed into America, they sought political and religious freedoms. Luckily, they also brought their vast knowledge of brewing beer. German brewers were interested in recreating the crisp Bavarian lagers reminiscent of their homeland. American barley was becoming available, it was not the same quality as the German brewers were accustomed to back home. However, using this domestic barley was still cheaper than an alternative. German brewers began embracing adding adjuncts, such as rice and corn, to their kettles.

These American lagers were a huge hit with the working class. Often workers would include a pint or two while eating their lunch in a saloon. Many considered light colored beers lower in alcohol as compared to their dark beer counterpart. This won over those still pushing forward with the Temperance movement. As a way to originate the genesis of the adjunct laden lager, the American consumer was largely the culprit.

As hard liquor consumption dropped some 80%, the Temperance movement sought its sites in the beer industry. As hard liquor declined, beer filled the game. From 1900 to 1913, a mere thirteen years, beer production increased by over a billion gallons. The 18th Amendment was ultimately passed in 1920. More than 1,500 breweries had to close their doors.

Since a large number of breweries were not making money from their beer, owners needed to become imaginative with how they would weather the storm. Coors started a successful ceramics line, which is still active today. Yuengling began an ice cream and dairy plant. You can still find Yuengling ice cream today. Anheuser-Busch began producing soft drinks, ice cream, and nonalcoholic beer. Finally, Pabst made cheese. Much like today with breweries trying to survive amidst the CoVid-19 pandemic. Many breweries needed to reconfigure their sales and some even began producing hand sanitizer. It should be noted the breweries, who have distilling capabilities, were the one producing the hand sanitizer.

Prohibition was repealed in 1933. It became very obvious that the American palate needed some work. Thirteen years proved to be too long for beer drinkers to remember how beer could or should taste. Breweries decided to brew based on their customer’s recollections of the beer they tasted over a decade ago. Major events such as the Great Depression and World War II both caused challenges to recreate this American lager. Over time the beer became weaker and weaker in taste. It is still brewed with a large amount of rice or corn adjuncts.

Straw yellow to pale golden yellow in color. Head will be extremely white and foamy but will not have good retention.

Aroma is rather subtle. If present at all, it will lean more toward grainy with slight sweetness and possibly some corn quality. If hops are present at all, they tend to be lightly floral or spicy. Clean fermentation, but may have some traces of green apple and low DMS.

Quite neutral in flavor, tending to be more grainy. With a low to medium hop presence, the taste tends to side more with the malt and a sweet corn-like presence.

Tips for Brewing your own American Lager

The grain bill for an American lager is pretty simple and straightforward. The base malt is usually 2-row or 6-row or a blend of the two. This will make up around 60 percent of your grain bill. Corn or rice adjuncts should make up the remaining 40% of the grain bill.

The IBU range is fairly light with an American lager. Keep the IBU range at around 8-18. This can be achieved by a bittering hops at 60 minutes and that’s it. There is really no need for aroma or flavoring hops with this style of beer. The hop variety for this style includes: Cascade, Chinook, Magnum, Cluster, Liberty, or Crystal.

Fermentation temperatures should be in the neighborhood of 50°F (10°C).You can also lager it at 32°F(0°C) for four weeks. This is a beer style that should be consumed fairly quickly, so drink fresh.

American Lager By the Numbers

Did you learn anything email optin code:

Simple crisp and clean are the characteristics of a standard American lager, but we’re going to brew one with just a bit of a twist. Hi, I’m Martin Keen, and I’m taking the Homebrew challenge to brew 99 different beer styles, one per week. This is based on number two American lager. Now the ingredients for this one are pretty straightforward. I am using nine pounds of two row malt and mixing that with one pound of the vienna malt. And cause, we want a little bit of sort of little tiny bit of corniness to the beer, flaked corn going in as well.

I need to put this into the mash tun, start the mash. And while that’s going on, let’s talk a little bit about this style of American lager. 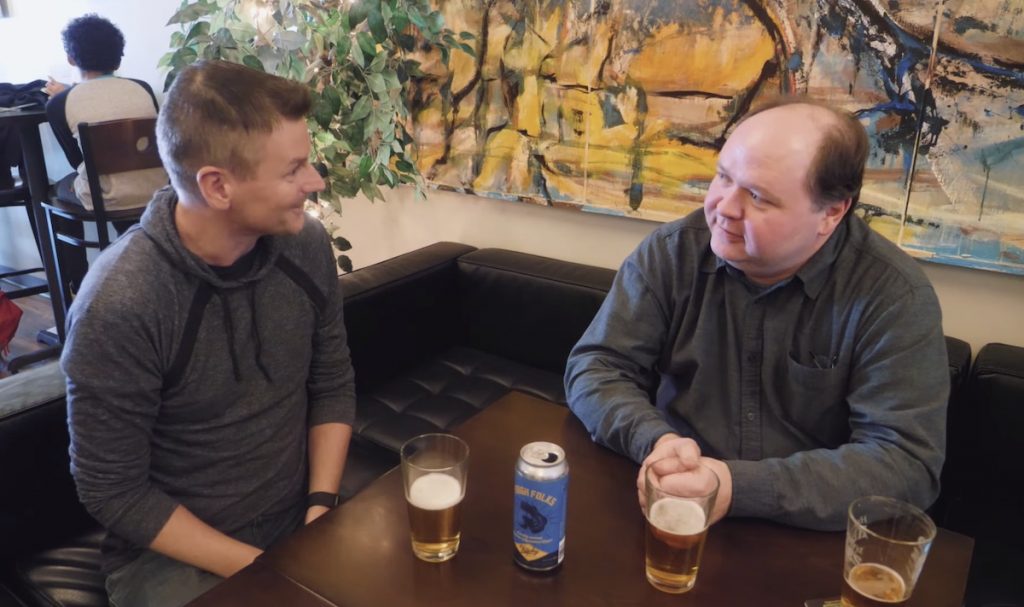 Hi. We were at the mod in Pittsburgh and I’m here with Thomas Vincent Thomas. Welcome. Thank you. Thanks so much for doing this now. Um, now Thomas is a head-brewer and uh, also is a educator. He has, uh, taught a class at wake tech for a number of years on brewing. And in fact, I’m a graduate of his class, and he survived. I survived. It was a great toss. We got to go to breweries all over the place. We’ve brewed our own beer. Underground. ESP was our beer. Great.

So I wanted to ask you about this beer style, which is just American lager. What you think is sort of the main characteristics of that sort of, there’s a “whole lot of nothing”, and, and it’s very balanced about that, that they intentionally stays away from any strong character strong flavor, but the interesting thing is about it.

But when you think about it, the light lager, which is the Coors light, the Bud light, whatever you have those when you have those, the efforvessence overwhelms the other characteristics of the beer, but with this in comparison to you do actually oftentimes get the hop character coming out, or you get a little more graininess to it than you necessarily would out of that light lager in comparison. So there is flavor going on, but it’s very subtle.

So for the commercial example, I got Tough Folks from true fever and company. That’s a little local brewing company, so I’m going to try sure.

I do get a little bit of, uh, corn kind of in the finished in the note of that. I’m not really getting much hop character myself. I can definitely smell the corn. I think that’s an independent part of style. It’s definitely would not consider too much of an off flavors like an IPA or something. I think that accomplishes the goal, meets the style. Yes, it meets the style. It’s not really hoppy in any sort of bitterness in any element. And there is just that little bit of sweetness in there, Thomas. Thank you. Cheers.

For each one of these brews, I always consult my trustee BJCP guidelines and get to learn a little bit about the beer styles. And it describes here how the American lager is heavily influenced from German immigrants and pilsner lager, and also how it sort of morphed into what it is today through the prohibition.

But it also sort of describes the beer in a little bit of a snooty way. Let, let me read this to you. It says it “became the dominant beer style for many decades, spawning many international rivals who would develop similarly bland products for mass market supported by heavy advetising.”

I’m going to see if we can brew an American lager that really isn’t bland, but actually it’s just a little bit of pleasant, sweetness and corny characteristics to it. This beer, I’m mashing it at 152 Fahrenheit. I tried to get to pre boil gravity of 1.034 . Hops for this one, just bittering hops, actually 1.5 ounces of Halertauer Pellets, and that’s to get to an IBU of about 16.

Let’s talk yeast because that’s where the little twist is. Now, traditionally, and this sort of beer, you would use something like white labs, WLP840 which I have harvested a little bit of that from my last brew was American light lager. 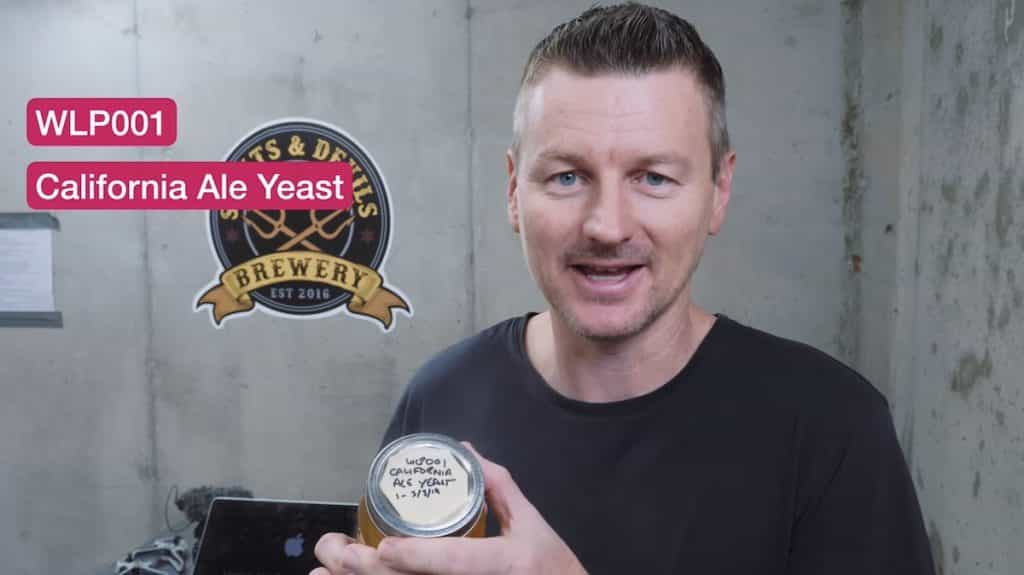 However, I’m not going to use that. I’m going to use WLP001. That is California ale yeast. Yes that’s all right. Ale yeast. Now, before anybody freaks out, let me explain firstly, technically the BJCP style guidelines, don’t actually say you have to use a lager yeast, even though it’s called a lager. Now I take the point, it does say lager in the title, but there you go.

Secondly, I’ve read in a lot of places that actually to get that clean and crisp taste that you want out of this beer, it is actually sometimes preferable to use a very clean finishing WLP001.

So I’ve made a starter, hold on. Here’s my starter. So this is the WLP001. I’m going to pitch this and ferment initially at 68 Fahrenheit. Then when fermentation is kind of nearly done, I’ll Bump it up to 72. Alright. 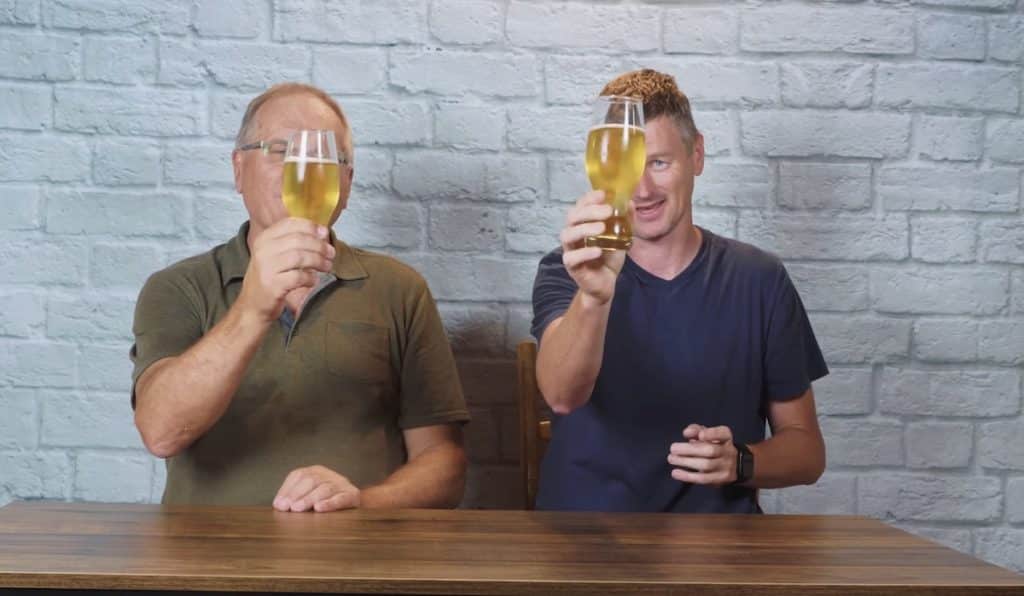 I’m here with my dad to try American lager. Now dad I know this is not your favorite beer style, but I’ve had my fair share tasteless assuie beer. So I can probably give this a, you know, a reasonable review.

All right. We’ll see if we can beat tasteless assuie beers,.. There’s the first of all color, um, pretty light straw color, right?

Yelloe, which is not really when I think of this beer, but it’s not a good start.

Very yellow. That’s not good. It’s not dark enough. Okay. All right. And then aroma. What do you think about aroma?

Reasonably nice, but not aroma I don’t think.

More flavor than those other Aussie beers. And I think that’s a nice, refreshing drink on a hot day. We’ve just come back from a walk and the hot and humid evening. And that’s a nice refreshing drink at the end of the day. I wouldn’t want too many, one would be enough, but one is very nice.

It’s yeah. Um, so this is very much towards the Budweiser. It’s kind of known as a lawn mower beer. The idea being that you cut the grass and then come in and your thirsty, And yeah, I could see that. And that would go down in one or two sips to get that down. I think after mowing, especially mowing your lawn.

Well, cheers to a Lawn mower beer, and to beating Australia. Cheers!