As many beer aficionados already know, the whole Oktoberfest celebrations all started with the marriage between Prince Ludwig of Bavaria and Princess Therese of Saxony Hildburghausen on October 12, 1810. After the great success of that marriage party, these festivities became an annual tradition.

The first years of this festival probably saw a beer closely resembling a Munich Dunkel. Since at this time much of Europe was all things pale lagers, the head brewer at Franziskaner, Gabriel Sedimayr, in 1872 decided to take advantage of these changing times. Sedimayr became friends with a Viennese brewer, Anton Dreher, who would help to produce the Munich Märzen. Sedimayr taught Dreher the details about lagering. He brewed an amber lager, which was based on a Viennese recipe.

It was called Ur Märzen, or “original Märzen.” Like always, other breweries learned of this and began to replicate it. This is how we know Märzen as today.

500 years ago, a brewing season had been set. Bavarian brewers did not have refrigeration. They needed to utilize the caves that existed. Brewing through winter and early spring, allowed for brewers to take advantage of cool temperatures while the potential of spoilage was kept to a minimum.

The last brew of the year would be in early spring, usually in March. They would craft a higher alcohol and highly hopped beer to act as a preservative for this beer. These were then stored in the caves and lagered during the summer months. Gradually, this beer was enjoyed during the hot summer months. Mostly, it was saved for mid fall and served in casks. This was certainly a high demand beer at the time.

The color of this beer ranges from an amber orange to a deep reddish copper. It should not be any shade of gold. Excellent clarity due to the long lagering process. Nice off white head with a good retention.

A clean and deep malty richness will be most of the aroma. German malt has a slight toasted, bready quality, with light bread crust aroma as well. There should be no caramel, biscuit, or roasted malt aromas. Clean lager characteristics with no hop aroma.

The flavor should be the same as the aroma. No caramel, biscuit, or roasted flavors. Complex bready and toasty malt character really carries the flavor in this beer. Hops should be low or none at all. Any hop character should be of German noble variety, showing floral, spicy, and herbal characteristics.

Alcohol strength should be hidden with a slight warmth. This beer should be fully attenuated with no cloying or sweetness. Medium body with a creamy texture can create a full mouthfeel.

Brewing your Own Oktoberfest/Märzen Beer

Usually an Oktoberfest/Märzen is made with a combination of Munich, 2-Row or Pilsner, and Vienna malts. Traditionally, 50% Munich malt is used and Pilsner or 2-Row makes the rest of the grain bill. 10 to 15% of Munich malt can be substituted with Vienna malt.

A small amount of Crystal malt at 5-10% may be used. However, some dark Munich and/or Caravienne can be included to add some color, but less caramel presence. Up to 5% of Cara-pils malt can be added for body and head retention.

Hops are used to make sure the malty sweetness does not stand alone. A balance must be struck to keep the malt not too sweet, but also not to have an overly hoppy beer. It should be noted that according to the BJCP guidelines, there is no hop aroma, low hop flavor, and moderate bittering. Low alpha acid noble hops should be chosen. Hallertauer, Saaz, and Tettnanger are often used. Liberty and Mt. Hood can also work well for this style.

The water that you use for an Oktoberfest/Märzen should be soft. If your water is usually too hard, consider purchasing Reverse Osmosis(RO) water from your local store.

Originally a decoction mash was used for this style. If you do not have the knowledge or equipment to conduct a decoction mash, you are in luck. With today’s well modified grains, this decoction mash is unnecessary. However, if you feel the need to keep with traditions, decoction away.

A traditional Oktoberfest/Märzen is lagered for 6 long months at close to freezing temperatures. This process takes a lot of patience. Moreover, it also takes a dedicated fridge with temperature control to properly lager this beer. A good Oktoberfest/Märzen can be possible with a 5-8 week lager time. At least with this way, your fermentation chamber will only be occupied for up to two months only. The patience you show with this beer will be paid ten fold once you are able to enjoy your very own Oktoberfest/Märzen beer. 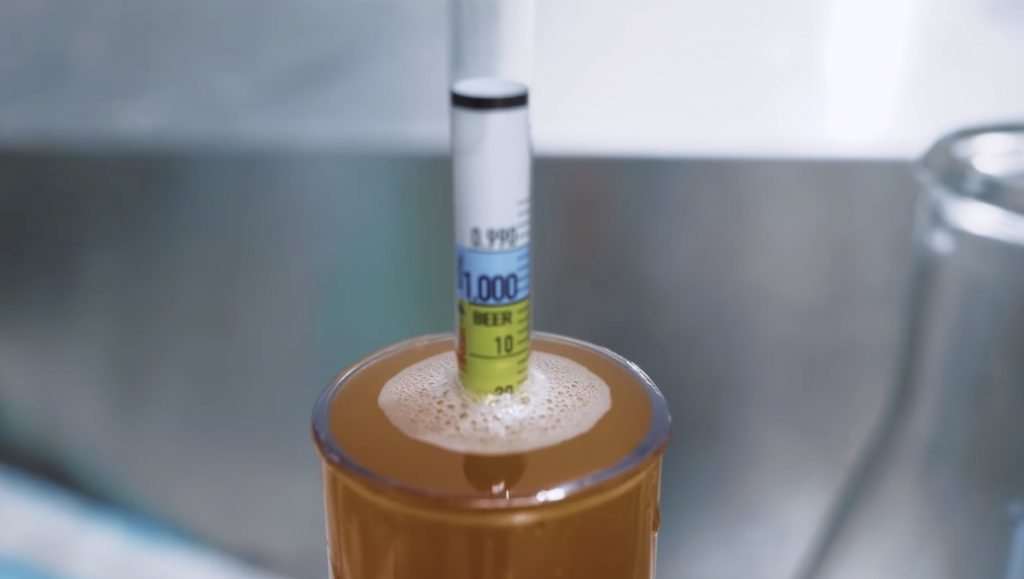 Today on the Homebrew Challenge , I’m going to brew a Märzen Oktoberfest beer and I’m going to attempt to awaken the dead.

So a few weeks back I brewed a Festbier, which is the most commonly served beer at your typical German beer festival like Oktoberfest. But Märzen is probably the best known beer, um, from that festival. So that’s what I’m going to brew today.

So let’s take a look at the recipe for the base malts. I have a mixture of Vienna and Munich malts. So I have seven pounds of the Vienna malt and three pounds of Munich malt. Now for the remaining grist, I have eight ounces each of the following. I’ve got caramel 60. Carapils, aromatic malt and white wheat malt.

That should give me an OG of 1.059, which will mean a 5.5% beer. And I’m mashing it at 152 Fahrenheit for 60 minutes. I say 60 minutes. Actually, I’ve just got back from running an errand, having started the mash earlier.

That thing has been a mashing for 90 minutes, but it’s all good. 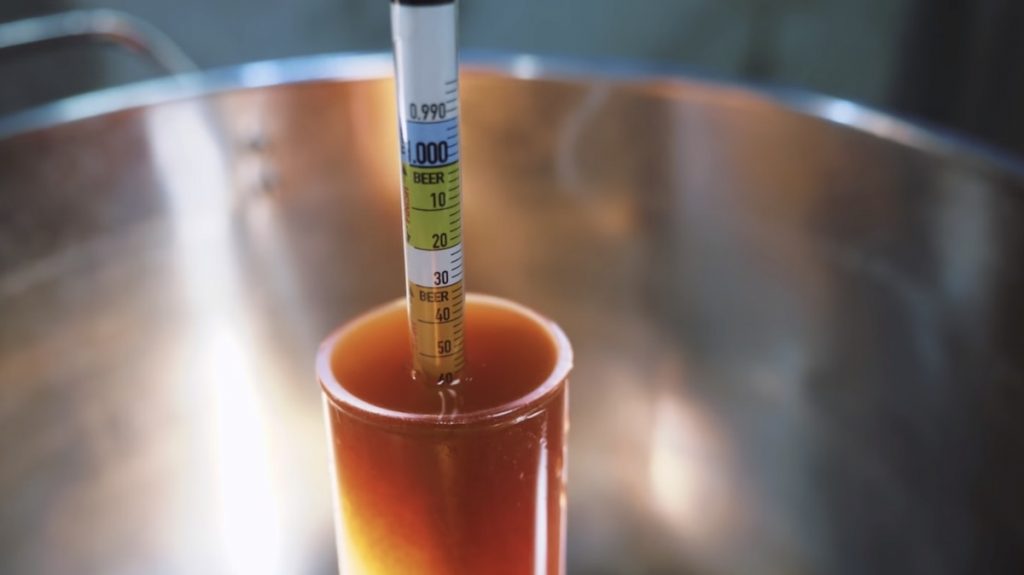 Now let’s talk about the, uh, the back from the dead part of this recipe. And to do that, we need to go back in time just a little bit.

So it’s five days before brewday and I found in my fridge a packet of Oktoberfest, Märzen lager yeast from white labs. Perfect. Just what I need, except that this is over two years old. Now, according to the yeast starter calculators online, there are no viable yeast cells left in this vile. Well, we’ll see about that.

So I’m going to try stepping up a starter to see if I can bring this guy back to life. I’m starting with a 600 milliliter starter. Now this starter wort is actually quite weak. Normally I use about 10 40. Um, for my starters, uh, this has a of 10 20. So giving the yeast a bit less stress to consume this, that is a, there is a new live yeast still in here.

Let’s see. What’s a state of this? 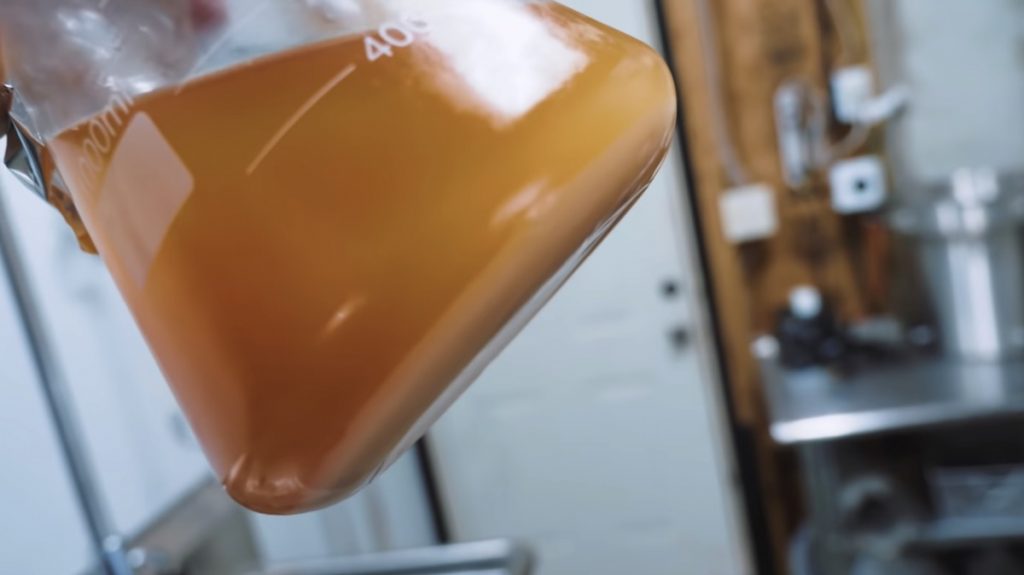 Well, it looks like yeast. Let’s pour it in. Okay.

So I let that starter run for about 36 hours. And when I looked today I thought there was some activity going on. The wort looked a little bit milkier, which is normally the sign that there’s some yeast activity. So I took it off the stir plate and put it in my fridge for a couple of hours and sure enough there at the bottom of my erlenmeyer flask was a little cake of yeast.

This thing is actually working. Now I had planned to do two more step-ups, so I planned to do a one liter starter and then stepped up to it, a two liter starter. But seeing how much yeast there was, I decided that’s just go straight for it. 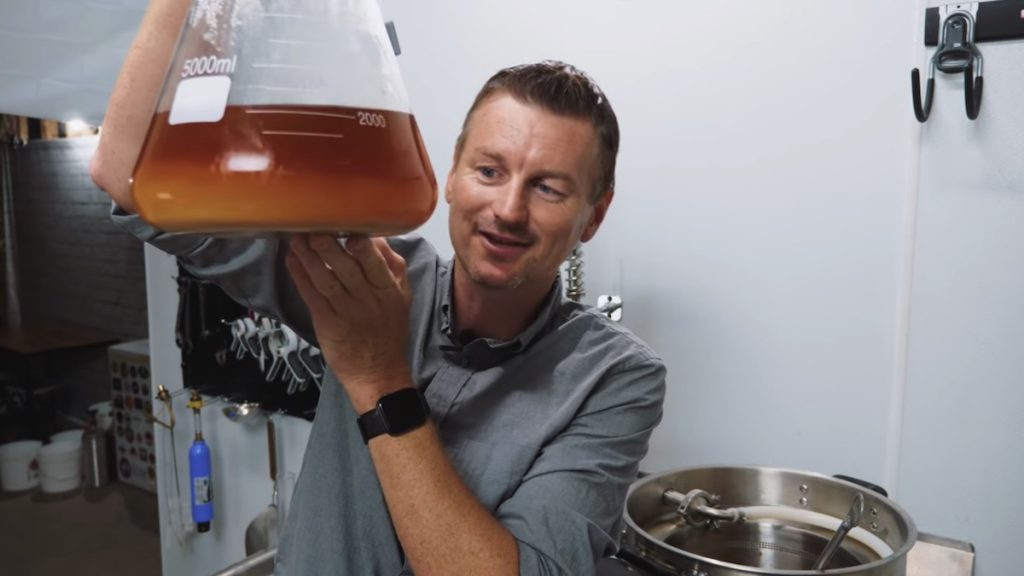 So I went straight to two liters and this was a regular strength starter, 10 40 and I left that on the stir plate for another 36 hours. I removed that, put it in the fridge overnight. And now here is my two liter yeast starter with a nice yeast cake on the bottom.

So this yeast is officially back from the dead.

Hopes for this one, this is not a bitter beer, but I am using three hops. So I want to get to an IBU of about 21. To do that, I have some perle hops here. I have 0.75 ounces. Those will go in 60 minutes. Then I will add in, um, at 15 minutes. Hallertau Mittelfruher and I have half an ounce of those and the flame out another half ounce. This time of Tettnang.

What we can expect from this beer is something that’s Amber in color and taste-wise it’s really that sort of biscuity, sweet taste you would expect from a Märzen. Now it’s called Märzen because in German Märzen means March.

And that’s traditionally when it was brewed where the beer was then loggered over the entire summer. Um, so it was ready to be served in September, at October Fest. I don’t think I’m going to be waiting an entire season though to taste this beer. 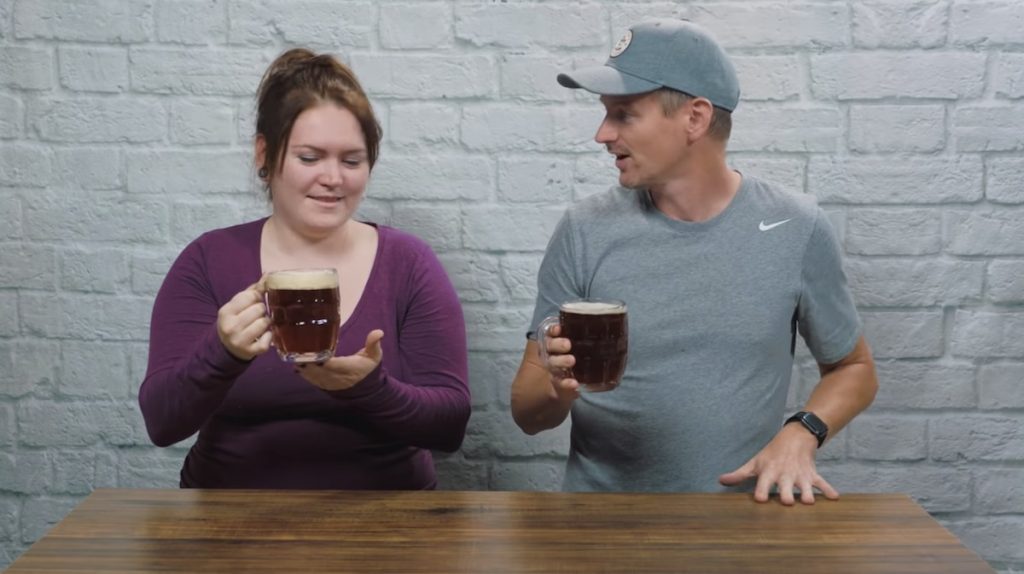 Okay. Tasting time! I have Lauren back. Welcome back. Hi me.

So let me tell you a little bit about the beer. It came out at 1.013, for 4.6% beer. And this thing has been loggering for seven weeks. Now this is seven weeks old. So it’s a lot of the bays are kind of rushed them to tasting. But this one has actually been given the proper amount of time. Now, um, there is something special about this beer that I’m not going to tell you until after you’ve tasted it. Okay. Cause otherwise you might not. Um, right. So let’s take a look.

This is a Märzen beer, Oktoberfest beer.

So have a look. First of all color. We’re aiming for sort of a, uh, an Amber, Amber color. I really like this. I don’t know if your camera can catch it, but the honeycomb glass you’re using is perfect for this. Absolutely. Okay.

So for aroma, now this sort of beer might smell a little bit on the sweet side. Uh, probably no hopper rumor. There’s no hot, sort of a biscotti kind of smell is what you’d expect for a mouse and salvia. Sure, sure. Okay. If I say so.

Hmm. I don’t even know what a Märzen is, but that’s very good. So a Märzen is a typical sort of Oktoberfest beer. Um, what you would expect to get from this sort of beer is, is quite biscuit caramely. Um, but not too sweet. The idea is you want to balance out the hops with the sweetness to get some of the isn’t too sweet. I’ve definitely had some Märzen beers that are like a bit icky sweetness.

Is that where the name marzepan comes from? I have absolutely no idea that it is like later on in the comments. But let’s say it is. Um Hmm. So I, yeah, for me I’m not getting too much sweetness despite the fact that it is quite terribly. Yeah. Um, this beer was brewed with a yeast that was over two years old. Okay.

It was a yeast packet that had been in the fridge in the bar for two years and the beer did fully attenuate. It got down to 1.013, so 6% alcohol. Is this FDA approved? If there’s no more videos, it’s cause we died. It just goes to show that it took a little bit of extra care to bring it back to life, but it’s good. Yeah, it’s good. But no, actually do you never ever think like the Marspan might be Märzen?,

Oh, it’s something like to deal with that. I get that. He’ll edited it out… It’s fine. 😉