How to Brew an Ultimate Haze IPA | David Heath

Transcript: Hello, welcome to the video. And now for something completely different, this video is all about using very basic in equipment and putting together a beer that is very different at the same time.

So after deciding this and making the choice to do a brew in the bag, it occurred to me that this is a great opportunity to use a lot of wheat, rye, and masses of hops to create something extreme that will be great for the summer, that I would not wish to mash with recirculation ever again. And also skip that super slow sticky sparge. 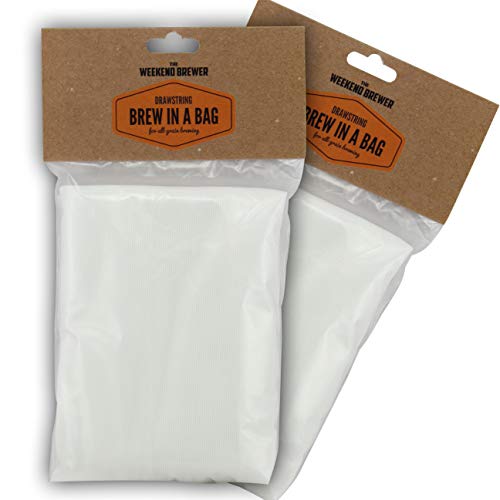 So here’s what I’ll be using for today’s brew. This is known as the Digi boil. It can be used for sparge water heating, fancy french cooking, or as a brewing system.

The choice is yours, but I know what gives me the most fun of these three. A simple pot on your stove will also work just out of mash bag.

The main difference here is that you can set the temperature and let the system handle that side of things. The main differences between this and other brewing systems is that this does not have a pump and thus has no recirculation.

I’ve added a false bottom to this digiboil in part to make sure the bag does not burn on the bottom, but also much more importantly, because I’m going to use a good amount of hops in this one.

The false bottom will act as a filter for the bottom tap when transferring at the end.

I will now go in while I explained today’s grain bill, which is now shown on screen in percentages underneath the vital statistics.

You can see that it has a combination of wheat and rye malt to our massive 75% of this grist. The wheat will certainly being in dominance here at 60%, but we’re 15% rye, it delivers extra flavor for shore.

This is then backed up by Munich malt. Karapils and flaked oats. I have used something very similar to this as part of a different recipe. So I am very confident that this works very well, but the full recipe is my usual tried and tested one. Just to warn you.

If your brewing system has rrecirculation, then I would strongly suggest that you do not use it for this mash. I’ve done it and frankly, it was straight from hell. Much easier to do this as a BIAB this type of brewing is more hands on a lot of fun, or you may need to buy as a mash bag that fits your existing system.

I only suggest this as a precaution also as it will stop all the fine particles from the extra fine grain crush that you will need for messing with your filter system.

Yup. Take this as a fair warning.

Despite the almost SMASH grain crush that I’m using here, I’m not aiming higher than 67% brew house efficiency. I can tell you right now that this worked out just great.

Instead of a regular 60 minute Mash in and 10 minute mash out and going with 75 minutes in total of just mashed in. There really is no need for mash out as we will not be sparging this grain. And trust me, this is really doing this mix a favor, as it simply would be the sparge from the depths of evil hell with all of this wheat and rye combined.

A brew like this is pretty simple many BIAB brewers stir over 15 minutes for three to five minutes at a time. And I am doing the same here. Some will do absolutely no stirring and take the efficiency here up to you, of course, but your numbers are going to be quite far down to the 68% that I’m looking to hit here.

There are definitely some very different stirring techniques involved in this. So let’s go through what they are. Firstly, you can see me here moving up and down to break up the grain. Do this when you feel that the grain is compacted together, this is common at the start of the mash.

Other than this, there are these sweeping movements that you see here coupled with regular stirring. It’s all very simple stuff. This is all done by fearl essentially to stop the grind clumping together on the bottom as much as you can.

This is all about choices though. Naturally grain is cheap, so follow your own path here. There’s simply no right or wrong way. Once you know your efficiency, then you can dial in your recipes accordingly. That’s the important thing here.

After you have finished your mash, then you can remove the bag. Feel free to squeeze the bag afterwards, to remove as much of your wort as you comfortably can.

As you can imagine with such a protien rich grain bill, there was a lot of protein on top that I stirred in before officially starting the boil time at 30 minutes. Some brewers as a pure decision of taste would opt to remove some or all of this protein rich foam.

Personally, I prefer beer with it in, but I would suggest that you try both ways using a brew with the same recipe twice for comparison.

The hops schedule shown on the right hand side of the screen now is one that I’ve used in various shapes and forms before. It is based on the simply genius, continuous hopping technique from Dogfish head brewery in the US, kudos to you guys.

The two main hops used here is Centennial and East Kent Golding’s, which are both favorites of mine. And they work super well together.

So like the grain bill, I have confidence based on past experience. I’ve never brewed this recipe as a whole before. So I’m simply putting together parts that I know work in a different combination.

And again, through experience, I simply feel very confident that this will work very nicely. As you can see from the schedule, this is just a 30 minute boil in total we’ve hop additions given every five minutes.

I used an immersion chiller to cool this one down, starting with adding during the boil to sanitize it. And I then chilled things down to 75C or 167 degrees Fahrenheit. I then added in the last tops with the cooling spiral removed so that I could give them a proper stir in in preparation for the hop stand of 20 minutes.

After this and cooling the wort further, I lifted the brewing system up onto a bench and let gravity transfer the wort from the system into my fermentor. I didn’t splash this in for a change as they do not recommend this when pitching.

I had preset my spunding valve to 12 PSI and then setup my temperature controller to 35 degrees C or the equivalent of 95 degrees Fahrenheit. By the next day, my final gravity was reached and this remained constant for the whole week. I have to say that this setup never fails to impress me.

It works very under pressure or with no pressure at all. Like when using all quake, I used a triple serving of each nutrient and things worked out very well.

Here is an early look at the end result. After tasting this beer very recently, I have to say that I’m delighted in how this turned out. It also looks very much in keeping with its name too.

Make no mistake that is not very tried and tested as a pairing of this grainbill and the hop schedule. But as a first attempt, I’m very happy with how it turned out.

So let’s now run through how this stacks up; the aroma on this particular beer is pretty complex stuff. The main aroma is certainly citrus from the Centennial hops, but this is followed by notes from the wheat and rye. There are also some earthy, piney and floral notes also.

In terms of flavor this is very clean with a good level of citrus flavoring. As you would expect pineapple orange and pear on the tongue to start with a nice dry finish. With the unmistakable taste of Rye, wheat, it finishes the flavor very nicely.

This is actually much more easy drinking than I expected because of the grain bill. It is certainly lighter than I imagined it would be. If anything it’s well rounded and Morrish. The finish is dry, but the overall impression in the mouth afterwards is juicy, a quality that I really enjoy.

For a first try combination, I’m very happy with this. I’m going to continue tasting this. Yes, the things I do for science before I decided if changes are actually needed.

Why not brew it yourself and make your own decisions too. Let me know your thoughts after brewing this, if you have any. I brewed a full batch of this as I was very confident that it would work, but if you wish, then you could simply make a small batch on your stove.

And of course, remember to do this as just a brewing in the bag, no matter how big or small you decide to brew this.

If you are feeling social, then consider joining this YouTube channels Facebook group. Links are shown on screen now for your added convenience. This now brings this video to a close. If you have any questions, then please let me know via YouTube or Facebook.