Coming from the same family lineage of the rest of the Bock styles, the Doppelbock means “double bock.” A double bock is not really twice the bock. However, the name was well received by patrons and so the name stuck, much like the Eisbock.

The first Doppelbock was brewed in Einbeck, Germanyin the 1300s. This beer was brewed with lightly kilned wheat and barley, top fermented yeast at a cool temperature. This was brewed with a fair amount of hops and usually considered a high gravity beer.

As time went on, Muinich breweries started using only barley in their grain bill. The hop schedules also substantially changed. This was in large part due to the high carbonate water found in the region and the not so ample supply of hops. Brewers also switched to a bottom fermenting lager yeast, as was the practice in Bavaria.

Things seemed to be going well for this beer style. The people of Munich really embraced this style and overshadowed the original imported version. Then unexpectedly a set of unfortunate events occured. Fires in Einbeck in 1540 and in 1549, then the beginning of the 30 Years War all contributed to the downfall of this once promising beer style.

In 1627, a group of Fransican monks from Paula,Italy settled in Neudeck, Munich. As has been well documented over the course of history, the Fransican monks are known for their fasting periods. This basically prohibited them from consuming solid food. Instead of feasting on food, the monks looked for beer for substance. This “liquid bread” as it was known as was a higher gravity beer with rich nutrients.

Style Profile and Characteristics of a Doppelbock

Recipe Development for a Doppelbock

There is some belief out there that indicates a Doppelbock should be brewed with at least 80% of Pilsner malt. If a brewer is going this route then the other 10 – 20% will be Munich malt. However, if you can get your hands on Weyermann’s 2 Row Munich malt, this is a viable option. One that I think I prefer. I once read somewhere that most beers are better when they have Munich malt. I wish I could remember who said this because I believe he is right.

If you are going the route of Pilsner malt as your base, then Munich should be added as a specialty grain. CaraMunich, up to 10% and Chocolate malt, up to 2% should round out your grain bill. The real key here is to not overcomplicate your grain bill. The simpler the better.

The hops really do not shine with this beer. Keep the bitterness and the hop aroma and flavor to a minimum. German hops are the obvious choice. Hallertauer, Saaz, Northern Brewer, Perle, and Hersbrucker are all valid choices. Use a single bittering addition and possibly a very small amount, like 0.5 ounces in the last twenty minutes. 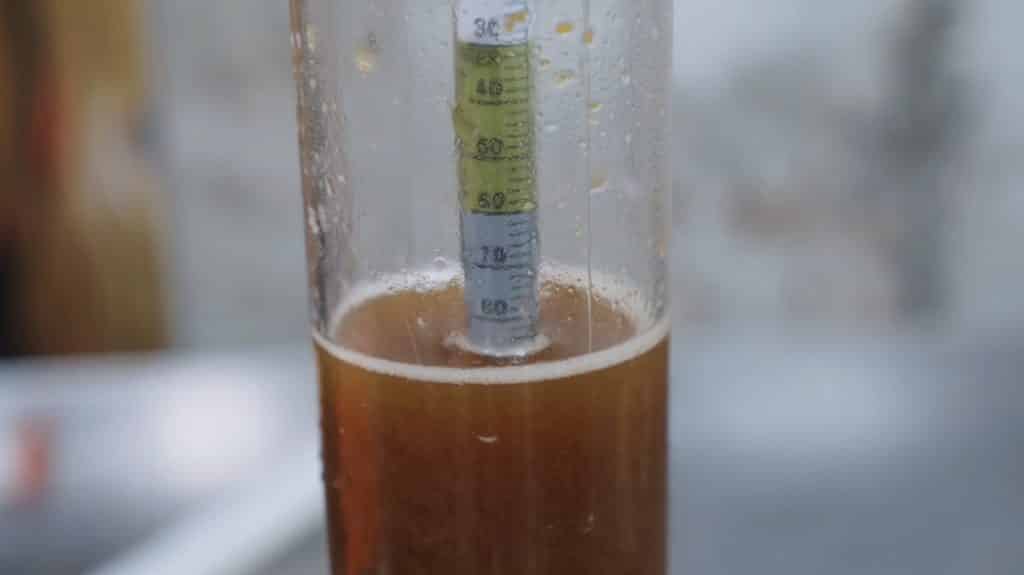 Video Transcript: Today we are brewing a Doppelbock and we’re going to put a new piece of brewing equipment to the test; we’re going to try out a sparge arm.

Hi, I’m Martin Kean. I’m taking the Homebrew challenge to brew 99 different beer styles. Today it’s Doppelbock and I’m here with mr Doppelbock himself. Mr Doppelbock “enthusiast” Hernan. Now we brewed this beer a little while back and I think it’s fair to say it was, it was not without incident. I’m here with Hernan and today we are brewing, Doppelbock. Had a couple of challenges with it the first batch with the new equipement. Yeah, so there’s one of the first beers we brewed with this uni brow system. I had no idea what I was doing and I made a mistake in the water volume that I added when I was calculating this and it screwed everything up. So the first issue that we had was the extremely long mash.

Well, we mashed for how many hours? How many days?

Yeah. So, so one of the other problems that we had was because messed up the amount of water that was in there. The uh, the amount of work that we got was just minuscule. I think by the end we had three and a half gallons.

Yeah. And then is if all of that wasn’t bad enough, then you managed to scold your hand with boiling wort.

And we have a unfortunately a spilling accident.

Yeah. Uh, they hose, we were running the pump and uh, at boiling temperature and uh, one of the clamps came off and the, uh, the hose was just start spraying. Well, boiling liquid and I, yeah, I’ve got caught. But how did the Bayer end up, you ended up taking the cake with you. How did it turn out? Uh, it’s definitely a doppelbock. I’m still sipping. I want to let him, you still have it? I still have it. Wow. And keeps maturing and getting richer. Uh, so that one, uh, not a total failure. The brew, uh, process was, uh, difficult and painful, but I’m still, it tastes like a dopplebock. I’m glad it’s dated that aroma too. I’m glad that the scar that you have on your hand was not completely in vain. Now, no pain, no gain!

Right? So let’s talk recipe for this beer. This is a big beer. It’s known as “liquid bread” by the monks. And originally was, yeah, I mean it was brewed for monks who were fasting and this was how they’d get their calories. So we are building a big bear. It’s going to come out, we hope at 10 84 as the gravity. I said, Hurnan, how are we going to get that? So the biggest thing here, we have 12 pounds of dark Munich. And then on top of that, for the base, I have two pounds of German Pilsner malt. And then the only specialty malt that we are adding is one pound of Caramunich III, which will give us that nice dark, roasty color and flavor that we’re looking for from this beer.

So this is a sparge arm. Now typically you would use this for sparging. So you would do your mash and then in a separate vessel you would sparge water over the top of that mash. But I’m gonna use it in my recirculating Brew in a bag set up. So if I turn it on, you can see what I mean. 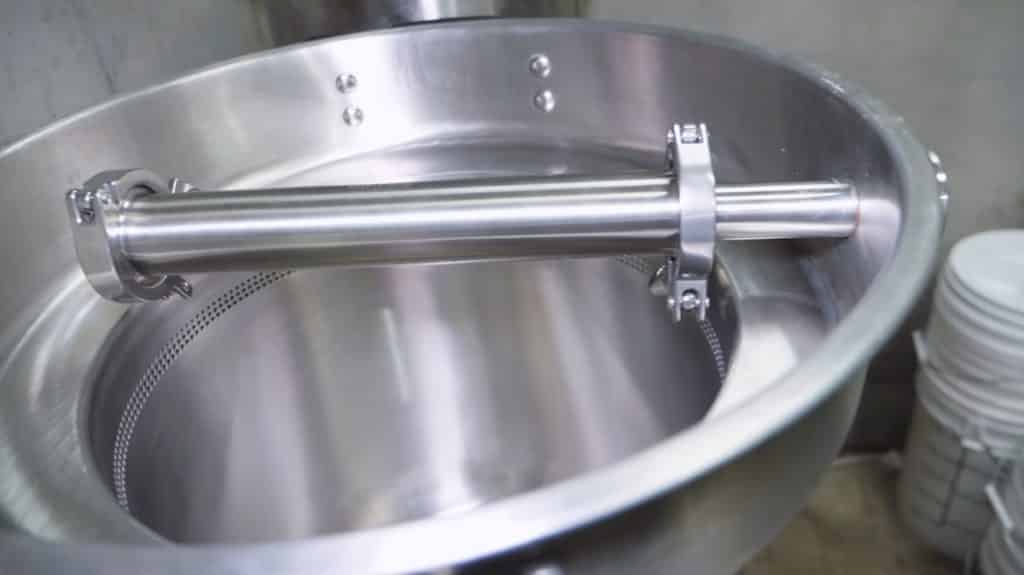 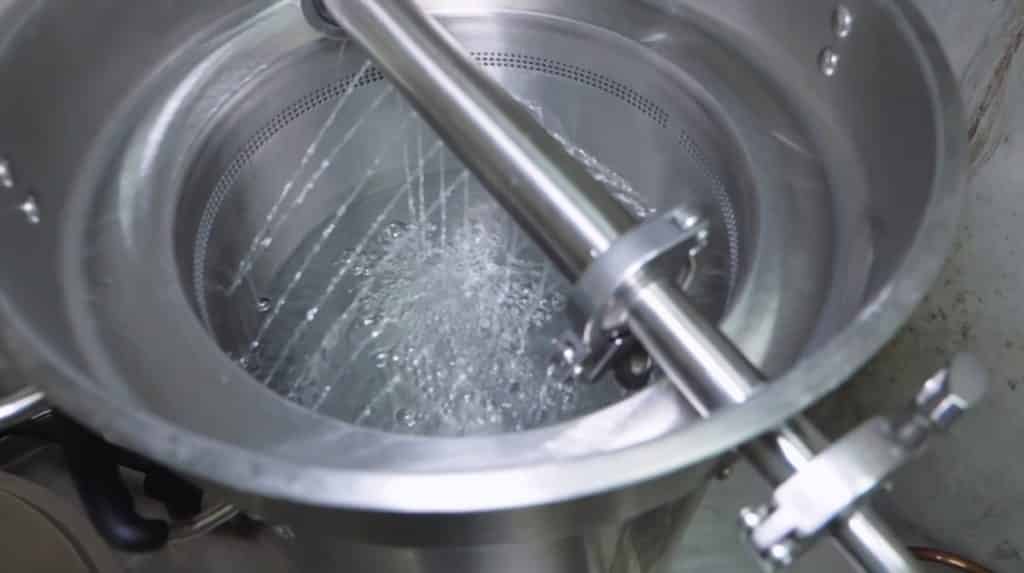 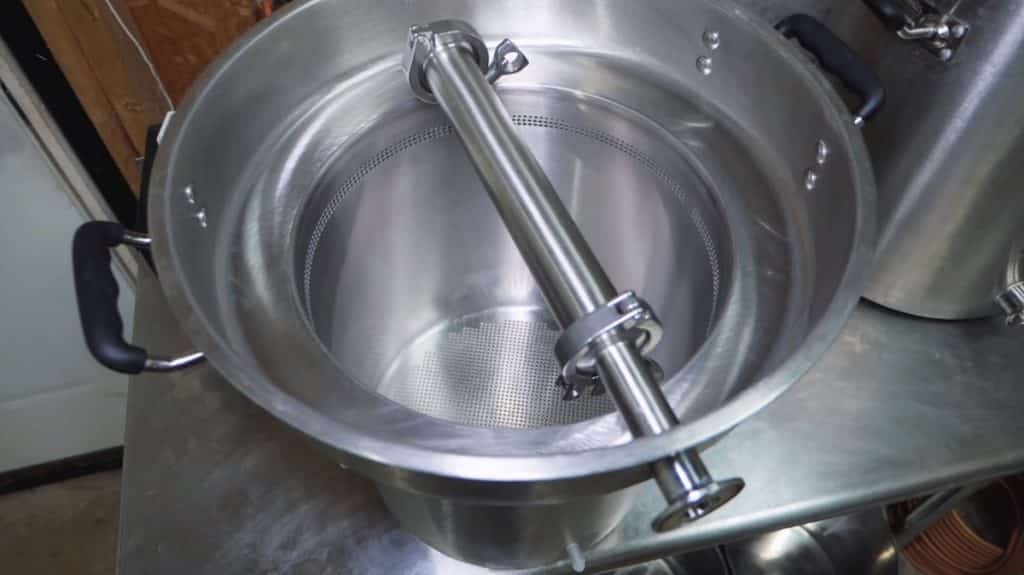 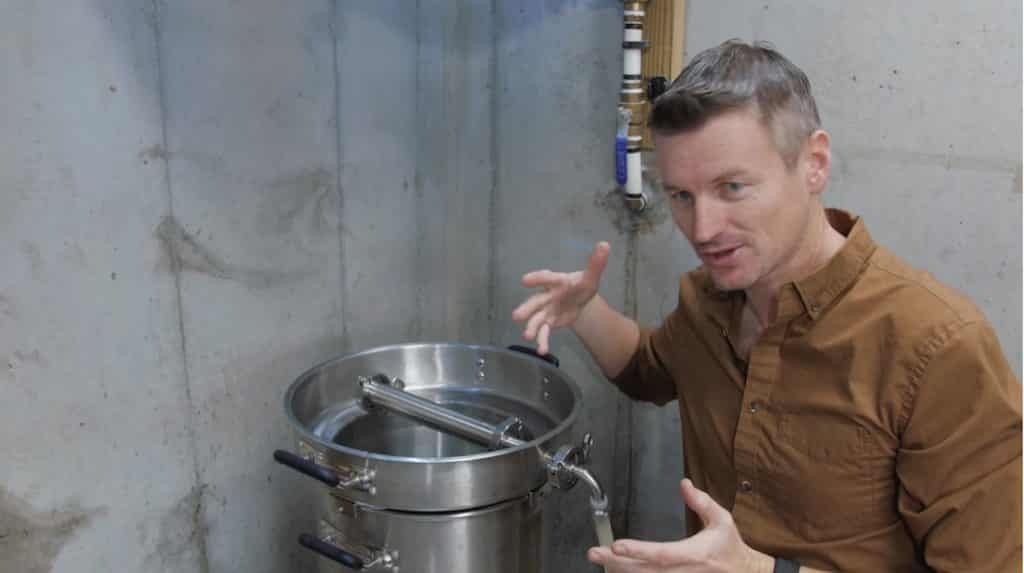 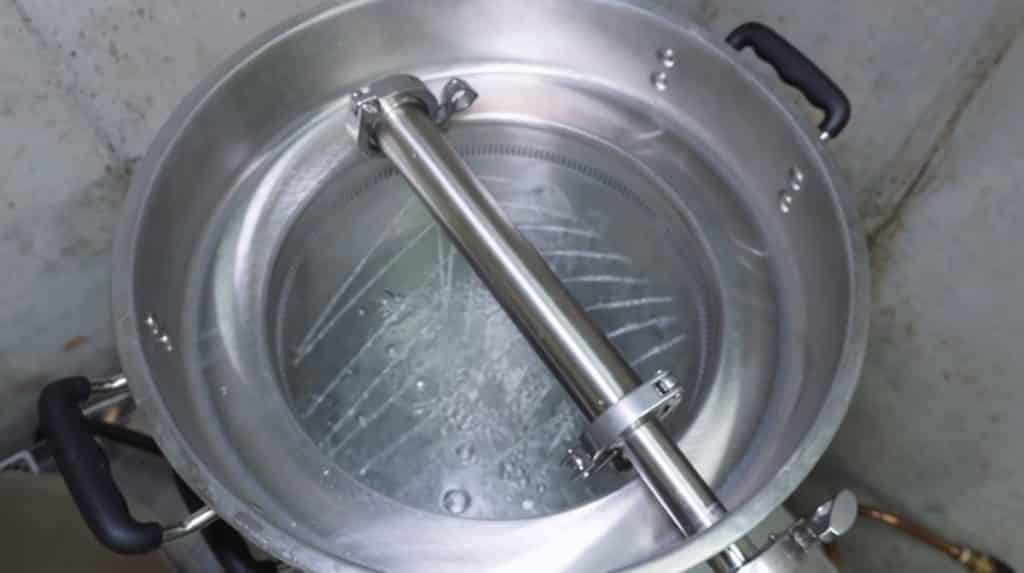 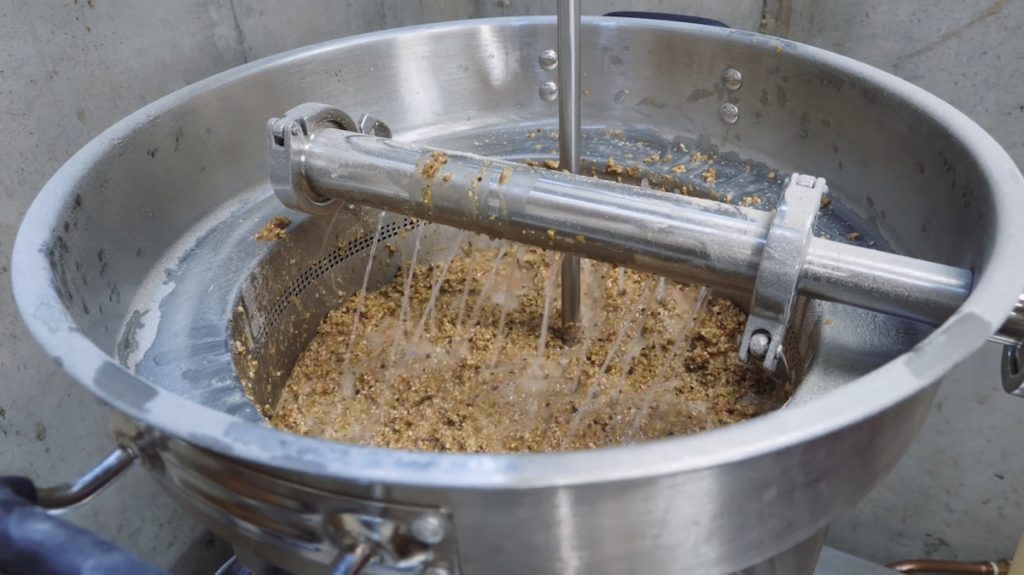 There we go. So we’ve got water spraying out in all directions to the side and down the middle. So my recirculated water should now fall more evenly in the kettle. And I’m hoping that will mean less hotspots in the mash.

Because we have so much grain today we’re going to do a four and a half batch instead of a five gallon.

We are sort of trying to get this balanced right. So I keep changing the power of the pump. Closing and opening again, just to get to the right level so that that’s isn’t pulling too hard and getting stuck. What’s happening with the water level is rising here. If I do it too much and if I do too little, nothing is coming up the sides. But the other issue is that some of these holes are getting clogged. Okay. Well, we have tried out that sparge arm, but we’ve gone back now to the original tubing method. This is just a little bit easier considering how much wort we’re working with here and how much grain.

We’ve got a pre boiled gravity of 10 69 which is what we want. So now it’s a case of getting 15 pounds of grain out of the kettle. No problem. All right, we’ll let that drain then bring it to a boil and start adding the hops.

Okay, so we have put the beer in the fermenter. Now we got to a gravity of 10 85, 10 85. So we’ve got it on the money. Uh, we ended up with a bit over four gallons of beer, so that’s an improvement. But it was, I mean we, we said we’re going to start with four and a half instead of five. And uh, we’d all do, yeah, we’ll go wash in the hoses and mash for minutes. Then we come up right where we need to be. Yeah, I think so.

For the yeast, once we’ve called the wort down to 50 degrees, we’re going to add Wyeast 2308, that’s Munich logger yeast. And let it do its thing. So, uh, looks like we had some success. Any burns or anything this time? Nothing has all how old the fingers. Well then we’ll call that a succes!

It is six weeks later and we are going to taste this thing Doppelbock. Now, uh, you may have noticed new set a new set design here. So what this actually is is a bit of plywood would fit put up yesterday and then got some, some tape, some flooring tape and then put this vinyl flooring, uh, up here behind us. So gone is the old, uh, fake brick wall from the blanket. And now we actually have something.

Killed the mystery. Yeah, I know, I know. All right. So, uh, the notes on this beer, as I say, this is six weeks old and the beer finished at 10 20, which is what we expected. Uh, it was a bit higher gravity finishing then, um, some of the other beers that we’ve done, but for the style that’s about right. And this has come in as an 8.5% abv, which is what we were going. 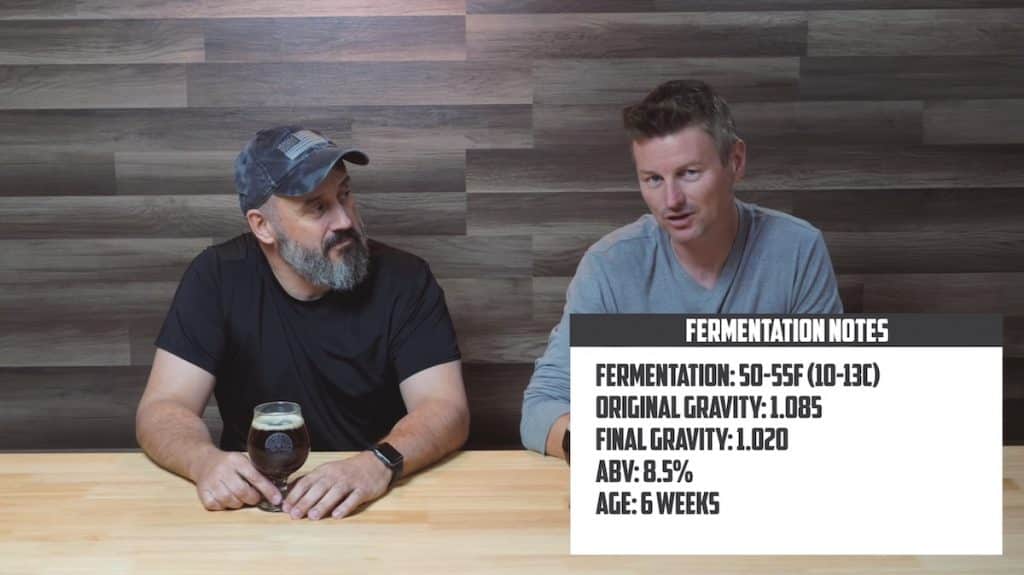 Yup. Um, I know you would be most upset if this 7% or something. What’s the point right? It’s a Doppelbock. So why bother? If you go below eight, why bother? All right. So I am very curious to have, uh, the, the Doppelbock expert. Tell me about this beer. So first of all, what do you think about the appearence? So it’s not super dark. We’ve done, I love darker Doppelbocks. Yes. Um, this one has some copper tones to it. And then what about aroma? There’s some sweetness to it. Yeah, right, right. There’s some caramels tones to it too. Yeah. Well, honestly, I think we just need to try it. Let’s just try it out. All right. I can’t wait anymore.

Oh, good. Well, let me do real good. But yeah, I said really nice finish. Yes. So there’s a definitely a sweet kind of, um, sweet flavor to it that I guess that liquid bread kind of thing. You can, you can taste that, but there’s also a really nice multy profile to this. Yeah, it was pretty good. I think we did good Cheers, Cheers!

If you like this one, you’ll love the Eisbock Recipe from Martin and Hernan.