How To British Strong Ale

British Strong Ale is somewhere between an English Pale ale and an English Barleywine. There are very few examples out there that can be found today in the United States.

If you are lucky enough to find an example of a nice British Strong ale, it is probably a seasonal or limited release.

As per the BJCP Guidelines, British Strone ales are historical recreations with some descending from older styles such as Burton ales. With the high alcohol level, the British Strong ale is almost certainly a modern British category.

This rich and complex beer blends a bold mix of malt, fruity esters and flavors. The hop presence of an English Strong ale can be mildly bitter.

Driven by a more specialty malt character and less noticeable hop presence, than the American Strong ale. If this beer is brewed, it is usually aged in barrels to give the beer a more complex character.

English Strong ales are usually unfiltered and/or bottles conditioned. They range in color from amber to copper. English Strong ales usually have an ABV ranging from 6-11%. This beer is best when served in a snifter or an English pint glass at a cool temperature.

The aroma is malty-sweet with fruity esters, a complex array of dried fruit, caramel, nuts, toffee, and/or specialty malt aroma. Some alcohol notes are acceptable, but should never be perceived as “hot.”

Hop aroma can be earthy, resiny, fruity, with some floral notes. A nice blend of malt, fruit, hops, and alcohol in various intensity.

The color should be gold to dark reddish-brown. Clear, although darker versions may be almost opaque. Moderate to low cream – to light tan-colored head. The head retention is average.

Medium to high malt character with a nutty, toffee or caramel-like flavors. Light chocolate notes sometimes found in darker beers. Balance is often malty but may be well hopped. Moderate fruity esters are common with some dark fruit notes.

The beer may finish dry to a little sweet. Alcohol strength should be noticable, but never overwhelming. Diacetyl is low to none and is not very desirable in this style.

Medium to full mouthfeel with a “chewy” body. Alcohol warmth is often noticeable and actually welcoming. Low to moderate carbonation with a smoothness.

With a smooth and creamy mouthfeel, English Strong ales pair well with roasted or grilled lamb, beef, or salmon.

Tips for Brewing your own British Strong Ale

Since the style is a traditional English style, British pale malt would be appropriate. Maris Otter is a solid choice. As specialty malts go, start off with some British Crystal 45. This will give the beer a pretty decent toffee and toasty background.

As for the dark malts, consider the following: chocolate malt and black malt. Avoid roasted character in this style. These malts will give the beer the nice dark color you are looking for in this style.

A touch of flaked barley, maize, or whear will give you some nice added graininess to the beer and help with the roundness of the beer. To dry out the beer some and give it some extra gravity numbers, consider adding sugar.

English hops such as Fuggle, Challenger, and East Kent Goldings, should be considered when brewing an Foreign Extra stout.

The hops will be used for bittering and then also a later addition should be added for aroma.

Also, look for yeast that produce interesting fruity esters to pair well with the style. Follow the temperature recommendations with any yeast that you pick.

British Strong Ale the By the Numbers

Transcript: British strong ale has quite a wide variety of characteristics. It can be strong enough that it’ll really just be a sipping beer, or it can be something quite sessionable.

It can have a deep, rich color or be light Amber, and it can be something that is cellared and aged or a beer thats enjoyed young.

Lots of decisions to make, let’s brew one.

I’m Martin Keen, taking the Homebrew challenge to brew 99 beers in 99 weeks. And which British strong ale have I elected to go for? Well, after brewing a bunch of stouts and high gravity beers, I’ve elected to brew a beer that is less strong.

So 5.7% ABV as aposed up to 8%. And this one is really going to focus on the fresh, easy drinking and pleasantly hopped.

So I’m building a beer here with an original gravity of 1.061, the style guidelines that say it’s okay to go all the way up to 10 80 if you want to brew a much stronger version of this beer.

Now my base malt for this is Maris Otter pale malt. That is 84% of my grist. So that’s going to give me a nice sort of biscuity, toasty backbone to this beer. Then I’m going to add in four specialty malts each at 4%.

So it starting with crystal 45 at 4%, which I seem to be adding into all of my British beers these days. And also 4% of Amber malt. Then I’m going to add 4% of aromatic malt for that smooth and toasty characteristics that you get from that. And then for body and for the head retention, I’m going to add 4% of flaked barley.

I have here in my basement five chest freezers. And if they were left to their own devices, they would be freezing everything. I use a temperature controller to regulate how cold those things get.

And I’ve got a bunch of different temperature controllers here to take a look at, including some brand new ones, which I’m going to do an unboxing. Ooh, this is YouTube unboxing videos, right?

Now, when I started out, I bought these temperature controllers from Johnson controls at the time, this was pretty much the only thing I could see that was available, but it’s these controllers that finally enabled me to set a temperature and to make sure that my chest freezer stayed to that temperature by inserting the probe inside of the chest freezer.

But I want to show you some of these controllers I’ve got here because I think they all do something a little bit different. So let’s start with the inkbird controller because I have two of these in operation in my brewery already. And what I really like about these is they allow both heating and cooling. So there are two separate plugs here. 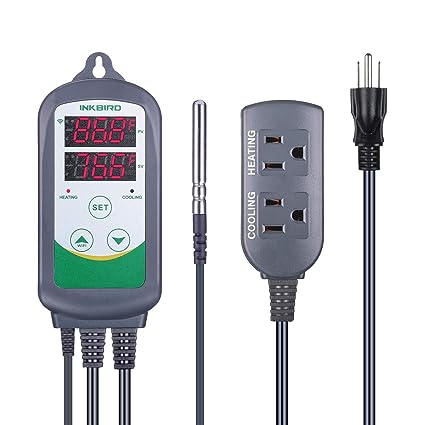 So what I do is I plug in my chest freezer into the cooling plug and then in the heating, I plug this into a space heater that I’ve put inside of my, um, inside of my chest freezer. And that way, if I need to warm something up, I’m able to do that as well. So that’s the ink bird.

These things are really good. And, um, yeah, I’ve been using these for quite a while. Okay. Now let’s have a look at some of the new stuff.

This temperature controller was supplied to, to me by Anvil brewing. And this is a little bit different in that. Well, there’s a lot less to it. There’s a temperature probe and then there’s the controller itself.

So yeah, a nice compact solution. And I’m actually going to be using this in an upcoming brew day. Two more, these never out of the box. So looking forward to opening these, these are from Digiten, they were supplied to me by Digiten.

And let’s take a look at this one in particular is pretty interesting because it contains a remote control.

So if we open this one up here is the temperature controller, which needs to be nice and compact and much like the, the anvil one, this one plugs directly into a power outlet. So that’s nice and tidy. And then it’s also coming with a remote control. Also here that should be a temperature probe somewhere. Yep. Here it is.

So we can take the temperature probe and plug this into the controller. Now, what I typically do with these probes is I put them in a beer bottle that is filled with something alcoholic, normally vodka or rum so that it won’t freeze. And that way I get a bit more of an accurate reading of liquid temperature rather than just the out the ambient air temperature.

And I can also see the current temperature as well. So this is kind of the lazy man solution. If I don’t want to walk all the way over to my chest freezer to change the temperature or just to check on it, got a remote control here for it. This one is also really inexpensive..

And it does have the ability to switch between heating or cooling, depending upon what you plug into this. Now, this one is, uh, I think $8, more expensive than the one with the remote control. But this temperature controller from digiten is more of a traditional controller that plugs into the walls.

So we’ve got the controller here and then the output. So we can plug in our heat source or our cooling source, the plug that goes into the wall and then the temperature probe.

Maybe I need some new chest freezes to go with them.

Now, the hops for this beer, I’m using fuggle as the bittering hop. So I am going to get about 33 IBU from my bittering hop in a five gallon batch you’d throw in two fuggles.

And then at five minutes left for flavor and aroma, best prime adding in East Kent Golding. This will contribute about another 4 IBU. And if you bring five gallons, that’s one bag.

I’ve hit my original gravity of 1.061. And I’m going to be adding this floculant beast. This is Wyeast 1968 London ESB. It is super lumpy. It also has a fairly low attenuation.

So I’m only expecting this beer to get down to a final gravity of 1.018, which will leave just a touch of sweetness in the beer.

All right, tasting time. Welcome Lauren. So British strong ale. Um, let’s take a look of the color of this one. I was curious to see how this was going to come out. Um, if it was going to be dark or super dark or not, I was trying to go for a little bit more of an Amber color. What do you think? Um, it is Amber. Yeah. Yeah. It’s sort of a deep orange color. Yeah. Let’s see what we get on the aroma on this one. Matly, biscuity maybe.

Um, well, let’s give this one a try first. What do you think about the taste?

First of all, I feel like Robin hood and his Merry men were drinking out of this glass. Um, taste-wise, it has a sweet taste to it.

Hey, it does, there’s a sweetness here that I wasn’t expecting to couldn’t get anything on the smell of sweetness, but there’s a, um, very much a malty sweet character.

Now I am a fan of bitters and I really enjoyed the best bitter and the ESB that we did, but this is definitely much sweeter than those beers.

I liked the ESB, it was good.

Yeah. I actually really like this one and I know my dad would, your dad would like that one. All right. Well, everything you need for this beer is in the description as always. And we’re going to continue with the British theme, uh, next week with something a little bit older. Fun! Cheers.