Munich Helles was first brewed out of necessity. It was brewed as a way to compete with other brewers who were developing styles in other parts of Germany. More specifically, Josef Groll, was developing recipes for a new style of beer in Plzeň, Bohemia.

This beer Groll developed quickly became the new beer wave all throughout Europe. Many tried to copy this trend as well, except for Bavaria.

Bavarian brewers at first turned their noses to this new trend. They stubbornly grabbed their pints of brown dunkles, bocks, and märzens. Here they stood their collective brewer’s ground. As the Bavarian brewers would walk through local beer gardens, the shades of brown and amber liquids were seen being consumed by the locals. However, change was a comin’. As bright as the morning sun, a golden beer was on the horizon.

Throughout his thirty plus years as the owner of Spaten Brewery, Gabriel Sedlmayr transformed the brewing scene in Munich. After Sedlmayr’s death, his sons Gabriel II and Josef took over. Sedlmayr II was much like his father, creative and extremely innovative. As we learned with the Vienna Lager, Sedlmayr II met up with Anton Dreher, and became interested in new innovation in the kilning process. Also, the installation of refrigeration technology spurred a new way to respond to the pilsner question that was looming.

In 1894, Spatan released their very first golden lager. They would call it helles, which translates to “bright,” “pale,” or “light.” This new beer from Spatan was a touch lighter than the Bohemian Pilsner. As its counterpart relied on a significant hop presence both with aroma and bitterness, the helles’ claim to fame was its stronger malt character.

This new found “light” that Spatan casted on the Munich brewing scene was well received by the locals. However, the Munich brewers were not so quick to fall in love with this new style. They claimed tradition was being ignored.

As Jeff Alworth in The Beer Bible points out, the brewers in Munich “threatened to form a dunkel coalition committed to blackballing helles.” In the end, helles became more popular and even these same brewers who were against this beer were actually brewing this new style themselves.

Color ranges from yellow to light gold. Beer should be crystal clear and have a creamy, good sized, lasting white head.

Aroma is grainy sweetness. Very slight notes of DMS is acceptable. Ideally, it will be clean, bright aroma, and fermentation profile. Low hop aroma, which is expressed as floral, spicy, and/or herbal.

Medium maltiness of sweet grainy and slight breadiness. There is a soft roundness on the palate. Hop bitterness is only balancing at a low to low-medium level. Hop flavor is the same as the aroma floral, spicy, and/or herbal.

Due to the maltiness of a Munich Helles, this beer pairs really well with a pizza. German food such as bratwurst and sauerkraut is a good pairing. A Reuben, bacon, ham, pretzels all are good choices. Fish such as flounder, sole, crab, shrimp can also play well. Cheeses such as Chevre, Mozzarella, Brie, Gouda, Cotija, and mild Swiss all pair well with a good Munich Helles.

Munich Helles By the Numbers

Tips for Brewing your own Munich Helles

A high-quality Pilsner malt has everything you need to make a good Munich Helles. This malt will provide enough color and grainy-sweet flavor that you are looking for in this beer. It really is that simple. If you want to get a little complex with your grain bill, you can add anywhere from 5 – 20% of either Munich or Vienna malt. If using Munich, it is suggested to keep it on the low side.

If you desire to add any specialty malts, keep it under 10 percent of the total grist. Some specialty malts to consider include, CaraPils, Carafoam, or Wheat. All of these malts are known for their ability to help with the head and overall body of the beer. Ray Daniels in his book, Designing Great Beers, advocated for some Belgian Biscuit malt to add a little biscuit character. I believe this is what Martin was after when deciding to add some Victory malt to his recipe.

Usually you will want to keep your hop additions with the Noble hop family. Tettanger, Hallertauer, Saaz, Spalt are your choices here. You could decide on some American hops that have proven to be hybrids of noble lineage; these include Crystal, Sterling, Perle, and Mt. Hood. Since Noble hops have a low amount of alpha-acids, you may be adding a little more to hit the IBU mark.

Usually a decoction is traditional for a Helles recipe. You can also consider a two-step infusion mash. The steps for an Infusion Mash include the following:

Welcome to the Homebrew Challenge where we are brewing all 99 beer styles. I’ve got Hernan to help me today. Hernan, what are we brewing? ????. That’s right. We’re brewing Munich Hellis,… Lets do it. 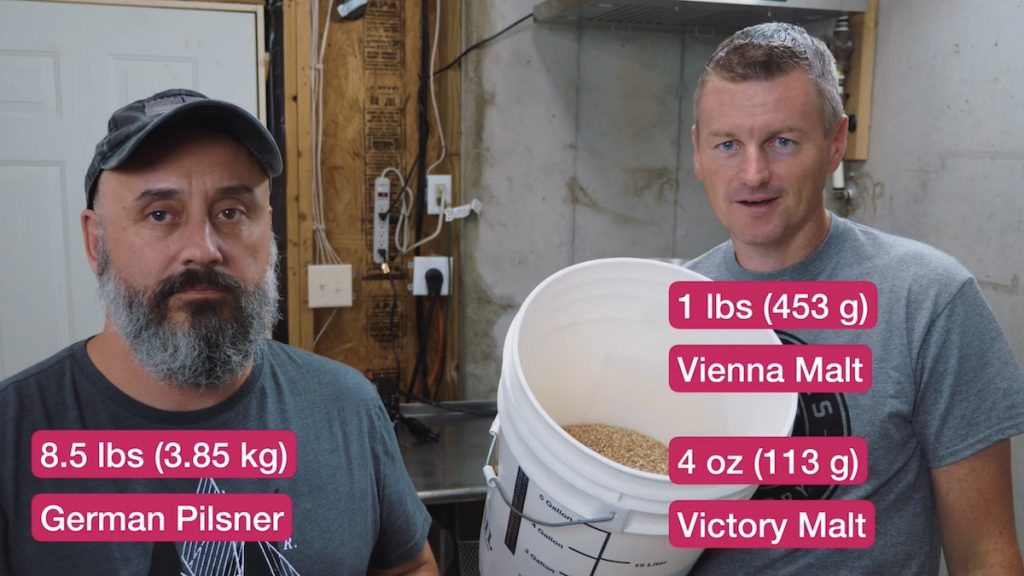 So we have freshly milled grains and, um, what’s the basemalt for this one? 8.5lbs of german pilsner, Right, And then to add to that we have added a pound of the vienna malt and then just four ounces of victory malt.

And this should give us a beer around 5.2%. We are going to mash in now at 148 Fahrenheit. 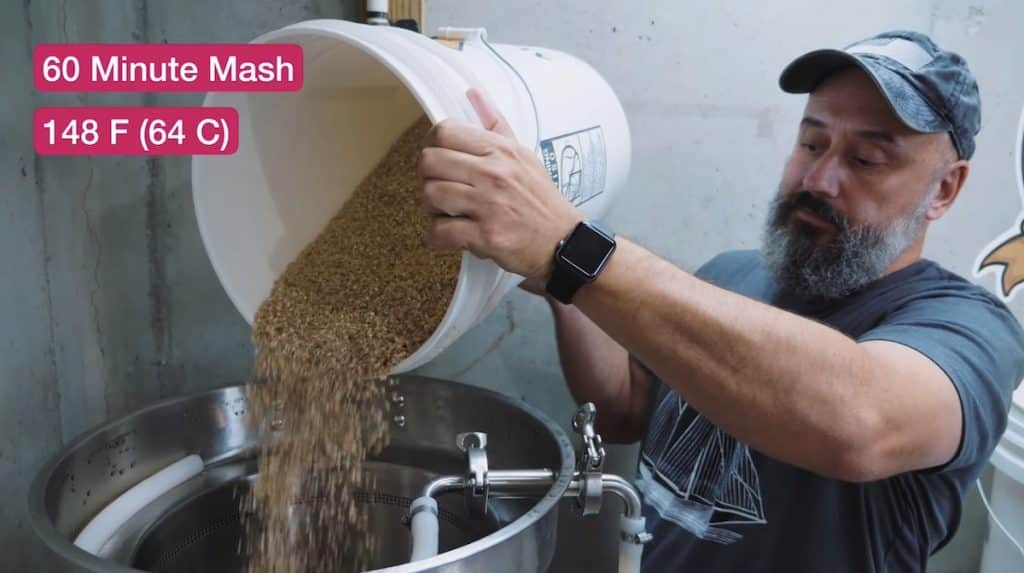 As far as the BJCP guidelines go this beer is the first in a new category for me, it’s category 4; pale malty European lager. And for European, you couldn’t really read German because all the styles are really primarily German beers. And this one is 4A, which is Munich Helles. And according to my guide, this beer originated in 1894, by Spaten and is now the most popular beer style in Southern Germany. And Southern Germans, you have extremely good taste because I’m a big fan of this beer style too.

Now Munich Hellas it’s one of those styles that people will often say, this is a real test of your brewing prowess, because there’s just no were for off flavors to hide. The thing is about that…. I keep hearing it!

I keep hearing it with so many of the lagers that I have brewed so far, but I did get the point, but this beer is malty without beeing sweet and it’s a slight hop bitterness without being particularly overpowering. So it’s going to be a challenging one for us to brew. 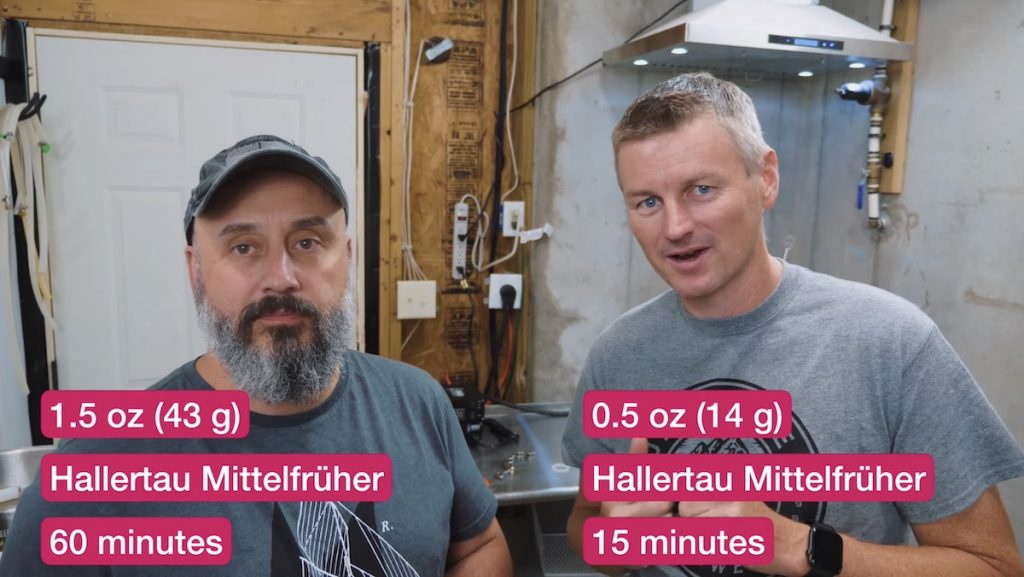 Right? There’s a challenge. Can you say that? Hernan has been taking German lessons. So Hernan, what hop are we’re using here, we’re using, I’m going to read it, literally hallertauer mittelfrüh, and I butcher it. So we’ll take comments on how to pronounce it….

But basically what we want to do here is, um, we’re using this for bittering and the flavor and the aroma hop. So one and a half ounces is going in at 60 minutes. And then at 15 minutes, we’ll put another half an ounce in, that should do it.

Hallertauer mittelfrüh? Apparently there was a leak on the previous brew. I think we have it fixed now.

The yeast. It’s Wyeast 2308 Munich lager yeast. Made a starter too for this in advance. 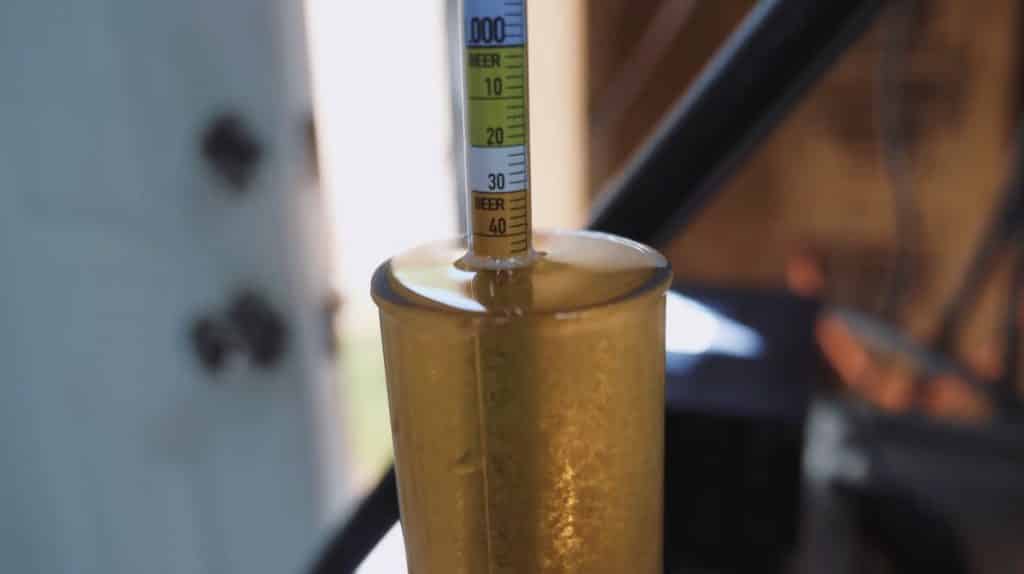 So we’ve got a gravity of 46; correction for temperature, uh, 48. And we were shooting for 48! Right on the money.

No, this is, uh, this is four weeks on time for our tasting actually three weeks and six days, 3.5. Yeah, we couldn’t wait any longer. So we’re going to, we’re going to have a go at, so, so first of all, let’s take a look at the parents of our Helles beer. What do you think? It’s pretty clear. Yeah, it’s very light side. Uh, it looks good carbonation. 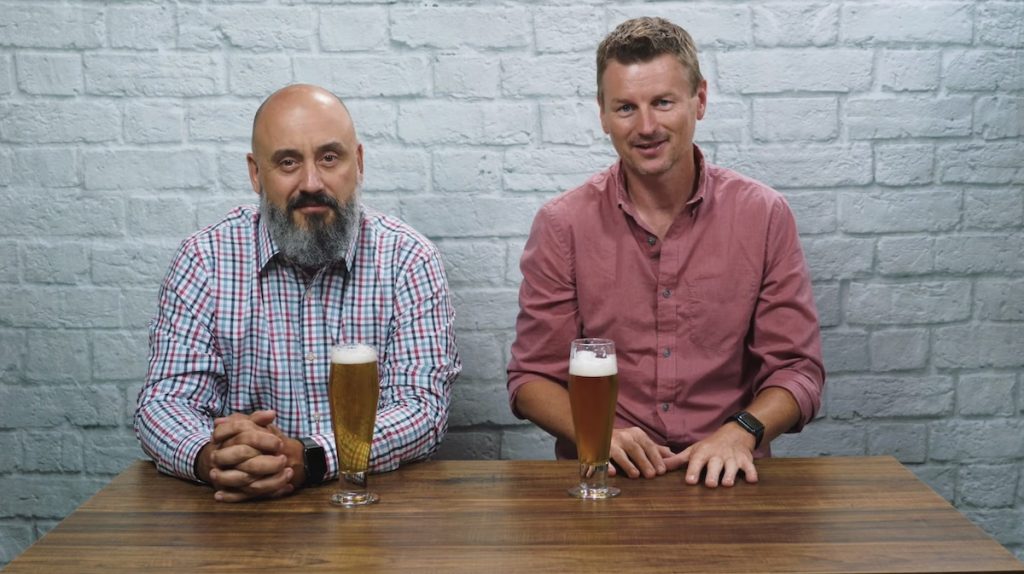 Yup. Yeah. This is a good one. Oh man. For me, I’m under four weeks. Yeah. I’m very surprised at the crispness of this beer, given the fact that it is only four weeks old or those two, a little sweetness and you can even, this is pretty good. Yeah. So, okay. So, so you’re surprised by its tasty despite its age. Let me surprise you further by telling you something we don’t know about this beer, or you should not the one we brew and then that will be good.

The thing you don’t know about this beer is there was an accident. Um, during fermentation. Now you’re telling me now I tell you, so the temperature probe on the freezer malfunctioned and I completely froze the beer, like 100% block of ice in the fermentor, in the fermenter. And this was before fermentation had, so this was like right at the start.

So maybe like two days into the fermentation, I froze the beer and did not know what to do. Now, what I ended up doing was defrosting the beer and then just hoping that the yeast was restart and amazingly about the day after it defrosted, the bubbler started bubbling again. And it ended up attenuating all the way down to 1.008, Which is what we were expecting it to get to. So despite freezing the beer, it ended up recovering and being just fine so that I’m not surprised it would have been the other way around if it went too hot.

And then I killed the, uh, the, uh, the yeast, but the appreciative frozen yeast didn’t seem to care too much about that. Um, it’s pretty good. Yeah. I’m pleasantly surprised. I’m pleasantly surprised it made beer at all because of the problems and even more surprised that I have all that’s come up. Yeah. It’s pretty clear too. Maybe the freezing it ready? Pretty. What’s on the clarity there. That can’t be all the suspension stuff, right? Yeah. Who needs gelatin when you could just freeze? Cheers. Cheers.