The following is a guest post from Homebrew Academy reader David from New Orleans. David is a true DIY’er, making beer, spirits, wine, cheese, kombucha, and many more homemade treats.

Most craft beer lovers and scotch whisky aficionados are unaware of how similar their beloved beverages are, both in composition and in production.

In its simplest form, beer is:

…distilled, and aged in barrels.

So pretty much the same exact ingredients, with just a few added steps to make scotch.

Distilling is essentially refining and concentrating a liquid

[DISCLAIMER 2:  This post is meant to be an overview of distillation and the differences between distilling and beer brewing. It is NOT meant to be a step-by-step post on how to distill, so do not use it for that. There are many more details involved in distillation than provided here.]

With scotch whisky, you in a sense have “concentrated beer”.  The part that is concentrated is the ethanol, but the base favor is the same base flavor that is in the beer.

I’ve been homebrewing for about 8 years and have been home distilling for about 5.  I got into home  distilling because I really enjoy single-malt scotch.  You know, the REALLY peaty, smokey, kick-you-in-the-face kind from Islay.

A few years after taking up homebrewing I got to thinking: “Scotch is pretty much distilled beer, just without the specialty malt and hops. I make my own beer, so why can’t I make my own scotch style whisky???”

Then I realized I can… and I WILL!

I read up on the process, constructed a still out of an old Sierra Nevada keg and some various sizes of copper tubing, and was ready to rock ‘n’ roll.

In the the first batch I distilled, I made a test wash out of 25lbs of sugar and turbo yeast. Sugar is cheaper than barley and if I was going to fuck something up, I wouldn’t be out as much money with the sugar wash.

Everything was filled and hooked up. I sat down, cut on the propane burner, turned on the water for the water jacket, and waited…watching the column temperature like a hawk.

After what seemed like forever, the temperature FINALLY got to where it was supposed to start doing something.

I waited more… waited some more… nothing…

“SHIT… I must have screwed something up when I was brazing the still.”

Just when I was about to reach down to turn off the flame and throw in the towel, IT HAPPENED.

Clear liquid started slowly dripping from the collection tube of the still into the glass collection jar. So I just sat back and watched the stuff slowly drip drip drip and begin to fill up the jar.

I was like, “HOLY SHIT… THIS ACTUALLY WORKED!!!”  I’m not going to lie, I felt like a mad-scientist. I felt pretty fucking cool. 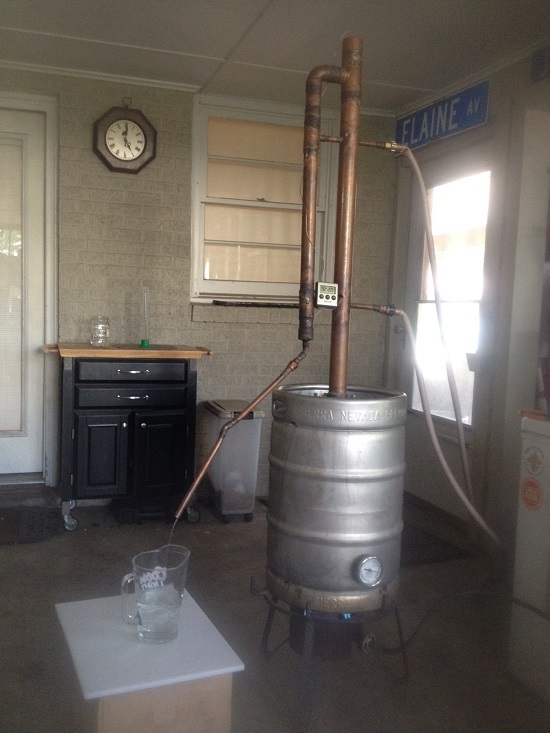 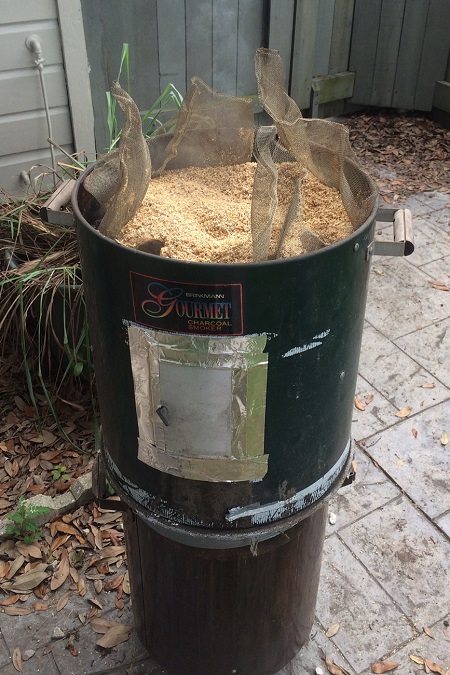 Makeshift malt smoker: Electric smoker at the bottom w/ pot of peat moss and a column from a charcoal smoker in the middle to hold the grain for smoking.

I made moonshine. Now it was time to make whisky.

After that first test run, it was time to start making the scotch-style whisky that I built the still for. (even though on occasion I “STILL” <get it?> make the rot-gut moonshine to sell (which is totally illegal) to dumb people who like that stuff.

This is where one can see the similarities between homebrewing and homedistilling.

As I said, I enjoy the really smoky/peaty Islay scotches, such as Laphroig 10yr, Lagavulin 16yr, Ardbeg, Ladaig, etc.  This is the type of whisky I wanted to create. So I went to my local homebrew supply store and bought a 50lb bag of malted barley and some turbo yeast and went home and went to work.

Some scotch whisky distilleries, especially in Islay, use peat moss cut from bogs as fuel for the fires when they kiln their barley for use in their whisky. This imparts the smoky, peaty, campfirey flavor and aroma that I enjoy.

This is quite similar to what craft brewers and homebrewers may do for specialty beers such as smoked porters or rauchbiers when they smoke base malt over such things as applewood or cherry.

For my homemade scotch-style whisky, I smoked my already malted barley over peat in a homemade smoking chamber (you know how homebrewers can get creative when it comes to brewing gear).

After smoking, it’s time for the mash. This is pretty much the same as brewing beer. We are converting the starches in the grain into sugar, so the yeast can turn into alcohol.

We don’t have to boil it b/c there are no hop additions, so after the mash is cooled, it’s time to pitch the yeast. Within a few days, the turbo yeast brings the mash up to around 15-18% abv.

Think of this substance as a really strong, bland, smoky-malty beer

That substance goes into the still to be converted into clear whisky.

When the whisky emerges from the still it is around 70% abv. It taste really rough and needs to be aged, similar to how craft brewers will age an imperial stout in bourbon barrels, or a flanders red in wine cask.

This process mellows out the final product and also adds new complex flavors. I like scotch whisky as opposed to American whiskeys because I find they are less sweet.

There are said to be over 100 wood sugars in the charred oak barrels, and different temperatures and techniques of charring can give aromas from nutty, toasty, roasty, and even acrid. Part of the flavor in whisky comes from the ingredients, but the barrels make a huge contribution.

Scotch distilleries use barrels that were previously used to make American whiskey. The first use by the bourbons or Tennessee whiskeys draw out a lot of the wood sugars into the American whiskies and leave less of the wood sugars to be imparted into the scotch whiskys after re-use of the barrels down the road. This tends to make scotch whiskys less sweet than their bourbon counterparts.

Aging the clear whisky adds color and smooths out the spirit, making it easier to drink. The longer you let it age, the smoother it gets and the different flavors are imparted.

Got leftover beer? Turn it into whisky!

I hate to waste anything.  I try to re-cycle, re-purpose, or give away whatever I can instead of tossing it in the trash.

Beer is no different. Sometimes I may have one keg with only a few pints left, another with maybe a gallon of a beer I wasn’t really diggin’ , or even a 1/4 of a keg of macro left over from a friends party.

Instead of dumping them down the drain, I “recycle” them into “beer whisky.” Because after all, whisky is pretty much distilled beer…

You may think I’m crazy, and you may be right, but if you keep the temperature relatively low (I’m not going to get into the technical aspects of distilling right now) you can collect higher levels of ethanol with lower levels of the beer flavor and thus hops.

It’s best to use beers with lower levels of hops like stouts, porters, lagers, wheat beers, etc. as to not impart any of the hop characteristic. But you can distill anything. After running the old beer through the still a couple of times to clean it up, I age it just as I do my scotch-style whisky.

And it turns out pretty fucking good!

And guess you can say I am “going green” at the same time!

If you homebrew already, the leap into distilling isn’t as far as you may think!