Generally, these two are the same. Barley simply refers to the seed or plant grain, while the malt is the result of that dried barley seed sprouting through a process called malting.

Why is this important? And what does it have to do with beer? For starters, barley in beer is the equivalent to using grapes for winemaking.

In this guide, we’ll you everything there is to know about malt, its process, how it influences beer, and its varieties.

What is Malted Barley?

First things first, you should know that barley is a type of cereal grain, much similar to wheat and corn, for example. Essentially, you can malt any grain. For corn, it becomes malted corn, and the same goes for wheat.

We add the term “malted” because of the process that barley goes through: Malting.

During the malting process, you allow the grain (barley) to potentially germinate, followed by drying and heating the kernels.

Germination is necessary to unlock the sugars, protein, and starches found in the seed. This is vital for your yeast during fermentation too.

Once the sugars, protein, and starches are released, the drying and heating process stops the germination to keep the seed from growing into a new plant.

The brewing process of malting happens in three stages: Steeping, Germinating, and Kilning.

The first step of malting is seeping. The concept is very much like how you water a seed to let it grow. Seeping is necessary to provide hydration to the barley seed to start the growing process.

Steeping will usually last for 2 days, where the moisture content is raised to an average level of 45 percent.

Once the steeping process has begun, the germination will follow shortly after.

During this stage, the seed starts to grow, and all the sugars, protein, and starch are released.

Kilning is the final stage and is usually where the barley seeds are dried or heated to a temperature between 55 and 100 degrees Celsius.

Kilning is vital because it can impact the color and flavor of the barley and also stops the seed from growing into a plant.

One of the biggest reasons why brewers prefer barley as the grain of choice is because of its ability to retain its husk while it’s harvested and malted. This provides three key benefits:

Most of all, brewers prefer barley because it has a higher concentration of enzymes than most grains and is also more economical to produce.

Two-row barley produces an average of 25 to 30 grains and comes in two rows of kernels. They are also larger in size and present a more uniform appearance compared to six-row barley.

Six-row barley produces an average of 25 to 60 grains and has more rows of kernels, as the name implies. Compared to two-row, they’re much thinner in size and present a less uniform appearance.

Winter types are useful in protecting the soil during winter months.

The most significant advantage of using winter types is that it produces higher yields along with higher extract content and better malt modification. Although these have lower protein content.

How Does Malt Affect Beer?

The biggest component of malt is sugar, also known as maltose, which can influence your beer profile. Specifically, there are 3 ways that barley malt can affect your beer:

During the fermentation process, yeast needs to feast on sugar to release carbon dioxide and creates alcohol as a by-product.

Without it, your beer would simply be bland to taste. The barley used can affect your beer’s profile, but not as much as the sugar structure.

The malt structure includes the structure of the sugars inside your malt, which defines the color, flavor, and aroma of your beer.

Flavor and aroma are two beer profiles that are usually determined during the kilning process, which makes a big difference to the final yield.

If you take your germinated malts, leave them undried and place them directly into the kiln, this will cause the sugars in the malts to liquefy and caramelize.

Caramelization would require heating your grain to a temperature as high as 220 degrees Fahrenheit. This breaks down the starch in the cereal grains or barley in this case, and is converted into sugar.

The result of the malts is usually referred to as caramel or crystal malts.

Crystal malts product a flavor and aroma similar to toffee, buttery, dark fruit, or even raisin-like.

If you dried your malts and placed them into the kiln, this would toast your malts. This is also known as Maillard reaction.

The Maillard reaction is the reason why roasted malts produce caramel, toasty flavors.

If you subject the dried kernels to even higher temperatures between 420 and 480 degrees Fahrenheit, this will combine Maillard and caramelization, resulting in roasted malts.

Maillard and caramelization reactions can affect the color of your beer. Longer heating times result in a darker color, while shorter heating times produce lighter shades. This, however, is barely scratching the surface.

The color that malt produces for beer is measured in degrees Lovibond. Lovibond is a company that manufactures color measurement equipment.

We also refer to a table that gives us the SRM and ERC numerical ratings, which can be found anywhere online. SRM is short for the American Society of Brewing Chemists Standard Reference Method.

ERC is short for European Brewing Convention. These two represent the numerical rating standards to measuring how light or dark beer color is.

There’s a lot of science involved here, so usually, we rely on the machine and table or chart to give a better and less technical guide on measuring beer color.

A general rule of thumb with ERC and SRM ratings is, the lower the rating/number, the more light-colored your beer. 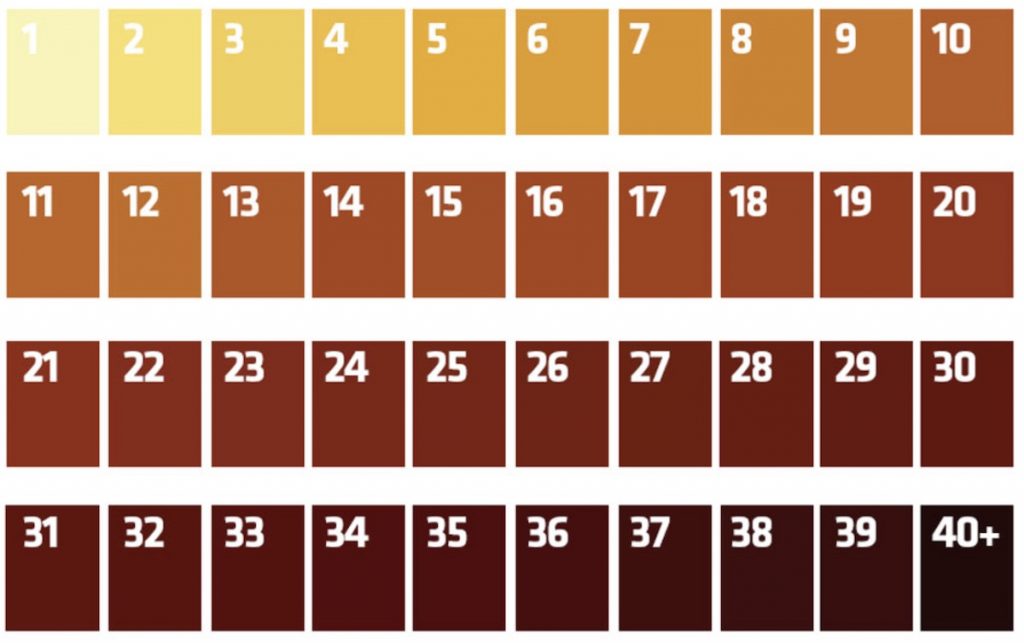 You’ll be amazed at the wide varieties there are around the world. You can use the different types of malts mentioned here as a guide to your homebrewing process.

Pilsner or lager malt is the most common beer style and has the most lager production. They’re also lighter and produce less flavor than standard malts.

Due to their pale and delicate flavor, this makes them perfect for clean lagers and pale ales.

Pale ales are the standard for most ale production and have lower protein content and are darker than a Pilsner. a small perc

Because Pale ales are killed at higher temperatures, this results in a toastier flavor.

Malted Rye isn’t as common as other standard malts; however, it’s spicy rye flavor adds distinction to the malt and is gaining popularity among brewers.

Specialty malts undergo a unique process and produce little enzymatic power; however, they provide unique characteristics to your beer’s profile.

We can classify specialty malts as either crystal/caramel malt, roasted malt, and dark malt. 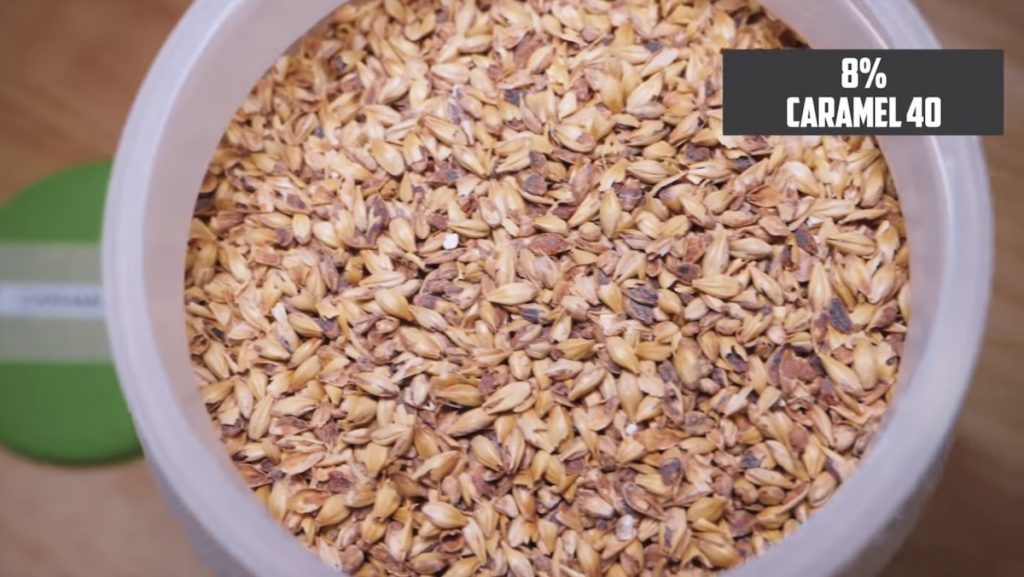 These are produced by finishing toasted base standard malts for a certain period or through increasing curing temperatures.

Munich malt gives off a nutty and malty flavor and aroma. This amber-colored beer can also be used with a base malt for mashing.

Fun Fact: Munich is typically used during Oktober-fest along with pale ales.

Vienna malt is lighter and sweeter than a Munich, and its colors can range from light amber to deep orange. In addition, it’s a primary ingredient used to make Bock beers.

This lightly roasted malt is a dark amber-colored brew that produces a flavor similar to bread and biscuits. Compared to a Vienna, Biscuit malt is much more intense in flavor.

Victory is similar to your biscuit malt; however, it produces a more nutty flavor. In addition, Victory malt adds orange highlights and also adds more flavor and aroma to porters, ales, and dark lagers.

For this reason, Black Patent malt is useful for contributing color or limiting sweetness for other beer styles that utilize a lot of caramel malt.

From the name itself, one can expect this malt to have a flavor similar to chocolate. Although, it’s somewhat bittersweet and comes with a roast character too.

Chocolate malt is useful for brown ales, porters, and stouts.

Amber malt is similar to biscuit malt; however, they’re less dry and have more flavor complexity in the nutty, toffee, and baked bread department.

Roast barley isn’t categorized as a malt and is simply roasted barley. Its distinct dry flavor is what provides the signature flavor of Stouts as well.

Caramel malts go through a unique stewing process after it’s malted, which crystallizes the sugars. When these sugars are caramelized, it produces a more malty, sweet, and caramel-like flavor.

These are placed in the kiln with high-moisture and low-temperature conditions that produces a glassy appearance.

More importantly, Special Glassy malts are used as boosters to add more body to the brew, maintain your beer’s head, or sweeten your final product.

Believe it or not, barley malt carries a ton of benefits from heart health to better digestion you would have probably never guessed to be true.

Since we associate barley malt with alcohol, we sometimes forget it’s a cereal grain too. After all, cereal grains do have the benefits of reducing heart disease, cancer, diverticular disease, and diabetes.

With malted barley, here are 5 benefits it offers your body:

As a result of regulating cholesterol levels better, this also promotes better heart health. Some studies even suggested that barley can reduce fat and waist circumference; however, more research is needed for confirmation.

Antinutrients are responsible for slower digestion and nutrient absorption. The process of malting reduces the antinutrients, which also increases the digestibility of cereal grain.

Combining the process of malting and fermentation also improves the digestibility of protein.

Malt contains a component called hordenine. This compound is known to generate mood-stimulating effects, especially if you consume it through beer.

Hordenine also activates a dopamine receptor found in the brain that stimulates a better mood.

Now that you understand the concepts around malt from colors, flavor & aroma, its process, and varieties, you’re ready to release the inner maltist inside you.

Don’t forget the benefits that come with it too. Of course, that also means in moderation.

We hope you enjoyed this article and learned a little something new today, Happy Brew Day!