As history has proven time and time again, dark beers have been around for a really long time, Porters and Stouts usually take the price when novice beer drinkers begin to think about the wide color spectrum of beers.

The one that hardly is ever mentioned is the classic German style Schwarzbier. In an attempt to offer up more variety of dark beers, I present to you the Schwarzbier.

Schwarzbier, which translates to “black beer” in German, may be the oldest continuously brewed beer style throughout the world. Evidence points to archaeologists finding a Celtic tomb a few miles from Kulmbach in northern Bavaria back in 1935. In this tomb a drinking vessel with remains from a black beer and bits of baked bread, which was used in fermenting at the time. This tomb was about 3,000 years old (800 BC), which makes it the oldest evidence of brewing in Europe.

The logical conclusion here is that the area of Kulmbach, which still brews Swarzbier today, was the birthplace of the style. It was not until 1174 that documented evidence surfaced about beer brewing that existed in the Kulbach area. This would prove Kulmbach being the oldest active brewing epicenter in the world. Of course, historians would point to the Middle East as being the oldest. However, the rise of Islam hindered the continuous brewing that took place there.

The first actual documentation of Schwarzbier as a style began in 1390 from Braunschweig (Brunswick). At the same time, Thuringia and Northern Bavaria were brewing a style very close to a Schwarzbier. Both beers were brewed with ale yeast, as lager yeast did not start until the 16th century.

Those Monks at it Again

Kulmbach was also the place where monks first brewed Kulmbacher Kloster Mönchshof Schwarzbier, which literally translates to “black beer from the monks.” American craft brewers are taking on the tradition of brewing ‘black beers.”

Characteristics of the Style

Noble hop aroma with malt sweetness derived from the Munich malt. Malt aroma is of bread crust or toast. Some other aromas include: caramel, nuts, and toffee. No diacetyl or fruity esters should be present.

A firm mouthfeel and medium full body is due to the high presence of unfermentable. Some astringency and low alcohol warming. Medium carbonation.

The Munich malt really shines here. Rich in melanoidins similar to bread crust. Some chocolate, nuttiness, caramel, and toast adds to the complexity of this beer. Beer should not have any roast characteristics and not dominated by caramel. Hop bitterness should be low, but noticeable. The malt presence should be at the forefront. No fruity esters or diacetyl. Dry finish will usually lead to hop bitterness at the backend.

When it comes to recipe development for a Schwarzbier, Munich malt, Pilsner malt, and some specialty malts is really all you need. Now the real question is the proportions that you regulate to each malt.

If you are more of a traditionalist, Munich malt will be the leading malt in your recipe. You can include Munich malt as 100% of your grist down to 20-30% at the low end. Pilsner malt and specialty malts will make up the rest of the grist, with only 10% making up the recipe for specialty malts.

In recipe development, this is the time when you begin to ask what flavor a brewer wants from their beer. Munich gives a beer a very recognizable nutty and toasty character and also allows for a bittersweet background. Pilsner malt offers the dry crispness that you expect from a lager. Of course, if you want to showcase the crispness of the beer, Pilsner malt will take the lead here.

As was mentioned earlier, about 10% of the grist should be made up with specialty grains. To obtain a light caramel character and light chocolate malt, use only a small portion of each. CaraMunich malt is always a good choice here.

Since this is indeed a black beer, the color must arrive from specialty malt. There needs to be a bit of caution raised here as not all dark malts are created equal. Since you want more dark color and no roast character, Weyermann’s Carafa I, II, or III. This is a dehusked black malt that imparts the color you want without the roastiness that Black Patent malt will have.

Like many Pilsners, hop bitterness should be present in a Schwarzbier. However, the hop bitterness should not dominate the beer. As with most German beers, German noble hops with soft aroma, mild flavor, and medium bitterness. Terrnang and Hallertau work great here. If you want to change up your hops a little, an American hop with German pedigrees such as LIberty hops can be considered. A hop addition at the beginning of the boil is appropriate and a late addition towards the end of the boil will give some nice aroma to the beer.

A clean fermenting German Lager yeast should be chosen for your Schwarzbier. No matter what yeast is used, a two month lagering process is recommended. Here’s the list of yeast to choose from: 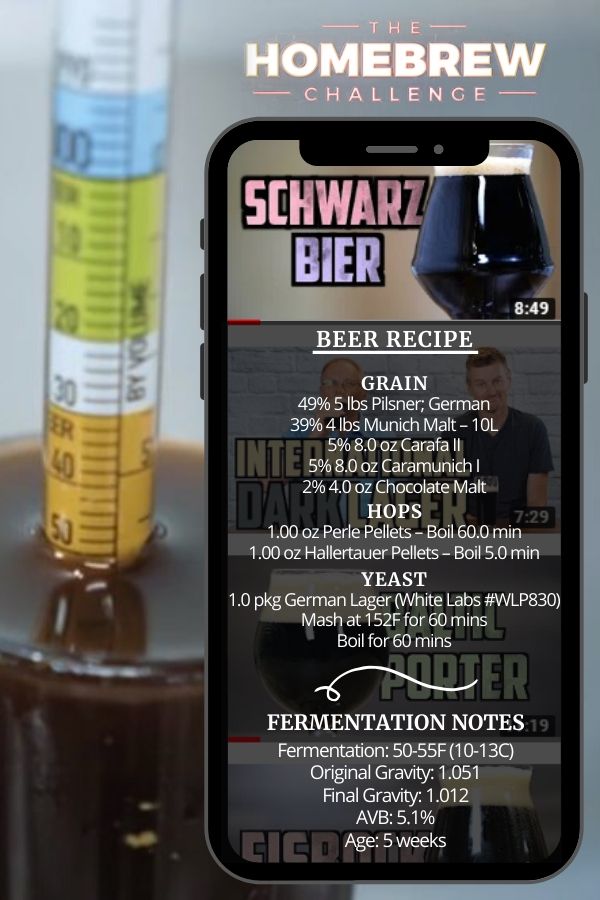 Schwarzbier is German and black lager and it’s a beer of contradictions. By appearance, It looks like something that’s deeply roasty and perhaps a little bitter. By taste, It’s got that clean German lager taste. I’m going to brew one of those up. Plus it’s time for some DIY improvements. I’m going to drill some holes in my Keezer.

Hi, I’m Martin Kean and I’m taking the Homebrew challenge to brew 99 beer styles and I have made it into the dark German beer category. So let’s get straight into it. What is in this beer? Well, I have all of the ingredients crushed up here, smelling delicious. The base malts for this is a combination of German Pilsner malt and dark Munich malt or Munich 10. So I have five pounds of German pills, the molt and four pounds of Munich malt. 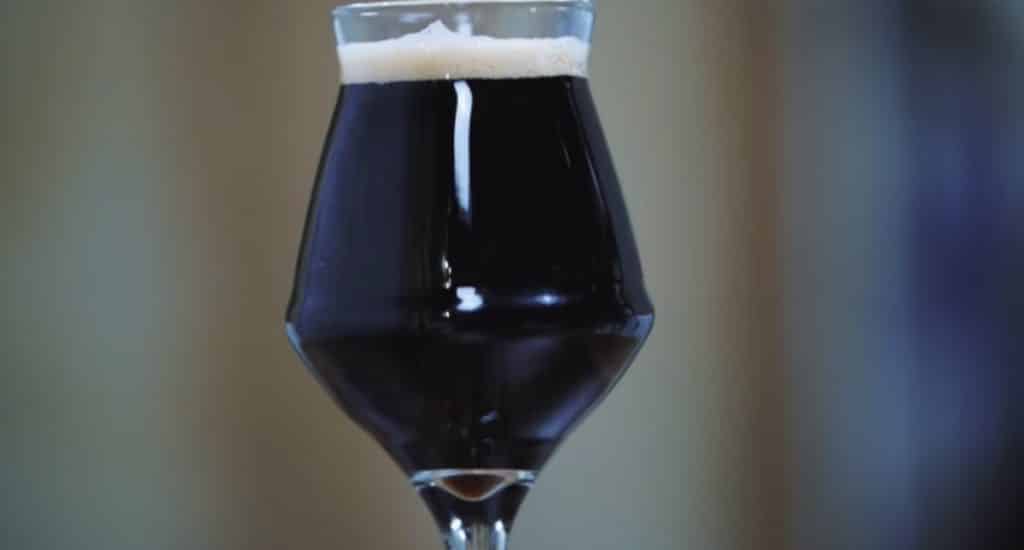 Then for specialty grains, well I’m adding in eight ounces of Caramunich I. The thing is so far none of this is going to get me a very black lager and we can go pretty dark with this. We can go up to an SRM of 30 and I’m going to push it as close to that as I can. So to get that color, I am adding in Carafa II – eight ounces of that. And I think eight ounces is the most Carafa who I’ve added to any beer so far. And I’m adding in four ounces of deep dark roasty chocolate malt. 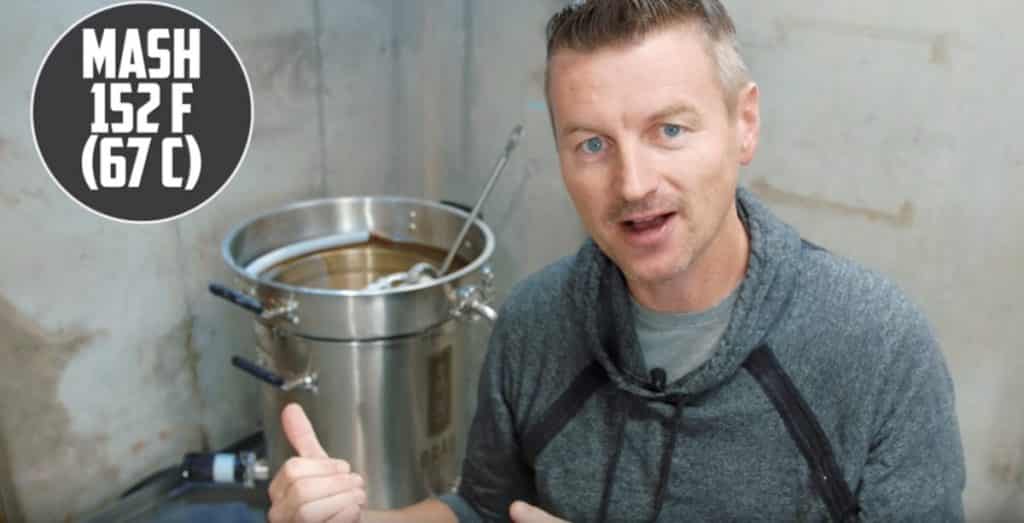 Mashing in at one 152 Fahrenheit. I’m looking to get to a pre boil gravity of 10 54 for a beer that will be about 5.1%. That should be about 60 minutes of mashing or however long it takes me to run my errands and get back to the basement.

mash is done. I’m draining down to the boil kettle. So now’s a good time to think about hops. Now this beer has a lot of multi sweetness in it right now. We’ve got all of that German pilsner malt and the Munich malt as well. And we want to actually balance that out with a bit of hoppiness to get to an IBU of about 28. So the way I’m going to do that is I’m going to add Perle hops. One ounce of those at 60 minutes as my bittering hop. And then right at the end I’m bringing out the ??? and I have one ounce of that which I’ll put in with five minutes to go. So this week I’ve been making some changes to my Keezer, my chest freezer where I keep my kegs. Now I’ve been brewing quite a lot of beer recently you may have noticed and I’ve been running out of space where to keep the kegs and keep them cold.

Now the keg system that I have right now has room for four kegs plus two gas canisters, one for CO2 and one for nitrogen. Plus a four way regulator for the CO2. What I wanted to do was to upgrade that so that I had room for six kegs in the keezer instead of four. And to do that, I have taken out the CO2 and nitrogen canisters and put them on the outside of the chest freezer.

So what this boils down to is that I need to drill holes in the collar of my keezer to enable the gas lines to run in and out. Now these are the parts that I’m using to do that. I have to of everything because I’m doing this for two lines for a CO2 line and a nitrogen line. I’ve got two bulkhead fittings, I have swivel nuts, and then I have some clamps to connect to the tubing to that bulkhead. So what this means is I need to drill a couple of holes in me keezer!

So this is the setup. I’ve got my six kegs in the Keezer now along with my four way CO2 regulator, and then coming out here, I’ve got my two gas lines, one going to a CO2 canister and the other going to a nitro canister. There just out here sat on the floor. Now I’m no longer chilling them because I really didn’t need to do that.

And in fact it’s much easier just to be able to look at the regulators here and see what pressure everything is set to then when they were stuck in this Keezer. Now, I did this about a week ago. So far, no problems whatsoever. No leaks. So really happy. The only thing is I’ve got six kegs in here chilling now, but I’ve only got four beer taps…. 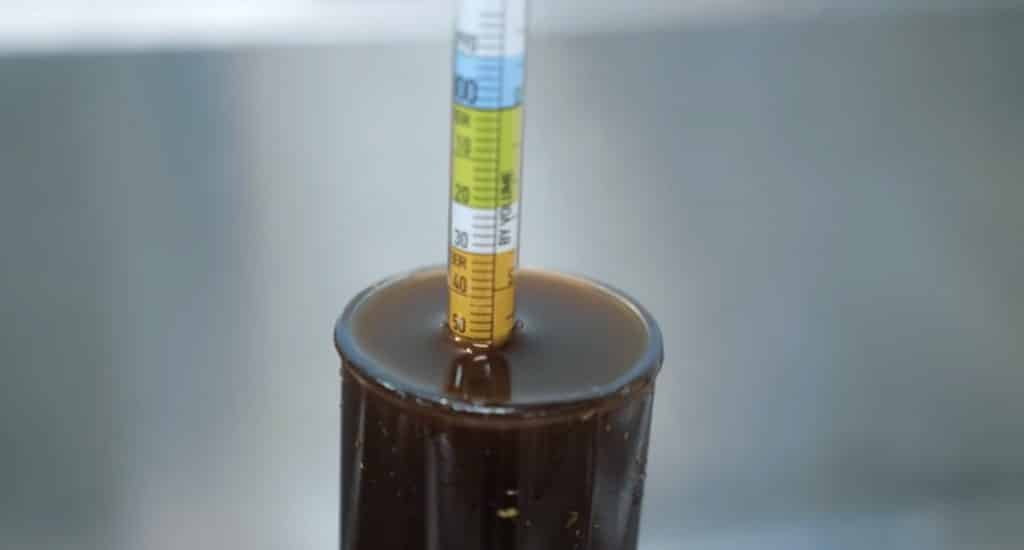 Gravity for this beer has indeed come out at 10 51. Before it can add the yeast, I need to chill this down to 50 Fahrenheit. I got pretty close to there. Actually. I did make it into the fifties, but I have just moved a bit into my chest freezer where it is chilling. When it does reach 50, that’s when I will add my yeast. This is W L P eight 30 German lager yeast.

Here we are. We’re going to do the tasting. I’m Lauren and I’m here obviously with Martin and we’re gonna try this beer.

Yeah. So I’ve got, uh, another dark beer for you. I see that. Yeah. This one, this one came out at um, 10, 12 for gravity, 5.1% beer and it is a Schwarzbier beer, which is German for black lager, which you could probably tell from the appearance. Right. This is quite dark. Yeah. Aroma. Like I said, like it doesn’t smell Stouty it’s more of like a malty smell.

Yeah, I would agree. Very malty. Um, no, no sort of notable hop aroma. Okay, let’s go with the taste. Okay. Like the last one, I’m pleasantly surprised because, because of the look of it, I would never like go and get this at the bar. I would never buy this at the store just because of the color it is. But it is like very light. It’s kinda dry at the same time, but like it has those, um, the yeasty comments, comments, that’s not right. The yeasty notes, the kind of sticks on your palette. 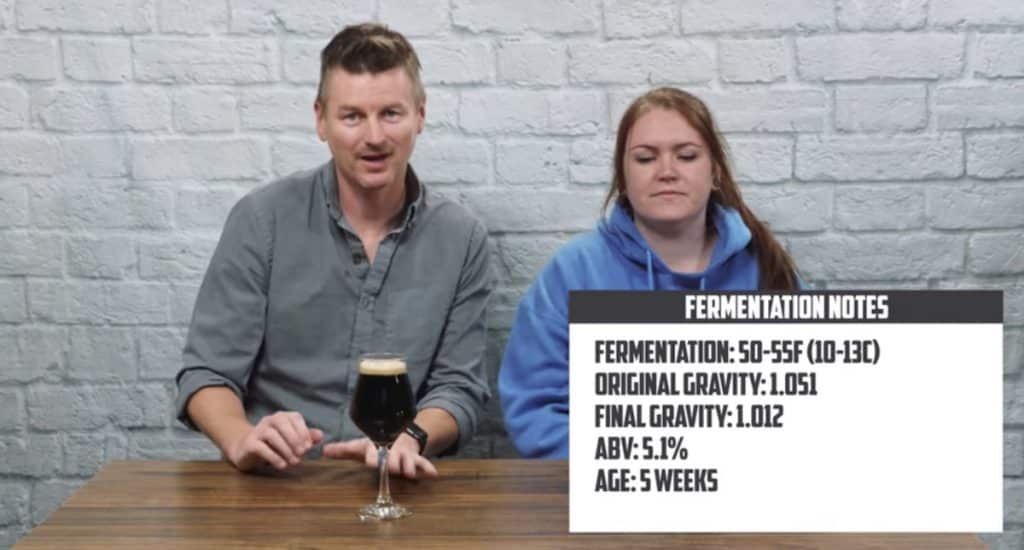 Well, you’re getting good at this. I mean, I would agree with all those things. It’s, it’s dry. It is definitely not a sweet beer. I think the last beer was definitely had a sweet taste to it. No, no sweetness to it. Very malty, uh, no sort of burnt flavor, coffee flavor, nothing like that. Uh, clean tasting, easy to drink, light bodied, I think despite its appearance.