I’m not sure this is a good idea. I’ve been brewing every week and I’m always looking at ways to shorten my brew day. And well, I just sort of had this thought and that was, would it be possible to complete a brew day in one hour from putting water in my kettle here all the way through to putting the beer in my fermentation chamber?

And if that was possible well with the baby, any good, you know what let’s find out. So here we go. I have got a iPad here with a timer to keep me honest.

Can you brew beer in 1 hour?

Transcript: The first task is to get 3.7 gallons of water into this kettle. I’m brewing a two and a half gallon batch and get it heated up to mash temperature. So let’s start the timer go for it.

Alright, so I’ve got a water filter here and I am going to get some water in here. Now. Now one thing that I’m doing here is I’m using the hot water tap, which I don’t normally do. Uh, I don’t really want to use water. That’s been sat in my, my, uh, heating tank normally, but this will save me a good amount of time to get up to mash temperature by using four more to start with now, the heating element is submerged with water. So I’ve turned it on. I’m going to get this to about 160 degrees.

Mash temperature today is intended to be 152 Fahrenheit, and you can see, this is really climbing I’m just approaching 130F already. I’m just going to give it another minute and then put the grains in.

Which right here, I haven’t mentioned what beer and brewing yet, but this is a British bitter. Just over five minutes gone and I’m just approaching mash temperature. Now I am going to just cut this off and get the mush going right now.

Now I’ve tried to give myself a fighting chance of pulling this off, and I’ve got a couple of things that really worked to my advantage. First of all, I’m only brewing a two and a half gallon batch. Normally I would brew five gallon batches quite frequently, uh, two and a half gallons just means there’s less water overall. That takes less time than to bring up to mash temperature and to boil. And it also means it’ll take a little bit less time to cool down as well. These are all super important things today. Uh, the other thing that works in my advantage is this claw hammer supply system has a 240 volt heating element. So it’s able to move the temperature up really, really quickly, which again is very important to me. 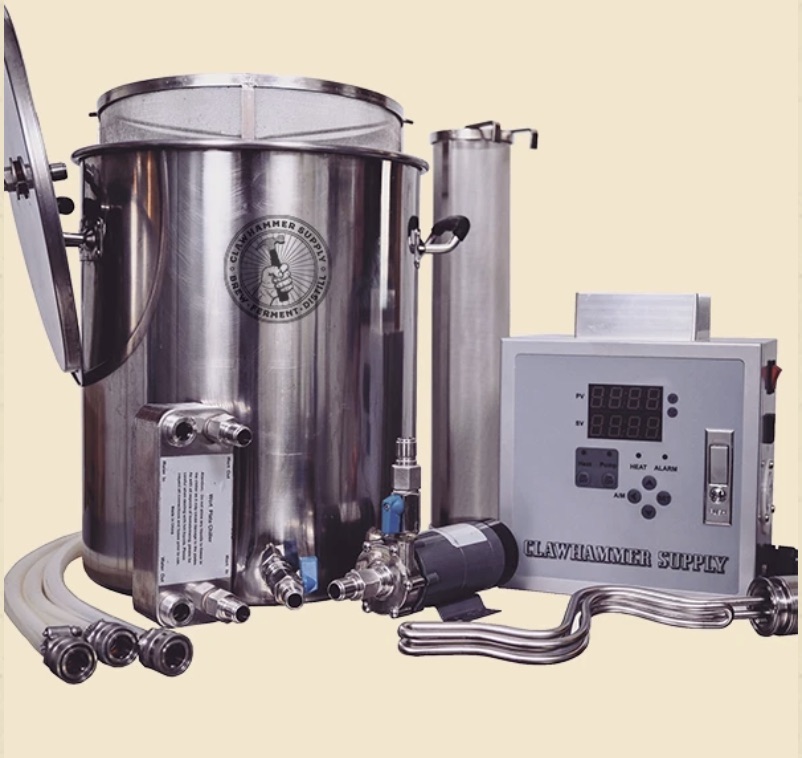 This is a single vessel, turn-key, all grain, digital brewing system. Integrated stainless steel grain and hop baskets can be removed after each process. This allows mashing, boiling, hop additions, etc. to be done in the same kettle. 304SS + 5500W too.

Now in terms of ingredients for this beer, I have 68% Maris Otter as my main base malt and then 18% American Touro. Then I have 9% victory molt just to add a little bit more biscuit character to the beer and 7% of caramel or crystal 80. And then finally, I’ve got 2% of pale chocolate malts, which I really like in my best bitters.

Now I’m just going to do a really quick mash out where I’m going to bring this mash temperature up to 168 Fahrenheit just for a couple of minutes. Let’s get that going now. All right. That’s it for the mash. I’m going to take the greens out now and start boil, and we are boiling. So I’ve got 30 minutes in right now. I’m going to add my first hop edition, which is frugal hops. I have one ounce of that. And with the second hop addition,

That is with 10 minutes left in the ball to go. I have added half an ounce of EKG which is Kent Golding hops. I’m looking for this beer to come out with an IBU of about 28.

Now, one of the challenges of this of course is to get this stuff cool quick. So I’m going to use my plate chiller from claw hammer supply to do that. And we’ve yeah, about two minutes left in the boil. Now what I’m going to do is just start recirculating the hot water through the plate chiller to sanitize it, right? That’s it that’s been my 20 minute boil is turn it off, turn off that heat and get some cold water running. And now we have the race against time for this to be cool enough for me to add my yeast.

Speaking of the yeast that I’m using, well, I have 1728. This is Scottish ale yeast. Of course, it’s 75 degrees. It’s slightly warmer than I’d like, but it’s not bad. In with the yeast. Beer goes in the fermentation chamber where it will sit at 68 Fahrenheit. And that is a one hour brew day.

Now the beer came in with an original gravity here of a 1.040, which means I’ve got about 50% efficiency in that super short mash. But the question is, how’s it going to turn out?

I made beer! I actually made beer at home and I’ve got Lauren here with me to try this one. So Lauren, this is a 60 minute beer was made in entirely in 60 minutes from filling the kettle with water through to putting in a fermenter.

It’s been about two weeks since brew day now, and we’re ready to give this a taste. Now, the first thing to say is the bit fully attenuated, which I wasn’t sure it was going to do with such a short mash came down to 1.008, So four point something 4% percent beer. Um, so that’s a good start now. Let’s see what you actually think of the beer. So, first of all, um, I should tell you what the beer style is. You might not know that this is a Best Bitter.

Okay. So we’ve had these before. Um, let’s see what you think about the color for this one. All right. It’s quite light, um, kind of caramel-y color. Yeah.

And these beer generally doesn’t have an awful lot of aroma. We may just get something off of the aroma hop that was added, but not really getting, getting much that jumps out at me. I need to try it. Well, that’s no, that’s do it.

Let’s try this beer. I have to say, I am very pleased with how this has turned out. Yeah. That’s pretty plesent. Yeah. It’s, it’s um, got a lot of the characteristics I look for and the best bittter and I’ve brewed quite a few of these, but this one it’s got that kind of malty sweetness, very smooth taste to it. I think there’s a really nice little taste at the back of this as well. A very sort of smooth finish to this beer, which honestly would make me think that it’s been brewed with a lot of care attention and time, which it wasn’t. Yeah, it definitely has the style tastes to it. For sure. I mean, I wouldn’t know it only took 60 minutes to do it at all.

I think this is an experiment that has actually turned out to be quite successful and, uh, kind of quite enjoy finishing off this keg for sure. You better beat me to it. Alright. Cheers.