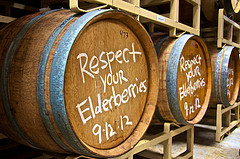 Wood aging isn’t new. It’s what was used to ferment, age, and transport beer before there was anything better, like stainless steel.

But that doesn’t mean breweries aren’t innovating with wood.

Not content with simply “wood-aging” beer, craft breweries are experimenting with new creations made with this ancient technique. We’ll look at some of the different methods that are being used in today’s beers, along with examples.

When we say wood-aged, we’re usually talking about barrel-aged, although that’s not always the case as I’ll show in a couple of examples below. Oak barrels can lend all sorts of interesting flavors to the beer: char, toast, vanilla, caramel.

A brewer has all sorts of options when deciding what types of barrels to use:

One very important factor is whether the resulting beer will be sour or not. Non-sour, or “clean beers” are usually aged in barrels to extract the oak and/or the character of whatever liquid previously resided there. They want to keep souring microbes out. Whiskey barrels are a good choice for clean beers because the whiskey will have killed off any bugs residing in the barrels.

By sour beers, I mean beers that are intentionally inoculated with bacteria and/or wild yeast such as brettanomyces. Sour beer producers may use barrels for a couple of reasons. Like clean beer brewers, they may want to pull the wine/spirit flavor out of the barrel, in which case they’ll need to use fresh barrels. But oftentimes they only use barrels as a way to store their microbes. The porous barrels provide a cozy home for the bugs which build up their populations over time. For this reason you’ll see many sour beer producers buying barrels from clean beer producers – they only want the wood, not whatever beverage the wood previously stored.

Now here are some examples for you to try.

Whiskey barrels are without a doubt the most popular choice for aging. With the right beer in them they can balance flavors and make a whole greater than the sum of its parts. Higher alcohol, malt-forward beers are the best candidates whiskey barrel-aging.

Whiskey barrels are also a smart choice from a marketing perspective if the whiskey is a brand name, like Maker’s Mark.

One of my examples is Breckenridge’s Well Built ESB which is aged in Colorado whiskey barrels from Stranahan’s (conveniently, one of my favorite whiskeys). Stranahans is made from 100% malt – the impact on the beer is debatable but it does feel more authentic combing two all-malt beverages. American single malt whiskeys are not very common but they are on the rise and I’m sure beers aged in their barrels will be as well.

Since bourbon is so popular in America it’s the most common form of whiskey barrel aging. The most famous bourbon aged beer has to be Goose Island’s Bourbon County Stout, aged in Heaven Hill barrels. Bourbon is made (by law) with at least 51% corn, so it is going to lend different flavors than a single malt whiskey.

Finally there is the less common rye whiskey barrel aged beer. The heavy dose (at least 51%) of rye lends a spicier character to the spirit and beer. One commercial example is the Rittenhouse Rye from FiftyFifty’s successful Eclipse series.

When brewers want to brew a big, clean (not sour) beer they often turn to whiskey barrels. Imperial stouts and barleywines are the most common but more unusual choices like ESBs and porters are popping up too.

The only cedar aged beer I’ve had is Cigar City’s cedar aged Jai Alai. I found it much too spicy and pungent, but some age would have probably tamed it. As I mentioned above, wood ≠ barrel, and this is one of those cases where that’s true. Cedar blanks are used in the fermenter.

For another example, it looks like Jester King makes a cedar aged beer – I would love to try it.

Oak aged could mean a few different things. You come across many beers that are “Oak-aged” and what this usually means is that oak chips or cubes are used to impart flavor on the beer. The chips are added to a stainless steel fermenter, so you can’t call these beers barrel-aged. Some people look down their nose at beers aged in this manner because it is not traditional. I think this is overblown. It can be done right or it can be done wrong. Oak Aged Yeti is aged with oak chips and is a fantastic beer.

If a barrel has been reused a few times by a brewer it might be called oak-aged because it’s not pulling any other flavors out, but more often than not it’s referred to as barrel-aged. Barrels can also be scraped and reconditioned in order to get more oak flavor.

I’m not aware of many beers aged in new oak. It’s a very powerful flavor and would overwhelm the beer. It sure sounds like Cigar City’s Hunahpu’s Imperial Stout – Virgin Oak Barrel Aged was aged in fresh oak, and the reviews seem to confirm that.

Give Cigar City credit for being very experimental with wood aging.

Tequila is a newer form of beer aging. As you can imagine, it is catching on South of the border. The Mexican brewery Cucapá had a tequila barrel aged barleywine and the Guadalajara-based Minerva Brewery makes an Imperial Tequila Ale.

An American example is Golden Road’s El Hefe Anejo out of Los Angeles. I tried it at The Great American Beer Festival and was pleasantly surprised how at well the agave flavors mingled with the beer and were not too dominant.

Rum is another uncommon one but you will find examples here and there. Maybe it’s because I live in Colorado, but I can’t think of rum barrel aged beer without immediately thinking of Avery’s Rumpkin – a huge pumpkin beer aged in Gosling’s rum barrels for six months.

These are spirits made from distilling wine. They have a sticky sweetness that carries over to the barrel and eventually to any beer that occupies it. There are a handful of beers aged in these barrels, the most famous likely being The Lost Abbey Angel’s Share.

Crooked Stave makes a brandy and cognac aged version of their Nightmare on Brett. I’ve been fortunate enough to try both. I’m not sure where the Cognac barrels come from but Chad Yakobson said in an interview with Embrace the Funk that the brandy barrels are from Heaven Hill distillery.

Wine barrels tend to be more popular with sour beer producers because they have a more neutral flavor compared to say, whiskey barrels. Wine barrels are also frequently reused unlike American whiskey barrels which the law requires to be fresh for each batch. That means the impact of the oak is more diminished in wine barrels.

French oak and American oak are both used for wine and hence sour beer aging. French oak appears more popular because it is more porous than American oak, but it’s not without its drawbacks.

Says Russian River’s Vinnie Cilurzo to Brew Your Own magazine,

“There is a belief among brewers that French oak is better because it is more porous, so the bugs and critters can stay impregnated in the oak longer and more easily. This may be true, but it will also aid in the barrel more easily picking up Acetobacter over time — this is something that I don’t like.”

Speaking of Vinnie, one of my all time favorite beers is Russian River’s Consecration, aged in Cabernet Sauvignon American oak barrels. RR is fond of wine barrels and contrary to some sour brewers who only want the barrels for bug storage, RR wants to pull the wine flavor into some of its beer, like Supplication with its distinct Pinot Noir flavors.

Although wine barrels are more common for sour beers like Consecration, you will find a few used for clean beers. Here in Denver, River North Brewery makes a beautiful version of their White Ale (Witbier) that is aged in Chardonnay barrels. It’s a good example of using the right barrel for the beer.

I linked to the beers on Untappd so you could add them to your wish list. Add them, drink them, and tell me what you think.

I’m not going to pretend that wood aging makes a beer better in all circumstances – it doesn’t. There are plenty of barrel aged beers I’ve tried that would have been better off in stainless. But wood can add some interesting flavors and it’s worth seeking these out.

What are some of your favorite wood/barrel aged beers?