An Added Insurance: Yeast starters are one of the biggest insurances a homebrewer can do to help their beer.

The homebrew experts tend to say that a wort that is over 1.070 starting gravity, a starter is best to include with their brew day. Starters should be made at least 24 hours prior to pitching the yeast.

I have never been too big on making starters for every batch of beer I brew. I am usually brewing beers with starting gravities of 1.070 and lower.

On the rare occasion that I am brewing up a Russian Imperial Stout or Belgian Quad, I have taken the extra insurance of making a starter.

I do see the benefit of making a starter when your starting gravity shoots closer to 1.070 or higher. However, I do not make it a habit to make my own yeast starter for beers with a gravity lower than 1.070. 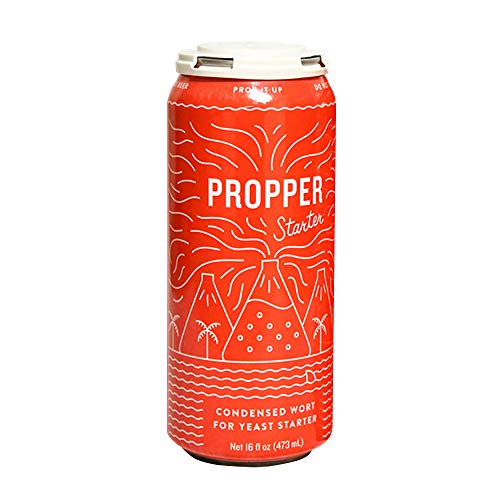 I took on a small barrel project amongst some friends recently. Our goal was to fill our 30 gallon Koval Bourbon Barrel one last time with a clean beer. By “Clean Beer,” I mean a beer that is not soured.

Since this will be the fourth beer that has graced this barrel, we are thinking It will be soon time to funk it up a bit. We foresee of nice Flanders Red in this barrel’s future. For the last clean beer, we collectively decided on an Imperial Rye Brown Ale. My love for Rye malt appears again.

Trying to Save a Lost Style

While walking around my local homebrew shop, Chicago Brew Werks, I came across a new product. Propper is a yeast starter in a can produced by the folks over at Omega Yeast. They have locations in St. Louis and Chicago. These guys have been holding it down in the yeast scene since 2014.

A traditional yeast starter is fairly simple. You measure out your dry malt extract (DME), mix it with some filtered water, and you bring it to a boil. After bringing your wort to a boil, you immediately begin to cool it down. After cooling, pour wort in a sanitized flask and pitch your yeast. Simple right?

Omega has taken the cooling part out of the equation. No more having to wait for your wort to boil and then cool. With the Propper Starter, just mix a can with some reverse osmosis, distilled or purified water.

Omega does say if you decide to use purified water, you will need to boil it and then cool it. To keep it simple and avoid the boiling and cooling, I strongly suggest just going out to the store and buying reverse osmosis or distilled water.

Prepping for my Brew Day

Brewing this Imperial Rye Brown Ale was my focus since we wanted to fill this barrel, as I mentioned earlier. After measuring out and crushing my grain, my focus was on my starter. I gathered all of my things I needed to make a starter.

Some of the things I needed for this small project.

Some more stuff that is needed.

The directions on the can indicate:

Since I do not have a stir plate, I just swirled the growlers whenever I walk past them in my kitchen. I wrapped the top of my growlers with some sanitized foil. Overall, I found this process to be so much easier than making a traditional yeast starter.

I would definitely use Propper Starter the next time I brew a big beer.