What color do you want your beer in? You may not notice it as much – simply because you’re either buying beers in cans or bottles that make it hard to identify the colors inside, but every drink looks a bit different.

You could love your favorite beer for many reasons, whether it be the brand, the taste, the uniqueness or the alcohol content. However, the other thing that makes beer different from other beverages is its range when it comes to colors. Beer can have an endless array of colors.

Ranging from the deep copper of Pale ale to a white, foamy Irish Stout, there is an infinite range of colors that beers can have. However, you will be surprised to know that there is a scale that enables us to estimate the color of a beer brew.

The Standard Reference Method (SRM) is a color grading system used extensively by brewers to predict the color of the final malt.

This method uses the SRM color value, multiplied by 12.7 times the log of the reduction in amplitude experienced by the light of a wavelength of 430 nanometers in passing through a cuvette of 1cm.  Simple huh?

The factor of 12.7 was chosen in the early 1950s as this value was very close to the already existing Loviband method of estimating color, which was prevalent at that time.

Now, our eyes are one of the five senses in our body, and being the visual creatures that we are, we often have first impressions, based upon the looks of a particular commodity. Therefore, beer brewers need to set the right tone, with their beer color, to leave an excellent first impression.

Even though both the systems result in similar and sometimes identical predictions, the SRM method has been proven to be better, only because it uses the technologies of spectrometers and other such modern equipment.

Before the advent of the SRM scale to predict and estimate the color of the beer, the Lovibond system, developed by JW Lovinund in the late 1800s, was used. It made use of colored slides, which were compared to beer to determine an approximate value. This method was prevalent throughout the 1900s and is even today used to describe the color of some grain beers.

However, the Lovibond System had some fundamental limitations. Firstly, the scale was dependent on an individual’s very own perception and could differ from person to person.

Secondly, the spectrometer technology was developed in the late 1950s. Therefore the entire system shifted to the newly made SRM (Standard Reference Method), which made use of the Spectrometer techniques.

The color of the beer as per the SRM is measured in a cuvette. A cuvette is a transparent glass material usually used to carry out spectrometer related works. Now, measure half a cup in a glass cuvette. This cuvette is then measured by a spectrophotometer, which emits light of wavelength 430 nm. The SRM color inference is almost 10x the amount that has been absorbed, a reason it is measured on a logarithmic scale.

As discussed, the Lovibond method, despite its limitations, gives values similar to the modern SRM. The other parallel process, the EBC or the European Brewing Convention, is also measured at the same light wavelength but in a much smaller cuvette of 1 cm.

Practically, the EBC color is approximately 1.97 times the color of the SRM

You do not have to worry if you do not have a personal laboratory, you can opt for other alternate tools such as a beer reference color card. 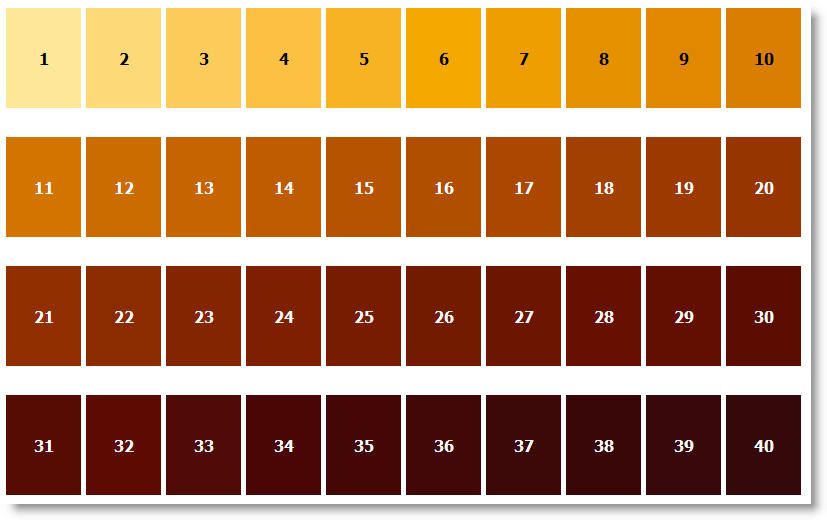 A perfect example of a beer reference card is the Davidson Guide. It is a visual comparison between the beer and other standard reference colors.

As a brewer, it is essential to determine the color of the beer. To calculate and estimate this color more precisely.

An early iteration at estimating beer color involved only calculating the Malt Color Units (MCUs) of a method.

The above method helps calculate the color of the brew according to the SRM standard. However, the disparity in the estimate increases drastically as the color exceeds 6 SRM. This usually happens because the amount of light absorbed is a logarithmic function and not a linear function.

Therefore, to calculate and predict the color for beer up to 50 SRM, we can go for the Morey equation, which states that

Despite the popularity and precision of the color estimation process of SRM, some limitations need to be addressed.

The first major limitation of the process is that it measures the color of the beer from the absorbance of a single wavelength of light.

A perfect example to testify to the above is that the subdued hues of red and brown look similar at the light of 430 nm used.

We often build our first impressions based upon the perceived look and the visual the subject in question offers. All brewers need to be aware of the color of their brew.

Keep darkening factors like caramelization in check as you boil the brew. Coupled with the element of aging, it can result in a darker shade if you aren’t careful.

Even though most of these problems are not monumental, and do not require any special immediate attention, it can still be tried by homebrewers to enhance their beer drinking experience.