How to Ditch Your Gas Brewery for Electric (without electrocuting yourself)

Are you are a master electrician? Do you understand all of the ins and outs of capacitors, potentiometers, and ground wires?

Most importantly, are your skills so good that you’d be willing to touch a stainless steel kettle filled with 10-gallons of hot wort after wiring it up? No?

I began exploring electric brewing about 3-years ago. I have brewed almost exclusively that way ever since.

Like a lot of brewers, my brewing setup evolved as my interest in the hobby grew. I started with a small pot and grew to a 20-gallon 3-tier setup. I thought the 3-tier setup would be the fulfillment of a dream.

It was great except the 2-hours spent every brewday schlepping equipment out of my basement and shed. With a young family and a demanding job, something had to give.

I either needed to resign myself to brewing 4 or 5 times a year or I needed a new method. I wanted the ability to brew (and clean) in place to avoid all of the wasted setup and breakdown time. I needed to move my brewing indoors.

Without a way to vent carbon monoxide from my basement, electric brewing was the only option. I started my eBrewing exploration by reading online resources. There is a whole subculture of homebrewers devoted to electric brewing. I found Electric Brewery.com among the most thorough, albeit mostly above my head and ability.

As a novice electrician, I became concerned about the warnings that accompanied many of the builds. As I fruitlessly tried to make sense of instructions and wiring diagrams, I quickly accepted that I didn’t have the knowledge necessary to safely build my own system.

What I did learn piqued my interest. After all, electric brewing has a lot of advantages.

With propane burners, a lot of heat is lost to the air. With electric brewing, the heat source is submerged in the wort or heating only the parts of your kettle directly touching the burner (true for induction burners, more on that later).

The small amount of energy loss makes it much for efficient.

Many homebrewers have a temperature controller for their keezer, kegerator or fermentation chamber. I personally own two Inkbird controllers and a Johnson temp controller.

With eBrewing, you can repurpose these gadgets to precisely control your mash temp. They are inexpensive and easy to acquire.

Induction heats very evenly across the surface of the kettle. There is much less chance of caramelizing your wort, creating hot spots or heating unevenly during the mash.

These problems are pretty common with gas.

This is one of my favorite things about eBrewing. There are few things worse than running out of gas during a brew session or making that last minute run to get a full tank.

If you are really into your carbon footprint or really want the cheapest price per therm, electric is less expensive than propane.

If you have solar panels, then you could brew carbon neutral.

I was close to giving up on my eBrewing project when I discovered High Gravity Brewing’s eBIAB a bag setup. This changed my mind about what I thought I wanted.

With a system like this, I could brew in my basement whenever the opportunity presented itself.

By this point, I had too much invested in my equipment to buy a turnkey system. With the High Gravity system as inspiration, I set out to build an electric system with these guidelines:

I already owned a pre-wired bucket heater. I previously used the bucket heater for preheating my cooler mashtun. Even though I decided to use this option, I wasn’t comfortable with it. Quite a few brewers use bucket heaters. I have never been convinced of their safety.

First, bucket heater manufacturers stipulate the use of their equipment for water only. Second, they are not manufactured with food grade materials. Who knows if they are safe for water, but not for something more acidic?

I knew I wanted a better option, but all I found were water heater elements that required electrical skills I did not possess. I began researching induction burners as an alternative heat source.

They use magnets to produce heat. Plus, they are efficient and do not produce ambient heat (like a normal electric stove burner). Induction works by heating the metal via magnets.

An induction burner only heats ferrous metals. The parts of the burner not in contact with the kettle don’t get very hot. It is not a general heat source like a gas flame or common electric kitchen burner. If you can stick a magnet to your kettle, you can use an induction burner.

They do not work for aluminum kettles. Induction burner pricing varies widely from about $40 to $1000+. The commercials versions are typically overkill for a homebrewer, i.e. you won’t be brewing 8 hours a day 6 days a week.

However, a nice commercial burner will be more powerful, especially if it runs on 240v.I eventually bought this induction Burner.

There are a few other electric cooktop options available that work great for homebrewing as well, but for the price, this one works the best for brewing. 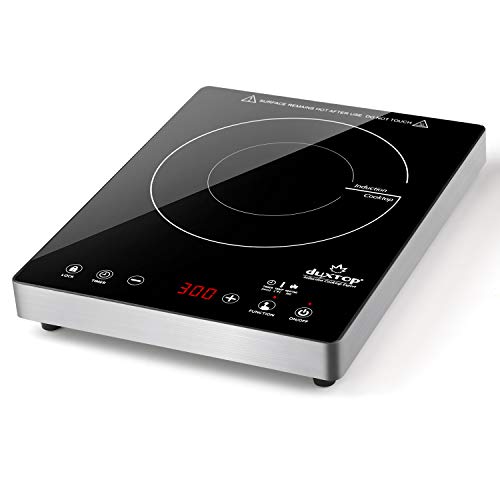 After adding an induction burner, I was ready for my first brew. Initially, I hoped that the induction burner would be powerful enough to meet my needs, but it was not the case.

It takes forever to heat strike water and for wort to come to boil. I added the bucket heater to provide the necessary BTUs to get my brew session moving.

Advantages of induction burners for brewing

Many induction burners have temperature control settings. I was losing too much heat during my mash. Adding insulation and keeping the induction burner 140F kept my mash temp was very stable.

Other advantages of induction burners are easy cleanup since wort wipes right off with a little water and safety features that turn off the burner when there is no liquid present.

My first brew session was a disappointment. Brewing took too long. The water took too long to heat up. And the heat stick in the wort made me nervous. In some ways, it took me back (and not in a good way) to when I first started brewing on the kitchen stove.

The good news is that setup and teardown took about 25-mins. I also enjoyed the fact that while I was waiting, I could walk 10-steps and watch TV or listen to music.

It was nice knowing that if I couldn’t clean my equipment right away, it wouldn’t be sitting in my backyard where it could be damaged or stolen. I hadn’t anticipated how great cleaning equipment in place would be.

Since everything is confined to my basement, I clean by re-circulating PBW at near boiling temps through the entire system. It’s amazing how much junk comes out of my plate chiller and valves.

After brewing a few times, I knew I was on the right track, but I wasn’t satisfied. I began researching alternatives.

Given my constraints, I figured I had a few options:

Just about this time, Homebrew Stuff came to the rescue.

It fit all of the criteria:

This prototype consisted of the new element installed near the bottom of my kettle (underneath the false bottom) and the 1800W induction burner. I

run both heating sources on separate circuits to keep from blowing a fuse.

I also added a GFCI adapter for additional protection.

The new element turned out to be the missing piece. Even at 120V (1500W), the element is powerful and efficient. I found the new setup to be comparable time-wise to my outdoor 100,000 BTU propane burner.

My water heated so quickly that I overshot my mash temp. It took a few brews to get things dialed in. After a few brews, I added a temp controller to make life easier.

It is easy to set my strike water temp and let it heat while I mill grain and get other things ready. Typically, my strike water is at the correct temp when I am done with my other brewday tasks. A temp controller also makes step-mashing and mash-out (without overshooting my target temperature) easy.

Recirculating or stirring the mash is necessary to prevent hot spots. Given the size of the heating element, I had to remove my bazooka screen.

I was initially worried about hop trub, but between a hop spider and a false bottom I haven’t had any issues. With the addition of the element, the induction burner and the temperature controller, I had a system that was reasonably priced, easy to use, but with minimal electrical work.

There are some variations on this build worth considering:

I love brewing indoors. There are many advantages. The biggest plus for me is being able to brew whenever I have free time. Everything is ready to go at a moment’s notice.

I find eBrewing to be more precise. It makes it easier to reproduce beers that I really like. Minimizing my setup time makes my brew day more enjoyable.

Most of the time I brew at night which doesn’t conflict with family life. Opposition to brewing has dropped to near zero with my wife and kids. Brewing more with less hassle, and better reproducibility. It doesn’t get much better.