The last I checked my calendar it was only September. I am sure you were all thinking that when you saw the title, Homebrew Advent Calendar. It’s okay, I totally understand. Let me explain.

For those unfamiliar to the Advent Calendars. Wikipedia’s description is as follows:

“Advent calendar is a special calendar used to count the days of Advent in anticipation of Christmas. Since the date of the First Sunday of Advent varies, falling between November 27 and December 3 inclusive, many Advent calendars, especially those that are reusable, often begin on December 1, although those that are produced for a specific year often include the last few days of November that are part of the liturgical season The Advent calendar was first used by German Lutherans in the 19th and 20th centuries.”

For homebrewers, we acknowledge this by drinking one of the twenty-four beer leading up to Christmas. For the first time ever two years ago, I decided to orchestrate a Homebrew Advent Calendar with five other members of my homebrew club, Plainfield Ale and Lager Enthusiasts. 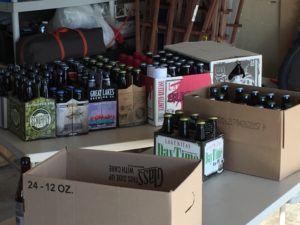 The original plan back in early September, I believe, was to get people involved in this and have people commit to brewing four different beers to contribute to the Homebrew Advent Calendar. By having a total of six of us and each of us contributing four six packs of beer, this would allow everyone involved to have a different beer for the 24 days of Advent.

After the first year, word traveled fast. We doubled our size of participants from six to twelve. This year’s numbers are the same as last year on the first day of the announcement alone.

It is very important to give homebrewers enough time to think about what they want to contribute, make the beer, and then package their beer. This is why I am talking about Homebrew Advent Calendars at the beginning of September.

Modifications were needed for some, including myself. Instead of only contributing homebrew beer, commercial beer was allowed as part of our beer provisions. This is perfectly fine. Sometimes life gets in the way, infections pop up, or time just simply gets away from us. Besides, who doesn’t enjoy a little Celebration Ale from Sierra Nevada.

The next part is where all the work for me began. When I say work, I am talking about being in my garage, drinking a New Belgium Accumulation, and placing bottles of beer into boxes. I know, hard work indeed.

I worked out a system where I would begin in one corner of each box and proceed to place one bottle of beer per contributor vertically. Looking at the box horizontally, each contributor’s beers were represented with six days in between them. 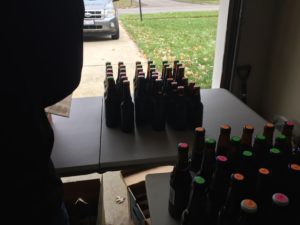 One important note should be included about the type of beers and where I placed them in the box. All IPAs or otherwise hoppy beers were placed within the first few days of the calendar. This would allow for the hops not to fade over time. I also tried to orchestrate the bigger, barrel aged beers closer to the end of this monthly beer exchange. I figured it would be a nice treat to have a big beer the closer to Christmas.

The next step would be to place stickers on each bottle or can with a number from 1-24. The numbers represented each day in Advent. The final step was to retreat to my computer and type up a document that indicated which beer from which homebrewer. This allowed everyone to know what exactly the others were contributing, even if they did not provide their own label for  their beers, which was not a requirement.

I set a firm deadline for when all the beer needed to be in my possession. Since this was a lengthy project, I would send out reminder messages to participants. Also, many of us would talk about what we were brewing in months and days prior to the deadline. 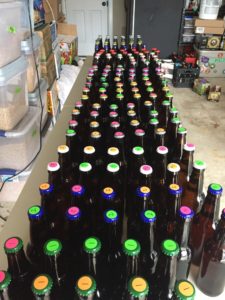 A row of bottles as far as the eye can see.

We all gathered on December 1st and had some beers at Werk Force Brewery and we exchanged our beers later on in the parking lot. This allowed us to have enough time to chill our beer for that evening’s consumption.

Rather organically, a consistent thread of messages followed when we tried each other’s beer. We gave each other feedback on the beer. The brewer will sometimes add incidental information about their beer. This just reminds me of the community of brewers is strong.

In closing, if you haven’t started a Homebrew Advent Calendar; try it this year. It’s not too late. It really is not a lot of work to organize. It’s a lot of fun and allows brewers to try different beers each night.