I love beer, you love beer. But have you ever took a step back and thought:

When did people start drinking beer? Why are there so many different styles?

Take your beer experience to the next level by reading about it: beer books! In this article, I’ve hand-picked a list of the best beer books.

Grab your favorite beer and let’s get to it. The Beer Bible by Jeff Alworth

Jeff Alworth is a beer writer and expert from the West Coast, where the American craft beer movement started.

The Beer Bible talks about beer history, alchemy, and variety. Are there other types of craft beer you haven’t heard of? What exactly is a lager? How do you read a Belgian label?

All of these questions are answered in this award-winning book, along with fun illustrations. It’s a must-read for both beginners and beer experts.

If you enjoy his writing style, Jeff Alworth has written other books, too. He is the author of The Secrets of Master Brewers, Beer Tasting Quick Reference Guide, and many other books. If there’s a Michael Jackson for music, there’s one in the beer world, too. For beer aficionados, chances are you’ve heard about the author and his books.

Published in 1997, this beer book is an oldie but a goodie. This book discusses how beer is made, how to choose, and how to evaluate beer.

Jackson writes about the different breweries and towns around the world, discussing their tradition and culture. Honestly, this beer book will make you want to jump into a plane.

This book includes colored pictures and illustrations to provide the reader with vivid details. It makes a great coffee book table, too. As the title suggests, The Complete Beer Course walks you through a series of chapters (entitled “classes”). It’s a crash course to understand, learn, and appreciate beer.

Plus, learn how to start your own beer cellar, pairing food with beer, and beer tasting! Just like wine, learn how to break down the fine tastes of each brew.

Josh Bernstein is a writer and journalist based in Brooklyn. He also has regular appearances on different media, including Bon Appétit, The New York Times, Wine Enthusiast, and Draft. This is a must-read for a beer lover who wants to have a deeper understanding and appreciation for the drink. It tells you how to really taste beers and pair them with food.

Randy Mosher tackles the ingredients and brewing methods that affect the quality and taste of various brews. You’ll learn to recognize the scent, flavors, and colors of various beer styles.

Besides tasting, you get to learn about the history, science, production, and storage of beer. In the updated second edition, this beer book covers topics such as craft beer trends, draft beer systems, and so on.

This book is technical enough to help you pass the Cicerone exam (basically, the equivalent of a wine sommelier). But it’s also a great read if you’re a good ol’ beer fan. The World Atlas of Beer by Tim Webb and Stephen Beaumont

Tim Webb is a beer writer and was a board member of the Campaign for Real Ale (CAMRA). Stephen Beaumont seeks breweries and distilleries and acts as a consultant for restaurants and hotels.

This book is a collection of their experience. Dive into the field of international beer with this book, which covers more than 35 countries.

It starts from the United States, then to Europe, and then Asia. Learn about international brews, such as Belgian Trappist ales, Bavarian wheat beers, Vietnamese bìa hoi, and much more.

This comprehensive guide contains photos, maps, illustrations, and charts to give you information about more than 500 breweries across the world! How to Brew clearly teaches the beginner how to get started with extract, moves them though to extract and specialty grains, then shows them how to upgrade to all-grain brewing.

How To Brew: Everything You Need To Know To Brew Beer Right The First Time by John Palmer

This book is the ultimate beer-making book. It provides easy, step-by-step instructions on how to become a home brewer.

Palmer introduces his “top five priorities” to make great beer. Plus, you get to learn what the different equipment and ingredients are involved in craft brewing.

This is a textbook-style guide to beer-making containing graphs, charts, and equations. So it’s suitable if you’re a beginner, or if you’re a seasoned homebrewer that needs a refresher course.

The older versions provide you with quick, easy information in less than 350 pages.

For those who want a more comprehensive guide, the newer edition contains additional chapters on malting, beer kits, and beer flavors. This is a fun choice, especially if you want to know more about beer without the block of text. We all know and love beer, but how did it develop over the years?

The Comic Book Story of Beer tells you exactly that. From the Dark Ages to American Pale Ale, you’ll learn about the history of beer in this fully-colored, illustrated graphic novel.

Plus, you’ll get to see how beer had a role in religion, politics, agriculture, chemistry, and plenty of other fields. It’s a vivid glimpse into how people enjoyed beer during their time. 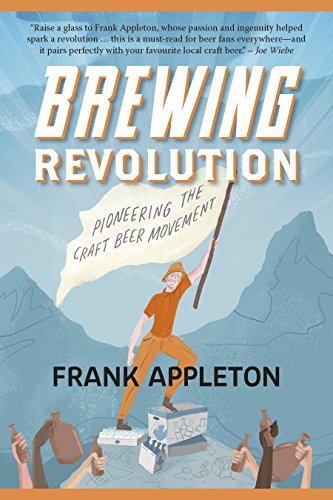 Brewing Revolution is an inspiring memoir of Frank Appleton, the brewmaster who started the craft beer movement in Canada.

This book recounts the bleak reality of the Canadian brewing industry 50 years ago and what Appleton did about it.

It shows you the humble beginnings of his passion for craft beer, where he started brewing in his home in British Columbia. Eventually, this sparked the revolution of craft breweries and brewpubs all over Canada and the US.

This is a great read for those who love craft beer. If you want to get into craft brewing and setting up your own place, this memoir gives you plenty of insights on it, too. The Oxford Companion To Beer by Garrett Oliver

The Oxford Companion contains over 1,100 beer entries. It’s written by Garrett Oliver, a James Beard Award Winner and brewmaster at the Brooklyn Brewery.

This compilation features 166 beer experts as contributors from over 24 countries. It tackles beer-related terms, techniques, traditions, and so on.

It also provides cultural entries to see the relationship of beer with games, food, and drinking trends from all over the world. You’ll see sneak-peeks into drinking traditions in Mexico, Japan, Brazil, etc.

This dictionary-slash-encyclopedia is a great addition to the shelf for beer lovers, but also for restaurants, distilleries, chefs, lecturers, and many more. Do you love traveling? Do you love beer? If you’ve answered yes, this book is for you. It’s a curated list of must-tries from all over the world.

Featuring over 65 countries, The Bucket List: Beer tells you all the best breweries, tours, festivals, and beer museums.

It includes all the beer-famous countries, such as Germany and Ireland. But also some obscure destinations, such as North Korea and Guam.

Use it as a travel guide for your next getaway. Or learn facts about beer styles, drinking traditions, food and beer pairings, etc. with the illustration and photos.

Well, there you have it! My recommendations contain all kinds of beer books.

Whether you want to learn about the history or culture, how to brew your own beer, get inspired to travel, you’ll find something for you on the list.

For my homebrewing crew, here’s the best books on hombrewing that have remained on my shelf all these years.