How to Brew Pineapple Tepache | The Bru Sho

Never throw your pineapple peels away again. I’m going to show you how to make a delicious fermented pineapple beverage with just three ingredients you probably have in your kitchen right now.

I’m Trent mucho and you’re watching the Bru Sho. Stick around and learn how you can make this tasty Tepache at home.

Tepache is a fermented pineapple beverage that originates from Mexico. It’s usually made from the peel of pineapples. And it’s sweetened with either Piloncillo or Brown sugar and seasoned with cinnamon sticks or cloves.

This is a perfect recipe for somebody who’s never brewed or made fermented items before. It’s pretty foolproof. You don’t need specialized equipment and you only need three ingredients to get started.

Tepache is a great drink on its own, as it has 2 to 3% alcohol and a ton of probiotics that are great for your gut health. It’s also a great mixed with a little bit of beer or as a mixer in a cocktail. I’m going to show you one of my favorites at the end of this video, but now let’s get into the recipe.

For this recipe. I’m making one gallon of Tepache and I’m using this fermenting jar, but feel free to use whatever you have. A pitcher would be great for this or a large Mason jar, or if you have a fermentation bucket, that would be great too.

First thing, you’re going to need a whole pineapple for this recipe. We’re only going to be using the peels. This is a zero waste recipe, which is why this is such a good drink to learn how to make. Start by cutting off the top of the pineapple.

You know, you can actually save the top of the pineapple and plant it and it’ll grow into a new pineapple? It’s as easy as sticking in some dirt and giving it some water. And with a little luck, you’ll see some new growth out of the center of the plant.

Next slice off the peel from around the perimeter of the pineapple and save the pineapple to eat later. I don’t like to use the core cause it can cause some bitterness. So I usually just toss that in my compost.

Next we add the Piloncillo. Piloncillo is unrefined cane sugar, and it’s usually formed into a small cone like this. You can find it at most grocery stores, but if you can’t, you can just use Brown sugar, about one cup.

Now we add the spices. I’m going to be using cinnamon sticks, but you can also use cloves. Tossing the pineapple sugar and spices. Top up with water and shake it up.

Don’t worry. If the Piloncillo doesn’t dissolve completely, it will dissolve in a few hours. Now just cover your fermentor with a kitchen towel or a napkin and a rubber band to secure it. This allows CO2 to escape and nothing gets it in.

Set it somewhere. That’s room temperature and out of direct light for about three to five days. No yeast is needed because there’s microorganisms all over the peel that act is our yeast and the sugar from the Piloncillo feeds those yeasts to create alcohol and probiotics.

Occasionally you might see some foam. If you want, you can scoop it out, but it won’t hurt anything.

I like to taste after four days. It’s a perfect balance of sweet and funky. So now it’s time to bottle.

Here I’m bottling a half batch recipe that I made earlier this week. If you fermented in a bucket, then you can just use the spicket at the bottom to fill your bottles.

But for pitchers and other containers, you need to strain out the rines and spices. Once you’ve done that, you can carefully pour into the bottles. I recommend using either swing top bottles or these kombucha bottles. 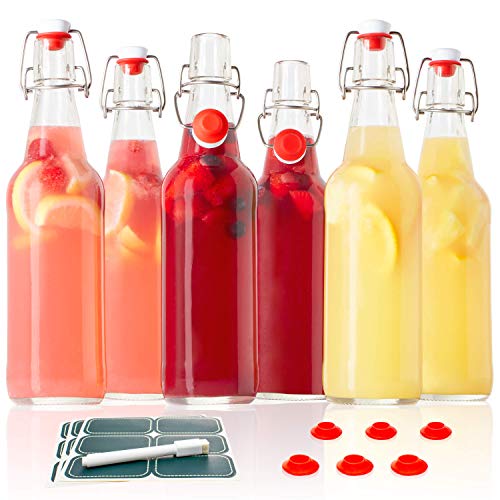 Kombucha bottles are my favorite because you can see the pressure on the cap and feel if it’s firm, letting you know your bottles are ready to drink.

If I ever buy kombucha, I just save the bottle so I can reuse them. You can also use bottles and caps if you have that equipment.

After you kept them, let them sit for one to two weeks on the counter. This will give the remaining yeast and sugar time to ferment a little more and make carbonation. After one or two weeks, pop them in the fridge for a few hours, and then it’s ready to drink.

This Tepache has taken on a gorgeous golden yellow heel. When I take a sip, I first tasted sour pineapple flavor that is refreshing, tart, and juicy. And I get a slight funkiness that you might get from kombucha or other probiotic drinks.

Then at the end, I taste those warm spices from the cinnamon that make this a perfect drink as we start to head into fall. As I mentioned, this is pretty low alcohol. So if you want an extra kick, here’s a quick cocktail recipe.

What sounds better with Tepache than tequila? Start with one ounce tequila, pour in your Tepache and give it a squeeze of lime. Then I garnish with a lime wedge and enjoy.

If you never brewed beer, cider, or wine, you have to give this a try. It couldn’t be an easier way to start your home brewing adventure.

Let me know what other kinds of fermats you want to see me make and be sure to subscribe for more recipes and tutorials.