All beers are an amalgamation of numerous different flavors, each brewed and formulated in different ways. Beer is pretty similar to music, as one man’ gold can be another man’ garbage. You may find a particular beer to absolutely delicious, and your buddies may find it absolutely atrocious. Each of us has different flavor preferences and different sensitivities to different flavors. With that said, there are a set of characters which are a big NO for all.

Some of these “Off flavors” are inherent in almost all beers though in controlled and desirable proportions.

To identify these off-flavors, you need both experience and time. With this list, we try to concise all the learnings you will ever need to recognize, control, and eliminate these off-flavors. 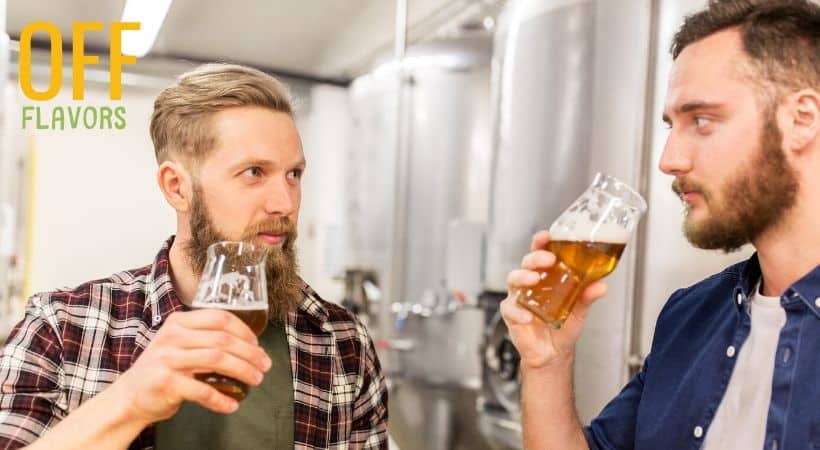 How To Control These Off Flavors?

The primary step is to identify the very cause of the off-flavor in question.

Flavors, especially those which result in contamination, are a big NO. These are caused by a lack of sanitation and inferior brewing methods.

Off flavors that are not caused by contamination are results of discrepancies in the brewing process. These include uncontrolled temperatures during the fermentation process, poor technique, choosing a wrong yeast and weak boils.

As mentioned, it is essential to identify the source to eradicate these flavors. Therefore, we suggest some of the most commonly found characteristics, their origin, and how to avoid them.

Some of the off-flavors and ways to avoid them are –

Effect of Aging: The milky taste intensifies over time as heat accelerates its breakdown process.

Caused By: Caused by short boiling at lower temperatures or mutated yeast. This usually happens during the fermentation process. The existence of some kind of Bacteria can also give rise to this.

Tastes Like: Drain-like, sulphury, or rotting garbage. This compound is also used to make natural gas odorous. And no one wants to taste natural gas while enjoying their beer.

Effect of Aging: This contamination also increases with time, thus increasing the properties of smelling like rotting garbage.

Caused By: Mercaptan is often a by-product of yeast-autolysis.

Tastes Like: Sulfury, Skunky, sunstruck. It can be mistaken as Mercapton but is less offensive than Mercaptan.

Effect of Aging: The results get subdued over time. However, if kept in darkness, there are chances of

Caused By: Lightstruck is usually caused due to a chemical reaction between artificial light and daylight.

Control Methods: While buying commercial beer, always opt for brown bottles. Always ensure not to keep the bottles in darkness.

Importance: Very minute quantities give freshness to beer, which can change to an off-flavor very soon.

Effect of Aging: Its effects can increase during the maturation period.

Caused By: Yeast strains are known to provide a small amount of hydrogen Sulfide during fermentation. Other causes include bacterial infections and autolysis.

How To Practice it?

The addition of Sodium Metabisulfite can reduce the formation of h2s due to yeast strains. One can go for sodium metabisulfite tablets. Dissolve one Campden to an ounce of beer to see visible changes

Importance: Caprylic is an essential ingredient in many matured lagers

You will find it as a popular ingredient in long matured lagers and lambics.

Caused By: These amino acids are a result of the yeast metabolism process during the fermentation. The production of this compound increases as pH increases

Importance: Always considered as an off-flavor in beer.

Caused By: Generally caused by bacterial infections in sugar syrups, during sour mashes, when packaged.

As discussed earlier, the taste is something that can be very subjective, and what may be a lip-smacking beer for someone may be heard flushed down the toilet. With that said, these off-flavors, which more or less are undesirable by all, must be avoided at all costs.

As we can observe, these off-flavors are caused by two primary reasons. The first one lacks proper sanitation, a reason you need to take care of all sanitation and cleanliness standards while going through the process.

The second primary reason is the lack of implementation of the brewing process. A lot of brewers often find themselves turning on the heat a little late, not giving the beer enough stand time, and small factors like these can spoil an entire batch of beer. Being thorough in your brewing process is important.