Kveik Yeast Explained: Behind the Magic

Transcript: Hello, welcome to the video in this video, we were looking further at Kveik yeast, provide a greater understanding for all. And when I say all, I really do mean all.

This guide is designed to give key information for those that have never used Kveik all the way through to people that already have some experience with it and are really trying to understand how it works.

I’ve conducted extensive research informing this guide that included speaking about all of the points raised in this video with a number of the most respected people in the Kveik scene across Norway. So let’s begin.

So firstly, you may be wondering “what is Kveik?” Kveik is actually an old Norwegian word. That simply means “yeast.” However, when it’s used in today’s context, it means a farmhouse yeast that is usually from Norway, but there were also other versions of Kveik from Lithuania, Latvia, and further afield still, as you can see on this map.

So if you are new to this, your probably wondering what all the fuss is about? So, okay. I will tell you now. Firstly, the fermentation time for Kveik is usually between one to three days, but unlike a turbo yeast, it does not result in harsh off flavors. No, it actually tastes really great, really quickly.

Also do not be fooled by thinking that this is just a yeast you can use for farmhouse beer styles, because actually there are many different varieties of Kveik that are suitable for a wide and varied amount of different beer styles.

You can expect regular strength, alcohol beer styles to be ready much faster than this though. I find that many are ready to drink as soon as you add carbonation. The main thing that changes over the coming two to four weeks is how clean they taste, not to say that they ever taste dirty though. Hopefully you understand what I mean?

Another question that comes up is who is actually using Kveik then?

Who is actually using Kveik?

The answer here in short is more and more people as time goes on, the commercial brewing scene has been exploding with Kveik fermented beers from all over the world. As you can see from this brief selection, there is a great deal of different commercial beers being released, covering all manner of styles that are all being fermented with Kveik.

There is also a huge, rapid expanding brewing scene for Kveik including the home brewing community of the world that is expanding at a rapid rate also. In short, Kveik is a real buzzword and that buzz is building.

Another commonly asked question relates to the amount of different types of this yeast that are available? There are currently 54 different strains of Kveik and there is a registry for the strains that can be found online. I will link this registry in this video’s description. As you can see here, the registry details much about each type often including history and where it is available.

Okay. But it’s important to understand that the selection of these 54 strains does not actually end here. Now you need to decide precisely what type of Kveik to buy and where to buy it?

What type of Kveik yeast do I want to buy and where to buy it?

They’re all for the most part at this 2 versions.

Firstly, there are the commercial strains like those you see on screen. Now these are single strain versions known as isolates. They do not include any form of bacteria and are cleaned up and ready for commercial breweries who need to be careful in this manner. They can be bought from wholesalers and home brew stores themselves across the world. And today come in liquid form. 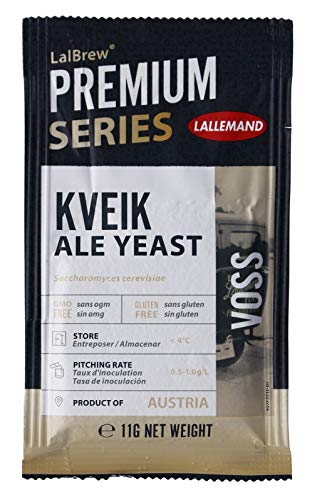 These were certainly give you a Kveik experience of sorts, but it is important to understand that technically they are cut down and processed versions of the real thing. It should also be pointed out that there’s a selection available in this form is quite restricted at this point.

However, that restriction is blown wide open if you look towards the farm versions, which is of course the actual original natural form and technically a real Kveik. This first one is very rarely just a single strain.

Naturally these strains have been selected to work well together. Some of these of course do contain bacteria, but I’ve never used one that has led to a sour style, but some have pretty funky. As long as you are cleaning properly, then this should not lead to any issues later on.

And in the years of using Kveik, I’ve not had a single issue and nor will you, if you play it safe and get your cleaning routines in order. It’s important to understand that it’s the farm version of Kveik that is really what the Kveik registery is all about. Even though you will find a little bit of information about the commercial isolate versions there too.

There is a key point of consideration here also when it comes to choosing between multi-strain originals versus isolates. And that is mutation.

Many brewers who use the full farm version of its many built-in strains actually reculture the Kveik themselves. I do this myself. What you will notice is over time, this use will change quite often, quite rapidly. This is because Kveik is multi-strain.

Let me explain with a quick example.

Imagine you have a Kveik that has three strains of yeast within it. When you first get it, the ratios of each strain are as follows. As you see on screen now. The Kveik formed this ratio due to how it has been used. Factors that come in here are things like temperature, humidity, pH of water, types of sugar that’s been used and more besides.

If your environment of brews are similar to what has been used before then, frankly, the changes you will experience will be minimal, but this is highly, highly unlikely. What is far more likely is that given a little time, the ratios and yeast strains themselves will change and mutate.

A shift over time like this from the original is more than possible. Even though this is a, just a mirror example. As you can see, this new ratio would probably change this Kveik’s contribution and profile on a fair scale.

Do keep in mind that this will continue to change as your brewing habits change in your brewing different styles and you reculture the Kveik from them.

The possibility for change is even more when you think about how this would shift and an eighth strain or even worse, a 10 strain Kveik. The more strains in a Kveik, the more noticeable the shifts will be from the original composition of the yeast. So what this basically means is that you could well have the farm version of a specific type of Kveik, and you could meet someone online who has exactly the same name Kveik, but they’re likely to be very different types of yeast, especially if they’ve come from different sources and different ages.

So when you see people asking for notes from farm Kveik, from other people online, then really they’ve misunderstood what they have here because given time, what you have is unique to you and your own brewing. Keep in mind also that some of this Kveik has been untouched and simply reculture for hundreds of years.

So in summary, for brewers who are looking for consistent results, this is obviously a problem of farm Kveik, but for some, it becomes part of the mystique and power of Kveik. What I would like in a perfect world is real multi strength, Kveik that is available in stores that I can rebuy when I want an original result and my own evolved versions also. Sadly, the former does not exist at this point.

Now this may not sound like much yeast and really it isn’t, but it is important to understand that real Kveik is an underpitch by normal standards.

CoKveik thrives from this level of pitching. It will not be as happy or healthy if you add any more. A general rule of thumb is the comparatives values, Kveik as a 60% pitch. You will find that the majority of farm Kveik will ferment out in between one to three days.

It has been observed by myself and others that if you leave this beer in the fermentor for about a week from start to finish, this gives the time to clean up after itself. And the end resulting bear has a nice head start. It is also rather convenient this way because you can keep brewing and transfer over the weekend.

Finally, let’s have a look at reculturing. I’ve gone into this in much more detail in other videos on this channel, but I will touch on it here. To obtain the most healthy yeast cells top cropping yeast is by far the best way you can go when you can. This is a simple process. As you can see here, the main thing to focus on is the cleanliness and sanitization side.

Once you have obtained the yeast, then it is popular to dry Kveik. This is commonly town on sanitary greaseproof paper. Once this is dried, it will crumble down like the dry yeast you’re used to seeing….

How to Bottle Kviek Ferment Beers

How to Harvest Kviek Yeast