Craft Malting is Ready for Prime Time. Here’s What You Should Know.

It was bound to happen. We have new & experimental hop varieties, small yeast suppliers, and now — craft maltsters. 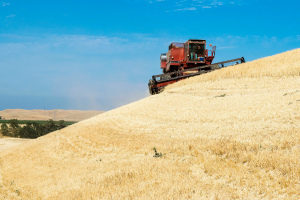 I recently read about Admiral Maltings in Northern California that is starting to get a craft malt house in full production. What’s really interesting about Admiral is that they also are going to build a brewpub to better highlight the grains that they are malting.

I reached out to the crew over at Admiral Maltings (very impressive resumes, see bios below) to answer a few of my questions about Craft and Micro malting.

1. What is Craft or Micro malting?

Admiral Maltings: Craft malting is small scale malting. In our case, it involves using locally grown barley and other grains that are malted for the Bay Area craft brewer. Size does matter. Rather than 1000 or 100-ton batches which require barley blending and produces the same product for everyone, we will be malting in 10-ton batches.  The small batch size allows us to individually tailor the recipes to the brewer’s taste. By malting on a small scale, we can keep the identity of farmer and field in the same batch, we can experiment with different varieties, and we can create different flavor profiles for different brewers. This allows for maximum creativity. 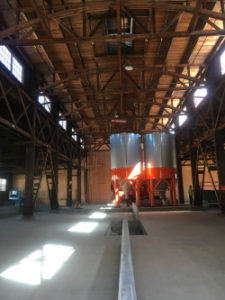 2. What are some of the advantages to using locally produced malts?

Admiral Maltings: Locally produced floor malt is fresher and more flavorful – the difference between fresh bread from the corner bakery and bread from a chain grocery store. It also supports the local economy. Farmers in the bay area can get premium prices for an agricultural product (malting quality barley) that does not need to be irrigated (although irrigation can be a great back up to no rain when barley most needs the hydration). Seed cleaners that clean and sort the grain harvested from the field get more business. Local transportation and grain storage companies get more work. The result is a far lower carbon footprint than growing grain on the plains of Canada, shipping it a thousand miles to be malted, and then shipping that thousands of miles more to the brewer.

3. What are some of the inherent differences between malt from a craft or micro producer and the large producers?

Admiral Maltings: Explained above. Also, we will be floor malting – using a traditional method but using modern control methods to ensure flavor consistency. Floor malting spreads the germinating malt out in thin layers for the malt to germinate. As it begins to germinate, the maltster gently turns the grains by hand. This method most closely replicates how barley germinates in nature and is highly prized by brewers. It is more expensive and labor intensive to make than mechanized malting in large batches. Additionally, we are focusing on sustainably farmed grains. All of our farmers are either certified organic or use no-till methods.  No-till, where the soil is not plowed and exposed, improves the health of the micro-biome in the soil, preserves soil moisture, eliminates erosion and acts as a huge carbon sink. Organic methods and no-till reduce the greenhouse gases that contribute to global warming. 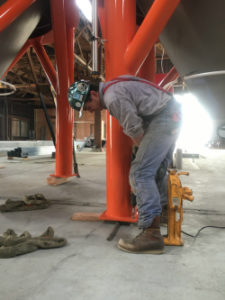 4. Buying local or at least closer to home is appealing to many people. What types of products do you plan on bringing to market?

Admiral Maltings: Initially, we will be producing base malts: pilsner, pale, Vienna and Munich styles. Within those broad categories, we hope to create more flavorful malt both through varietal selection, the process of floor malting and how we kiln the malt – which can produce the most flavor. We are experimenting with varieties specifically developed to grow well in the Sacramento Valley. In phase 2, in 2-5 years, we intend to start crafting specialty malts.

5. When homebrewers start building a recipe, they start with the base malt. Will a homebrewer really notice a difference in the finished beer if they went with a craft malt over the larger commercial maltsters when it comes to a base malt?

Admiral Maltings: Absolutely. Malt is the soul of beer. One can cover it up to some degree by using pungent hops or other additions. But the core of the beer flavor, our malt, will be unmistakable. 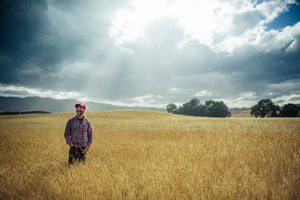 6. I have looked in the past to buy malt from craft producers (not local), but it was cost prohibitive. Do you see the availability of craft malt making it to some of the larger homebrew suppliers/stores?

Admiral Maltings: I am not sure what is “cost prohibitive.” Most definitely our product is a premium, small batch, handcrafted product. It will cost more than a mass produced product.  But it should be similar in cost to other organic or other premium malts such as Marris Otter.

7. I think many homebrewers don’t put much thought into who the malt producers are when they are at the local homebrew store.  Is there any type of education or promotion planned to introduce, or help homebrewers use these types of products?

Admiral Maltings: We will definitely tell our story of locally sourced, sustainably grown grains malted traditionally by floor malting. This is our story, and we will definitely include that story on our packaged malt. It will be communicated to whoever purchases our malt.

8. How are things progressing with Admiral Maltings, when do you expect to have your malt available for sell?

Admiral Maltings: We expect to make our first batches of malt in late May or early June and have it available shortly thereafter. 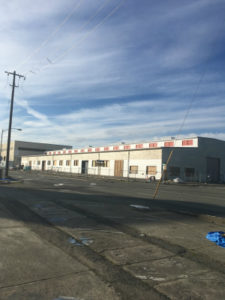 9. The Idea of having a restaurant that is incorporating your malts in different products is a fascinating concept. Do you have a date for opening?

Admiral Maltings: We hope to open the pub by September 1. The goal is to offer some 20 different craft beers made with our malt at the pub. We will also offer high-quality artisan cheeses, charcuterie, fermented vegetables, salads, and sandwiches.

Admiral Maltings: We are reintroducing a model from pre-prohibition times when most breweries had their own malting facility or purchased their malt from a local maltster that sourced their grains from local farmers.

If you want this type of product more available on the homebrew level, I think it starts with us, the homebrewer. Talk to your local homebrew supply store and see if they have the ability to order grain from a local of craft maltster. Talk to your local homebrew club. Maybe a club purchase would be a large enough to order direct. Lastly, do some research to craft and micro-maltsters in your area. Check out this link for (insert link) for some great information on craft and micro malting.

All Photos Provided by Admiral Maltings

Ron Silberstein: In 1996 Ron opened ThirstyBear Brewing Co. and is its founding brew-master.  ThirstyBear Brewing Co. became San Francisco’s first and only CCOF certified organic brewery in 2007.  It is now the longest operating brewery-restaurant in San Francisco.  Ron, a “retired” attorney, graduated from the inaugural class of the American Brewers Guild, Craft Brewing Science and Engineering Program and is a graduate of the Malt Academy at the Canadian Malting Barley Technical Centre’s (CMBTC).  Its intensive Two Week Practical Course on Malt and Malting Barley is the only such program in North America. He is a founding member of the San Francisco Brewers Guild, sits on its board of directors and obtains brewery and industry sponsorships to fund SF Beer Week.

Curtis Davenport: Curtis has a background in organic farming and for the past three years has focused on developing a supply of unique, high quality, California grown grains for brewers and artisan bakers.  Curtis grows malting barley and wheat, and in 2013 he designed and operated a trial malting system to produce malt for breweries in Southern California.  As Head Maltster, Curtis will oversee the day to day malting operations of California Craft Malt.  Curtis earned a B.S. in Environmental Biology from Westmont College and is a graduate of the Malt Academy at CMBTC.

Dave McLean: Dave is the founder/brewmaster of Magnolia Brewing Company, which he opened in 1997 at its original Haight-Ashbury location as Magnolia Pub & Brewery. Today the company also operates a production brewery and second restaurant/bar, Smokestack, in the Dogpatch neighborhood. In 2006, Dave opened Alembic Bar, a craft cocktail bar, and restaurant that is currently expanding.  He is also a founding member of the San Francisco Brewers Guild and sits on its board. Dave was part of the original team that started SF Beer Week and has also helped organize beer programming at events such as Slow Food Nation, the Eat Real Festival and Outside Lands Music Festival. He is a graduate of the UC Davis Master Brewers Program (1994) and is a diploma member of the London-based Institute for Brewing and Distilling.