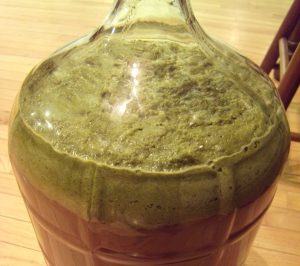 Dry hopping is one of the easiest techniques for introducing bright aromatics to your brew.It’s simple, right? Just rack your beer to a secondary vessel, then throw in your hops for however long you want, and then you have aroma-city. Or is that really the best method?So there I was, reading my monthly BYO magazine, when I received a paper cut on an article that explained a totally different dry hop technique that involved adding your “dry hops” to the beer during the primary fermentation, and in return you would smell and experience more hoppy aroma!

Here are some small excerpts from the article:

“Another is to dry hop before the end of fermentation. …this gives the yeast an opportunity to enzymatically liberate aromatics and convert others. As an added benefit, adding dry hops while fermentables remain ensures that yeast will metabolize most of the oxygen introduced.”1

“What is happening during this enzymatic reaction is the release of a glycoside. These are relatively common, with one study of 150 plant species finding glycosides two to five times more concentrated than their volatile aromatic molecule.’2 No specific studies exist for hops but we can assume it is within this.” 1

The coolest thing, or at least to me me is that for hops, “[the] glycosides are found on the vegetative material.” 1

…and not the precious hop oils we always look for. It’s important to note that only leaf or pellet hops can you convert and release the glycosides. Hop extracts, for obvious reason, will not produce the same results as their is no plant matter.

So after reading all that, doesn’t it sound kinda cool? Makes you want to do a side to side comparison with the traditional technique and the new one.

Add hops into a secondary vessel after primary fermentation has ceased, and allowing them to soak in the beer for a couple of days.

During your first fermentation stage, or primary fermentation, we dry hop at the last .004 points of fermentation before terminal gravity is reached.

So a side by side comparison is exactly what I did!

I’ll tell you how it went down.

I choose to do a refreshing 5.5% IPA using only cascade and centennial, 2-row and a pinch of Cara-60. Simple, but delicious. The recipe is as follows: 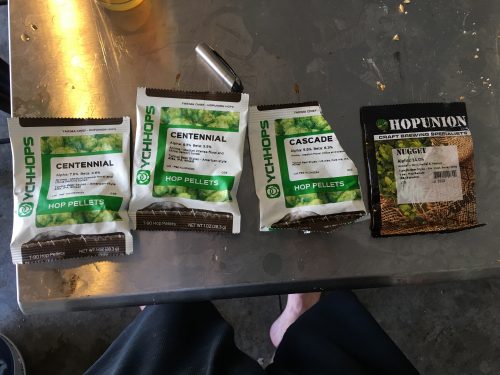 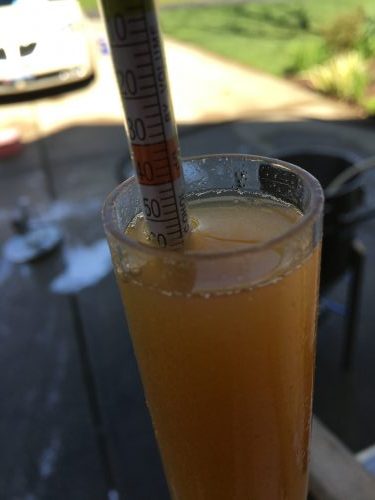 For beer A, I gave it the traditional dry hop technique:

Beer B was given the primary fermentation dry hop. No secondary.

You might be asking how I could know what the last .004 of a fermenting beer could be?

To figure it out, I did a simple technique called a forced ferment test which would tell me my FG before my actual beer had finished.

In order to conduct a force ferment test, simply pitch the yeast into your wort, and shake your fermentation vessel. After the foam settles, sanitarily collect 1000ml of wort. Place the sample into a flask and place on your stir plate in a warm area.

After approximately two days, check your gravity with your hydrometer, and voila! There’s your finishing gravity. 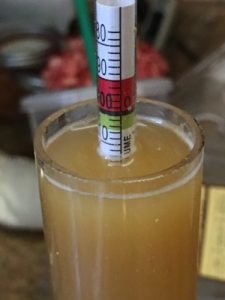 When the beers finished fermenting, they were both kegged and carbonated to a CO2 volume of 2.3. I then used my beer gun to take a few samples. I took them to a few local breweries in town where the professional brewers agreed to a blind “smell” test.

Each brewer was given two glasses. One with beer A (secondary dry hop), and beer B (primary fermentation dry hop), and were told to choose which beer had the better hop aroma.

Their remarks are as follows:

Out of both beers, he chose B, which was dry hopped during the primary fermentation. He responded by saying beer A had a very grassy aroma, whereas beer B had a well rounded character that complimented the malt character, while also having a “blast of hops” upon the first pour. 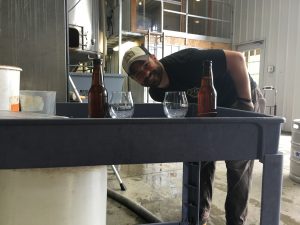 He had a similar response to Brewer 1, stating that beer B had a cleaner, more balanced aroma that blended nicely with the malt character, and that it had a distinctly piney aroma.

He favored beer A, stating that he enjoyed the grassy “in your face” aromatics the beer contained. As for beer B, he found that it was very aromatic but missing the grassy character.

He too favored beer A, stating that he perceived a higher intensity compared to B. He mentioned it reminded him of a West Coast style IPA: raw, and grassy. He said there was a fruity character to the beer as well; however, no one else perceived this attribute. 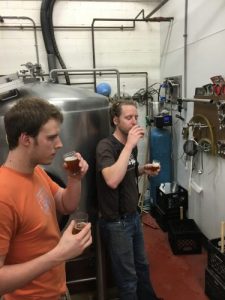 Dry Hop Experiment Results
Well ladies and gentleman, we have a tie! (Unless you ask me, then it would be beer B).

Overall, the brewers who liked beer A did admit liking the aromas of beer B and vise versa, but each were still confident with their choices, even after learning which beer were which.

My take on this method of dry hopping

I’ve decided through personal experience prior to this experiment — and even more so after this — that dry hopping during your primary fermentation is the better of the two techniques.

I will admit that it is more of a hassle since you need to more closely monitor the fermentation, but I feel the extra work is worth it!

In conclusion, it seems this showed more of personal preference in the aromatics presented to each brewer. As each one said the hop aromatics were high and intense for both beers, there must have been a small characteristic each person favored over the other beer.

Does anyone reading this article dry hop during their active primary fermentation? Or do you prefer to wait after all fermentation has ceased to then add dry hops?

If not, give this a shot and let me know what you think!

I’d like to mention that I have produced even stronger aromatics when using yeasts other than my Cali, house strain. These particular yeasts included London 3,  English ale, “ Brett- like” Trois-  or WLP- 644, and Brett Anamolus.