Cold Brew Coffee,…. with Nitro Anyone?

I’m going to show you how you can make it, package it, and serve it so you can have it on hand at home all the time.

I’m Martin Keen and normally I’m brewing beer in my videos. But today I want to show you how to make the stuff that’s coming out of the fourth tap in my bar. That is the wonder of cold brew coffee served on nitro. I’m going to show you exactly what you need to do to get Nitro Homebrew coffee at home and we’ll start with what I was up to yesterday. 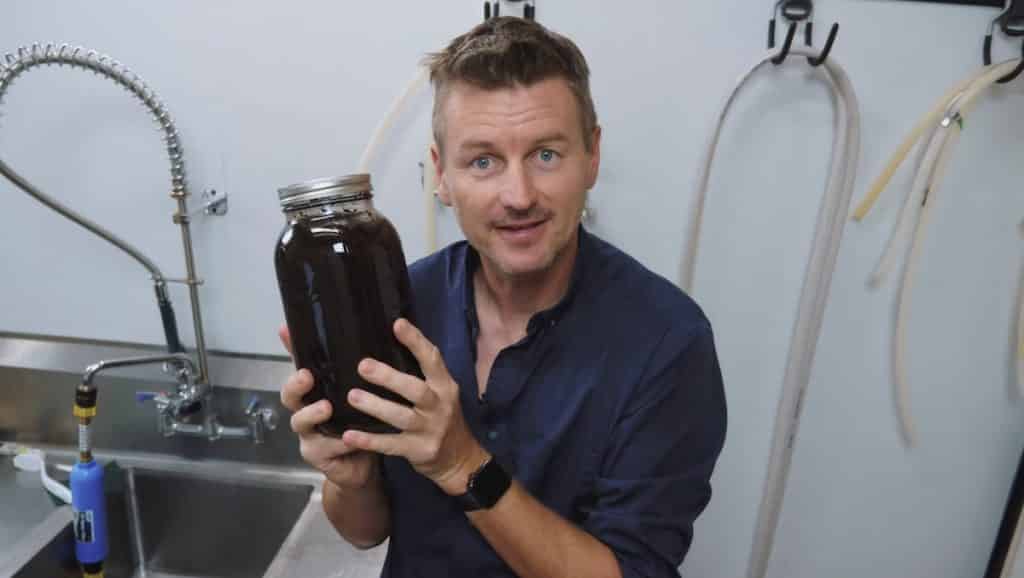 Now there are all sorts of gizmos and gadgets you can buy to create cold brew coffee. But honestly the easiest way that I’ve found is just use Mason jars.

So I have here a two 64 ounce Mason jars and that’s all I use. Now in terms of the coffee to use, there are all sorts of um, sort of dedicated cold brew type coffees you can get. I’m using this from cold brew labs right now and what you really want to go for though is something with extra course grinds or something that would be suitable maybe for a French press. 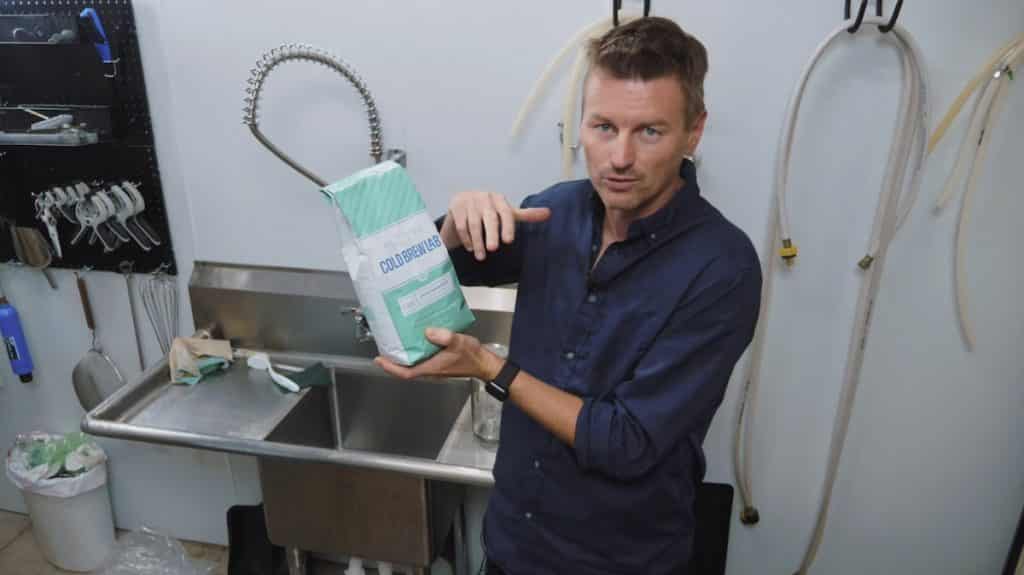 I didn’t have much luck finding this in the grocery stores, so I ended up buying this one online. Hey, you want to go for roughly a 4:1 ratio. So something like this that’s actually not 0.8 pints. I’m not super precise about this. I just sort of measure it out. So it’s close to just being a little bit under one pint and then it’s good enough for me.

So that’s just the case of adding the water. It is recommended you use filtered water. Fortunately, I have my little RV water filter here, so let’s put this into the coffee.

With the lid screwed on, give it a bit of a shake, make sure that the water and the coffee are all combined. Now we need to get these cold. Fortunately I happen to have one of my fermentation chamber chest freezers here that’s a currently cold crashing one of my beers. Just going to store them in here. They will stay in here for about 15-20 hours. If I remember about halfway through, I’ll give him a shake.

But yeah, nothing to do now. But wait. 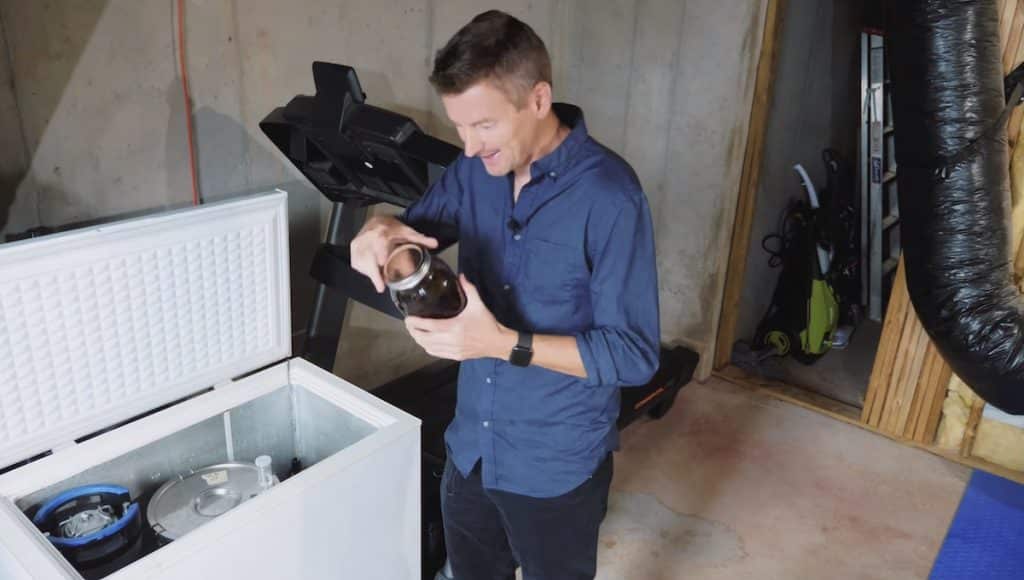 That’s that should do it. That’s about 22 hours in the fridge. The next stage is to separate the cold brew coffee from the coffee grinds. The filtering. I do in two stages, starting off with my trusty brewers Civ. So this will just pour the coffee through here, catching the grains. There we go.

Then I rinse out that Mason jar with my high-speed bottle washer.

Now at this point, the coffee is mostly filtered, but there’s probably still a few grinds in there. So I am going to run it through a second filtration. So we’re going to place this pour over on top of the rinsed out Mason jar, add my coffee filter into the pour over and then pour the coffee back in. 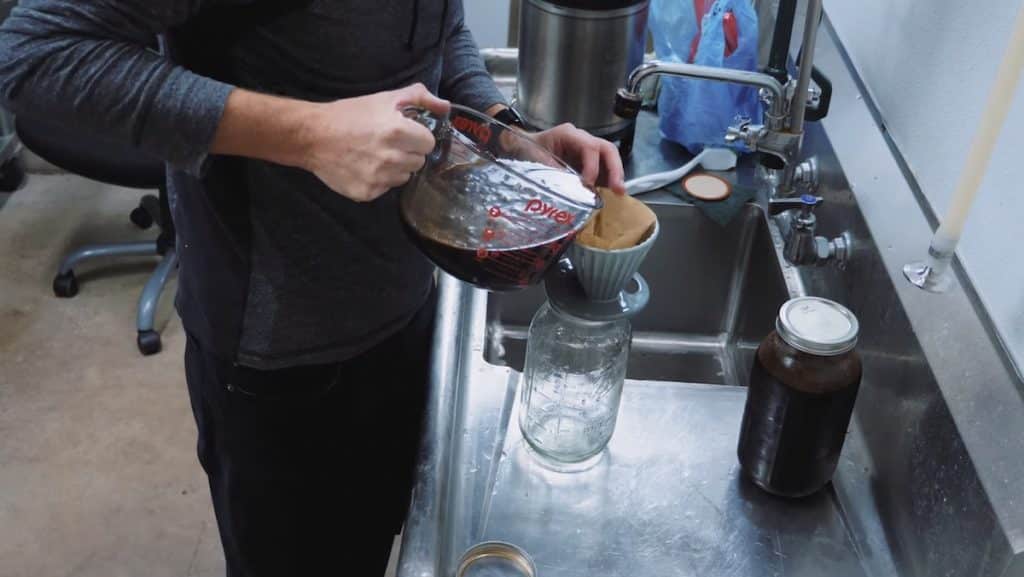 So after that, each Mason jar has yielded about two and a half pints of cold brew coffee. So at this point the coffee’s made and it’s actually a good idea to just give it a little taste before proceeding further. Technically, this is really considered cold brew coffee concentrate at this stage and you could elect to water it down a little bit.

I’m having none of that. This is going in as is.

Now here’s where it gets pretty interesting. I think I’m going to package the cold brew coffee in this 2.5 gallon corny keg. Now if you’re packaging beer and serving on nitro, you do so using something called “beer gas.” Beer gas is 75% nitrogen and 25% CO2 and you would sort of partially carbonate the beer with CO2 first. Then you’d use the beer gas to serve it and it’s going to come out fizzy.

With cold brew coffee, you don’t really want to use any CO2. That’s going to lead to some pretty unpleasant off flavors. So you just want to use pure nitrogen, not beer gas. So the first task for me was finding somewhere that actually sells pure nitrogen “N2” rather than beer gas.

So I ended up going to a welding shop just outside the airport and they were able to supply me with a 20 cubic feet canister of pure nitrogen N2. Now the challenge with using pure nitrogen is it doesn’t really dissolve into liquid very well and we need it to do that in order to get that sort of foamy mouth feel that we’re expecting from a Nitro cold brew.

How Do You Make Nitro Cold Brew Coffee?

So to do that, I have a gadget. This is the quick cascade nitro coffee keg lid. And what it has is a carbonation stone on the end of it and a port at the top to accept a nitrogen gas post. So what happens is you will plug in your nitrogen gas post into here rather than its usual spot in the corny keg.

The nitrogen will go all the way through this tube and then come out through the carbonation stone, which will be submersed at the bottom of the keg and that will maximize the amount of nitrogen that’s actually getting into the liquid….That’s getting into the cold brew coffee. 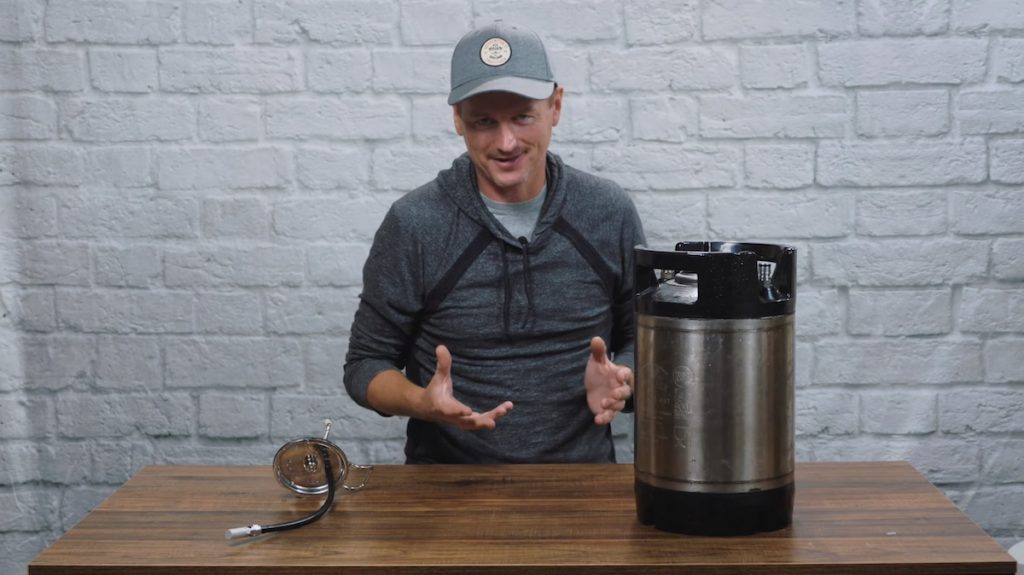 The first step to this is to sanitize the carbonation stone by placing it in some boiling water for a couple of minutes. When that’s done, sanitize the whole keg with some starsan.

Add the cold brew coffee into the keg and replace the lid. (Same with the portable uKeg Nitro version)

So this is my nitrogen regulator connected to my nitrogen stream canister. I’ve set the PSI to about five and I’m going to first of all just purge the keg. So just do that by connecting my gas post on the keg here to this and just pull the relief valve a couple of times. And that way we can get the oxygen out of this thing.

With the keg purged are going to move this onto the post on the quick cascade lid. And now we’re going to be sending nitrogen in through the diffuser. I’m going to dial up the pressure in this regulator just to sort of 5 PSI every couple of minutes until I get to my target PSI, which is about 35 – 45 PSI. And all of this nitrogen of course, is running through that diffusion stone.

So now I’m up to 36 PSI and I’m going to leave it right there so can put this to the test. So I’ve connected the liquid outpost here, put this in the kegerator. 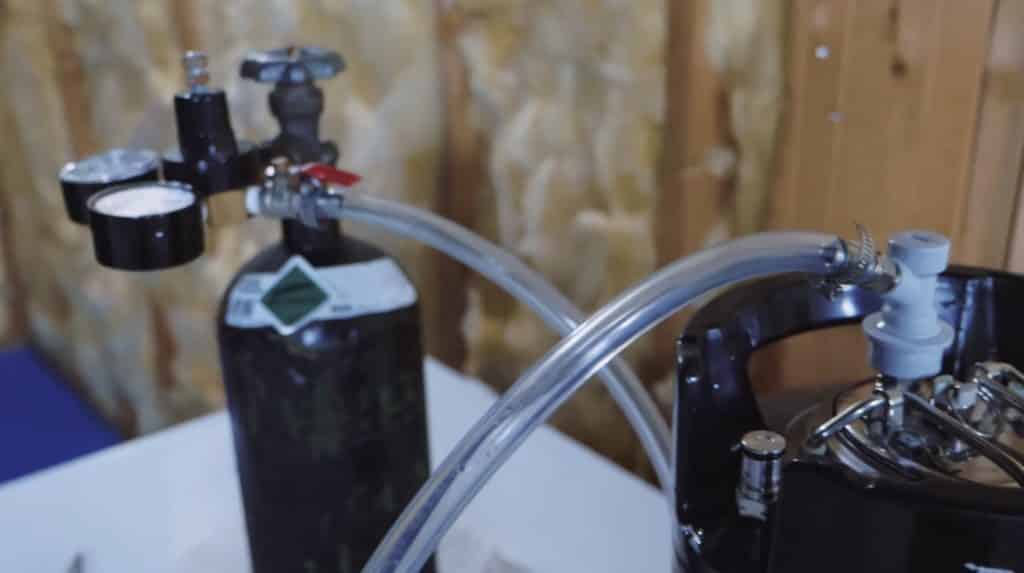 I serve the coffee through a stout for set. This is the same thing you’d use for a nitro beer. And this little beauty is the result.

Now, if you’ve not had true nitro cold brew, it’s very different from regular cold brew because you really get that creamy mouthfeel a much like you would with a nitro beer.

And it tastes so smooth. 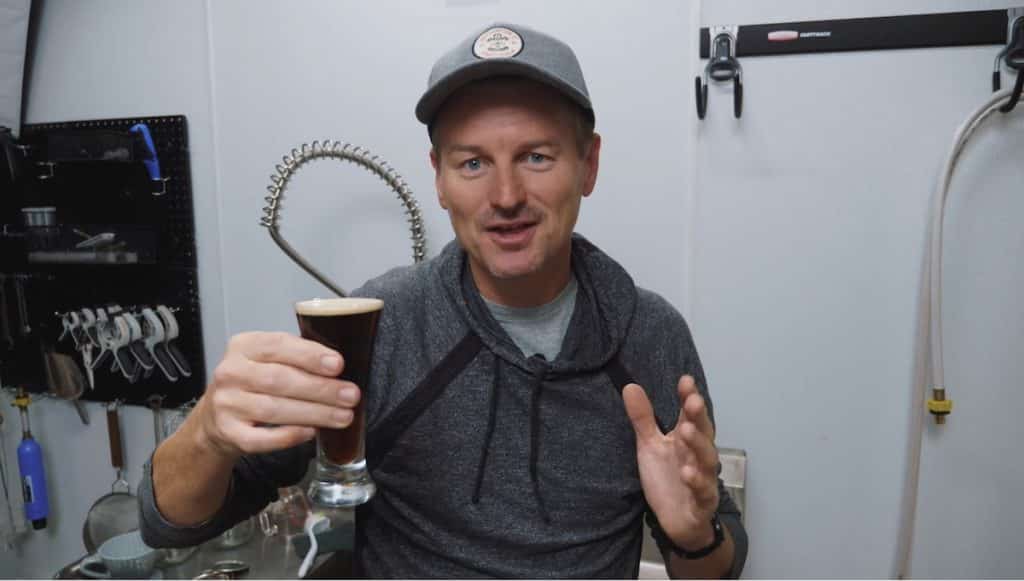 Normally I finished my videos with cheers!. I don’t know what the, uh, the appropriate thing with coffee is. So, um, cheers!