One thing that bothers me about home brewing is the wasted water.  With all the cleaning, rinsing and chilling, there is a lot of wasted water.

In the past few months I have really tried capture as much of the water from the wort chiller as possible, and use it for final clean-up. However, after I fill about 5 large buckets of water, my storage capacity is full and the wort is only chilled to about 100 degrees.

Since my system is 100% gravity I have never really considered using a plate chiller. Without the aid of pumps, I don’t really think a plate chiller is the way to go.

Although gravity might work fine for chiller, cleaning and sanitizing the plate chiller with just gravity might be very difficult and time consuming.

I have tried placing a large coil of water hose in an ice bucket with the hopes of chilling the ground water, after a few attempts it did not prove to be very effective. So my next test was to use recirculating wort chiller. 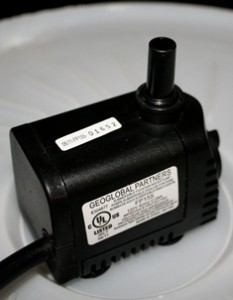 A few of my friends have used this method (or a version of) with some success.  Not wanting to invest  a lot of money into a test project, I went to the local hardware store and purchased a cheap submersible garden pump for about $25.00. The pump is low flow/low PSI and the tubing just pushes on for easy set-up and cleaning.  I set the pump into a 5-gal bucket filled with water & ice, about 50/50.

Because the pump is not that powerful, I tried to make sure the bucket and brew kettle were close together and at the same height. I have now brewed 3 times using 3 variations method:

As I get ready to brew my 4th batch using this new cooling method I plan to incorporate both method #2 and #3 in hope that I can save money and water, cut time off my brew day and chill my wort both quickly and to a yeast pitching temperature. So this is the plan;

Since the pump I bought is only a 100-155 GPH I expect that I will upgrade to a slightly larger pump soon. This is allow me to get the water through the system a little faster and the pump will be a little more forgiving as to the location and elevation. Would you go this route compared with an immersion chiller?