It seems every tap list these days includes some type of fruited beer. IPAs, Blondes, Belgians, and who knows what’s next?

As a homebrewer, I’ve brewed my share of fruit themed beers. Peach Saison, Strawberry Porter, Mango Blonde and Cherry Stout. The one thing in common with all those beers is I used fresh or frozen whole fruit.  But what about infusions, extracts, and purees?

Homebrewers have the luxury of brewing small batches where adding fresh fruit is pretty easy. Whether you’re hitting up the local farmers market and picking up a few pounds of seasonal fruit or picking up a bag of frozen fruit at the store, it’s an easy way to bring a new flavor to your beer.

Pro brewers, however, have the challenge of brewing a consistently flavored beer that is both cost effective and easy to process.  Buying fresh fruit is both costly and the flavor can vary. Not to mention the amount of beer loss that comes with the removal of the fruit before packaging.

Natural infusions may be the answer 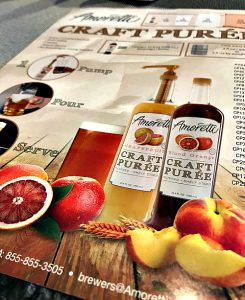 Amoretti has been marketing their fruit flavorings to professional brewers for the last few years. In fact, rumor has it they provide the fruit flavor to one of the biggest selling fruited IPAs in the country (think fish). But how do these flavors taste in beer? Real or fake?

A few of the biggest differences between real fruit and infusions is the stage in which the brewer adds them to the beer. Depending on the brewer and recipe, real fruit can be used at any stage.  Infusions generally go into finished beer, by adding them to the bright (serving) tank, keg or even right in the glass when poured at the tap.

The California Craft Beer Association puts on one of the best beer conferences/beer festivals I have ever attended, the California Craft Beer Summit! For the past two years, Amoretti handed out samples. I dropped the ball two years ago and didn’t use the sample. This year, I decided to check out these flavors and I picked up the following samples to play with:

My base beer for all the additions was my homebrewed Helles. I think the Helles make a great canvas for the flavors to come through.

One thing to note before I get started: these products are highly concentrated. For example, the infusion ratio for the Wild Strawberry is 7 to 14 oz per 10 gallons of beer. I did my best to put the correct ratio for a single beer. 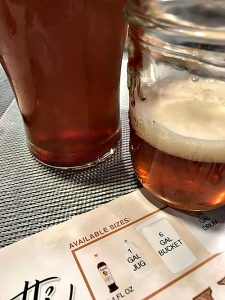 I poured about 4 ozs of beer and added the fruit flavoring. Then, I poured the remaining 8 ozs. I stirred the beer until there was no visible, unmixed flavoring. I tasted the beer cold and let it warm up a bit.

This stuff is thick and doesn’t mix well in the beer. For this one, I warmed it up a bit to see if it mixed better. Not really. I didn’t want to cook it, so maybe I didn’t get it warm enough.

Taste – A slight astringency has been added to the beer. Way more strawberry on the nose than the flavor. Not sure I would really want to drink a pint of this.

Color – It made the beer a bit darker, and cloudy.

Best Use – Blonde or Cream Ale. I could see using this in small amounts just to get a mild hint of Strawberry. 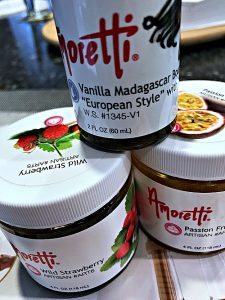 No heating. Just as thick as sticky as the Wild Strawberry.

Aroma – By far the sweetest beer I’ve ever smelled. Tropical sugar is the best description.

Taste – Much better than it smells. Doesn’t add the astringency like the strawberry. Pretty drinkable if you like a sweet touch.

Color – Cloudy and a bit darker.

This product goes right into the glass as you pour the beer.

Taste – Mimosa with a little too much pith in the taste. The pithy taste goes away really quick and leaves a really nice orange flavor.

Color – The head went to a red/ brown hue.

Best Use – Wit or dry hopped IPA. Most drinkable so far.

Aroma – First off the extract smelled really artificial.  I make homemade vanilla, so I might be a bit jaded. The beer smells oxidized, which is really weird. The aroma is just plain odd. I get the vanilla, but I also get an interesting sweetness.

Taste – The vanilla flavor comes in the taste pretty well, but I don’t think it works well by itself.

Best Use – Maybe a big Stout at packaging to add a little dimension to the beer.

Final Thoughts on the Amoretti Flavorings 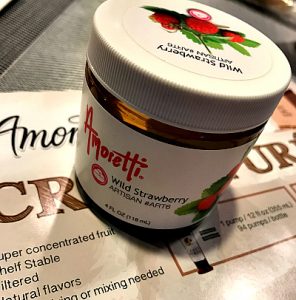 Easy – Not sure adding fruit gets any easier.

No beer loss – Zero beer lost with these additions.

Seasonal fruit – No problems with fruits being in season or ripe.

Overpowering – The flavors could overtake the beer very easily.

Trial & Error – This process could be very time consuming to get the right amount of flavor. 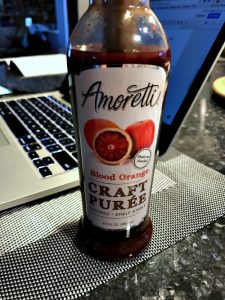 These are good products when used in the right way. In my opinion, these flavors make a better accompaniment to a fruited beer rather than using them alone in a non-fruited beer. They can really add a bright fruit aroma that could highlight a heavily dry hopped beer.

A cool experiment would be to split a 5-gallon batch and try adding different amounts of the same flavoring to each. This would be a good way to see how flavoring amounts impact the drinkability of each one.