For the last several months, Hop Water has grown in popularity. This is the new zero calorie, zero carb, zero alcohol, refreshing beverage that some breweries are coming out with these days.

One Saturday afternoon, I was walking the isles of my favorite liquor store. In my pursuit for cutting calories and overall better health, anything 5% ABV or lower was on my radar. A couple four-packs of Hop Water did find a way in my cart.

The Pioneers of Hop Water

H2OPS in Anaheim, California were the pioneers for Hop Water. Owner, Paul Tecker is a long-time homebrewer and craft beer enthusiast. He has been involved in the natural and organic beverage industry. His love for hops caused him to think outside the box when coming up with H2OPS. Check out Tecker’s website here to find out where you can find his product.

Against the Grain Brewery and Smokehouse in Louisville, Kentucky are also succeeding with Hop Water. Brewer, Jerry Gnagy, started carrying a hop seltzer water in the brewery/smokehouse. Gnagy added hops and sometimes even hop oil and made it available to employees only at first. Gnagy does add some caramel color as to give the impression one if drinking a beer.

Gnagy then took this tasty beverage to Extreme Beer Festival in Boston on Feburary 1st and 2nd. He was looking for some feedback from the public as this was the first time he served it.

Lagunitas Brewing Company in Petaluma, California also began making this hoppy beverage as a way to help worker productivity. In the past whenever employees were drinking beers while working their shift, they would become too tired to work. Head brewer, Jeremy Marshall, came up with solution that really took off in the brewery. 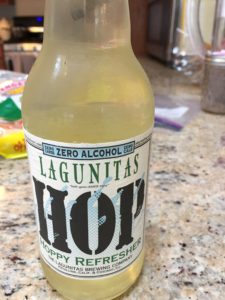 Interestingly Lagunitas only served Hop Water to their staff. Initially it was for free, even when customers were able to consume it. After a while, customers were required to pay a few dollars for a pint. After all, those beer hops can be expensive.

The Benefits of Hop Water

My Own Hop Water Experiment

I brewed a beer earlier in the week, so I knew I would not be brewing this past weekend. I figured this would be the ideal time to hammer out a quick Hop Water. I purchased some distilled water from the grocery store and began heating up my water on my stove.

I followed Clawhammer’s recipe and proceeded to boil my water and maintain the boil for ten minutes. I then chilled it quickly to 170 degrees.

The Hydra from JaDed Brewing in action.

Since I was using distilled water, I needed to build up my water profile. I followed my same water profile for a yellow, hoppy beer found on BeerSmith.

Brewing salts weighed out and added to the water.

My hop of choice was Amarillo. Hops were left to sit in the water for 20 minutes. For years I have raved about Amarillo hops being my favorite. With its high citrus (lemon, orange, and grapefruit) flavors and aromas, this hop has ended up in many of my IPAs and Pale Ales over the years.

Amarillo is an old favorite hop of mine.

This certainly has been a welcomed addition to my weekday beverage of choice. I also enjoy a nice bottle of hop water while drinking a beer in order to hydrate properly. Check out some hop water today. You will not be disappointed.

My own Hop Water served up in my favorite beer glass from Werk Force Brewing Company.