7 Ways to Filter Your Hops

Fresh hops are a beautiful sight, but after a 60 minute boil they’re a big green pile of gunk. Most homebrewers filter them out for a variety of reasons.

Filtering the hops will clarify your homebrew and cause you less trouble in your fermenter. During a vigorous fermentation, the hops can clog a carboy and plaster themselves to the sides, leaving you a nice mess to clean up.

Also, if you are using an external chiller like a plate chiller, then you don’t want to send hop debris through those small pipes.

Homebrewers have come up with numerous ways to filter hops, and here are 7 of the most common: 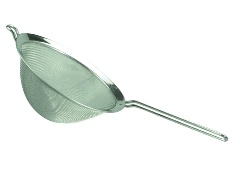 On our first brew day, many of us frantically grabbed one of these from the kitchen cabinet to catch all the sludge that was pouring into our beer. At least I did. The mesh strainer is the simplest solution to filtering hops and it’s very likely you already own one. They’ll get the job done, but if you are brewing alone it can be a pain to hold the strainer in place and transfer the wort.

They also work better with whole beer hops. Pellets are especially sludgy and will quickly clog the strainer, causing you to run back and forth to the sink to do the ole’ wrist flick.

The hop bag and mesh strainer are the two most common filtering methods. The cheaper hop bags are muslin and the more expensive ones are nylon mesh. Hop bags do a great job of filtering, but the knock against them is decreased hop utilization.

Many homebrewers have found that these bags cut down on the hop character in their beer, so many prefer to let the hops “swim free.” The bags also have an annoying habit of coming open in the boil unless you tie them like a boy scout. The Brew in a Bag movement has taken on a life of its own in the brewing community as well.

This is a more recent contraption that I discovered from the creative bunch over at HomebrewTalk. The benefit of this device is that it allows the hops to swim free but still does a good job of filtering.

When the boil is over, you simply remove the filter and all the hop gunk is inside. Here’s how to build your own Hop Spider.

Another cheap and simple solution, the copper scrubber works well if you have a pickup tube on your kettles. You can stick one of these puppies on the end of the tube and it will filter out most of the hops.

This device is often used in conjunction with the whirlpool method, where the wort is stirred to collect the hops and other sediment in the middle of the kettle. Then the wort is sucked out from the side of the sediment with the pickup tube (and scrubber). 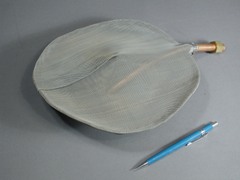 The hop stopper has gotten good reviews. The biggest draw back is that it’s expensive, at $60 plus shipping. Unlike the bazooka screen, it will suck up almost every last drop of wort.

This is a great option for filtering, but because of the price it may be better as a DIY project.

Although more common in mash tuns, bazooka screens are also used as hop filters in boil kettles. These are notorious for clogging with hop pellets, so if you use one, make sure you use whole leaf hops. MoreBeer has a related product called a kettle screen that’s replaced their bazooka, but apparently the pellet issue is still a problem. They also leave behind wort because they are slightly elevated. 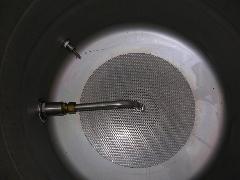 A false bottom is a metal perforated disk that allows liquid below but keeps solids on top. So basically, a screen. Like the bazooka screen, false bottoms are common in mash tuns but can also be used for filtering hops. Also like the bazooka, they work best with whole hops.

Personally, I use a combination of the mesh strainer, hops bags, and whirlpool + Chore-Boy.

It really depends on what I’m brewing, what I’m tinkering with, and what I feel like doing at that time. I must say though, I’m looking forward to trying the paint strainer method.