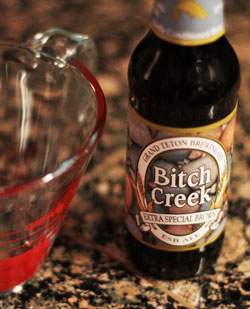 It doesn’t always take a growler-full when cooking with beer. Sometimes just a dash will do. A small amount of the “secret ingredient” can leave your guests mystified and delighted. What IS that!?

Here is a simple recipe for beer caramelized onions:

Slice the onions about 1/4″ thick. Reader tip: If you slice a lot of veggies, especially onions, I highly recommend a V-Slicer

. I was able to cut all 4 onions to a perfect size in under a minute. The possibilities are endless with this thing.

Melt the butter and oil in a non-stick skillet over high heat. Stir in the salt and brown sugar. Add the onions and stir often for 5 minutes. Turn the heat down to medium-low and cook for at least 40 minutes. Yes it takes that long but it’s worth it!

When the onions are fully browned, pull the skillet off the heat and stir in the beer. Don’t add so much beer that it turns into a sauce, but don’t skimp on it either. I found 1 tbs to be the sweet spot but a little more wouldn’t hurt.

Let’s talk about the beer for a sec. I went with Bitch Creek Extra Special Brown as seen in the picture above. It’s a great beer and added some nice toasty flavors to the onions. It’s a more bitter brown ale so you might want to use something more balanced towards the malt, but since I didn’t cook the beer it didn’t make the onions overly bitter.

I decided to eat the onions with pork chops made with homemade bread crumbs. It’s a great combination, but you the onions will go well on many things. How about getting really hard-core and putting them over beer brats?

You can even store them in the fridge for about a week.