A Chocolate Milk Stout Recipe for Those Cold Winter Days

I’m not the conventional beer drinker. Some like to think winter time is for darker beers, but I still enjoy lighter fruit beers when the temperatures drop.

However, not everyone is weird like me, so here is a chocolate filled stout you can really sink your teeth into. Whether it be after shoveling some snow or a day at the rink, this beer is better than any hot winter beverage.

This beer is full of chocolate flavor. This can be accomplished using specific specialty grains, however, I like to give the beer a little more punch by aging it on cocoa nibs after primary fermentation. The key to soaking cocoa nibs is to extract their flavor. Some people like to bake them first, but I found that a good soak in vodka does the trick. Also, the lactose gives a good sweetness to it.

I cold steeped the dark grains for 48 hours (Carafa1, Pale Chocolate, Chocolate Wheat, Crystal 120). This helps make the beer smoother at a faster rate instead of having to allow if to age. Check out the technique. 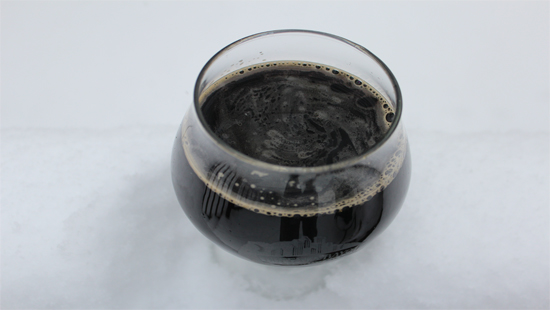 If you are looking for a roasty beer with hints of dark chocolate, this is it. You could also add lacto sugar in the boil to produce a nice Milk Chocolate Stout. I have brewed this beer a bunch of times and it was an instant hit. I recently brewed a 5 gallon batch for a buddy’s wedding and it did not last the night. Brew it up and let me know how it goes, hopefully you will enjoy it as much as I have.

Here’s a link to the brewing recipe without the chocolate part: Milk Stout Recipe