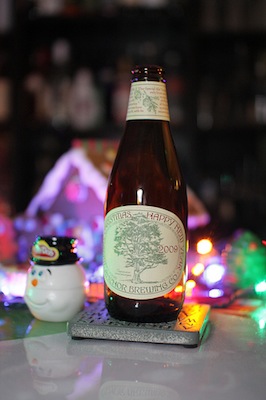 The first week of winter is here and if you’re like me, you’ve been a bit of a bum lately.

With shorter days and the cold Denver air, my beer consumption has been slowly rising along with my waistline. In fact, I almost always drink more beer in the winter.

The reason is that I spend more time indoors. Winter means cold, and cold means I’m not out hiking or running where I don’t drink beer. Ok so maybe I do drink beer when I hike, but I am unusual dude.

Rather than fight the inevitable, let’s embrace it by welcoming the winter and the holidays with some great seasonal beer.

Winter beers are a comforting light during these dark days. The seasonal beers that hit the shelves are exactly what I’m in the mood for when the weather sucks. They are dark, malty, and boozy.

In my mind, there are two main categories of seasonal winter beers:

Winter beers are traditional beer styles that happen to fit well with the season. That is, beers that are good during winter. Malt is the showcase while the hops hibernate until spring. A winter beer is rich and complex. It should be sipped by a fireplace or a 47″ flat screen with the game on. Typical winter style beers are old ales, stouts, barley wines, scotch ales, and smoke beers.

Now here’s the thing – many breweries take these traditional styles and brand them as Christmas/Holiday beers. They could take the label off and it would still fit into a traditional style category. Take Bell’s Christmas Ale for example which is labeled as a Scottish Ale on Beer Advocate. I’ve had it and think it tastes more like an amber, but in no way is it different for Christmas.

I hate to sound too cynical because I really do enjoy the festive branding. It’s a fun time of year and I’m glad beer joins in the party. Just know that just because it’s a winter or Christmas beer doesn’t mean that the beer itself is any different than usual. Brewers need to market like everyone else.

Christmas beers are the spiced beers we normally associate with the season and are primarily of the Winter Warmer style. Actually, from a pure style standpoint it’s the other way around because the Beer Judge Certification Program recognizes a category for Christmas Beers but not Winter Warmers, although that Christmas beer category is very vague. The Brewers Association recognizes neither in their style guidelines. Many of what we consider a winter warmer actually falls into the English Old Ale category; these are usually not spiced.

Best to relax, don’t worry, have a homebrew, and not get caught up in this style mumbo jumbo.

Spices/adjuncts that are typically found in winter warmers are nutmeg, cinnamon, allspice, orange peel, ginger, maple syrup, and cloves. I like these beers in limited amounts but overall prefer a traditional style from category #1.

Find one in your area

Enough background, time to drink. I’ve listed some choices of winter seasonal beers to try, organized by region so you have a good shot at finding them. Each region has a traditional beer style that makes a good winter beer and a Christmas Beer from the winter warmer style:

Even though winter has just begun you’ve probably seen these beers on the shelf already. I know I’ve been drinking Hibernation for a few months. Overall though, I try to drink the seasonal beers when the season actually arrives.

Call me crazy but seeing people drink pumpkin beer in July really pisses me off.

So now that the real winter season is finally here, let’s celebrate with these great brews and worry about our waistlines when beach season arrives.

What winter seasonals from your area have you enjoyed this year?