If you were in need of a beer and a few friends to relax with, Cheers was a place you could count on. Granted they weren’t too big into the microbrews in the show, but it doesn’t matter. The TV show Cheers embodied the local watering hole where “everybody knows your name.”

Outside of TV Land, many of us have or have had our own Cheers. Maybe it’s a college bar, or maybe it’s a restaurant where you’re a regular.

For my beer buddy Sean Cook, it’s a bar at his alma mater – Clemson University. So as a guest post today, here is Sean’s story of his own Cheers.

If there is a joy greater than having a tall pint of your favorite brew, it has to be having it with friends, in your favorite watering hole. This has been true for me ever since I was in college, back in the days when I had no idea what a good beer really was (hint: Michelob Light doesn’t count, even if it costs a quarter more.)

Even before I was 21, when I was flaunting the law and sneaking into bars back at Clemson, where I went to college, I had a favorite place. When you are young, your standards are lower (for beer and for bars). It’s equally about the challenge of getting into a place, as well as having a few beers.

For me, the novelty and challenge wore off quickly when I got my third fake ID, which was as good as you could get, had my actual picture on it, and well, got me in anywhere and everywhere I wanted to go. It was then that I began to really explore what different bars had to offer, and I found my first favorite place: Nick’s Tavern and Deli.

Nick’s is a Clemson landmark. It’s been a fixture downtown since the 70s and since I was in college (at least) it has been owned and operated by Ken and Esther Revis-Wagner. Ken was my biology professor freshman year, but he didn’t know me back then. I sat way back in the 300-seat auditorium because he had a habit of actually engaging with his students, and in no way did I want to get on that radar screen. (Hat on, head down, just tell me what’s on the test, brother!) 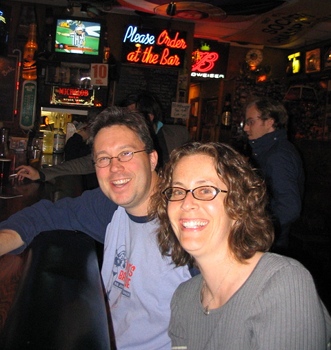 Every college town has bars that are easy to get into underage. Nick’s is not one of them. They have always had a lot of graduate student and faculty regulars, and Esther in particular is known to be a tough, no-nonsense gal. I saw her kick many students out for trying to pull a fast one, so I kept cool and kept my head down there, too. I just wanted a couple good cold ones, and some of their fried cheesesticks.

Finally, after I became legal, I came out from the shadows and reintroduced myself to Ken and got to know Esther, too. Ken in particular connected with me during my time in grad school, when I wrote for the student newspaper. I was into better beers by then, and we bonded over good brew and good music. Later, when I got into homebrewing, I’d bring by some of the latest.

These days, when I get back to Clemson, I do my best to visit two places: home, and Nick’s. I don’t drink Michelob anymore, but I still order the cheesesticks. Ken and I talk beer. I still think Esther’s a pretty tough lady, but these days she scares me a lot less. I scan the collection at the back of the bar for some of my homebrew bottles, and I make myself at home.

Sean Cook is a Life Purpose and Career Coach based in Athens, Georgia. Before starting his coaching practice, he spent over 15 years working in higher education. He has been brewing beer on and off again for 18 years. Read more from Sean at HigherEdCareerCoach.Com and HigherEdLifeCoach.Com

So do you have a bar or a restaurant where you’re a regular? What is your Cheers? Tell us about it down in the comments.