As homebrewers, we know what makes good beer. That awesome combination of barley, hops, water, and yeast keeps us coming back for more. However, beer is but one of many libations that we enjoy. Where do the rest of the liquors come from, and what can we learn from them? Let us explore the world of liquor. 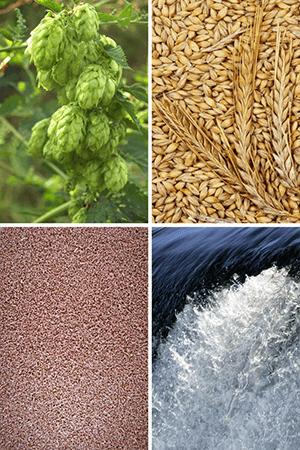 Ok, so this can’t be a list of alcohol and beer not be included! Oh yes, the intoxicating (pun intended) combination of hops, barley, water, boiled together, and fermented with yeast keeps us coming back for more.

However, beer styles also include a host of other signature ingredients, including wheat, Belgian candi sugar, fruits, and even salt!

There are also souring agents than can be substituted for the yeast, or used in addition. These include brettanomyces, lactobacillus, saccharomyces, and pediococcus.

Beer is a multifaceted and multi-language affair. How many varieties have you been introduced to? 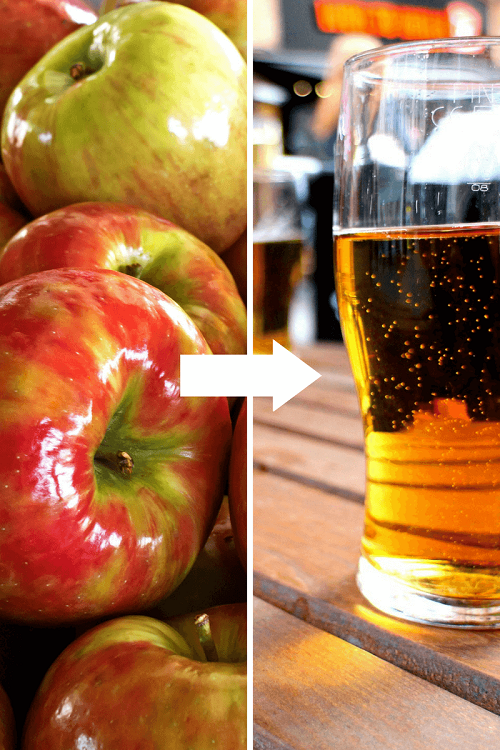 No reason to lose your cool! Cider is fermented apple juice. Yep, I said it. Ok, so there is a little more to it than that.

Cider is made primarily from cider apples. These are crushed and the juice is collected into vats. Then yeast is added and fermentation begins, but kept at 40-60 degrees.

After primary fermentation ends, the cider is racked into new vats, but completely to the brim. Secondary fermentation then occurs, creating a natural carbonation. Sometimes cider makers may add additional sugar at this point. The whole process is about 3 months long, but the end result is worth the wait. Here’s actually how to make hard cider. 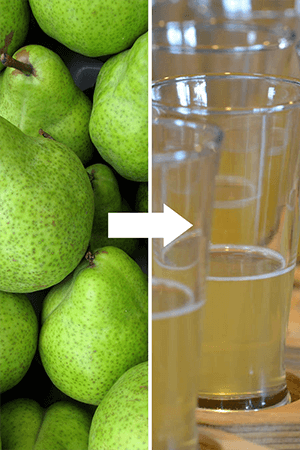 I’ll admit, this is a new one to me. It’s a fermented beverage made from pears. However, don’t call it a pear cider!

Western England grows perry pears, which are picked and crushed, similar to a cider. The juice is then fermented from the wild yeast that is found on the outside of the pears.

The thing that really sets perry apart from ciders is that the pears have to have aged after being picked to a specific maturation state. Also, perry fermentation includes the same malo-lactic rest that red wines have, to allow the tannins to mellow out. 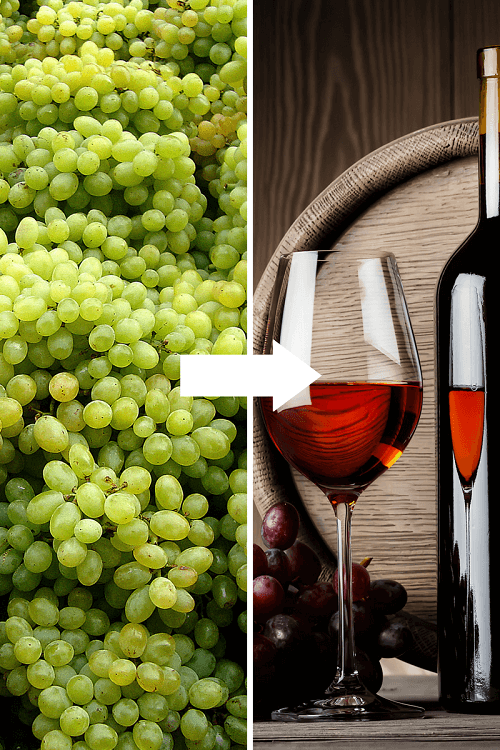 Wine is a fermented beverage made from, primarily, grapes. Red wines include the skin of the grapes during initial fermentation. Whereas white wines only use the juice that are pressed from the grapes, and it’s skin and flesh are discarded. Fermentation occurs either from the yeast that naturally grows on the outside of the grapes, or yeast strains can be added to the juice.

After initial fermentation of around 2 weeks, then the red wines go through a malo-lactic conversion, which converts the malic acid in the wine to a smoother, lactic acid. Then, the wine is either stored in stainless steel before bottling or, in the case of most red wines, aged in oak barrels for several months to even 20 years. 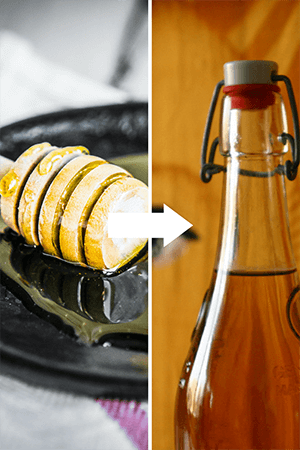 Mead has been around a long time, with production throughout Europe, Africa, and Asia well into ancient history. Mead is a liquor made from fermenting honey and water at its core. Meaderies today also add various other fruits and botanicals to dress it up a little.

Honey is mixed with water to create a sugary liquid, not unlike unfermented juice from grapes used in wine-making. The yeast used is nearly identical to strains used for wines, specifically white wines. After primary fermentation is complete, it is racked into secondary fermentation to allow further time for the mead to clear.

Mead is traditionally served flat, like a wine, although some newer meaderies have begun to carbonate their mead, which has been an interesting and refreshing addition.

There is also Melomel, which is mead made with fruit — delicious stuff. 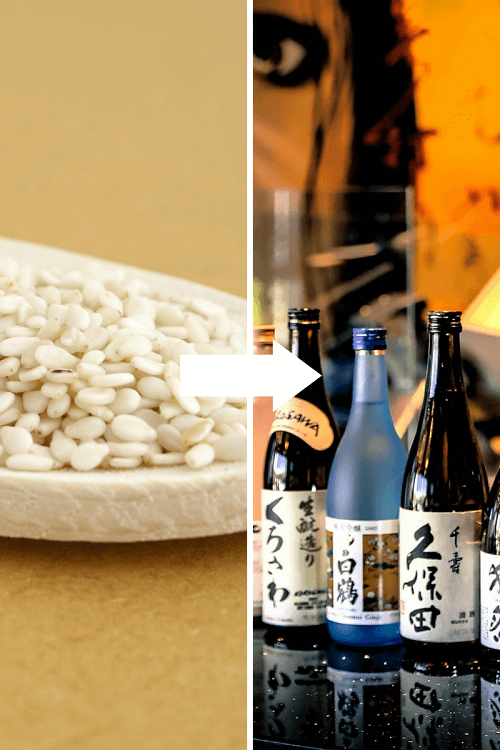 Sake is a type of wine made from rice. Yep, you heard right, rice. Rice is polished to remove the hard outer layer of the grain. Then the grain is allowed to rest while it pulls in moisture, and then steamed to create a conversion of the starch to sugars. Sounds familiar doesn’t it?

The steamed rice gets some mold (Aspergillus oryzae) added and fermentation begins. After 5-7 days, water and yeast (Saccharomyces cerevisiae) is added. This mixture is kept at 39°F for 7 days and basically becomes the starter. Over the next four days more steamed rice, fermented rice, and water are added, and the final mash ferments out. 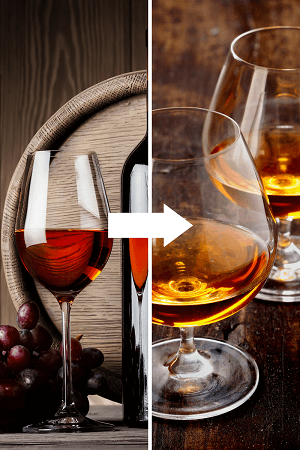 Distillers will take wine or some other fermented fruit juice, and begin the process of removing the water (generally by boiling in a still). The evaporation leaves a more potent liquor that can be used as is or with a little bit of aging in a used whiskey barrel for that caramel color and complex flavor. 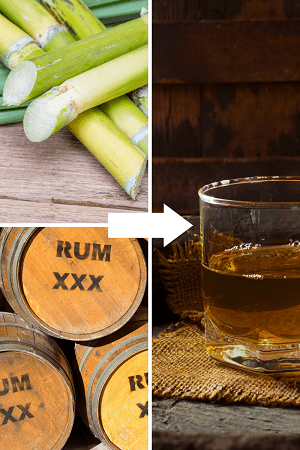 Avast ye matey! This seafaring spirit usually hales from the Caribbean and Latin America on this side of the globe. Rum is made from fermented sugarcane or sugarcane products, such as molasses. Then that fermented nectar is distilled, as spirits generally are, and aged in oak barrels. 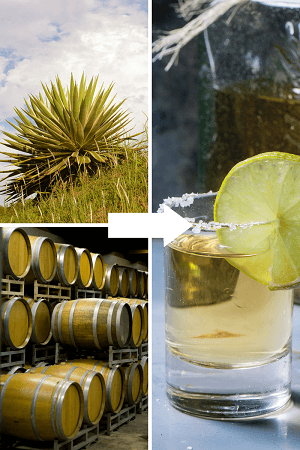 One hopes there is no wall big enough to ever stop this hombre. Tequila finds its way to the States from south of the border. Mexico has its Bordeaux region, if you will, in Guadalajara and Jalisco.

There a grand plant known as the blue agave plant, or agave azul, thrives in its native environment. The blue agave sugars are then collected and fermented.

After fermentation, a distillation process occurs, and you end up with “Silver” tequila. Silver tequila can then be aged for a short time (reposado) or a longer time (añejo), and will end up clear to golden in color, depending on the amount of time aged.

Mezcal is similar to tequila and also comes from the agave plant, but there are significant differences between the two. 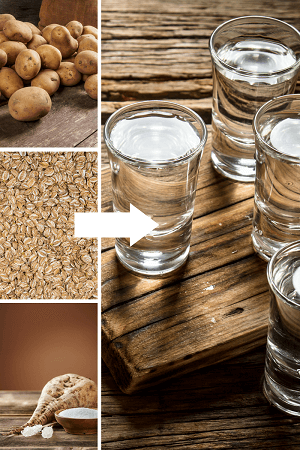 Everyone’s favorite fermented potato beverage hails from Russia, Poland, and generally northern Europe. However, vodka is not just made from potatoes, but also can be made from corn, rye, molasses, even sugar beets!

Sugar-rich plant matter is then distilled and filtered. The final product of vodka is then charcoal filtered to remove off-flavors. The more filtered, generally speaking, the smoother the vodka. 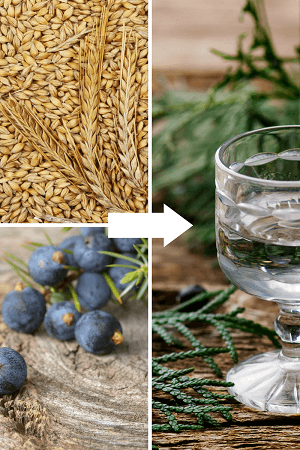 Cheerio, my good man! One of my favorites, gin is the product of distilling a fermented grain mash, such as barley, and adding juniper berries during the second distillation process. Juniper berries look like blueberries, but are more of a cone than a berry. Then the gin is aged in wooden casks. 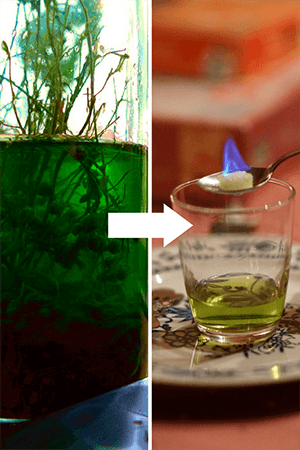 I can’t think about absinthe without thinking about Edgar Allen Poe. All that raven ever wanted was a pour of the wormwood. Absinthe is is product of green anise (think licorice), sweet fennel, and other botanicals, including the Artemisia absinthium otherwise known as “grand wormwood”.

These botanicals can be added with a base alcohol and distilled, similar to gin. The chlorophyll from the botanicals end up dying the spirit that trademarked green. However that is not the only way absinthe is made.

There is also a product known as cold mixed absinthe, where the same botanicals are mixed with commercial alcohol, however no actual distillation occurs during the process. This is considered lower in quality than traditional absinthe, but it is readily found on the market. 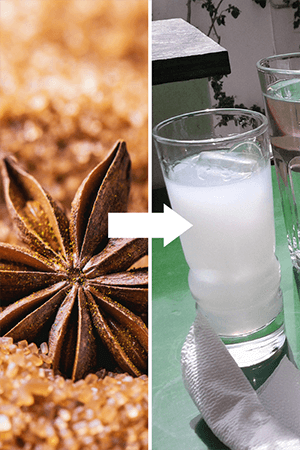 Opa! Hailing from Greece, Ouzo is an anise-based aperitif. This means it’s traditionally served before a meal.

Ouzo starts with a neutral alcohol fermented and distilled from grain, corn, grapes, sugar beets, sugarcane, tuber, or other fermentables. Then anise is added for that unmistakable aroma and flavor. This results in “flavored ethyl alcohol” or, better named, ouzo yeast.

The ouzo yeast is further distilled and remixed until you have your final ouzo. Surprisingly, this is a clear product. How does it get that frosted, hazy look then? It’s because the essential oil of anise, anethole, isn’t water soluble. Throw clear Ouzo over ice or give it a few drops of water and it hazes right up, giving you that signature ouzo white presentation. 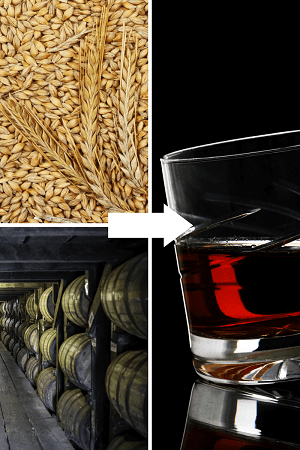 Finally, the man with many hats. Whiskey considers Scotland (Scotch whisky), Ireland and the United States (Tennessee whiskey and Kentucky Bourbon) its home.

Whiskey can be made from a variety of grains & fermentables, including barley, rye, maize, or even wheat. Part of the mash can even be soured during fermentation! Eventually though, whiskey will be distilled to get a higher alcohol percentage.

It will then age for various amounts of time in either stainless steel or charred oak barrels. Bourbon, in particular, will change greatly in color, aroma and flavor depending on the amount of time it sits in barrels, and how heavy of a char on the barrel there is.

This is a beer blog, so why in the world are we talking about spirits and wine and other boozes? Mostly because we love anything fermented.

But there are a couple practical reasons, too. For one, mixology is a big thing now. Mixing beer and spirits into a single cocktail can be done right, but it’s good to know what you are mixing. Rye IPA’s and good rye bourbon makes for a spicy delight. However, with the spiciness of the rye bourbon, my palate leans toward an IPA with more botanicals and less citrus.

Another reason to learn about various liquors is to enhance your brew game. Tennessee whiskey sour mash? How about trying to brew a Kentucky Common? Gin barrels for a Farmhouse ale? Yes, it’s delicious!

As you prepare your next recipe, why not take a page from the liquor book? You might be surprised at the results.