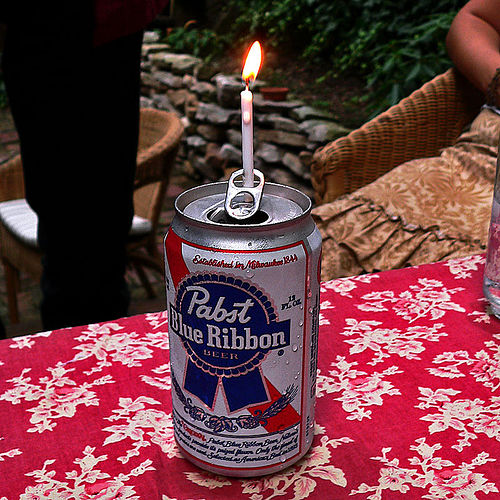 The family was invited for an evening shindig. We planned music, loads of Italian food, and of course, beer.

As Dr. B, my girlfriend, and I wandered the grocery store on our pre-party beer run, we approached that very familiar aisle. A decision had to be made, and I was in charge.

I’m sure fellow beer geeks have been in this situation before. You’re in charge of picking out the beer for a party with non beer geeks. You’re completely torn. You think of Ulysses Everett McGill’s famous line, “Damn, we’re in a tight spot.”

I knew what I wanted, but other people had to be taken into account. I tried to compromise. “So should we just get a light beer, like Yuengling?” I attempted.

Reluctantly, I looked up at the bright cases of Bud and Miller. Starting to panic, I quickly grabbed a 12-pack of Bud Light Golden Wheat and hurried away.

My companions laughed and made jokes about blackmail pictures. Jerks.

Here’s the thing though. I get it. I understood the situation and was cool with it, because I truly believe there is a beer for every occasion, and an occasion for every beer.

Around St. Paddy’s Day I hear a lot of beer people get up on their soap box and urge whoever is listening to drink a stout other than Guinness. Now I’ve talked at length about how there are better stouts out there, but on St. Paddy’s Day I’m drinking Guinness.

Lighten up people. While you’re in the corner of the pub bragging to a half-conscious bum about how your 19% imperial stout was aged for 17 years in whiskey barrels made from Noah’s Ark, I’ll be laughing and singing Irish drinking songs with the rest of the world, Guinness in hand. That’s part of the fun of St. Paddy’s Day.There is a beer for every occasion, and an occasion for every beer.

Some of my best summer memories are from my buddy’s North Carolina beach house where we drank Natural Light all day and skim-boarded ’til the sun went down. Age and responsibilities have made it tough to get back there, but if we ever do, guess what we’re drinking? Natty.There is a beer for every occasion, and an occasion for every beer.

Chilly night in front of a campfire? Now I’m ready for that imperial stout.

And how the hell were we supposed to play Edward 40 hands without 40’s?

I think you get the point.

Beer is an Experience Beverage

So yes, I was fine with buying Bud Light for the party. It was the right beer for that situation. As a beer geek, don’t be afraid to let your guard down once in a while. The best part about beer is experiencing it with others.

And it’s not like I didn’t break out a few homebrews to try to convert people. I am a beer vampire, after all.

What about you? Do you think there is a beer for every occasion, and an occasion for every beer? What are some examples that stand out in your life?