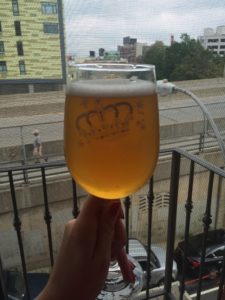 We went to the NHC Finals!

Both physically and with our beer! Sorry bitches, vaca!

So, what did we bring to the table? (Spoiler alert, it didn’t bring home gold, or silver, ok, ok, or bronze)

We created a hefeweizen called “Bier for Jaime” (that’s pronounced “hi-may”, btw) this past winter that took second place in its category in regionals, and received a score of 38. I believe that is (Jon next to me on the couch is now nodding in confirmation) our highest score to date! Woohoo!

The origin of this beer in our lineup is interesting… as it always is with us. It also isn’t the most traditional weissen as it contains a bit of lemongrass which might be the special touch that puts it over the edge. (oops)

We created this recipe for our buddy and his wife. His name is James (if you couldn’t guess). He took the name Jaime for freshman Spanish class and his friends still call him that to this day.

Every year Jaime and his wife travel to the Outer Banks of NC for a break from the crazy city. There is a brewery down there called Outer Banks Brewing Station.

This brewery makes a lemongrass wheat beer that they love! We decided to brew them a batch this past Christmas so they did not have to wait until August to enjoy a touch of the south in their mouth.

You should have seen their faces when we showed up with multiple cases of beer on their doorstep for our holiday meet up!

How’d we brew it?

To create this “clone”, we did a bit of web research, but there was very little information to go off of on the website. We had tasted the beer the summer before, a single can was all they could spare for their poor NYC friends who don’t get to go to the beach.

Since there was such limited guidance we decided to brew a tasty hefeweizen and add the lemongrass to recreate the brew. The one hint we did have was that the brewery does use Weihenstephan style yeast in their other beer, Hugh Hefeweizen, for that distinct flavor and aroma. 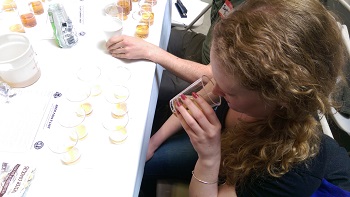 That is me judging someone else’s beer

Why did we choose to enter this brew over our others?

We are fortunate in the NYC homebrew scene to have a “pre”-competition to the big NHC first round. It is called Homebrew Alley and our club hosts it in February every year.

It is a great testing ground for NHC.

We entered our lemongrass wheat into the spiced, herb, vegetable category. Because, to be fair, that was where it belonged.

It did well, but it didn’t place or earn us any street cred.

The comments were mostly that it was a delicious weissbier with not enough lemongrass character to make it an outstanding spice, herb, vegetable beer. (Isn’t that always the case? Why do we always make beers in that category?!?)

The last time we had a beer in the finals for NHC it was also originally a S, H, V beer. (Sorry I got tired of typing that category out, you can follow along can’t you?)

We made a chestnut brown ale one year for Christmas. Ya know, chestnuts roasting on an open fire….Our friends loved it! We entered it into Homebrew Alley – the testing ground.

Our comments were almost the same, great base beer, but not enough nut character to make it a S, H, V beer. Try it in English Brown Ale.

So, we did. And we got second place in the category and went to the finals. The beer did make it to the MBOS (Mini best of Show) for the category, but that was it.

Creepiest part? One of the homebrew alley judges was the same person both times! Eek!

The most unfortunate part of Bier for Jaime’s story is that we entered the last two bottles of the original brew into NHC first round. So we had to re-brew, ugh. We made a couple tweaks based off of the notes we received from both competitions.

Here are some of the comments we received:

What changes did we make to improve based on these notes?

We also experimented with bottle conditioning the beer verses bottling off the keg. We tasted the brew both ways. The kegged version won out on flavor although the bottle conditioned version did have fantastic head retention. We decided flavor is a touch more important overall.

The last big change we made was a few water editions to create a better environment for the malts to shine. We added epsom salt and calcium chloride to our NYC water for a more malt focused brew.

Below is the new and improved recipe. We think it tastes fantastic. Can’t wait to hear what the judges had to say.